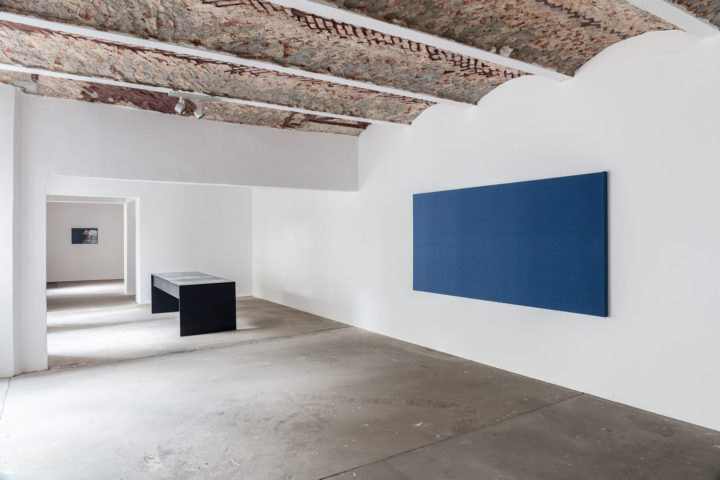 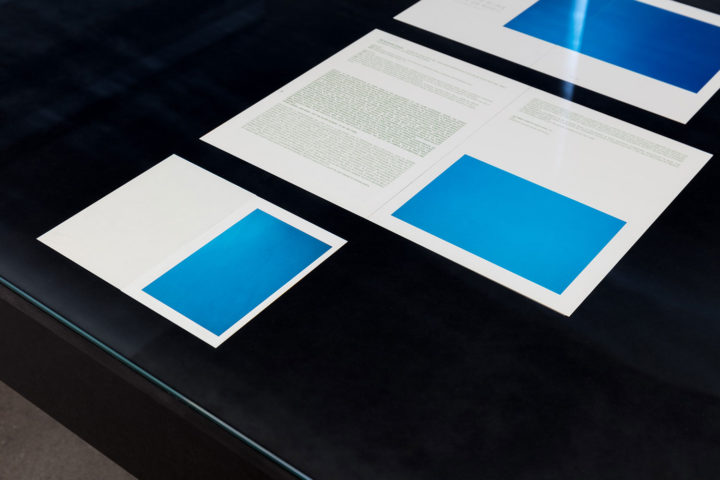 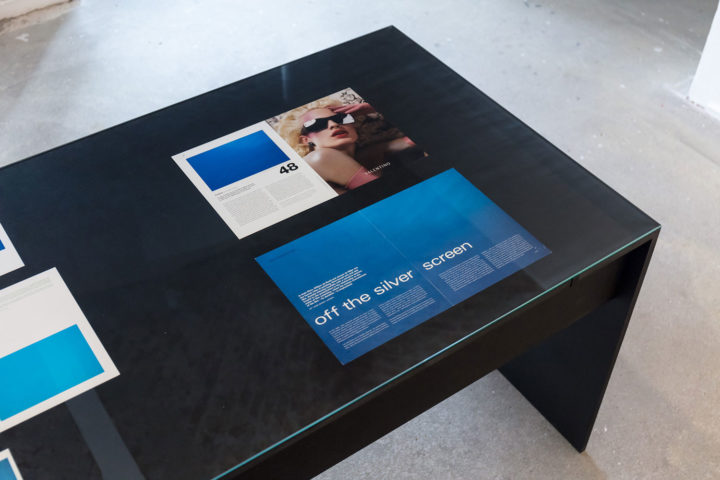 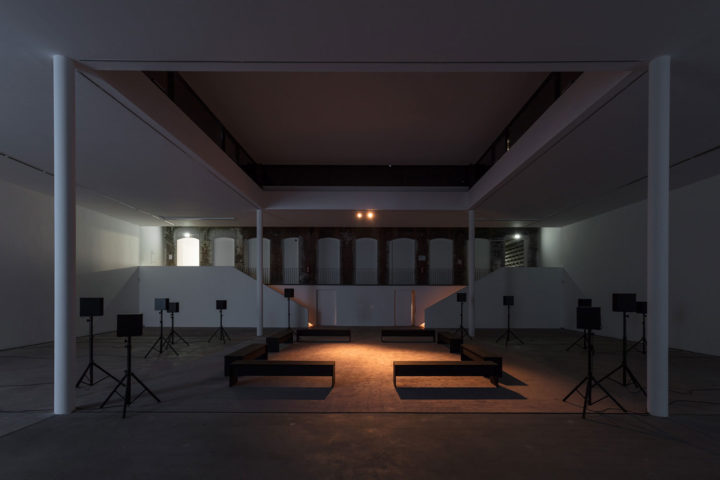 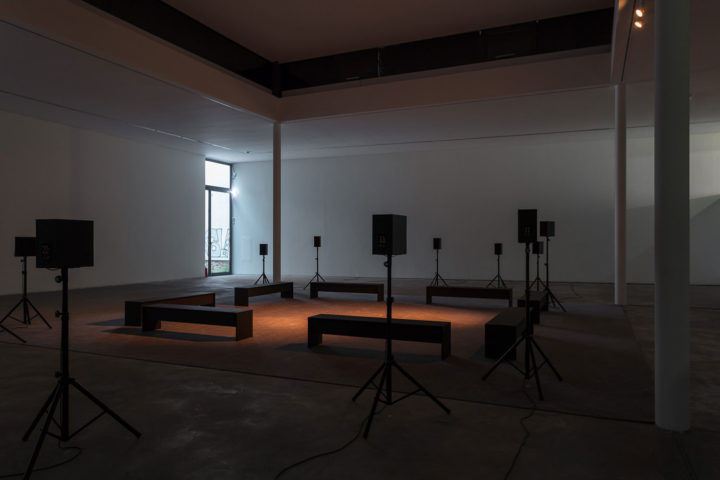 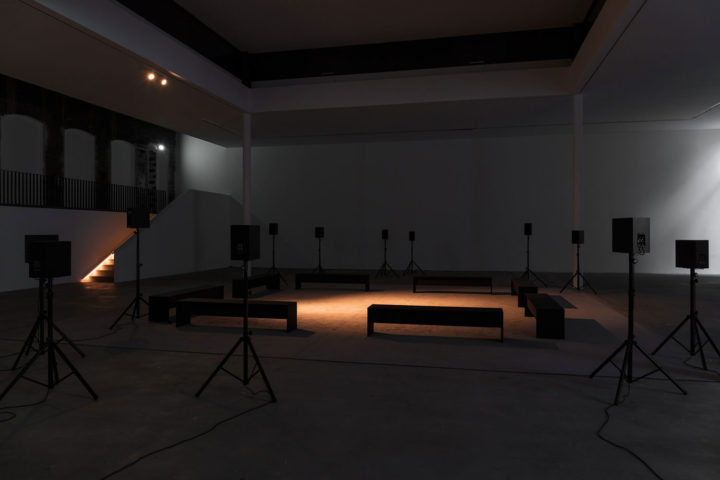 While the eyes grow accustomed to the half-light of KW’s central ground-floor gallery, the ears are exposed to the swelling cries of sled dog communities at dusk in Ilulissat, Greenland. As if from a choir, an assembly, or a scattered crowd of wailers, their howling rises up through twelve speakers positioned around a square of benches installed in the center of the hall.

Together with the 16-mm film triptych I’m Coming Home in Forty Days (1997), the sound installation Ilulissat (2014) is the pivot point of Willem de Rooij’s “Whiteout.” For this first institutional solo in Berlin after the acclaimed “Intolerance” at Neue Nationalgalerie in 2010, De Rooij has selected works from the past two decades, associating recent pieces with key works from his collaboration with Jeroen de Rijke between 1994 and 2006. The resulting constellation doesn’t purpose to survey; it instead directly addresses the passing of time between then and now as marked by the two central works, both relating to that outlying Greenland town.

I’m Coming Home in Forty Days, with its slow panoramic take of an iceberg near Ilulissat, pared down to its core elements and hovering between depiction and abstraction, is flanked by related works: the C-print Dead Seal (1996–99), the monochrome I’m Coming Home in Forty Days (2001) and various production stills from Blue Table (2004). Juxtaposed with the changeant weaving Blue to Blue (2012), these works appear to be investigations of Coming Home’s traces through space and time.

Meteorologically, a “whiteout” is a disorienting weather condition whereby snowfall or ice causes an optical disappearance of horizon and reference points. In the seventeen years between the capturing of the image and De Rooij’s return to Ilulissat to record the sound, the iceberg melted, Denmark further withdrew its political influence on Greenland, and Jeroen de Rijke passed away. Knowledge of biographical or otherwise contextual facts, however, is not required for one to become acutely aware of one’s own physicality in the spaces of this exhibition. When leaving the building one can hear the howling as if coming from its gut. Be it concerning pure beauty, (geo)politics or an abstract sense of grief, “Whiteout” achieves the maximum impact of the coexistence of reduction and abundance: in here absence is apparent, its presence almost tangible. 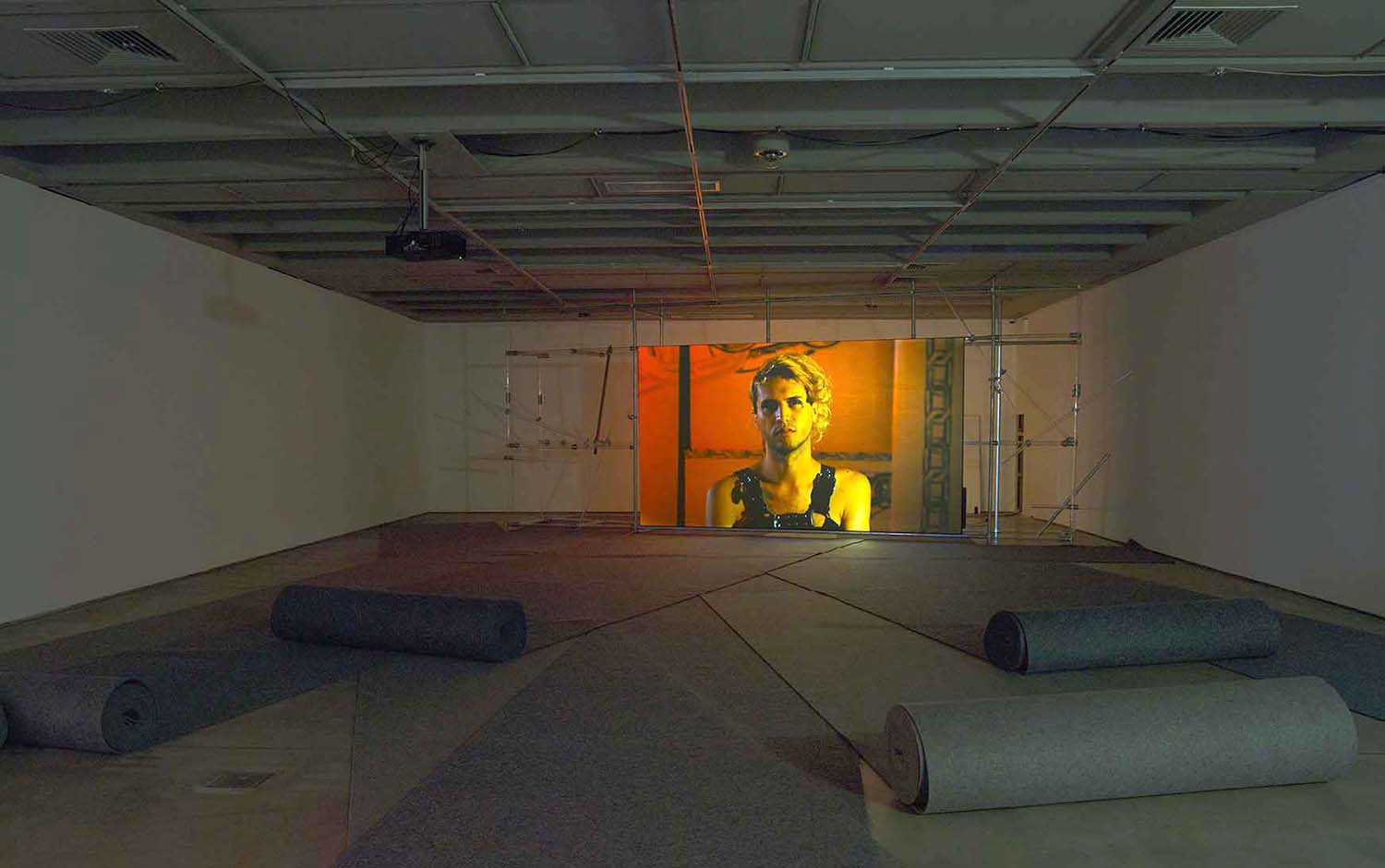 Patrick Staff’s latest film installation, “The Foundation,” takes as its subject the organization set up to celebrate and archive the…

Renaud Jerez has taken his biomorphic-cyborg-skeletons to their logical conclusion: he has given them a small world of their own.…