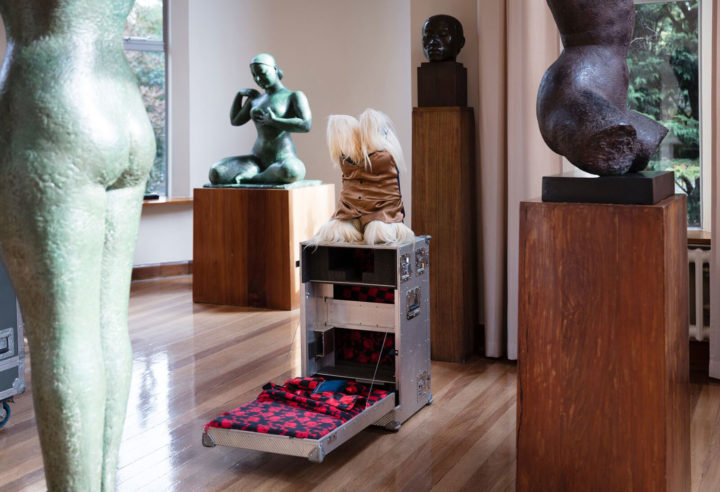 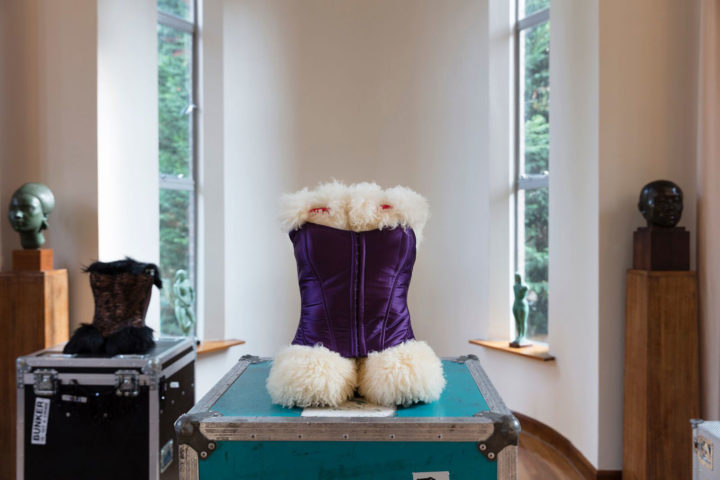 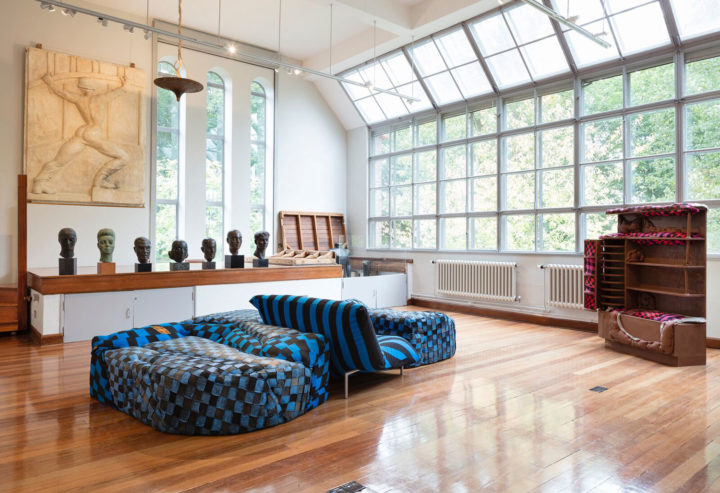 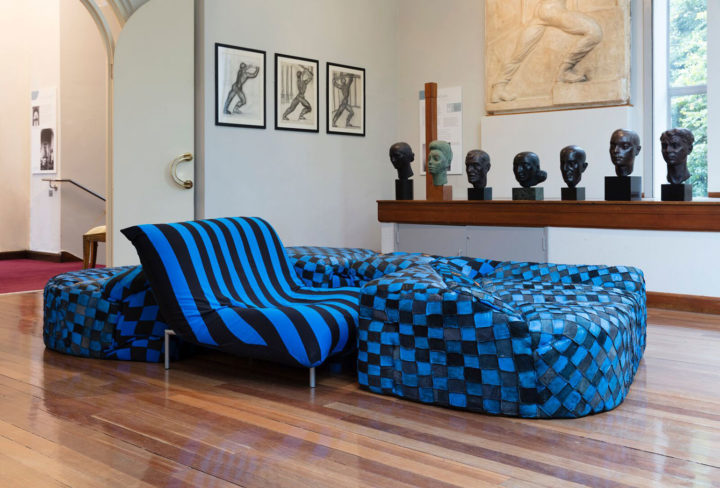 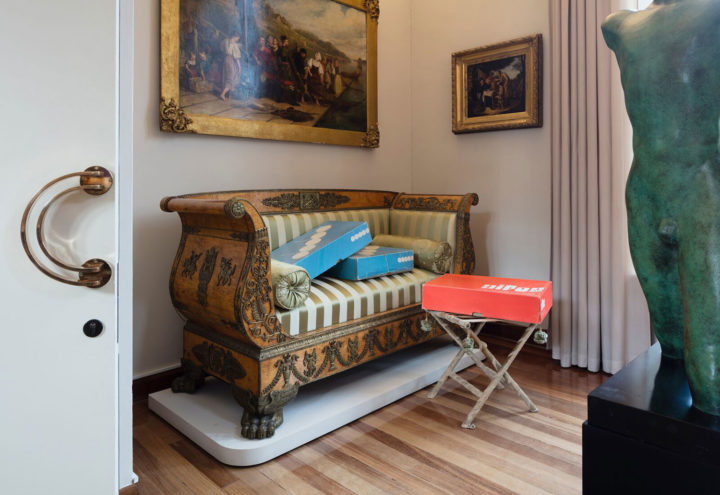 For “31 Candles,” American artists Jessi Reaves and Bradley Kronz have created sculptural compositions that introduce an informal and vibrant presence to the elegantly austere rooms of former studio and home of Russian sculptor and designer Dora Gordine.

In the bright north-facing modeling studio, a large three-part seating arrangement takes center stage, inviting one to sprawl on its painted leather and fabric upholstery. To the side, on the original modeling platform, a line of bronze heads by Gordine is placed right against the edge looking onto the room. Padded Cabinet (2017) confronts a bespoke twentieth-century modular shelving unit, whose shape it echoes. Proportions and details have been noticeably altered, layering the classic form with assonant yet disquieting elements. The surface is painted an unrealistic felt-tip shade of brown, and bulging padded areas covered in fabric challenge its functional purpose. The first-floor gallery houses collaborative sculptures by Reaves and Kronz. “Boots,” configured from pairs of vintage fur boots held in corsets, eerily resemble female torsos. Placed on stacked flight cases, these softly slumped anthropomorphic configurations mingle tongue in cheek amid elegant trapezoid plinths holding figurative bronzes by Gordine.

The unsettling cry of a baby draws viewers to the private spaces of the top-floor apartment shared by Gordine and her husband. The looped-sound piece gives voice to Gordine’s Seated Baby (1937–38), an early public commission. The sculpture, dissonant in scale and posture, sits upright directly facing Mother Figure (2017), which is placed on a luggage stand atop a long table in the dining room opposite. The curtained round windows and low lighting create an intimate and withdrawn atmosphere, strengthening the visual connection between the two works. Through the interplay in scale and the playful involvement of items from the museum collection as active elements in their displays, Reaves and Kronz invite a subtle subversion in the dynamic between the house as exhibition space and its domestic dimension, opening moments of spontaneous dialogue between its present and its past. 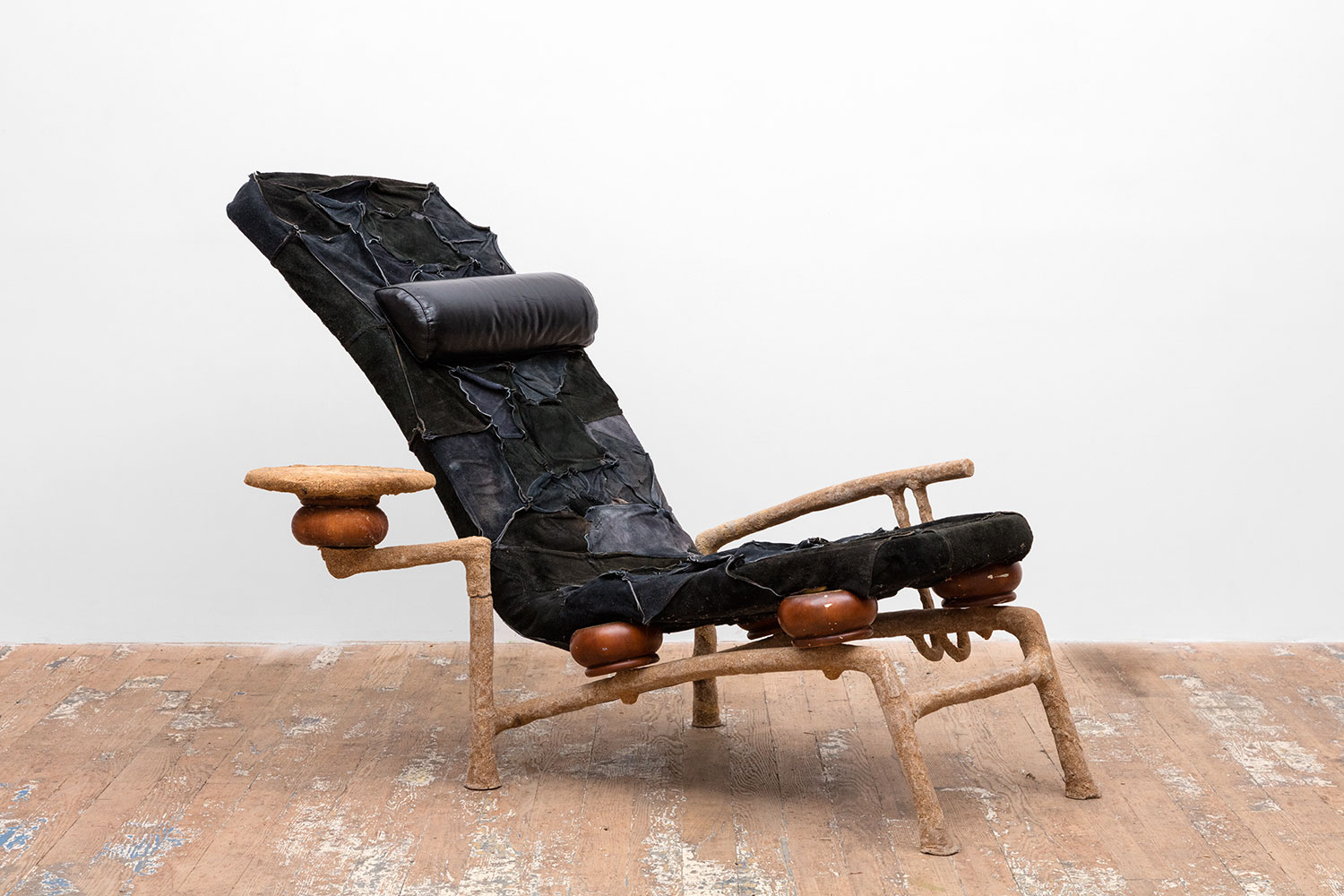 Anyone Knows How It Happened (Headboard for One) (2016), is the most formally straightforward work in Jessi Reaves’s solo exhibition…