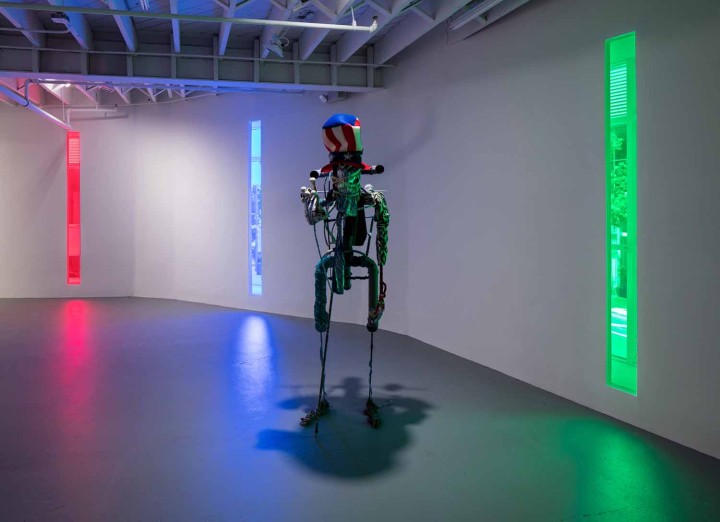 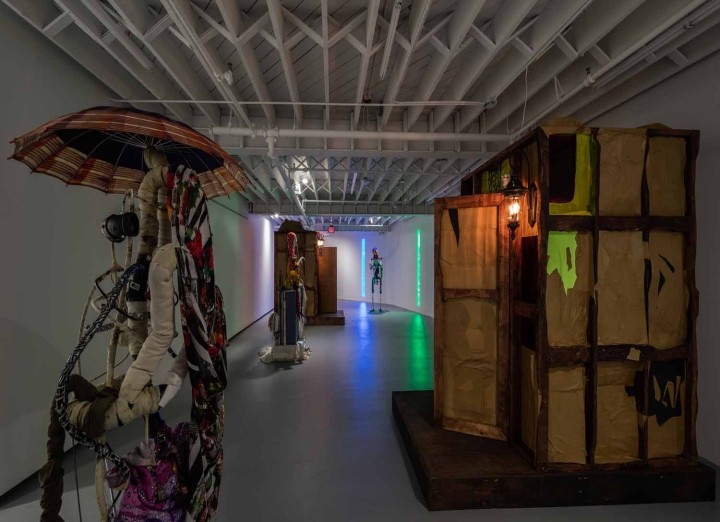 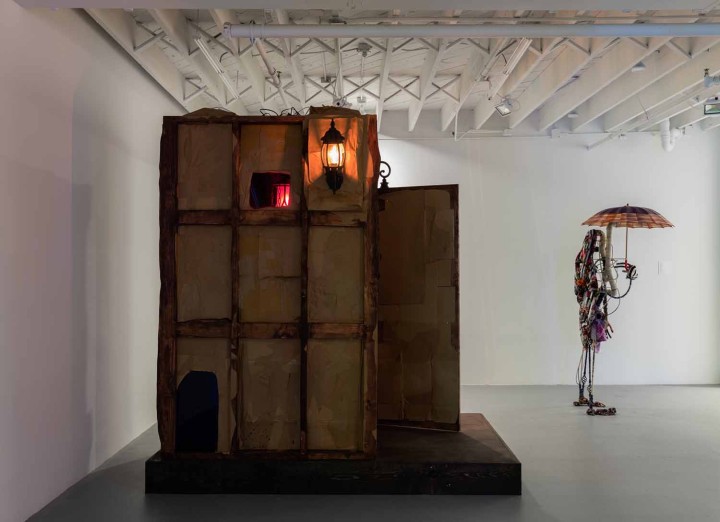 Renaud Jerez has taken his biomorphic-cyborg-skeletons to their logical conclusion: he has given them a small world of their own. His dimly lit intervention at the Institute of Contemporary Art, Miami, feels strange and timeless.

The windows are covered in red, green and blue film, creating a wash of subtle color that penetrates the room’s dark depth. Seemingly slipshod wooden structures, mounted on pedestals, have the look of dark taverns; viewers are invited to step inside these tiny houses, lit with Victorian-era street lanterns and filled to the brim with layers of fabric and the occasional recognizable symbol (a plush, goofy Grover makes an appearance). Humanoid figures made of PVC piping and swaths of textiles are suspended in animation, standing, pointing and sheltering themselves from invisible rain. One dons a glittery Uncle Sam hat atop its wiry head; another is partly a house.

We enter the room not as viewers but as visitors to a staged environment, a city street set in either the past or the future — or arguably both. Influenced heavily by cyberpunk, steampunk and a self-professed love of Japanese animation and manga, Jerez’s forms have always referenced a potential future, a singularity in which bodies have become not only connected to their technological apparatuses but also merged with them.

The breadth of their complexity is extended into an architectural environment, one that mimics the individual structures. The small buildings are stuffed with textural items — pincushions and fibers and more colored film; likewise, the figures’ cable-and-pipe skeletons are made soft and thick with gauze and cloth, with parts that suggest medical supplies, camera apertures and preternatural communicative devices in equal measure. Their elongated bodies and the eerie visual din of their homes suggest haunted, antiquated eras, but they are nothing if not cyber-futurist, too. The past and the future are, in these closed quarters, one and the same. In a world devoid of anachronism, everything requires a closer look.