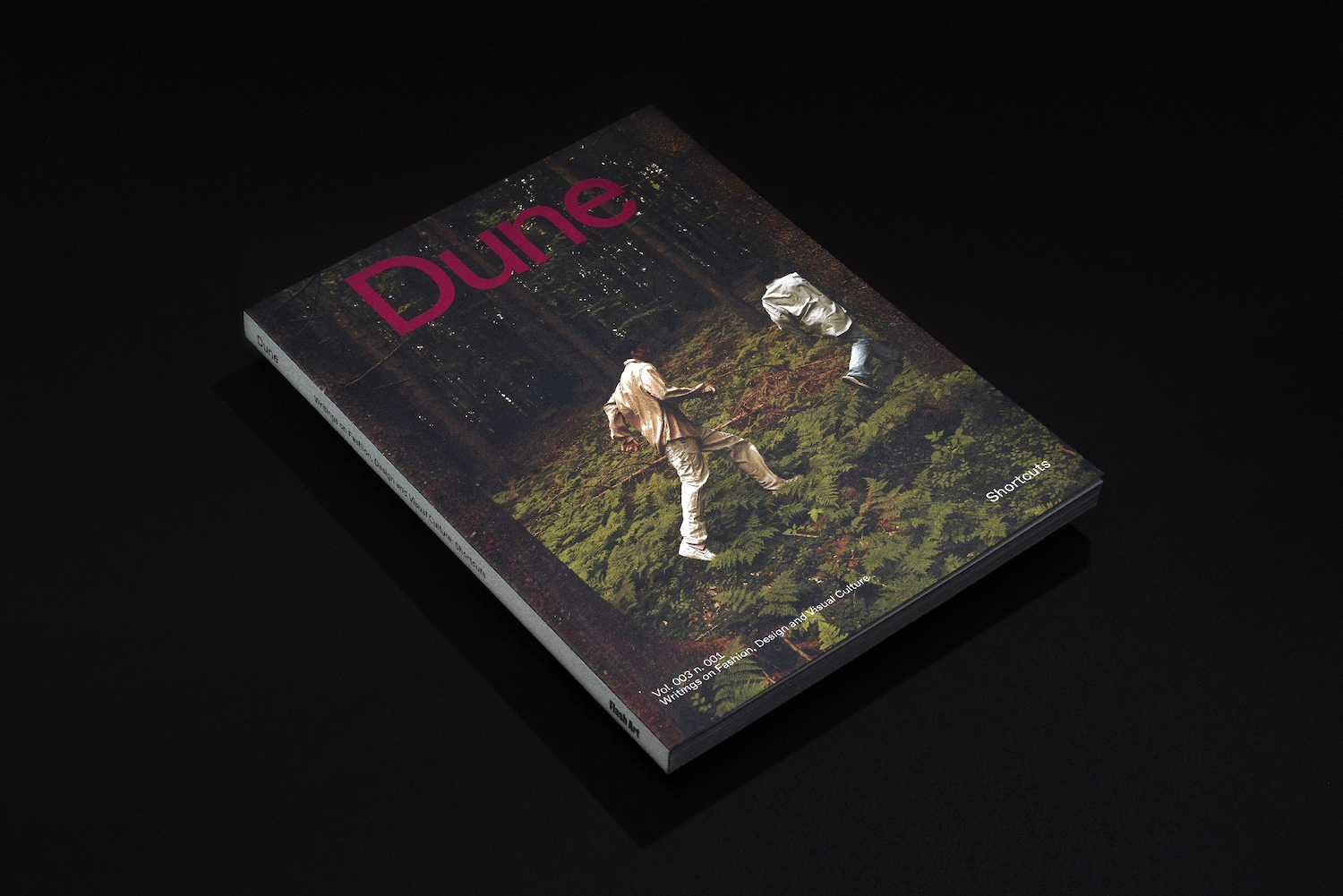 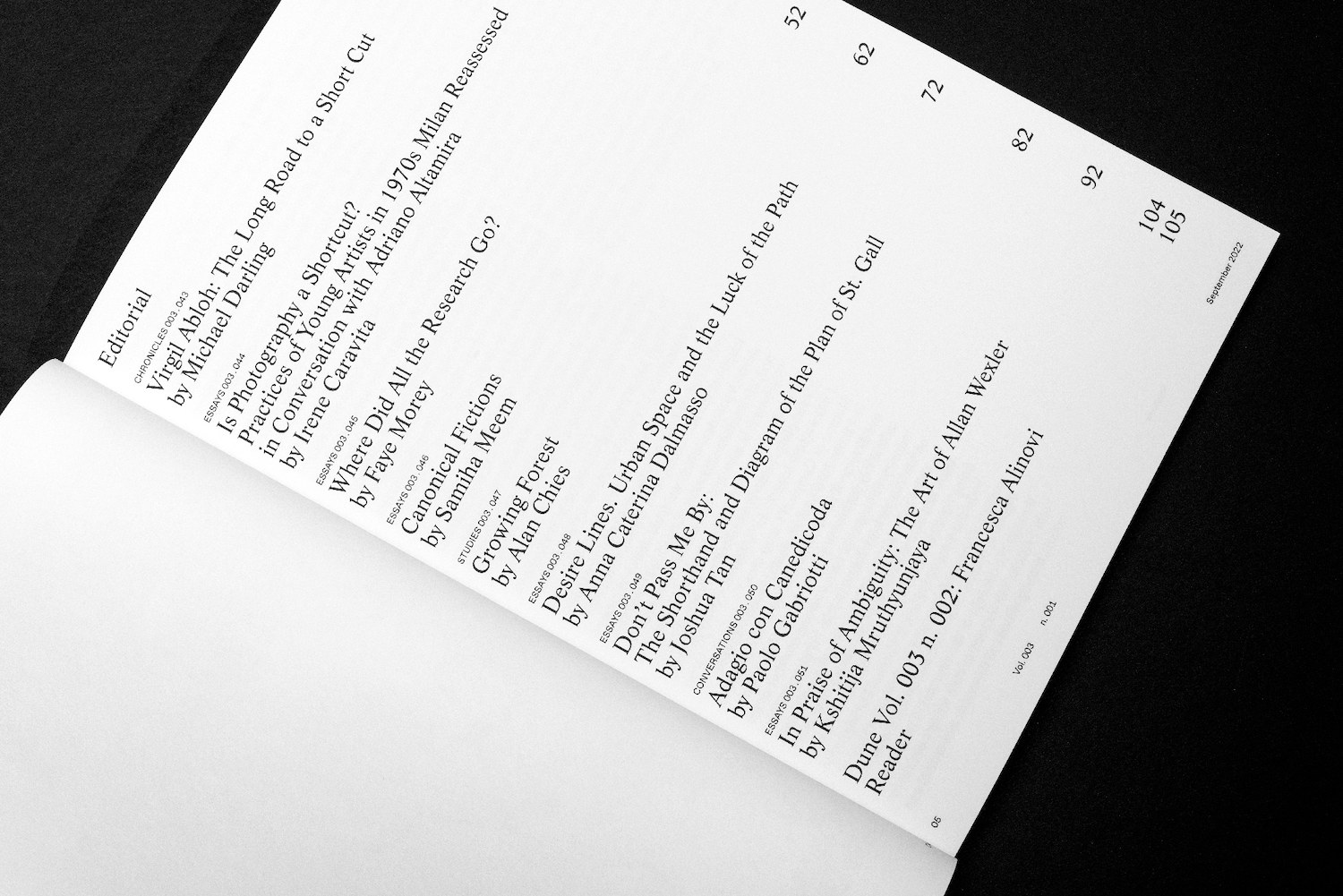 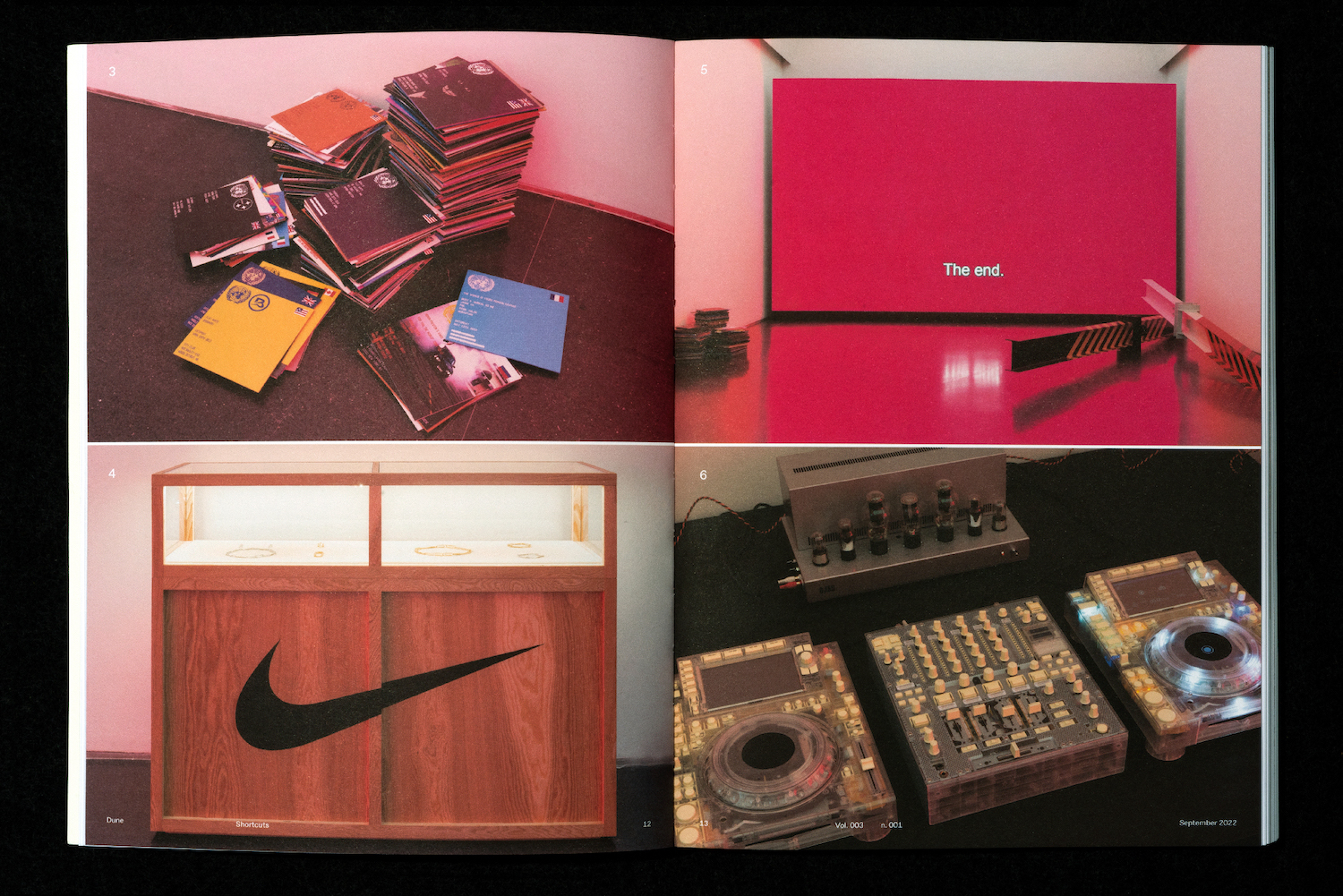 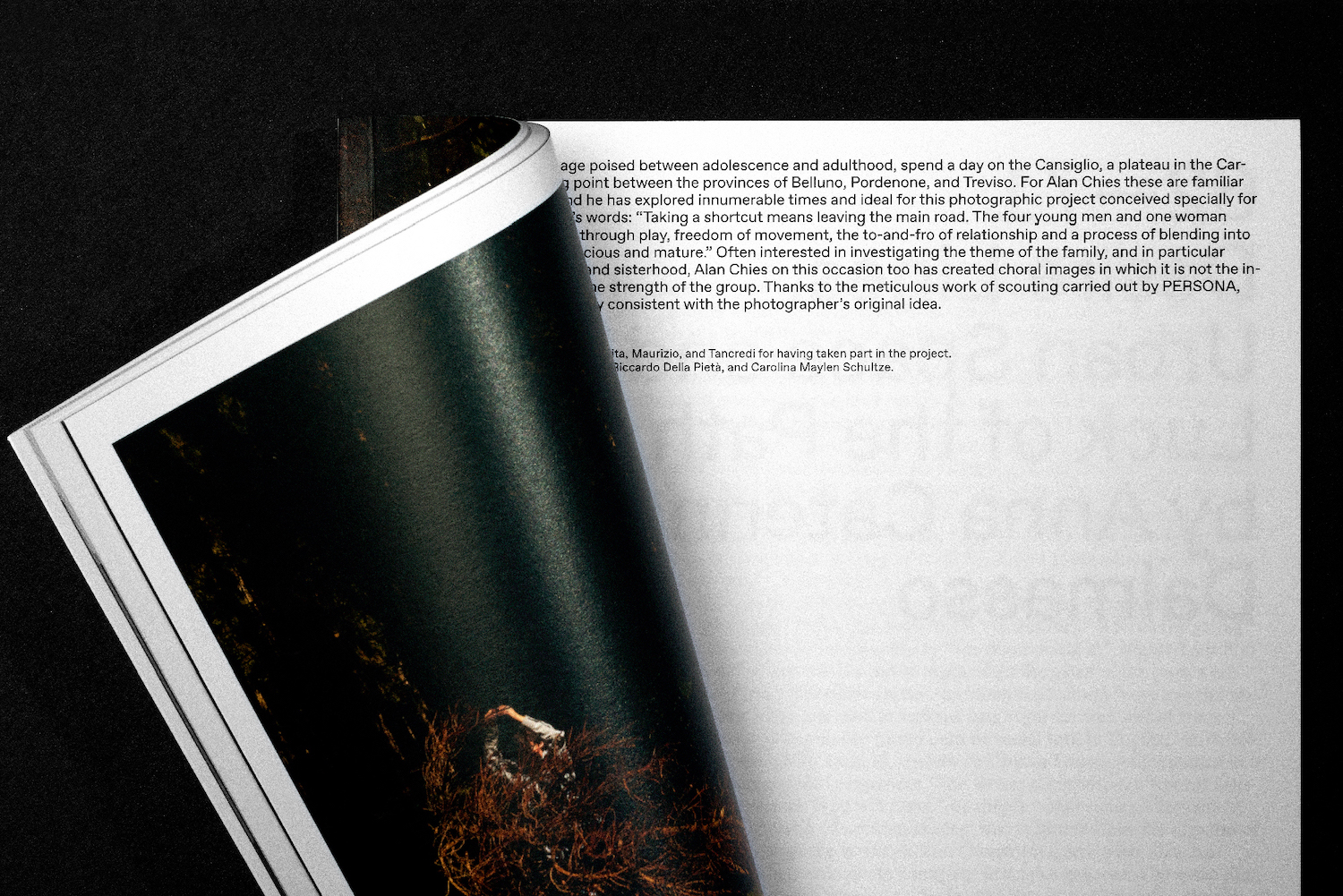 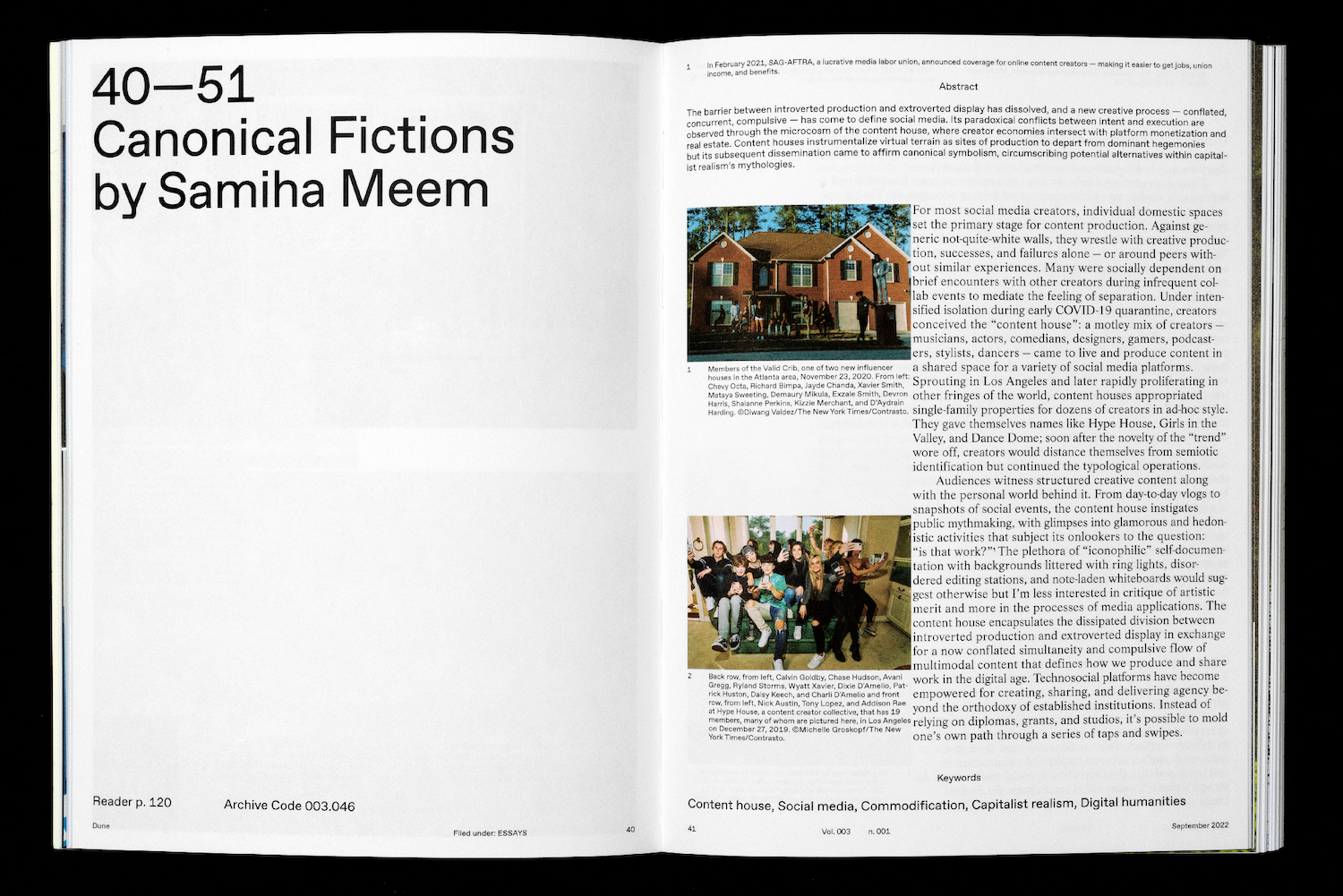 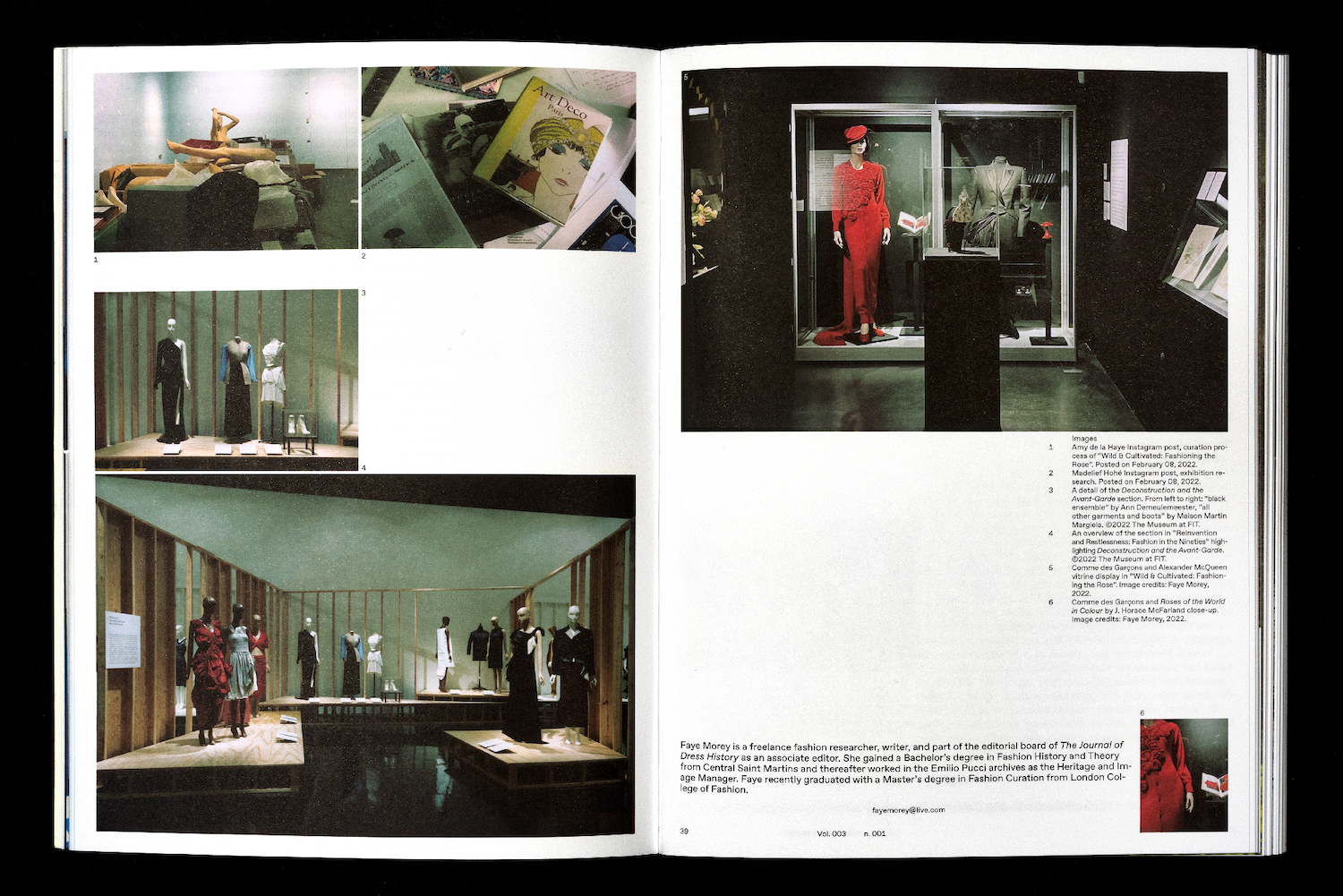 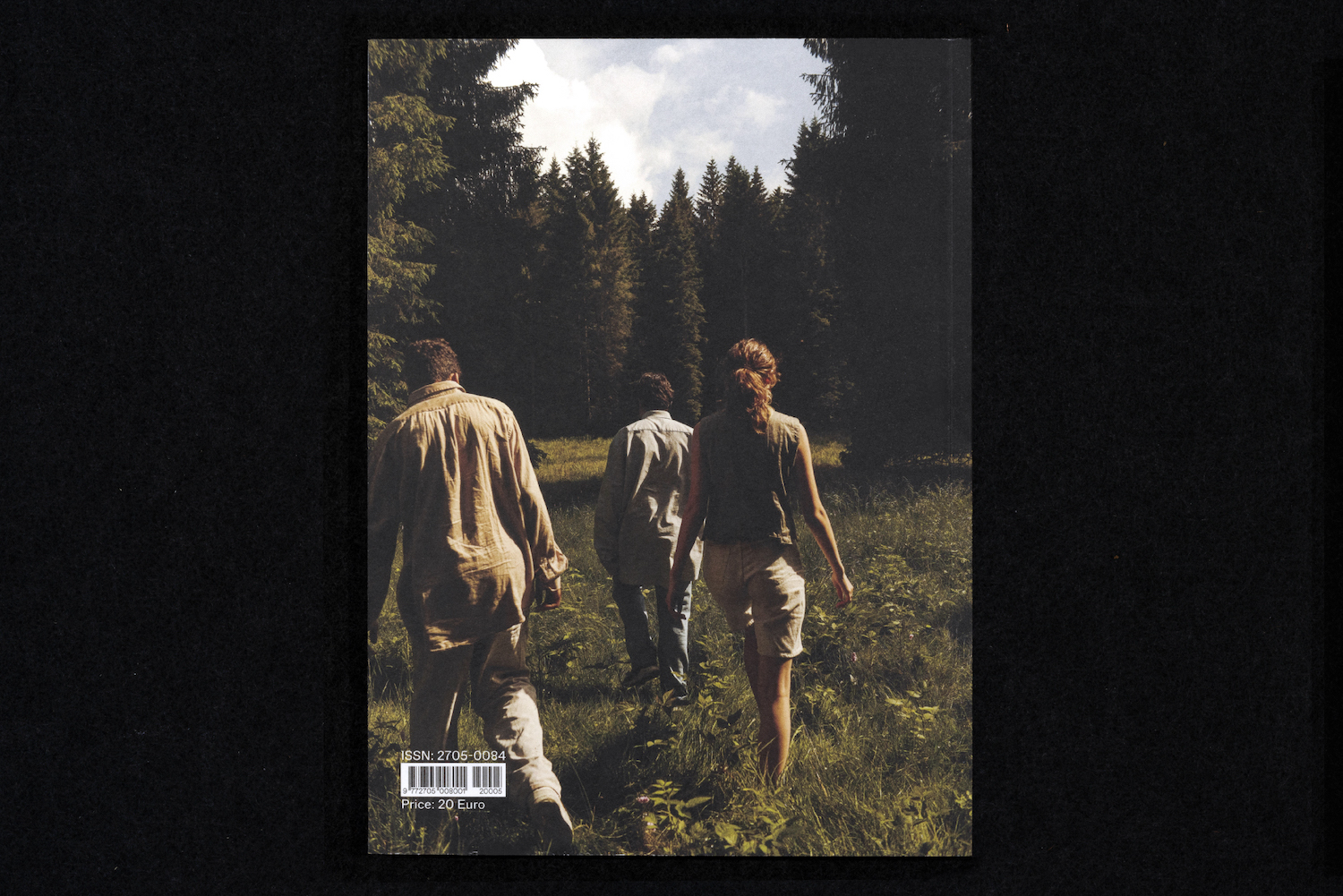 Dune is a biannual, bilingual academic journal of fashion and visual culture, with open call, welcoming scientific contributions. It is directed by Maria Luisa Frisa, founder of the bachelor course in Fashion Design and Multimedia Arts at Iuav University of Venice, is published by Flash Art, with graphic design by Think Work Observe.

The title refers to the infamous science fiction novel Frank Herbert published in 1965, and to the film directed by David Lynch in 1984. Dune is intended as a space for theoretical, critical and visual examination and presentation of new research. It reflects interests in research, writing methods and theoretical production of the team of the fashion courses at Iuav. Each issue is monothematic; the theme is defined by a word or a sentence that permeates contents, focusing on either pivotal figures and circumstances or the unveiling of stories that are not yet well known while giving space to the voice of young authors.

Dune accepts ideas and proposals from scholars and the academic papers it publishes are subject to Double-blind Peer Review. The scientific committee is characterized by the presence of academics, creatives and professionals active in the realms of criticism, fashion studies, contemporary art, architecture, the running of museums, curating, publishing, art direction and photography.

Dune is a part of the research cluster FLAIR and it is supported by donors that trusted the editorial project. The journal, devoid of traditional advertising pages, is an expression of a work group interested to new forms of dialogue with companies, institutions and collectors.

The fifth issue of Dune sets out to celebrate the visionary talent of Virgil Abloh, founder of the Off-White brand and creative director of Louis Vuitton, who died last year at the age of forty-one. His name does not appear on the cover of Dune: it has been chosen instead to use one of the words that serves to identify his work, Shortcuts, taken from his legendary lecture at the Harvard Graduate School of Design in 2017.

The lecture, later published in the Sternberg Press’s series “The Incidents,” is a powerful statement, the manifesto of a man who with his mode of design transformed the role of the creative director and contributed to the definition of a contemporary aesthetic that is porous to its surroundings: from music to exhibition-making, from fashion to the forms of its consumption. The lecture and the publication, entitled Insert Complicated Title Here, describe shortcuts — or “cheat codes”— as components of a design methodology that makes flexibility, versatility and astuteness means of experiencing the world, of exploring and, if possible, changing it — or at least pushing its bounds.

In this issue of Dune it is Michael Darling, curator of the exhibition and book Virgil Abloh: “Figures of Speech,” who describes Abloh’s work through the concept of the shortcut. The issue’s other articles can be seen as case studies of this notion, bearing witness to its wealth and critical and interpretative productivity: an undervalued, clearly interdisciplinary potentiality and one that the various contributions to the magazine show to be worthy of further exploration, from an even broader and more diverse perspective.

In an article of a hybrid nature — in which the essay unfolds around extracts from a conversation with Adriano Altamira — Irene Caravita opens up to the possibility that the idea of shortcut can be applied to at least some aspects of the recourse to photography by artists in the 20th century. In the case of this article, the embryonic character of the critical use of the concept of shortcut is evident in its author’s own words, when she says that she has moved from a statement to a question.

In any case, the shortcut of which Irene Caravita speaks is a fertile one (in its artistic results), as is, at least potentially, the one discussed in Joshua Tan’s essay, implicit in the digital practices of architectural design. In this field there is a limit all too easy to exceed: the one beyond which the utilization of defaults — shortcuts, in other words, which in themselves are aids to the designer — results in creative impoverishment. Tan offers as a counter-point, and an example for contemporary practice, the use of graphic simplifications in the celebrated medieval Plan of Saint Gall, seen on the contrary as generative kernels of design choices and creativity.

Faye Morey also speaks of a sort of reduction, and transformation along the shortcut, in her text, investigating the form that the research carried out for the staging of a fashion exhibition assumes, or does not assume, in its eventual presentation. This essay also incorporates extracts from conversations, the ones its author had with Colleen Hill and Amy de la Haye, curators of the two recent exhibitions that are specifically analyzed, and it too, above all, holds back from giving a definitive answer.

It seems that the productivity of the concept of shortcut, of which the texts referred to up to now are examples, has to coincide with that of the figurative sense of the term. This apparently inevitable perspective is overturned by Anna Caterina Dalmasso, who in her essay presents an interpretation of literal shortcuts created on unpaved areas of urban land by the simple passage of people when they cease to rely on the routes established by the institutional planning of the city. Another concrete and clearly individualized reality is the one subjected to critique in Samiha Meem’s article, which, among the shortcuts produced or induced by social media, concentrates on the phenomenon of the content house, the communities — which first appeared in California but have now spread around the world — that united creators of content in a shared living space.

Finally, this issue of Dune contradicts another automatic assumption, the one by which the idea of shortcut is associated with characteristics of simplification and brevity. This is not true of the shortcut in the work of the two artists to whom monographic articles are devoted in these pages, very different from one another. Paolo Gabriotti introduces us to Canedicoda through a sort of autobiographical fragment at whose center lie two days he spent with the artist. In the form of a more traditional essay, Kshitija Mruthyunjaya presents in-stead an interpretation of the work of Allan Wexler in which he attributes to his process of research into and materialization of ambiguity the non-paradoxical value of a shortcut. A value that is not all paradoxical because, as Alan Chies declares with regard to the visual story he has created for Dune, “taking a shortcut means leaving the main road.”