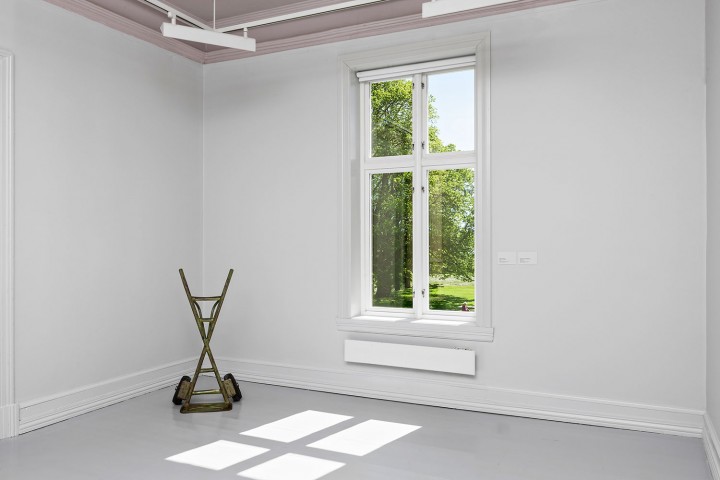 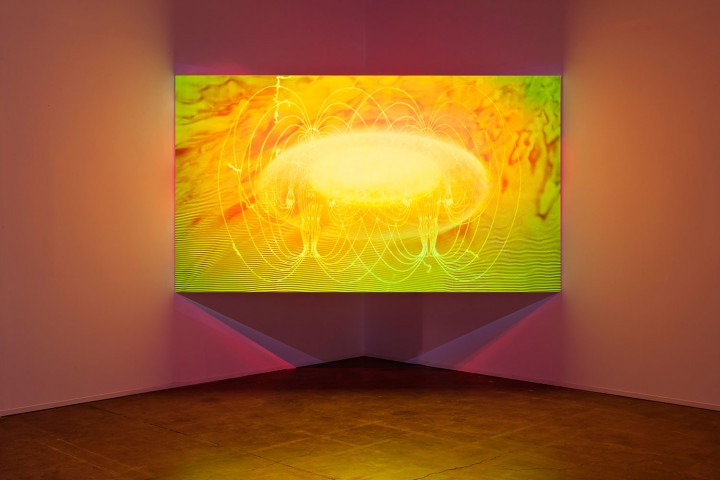 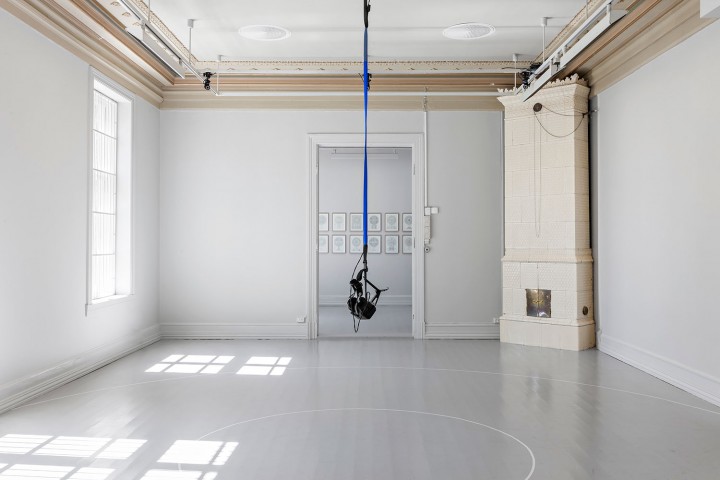 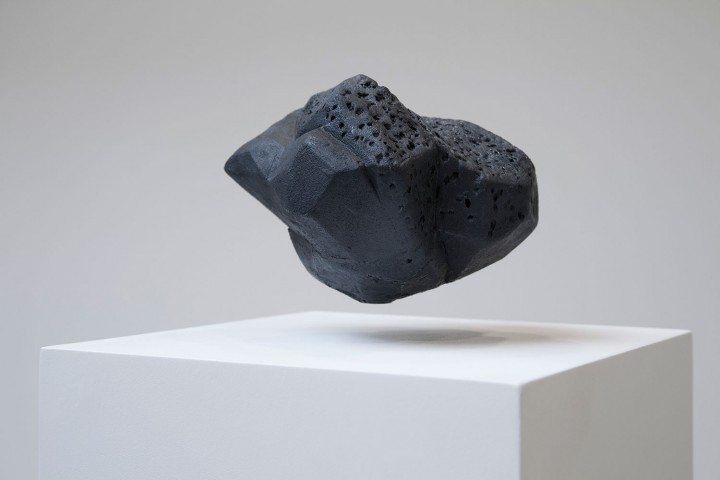 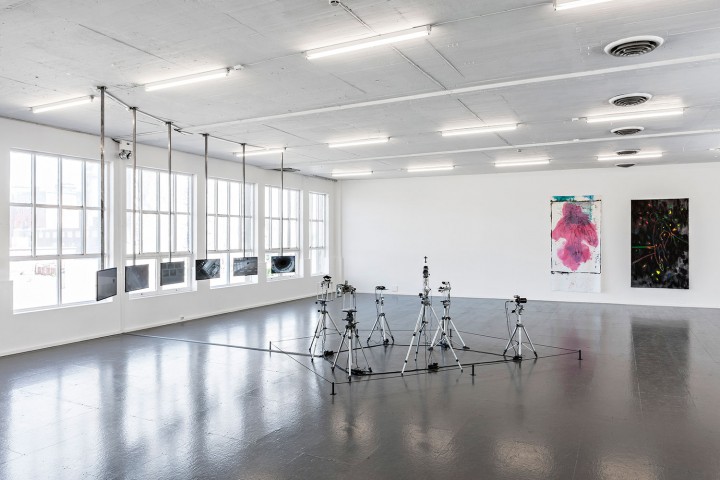 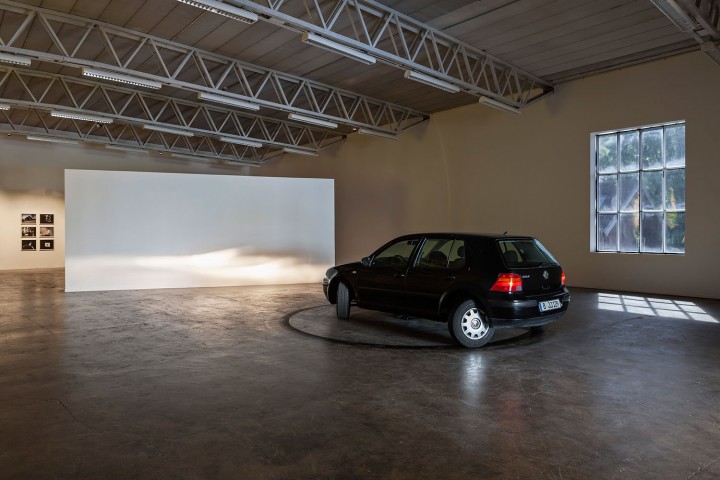 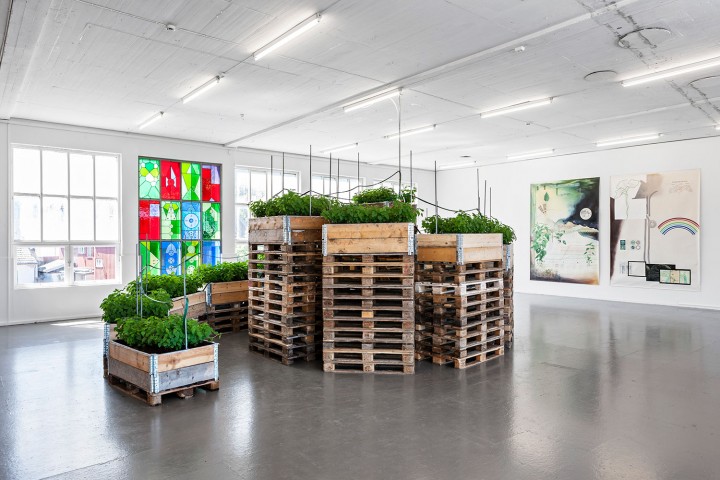 It may sound like a rather quirky idea to begin the latest edition of the Momentum Nordic Biennial of Contemporary Art, the largest of its kind in Norway, and maybe the most important biennial of contemporary art in Scandinavia, within an obscure museum in Oslo and not in the small town of Moss where the show’s main venues are located.

It makes perfect sense, however, in terms of the concept of “Tunnel Vision,” the title of this edition. The Emanuel Vigeland Museum is located a few subway stops outside of the city center, and only open on Sunday. Its red brick hull hides a dark, cavernous interior that requires the eyes to adapt for a few minutes, until finally the eccentric wealth of frescoes covering the entire space unfolds. The artist, brother of highly prolific sculptor Gustav Vigeland, had it built originally as a museum, but then made it his mausoleum. Still today it houses his ashes in an urn over the low entrance, forcing entering visitors to bow their heads, an idiosyncratic and self-centered construction that serves as a primer for the rest of the Biennial, and demonstrates that the idea of a loss of peripheral vision is more of a metaphor than a motif — and obviously does not apply to the curators themselves.

Since its first edition in 1998, Momentum has consistently aimed at defining what it means to be an artist from the Nordic countries. Varying constellations of young curators have since defined ever new strategies for introducing Nordic talent against a backdrop of relevant international contemporaries. The latest edition, already the eighth, is no exception, and it is certainly one of the most international efforts, arranged by four globally active curators: Birta Gudjonsdottir, Stefanie Hessler, Jonatan Habib Engqvist and Toke Lykkeberg. One could be excused for expecting an overload, but the short train trip from Oslo to Moss is rewarded by a surprisingly spare exhibition — perhaps partly in response to the schizophrenic seventh edition, curated by Erlend Hammer and Power Eckroth, who produced two parallel but entirely separate exhibitions.

This year the four curators decided to speak with one voice, starting in the collaborative catalogue essay: “This biennial does not deal with the world we might all be said to share, but rather the one each and every one inhabits on our own, or a world that exists in the margins.”

Does this contradict the original “tunnel vision” idea? To find out one needs to explore the two Moss venues. Punkt Ø Kunsthall features a series of spectacular presentations, starting with a fog installation in the first room, with the full title Glacial Fog Falls. Fog Installation #01494, Momentum Biennial 2015, Moss (2015). The title already reflects the site specificity of the piece, created by octogenarian Japanese pioneer of ephemeral art forms Fujiko Nakaya. Fragrance-experimentalist Sissel Tolaas created a Momentum perfume, a small bottle of which is an integral part of the catalogue, which is also present in dedicated rooms, while an eclectic soundtrack fusing electronic with Asian music by the Swedish musician Zhala sets the scene (like a moment ago, when we just stood here, 2015), probably best experienced in a psychedelic room filled with garishly colored wigs, called Nervescape IV (2015), courtesy of Hrafnhildur Arnardottir, a.k.a Shoplifter. Next door things get more serious. Russian artist trio Valia Fetisov, Dzina Zhuk and Nicolay Spesivtsev present their own mobile app, Paranoiapp (2015), which allows anonymous reciprocal surveillance among visitors, while Edward Shenk’s irritatingly rambling, entertaining and alarming video Part III – Battlefield Wikipedia (2015) unfolds a psychotic narrative on a range of subjects from conspiracy theories to body modifications. As if to address these problems, Brody Condon’s Gestalt-Therapy session as video performance fills a screen on a custom-built room upstairs, reflecting the intimacy of the original session that took place elsewhere, but was streamed live during the opening.

Daniel Steegmann Mangrané’s Occulus Rift installation Phantom (kingdom of all the animals and all the beasts is my name) (2013–2015) is one of the centerpieces of Galleri F15, the second location, with a fabulous view on the Oslofjord. Joanna Lombard leaves the villa for her speaker installation Exclusion (2015) in the nearby forest, which engulfs the viewer in an aural landscape of laughter that sounds increasingly mocking the longer you listen to it. Based on a therapeutic strategy to help patients deal with alienation, it also connects back to Brody Condon’s therapy. Entering the stylized imagery of Mangranè’s virtual reality installation is a strangely disembodied experience, in contrast with the idyllic setting of the gallery. An installation by Icelandic artist Steingrimur Eyfjörd occupies much of the first floor. A humorous laboratory of sense and the senses, its text paintings, collages and simplistic interactive arrangements encourage viewer participation. Two holes in black cardboard are mounted on a table, accompanied by a text asking the viewer to focus on something and, keeping that focus, to turn one’s attention to the space out of focus. It is a perfect example of the overriding concept, and a surprisingly simple example of the digital dilemma of eternally present information and the individual: “After a while you will see a white cloud form. While it is forming you can make it grow and cover your body, so that you become invisible.”

It may be an overly simplistic tunnel vision experiment, but it makes a striking point: even if the fantasy of making yourself disappear in the cloud — something increasingly desirable if impossible in this age of continuous digital tracking and surveillance — was possible, we’d probably lose ourselves. There is no light at the end of the tunnel here.

32 international artists will take part in MOMENTUM 7, the Nordic Biennial for Contemporary Art.