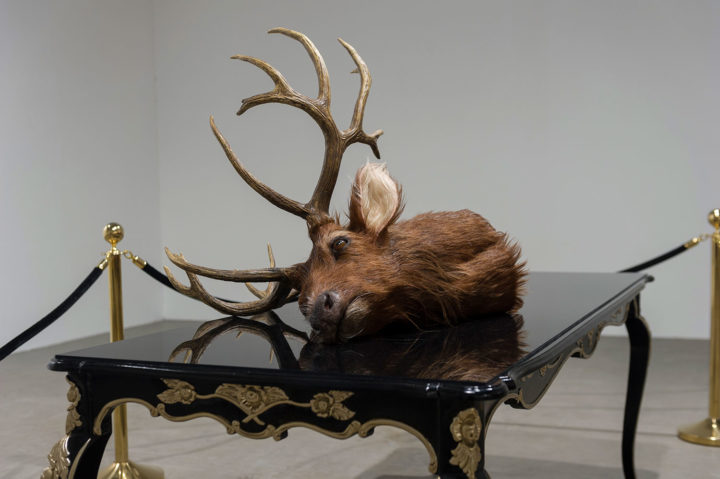 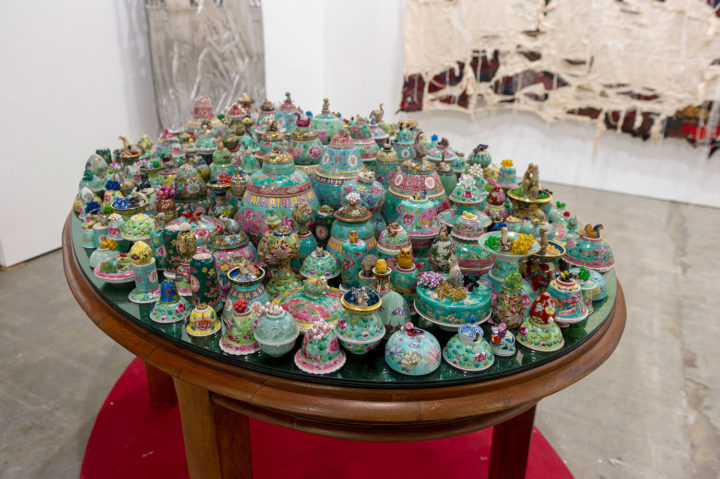 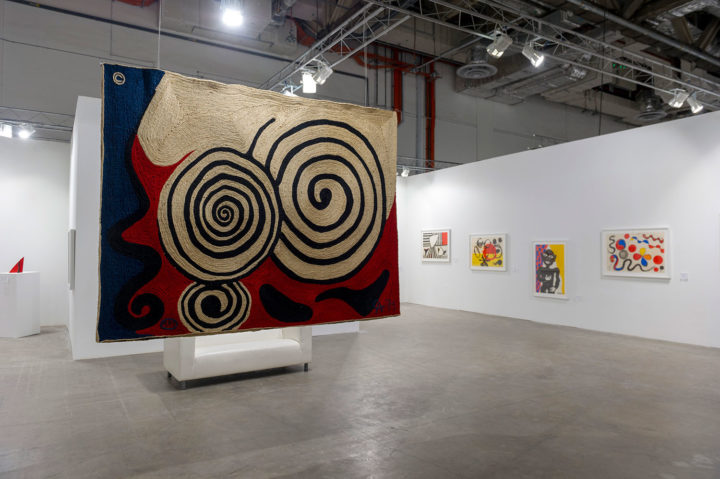 Art Stage Singapore, which espoused the lofty goal of representing a regional identity with its 2017 slogan “We are Asia,” returned this year with a more consolidated fair: a foray into luxury consumerism vis-à-vis an art-design showcase titled “Art Meets Design: Cultural Trend or Fashionable Lifestyle?” and a special feature on the Thai art scene.

With the latter, Art Stage 2018 served up some challenging works by established Thai artists. Sakarin Krue-On’s Tale Bearer’s Tale: The Last Deer was particularly noteworthy. The work uses the now-extinct Schomburgk’s deer, a species once unique to Thailand, as a foil for considering the socio-historical landscape of Thai society. The work’s video element, presented alongside a beautiful but jarring severed head of a supposed Schomburgk’s deer on a desk, features local cultural workers and members of the Thai working class discussing the mythical deer, occasionally interjecting commentary on economic and social developments in Thailand. Another significant offering was Nova Contemporary’s installation of Tada Hengsapkul’s The Shards Would Shatter at Touch (2017), a piece that was to be presented at Cartel Artspace in Bangkok in 2017 before being censored by Thai military personnel. The Shards Would Shatter at Touch is a performative work in that the set of forty-nine thermochromic printed cloths are meant to be pressed against the viewer’s body to reveal an image and number. The number corresponds to a story within a set of documents attached to the wall, each dedicated to a human rights activist or political exile persecuted by the Thai military. Such presentations confirm the continued relevance of regional platforms as well as the fair’s agency and value in promoting challenging political work.

This year’s Art Stage Singapore 2018 was perhaps more transparent in its value-creation mechanisms. For example, the fair presented an exhibition from the Tiroche DeLeon Collection, based on works acquired between 2011 to 2016 at previous editions of Art Stage Singapore. The art fund invests in artworks from developing markets through acquisitions, but also lends its works to prominent museums, exhibitions, biennales, art fairs, etc. — presumably an intelligent strategy for developing cultural capital and, by extension, the monetary value of its holdings. The exhibition exemplifies the role of the fair in creating value and enabling exchange for its customers.

Similarly, the notion of the collector as a key figure and benefactor of the art fair was on display in “Calder on Paper,” which presented a number of mobiles and works on paper from the private collection of Micky Tiroche. Another highlight of the fair was organized by the Southeast Asia Art Forum, who exhibited a design collection by The Artling, an art advisory and online gallery run by a prominent collector in Singapore, whose collection was featured at the fair in previous editions.

With Art Stage’s expansion to other cities such as Jakarta, the fair’s consolidated focus on its existing network could be limiting in terms of understanding the Southeast Asian art market as a cohesive whole. This is especially the case for a regional market diffused across multiple centers, which inherently forces a commercial enterprise to chase capital, moving from one center to another. Coupled with comparatively higher costs for manpower and space in Singapore relative to other countries in the region, it is no surprise that Art Stage is venturing forth to other national markets. Thus, instead of a regional market being defined by the brick and mortar of a singular marketplace, we may come to define the “regional” through the structured flows of capital and art. At least one thing is clear: Art Stage 2018 encourages us to reconsider how we think about a “regional market.”