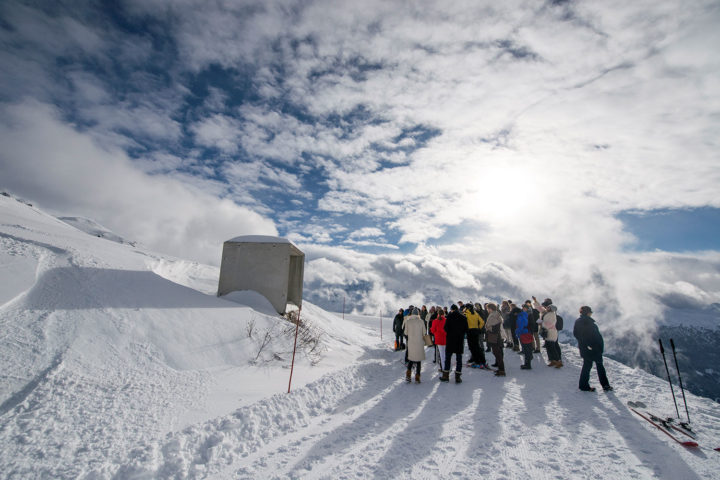 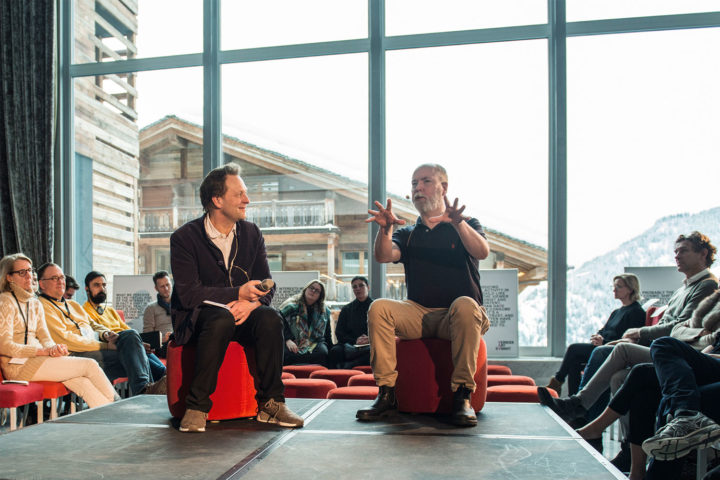 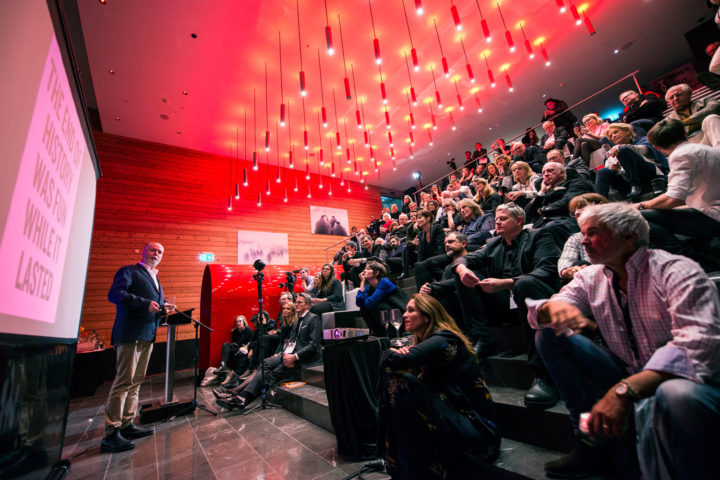 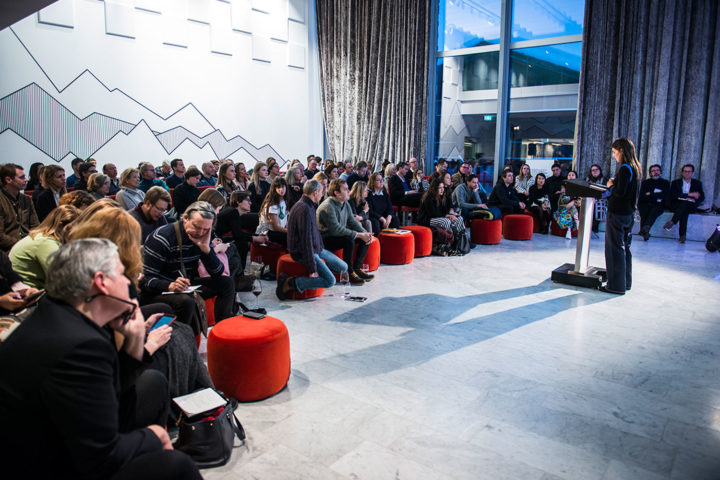 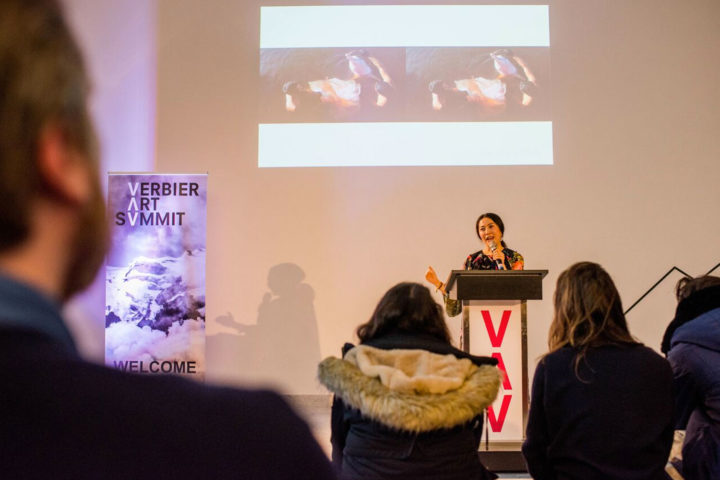 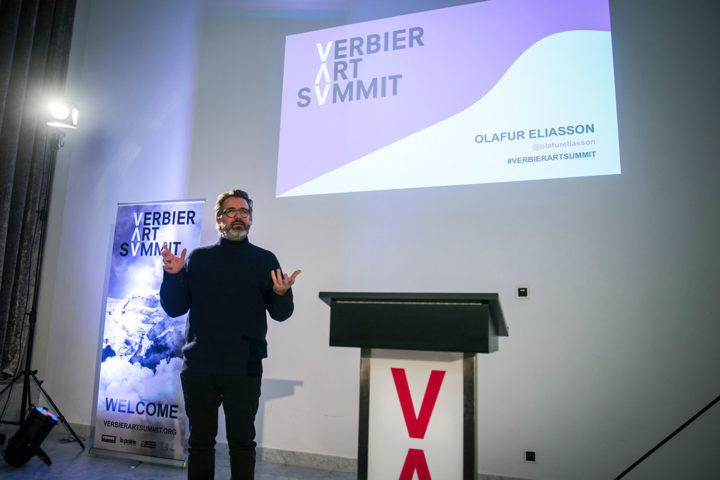 Just as Las Vegas seeks to rebrand itself by investing in gourmet dining and smart clubbing instead of musty gambling halls, so apparently do premier Swiss alpine regions (old-world charm Engadine, exclusive Gstaad, and, since 2017, the Valais skiing resort of Verbier) seek new audiences by identifying as the latest temporary Shangri-Las of contemporary art and edutainment.

In textbook Marxist fashion, capital proper got there first and continues to call the shots. The Jackson Hole Economic Symposium in distant Wyoming first took place in 1981, while closer to home, literally, the inaugural edition of what has since become known as the World Economic Forum was already held a decade earlier in the winter sport hub of Davos. In fact, this second edition of the Verbier Art Summit, themed “More than Real: Art in the Digital Age,” took a key chapter from its underwriters’ playbook with its concept of trickle-down discourse, as closed sessions produced sound bites for the subsequent public program. (For example, novelist, artist, and designer Douglas Coupland’s ruminations on a “pre-internet brain.”) There’s nothing surprising or particularly “wrong” about holding these casual yet nonetheless tiered networking mixers in the kinds of destinations already frequented by energized patrons, both actual and potential, and their managerial-cognitarian entourages. Granted, the prospect of debating transformational shifts in VR and algorithmic technology as it affects the conception, production, and experience of art within neoliberal consumer societies in some drab suburban venture-capital non-place seems pretty uninviting; but considering the summit’s fuzzy if occasionally amusing contemplations and hypotheses, any engagement with this vast topic may benefit from cultivating more proximity and exchange with the concrete sites and people that develop and market virtuality, for the sake of whatever reciprocative insights and projects that may whence ensue. Put differently, and to recap Olafur Eliasson’s keynote talk concluding the summit, there seems to be some ambiguity over the intent and reach of such post-institutional endeavors beyond presenting an arguably stimulating company outing.

That ambiguity colored some of the more defined presentations by mostly art-world regulars, ranging from Anicka Yi to Ed Atkins and Michelle Kuo. While the latter introduced her art-historical research into the pioneering yet eventually faltering 1960s group E.A.T. (Experiments in Art and Technology) by revisiting the collective’s exuberant techno-architecture pavilion funded by Pepsi-Cola, Ed Atkins performed a dense text on the current image industry’s edict of “losslessness” and its subversion at the hands of art, proposing a Freudian scenario of melancholic perversion updated for the age of 3ds Max period dramas. His was more riveting, in my view, than the likewise dense and heavily detailed presentation by the neuro- and bioengineering researcher Paul Verschure, who in the past has realized multimedia environments, including audio-visually experimental imagings of a concentration camp. In direct opposition to Atkins’s recursion to a vector-based Freudian yet noninterpretative phantasmagoria of mourning, Verschure’s artistic projects aspire toward previously unrealized, educative sensorial experiences, overwhelmed by charts, graphs, and newfangledness. The Stedelijk’s new media curator Karen Archey’s brief art-historical primer on the dichotomy of 1990s net art and its disappearance vis-à-vis marketable and alluring post-internet art cropping up in the mid-aughts seemed applicable to the notable difference in style and intent of these two respective positions deploying the digitally produced virtual. But furthermore, the presentations also exemplified the often uneasy dialogue — or lack thereof — between the worlds of “rationally” guided scientistic projects and protocols seeking “creative” cross-pollination and the chatty and entitled while equally dismissed and ridiculed rhetoric favored by the art sphere. As to the humanist crisis stemming from art’s impotence in the face of the fast-developing expanded cinema of VR and its spectacularly violent or erotic or otherwise engrossing dreamworlds that summit curator Daniel Birnbaum halfheartedly voiced, Coupland merely retorted that the “real” world was a “dump” to begin with. True that — if easily forgotten in a winter wonderland.

Daniel Horn is an art historian based in Zurich and Berlin.