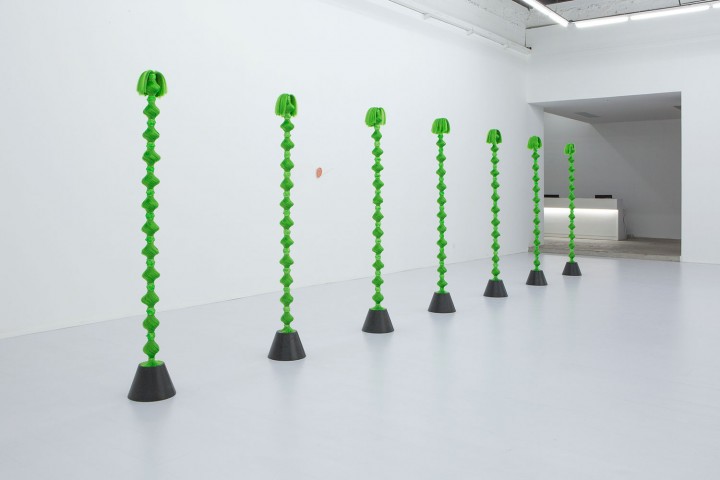 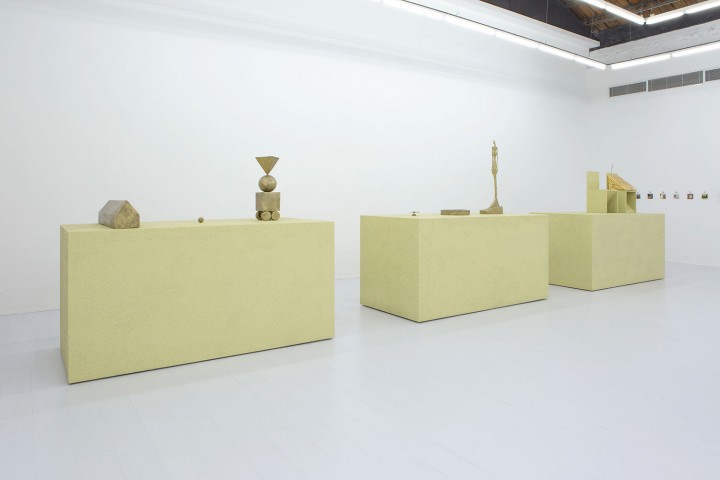 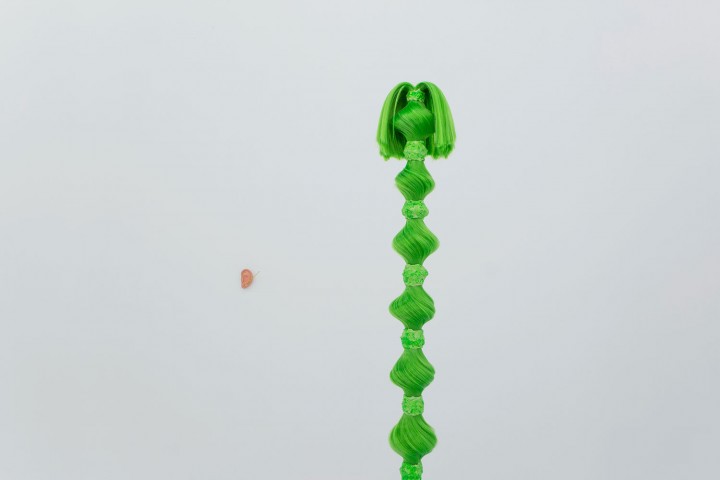 Yu Honglei’s “Fat Mouse” looks like a primitive land infected by space-age aesthetics.Three spheres on tripods, each 1.5 meters in diameter (Mud Ball 1, Mud Ball 2, Mud Ball 3, 2014) recall Eero Aarnio’s famous “Ball Chair,” yet possesses the texture of crude pottery. There is also a line of totem poles made of bright green wigs (A Week of Hers, 2014) that formally suggest Constantin Brancusi’s Endless Column. In a work inspired by Wolfgang Laib’s piece of the same title (Rice House, 2014), three metal objects sit on a light olive-yellow block: a long house, an eight ball and an architectural structure formed by a sphere, a cube, a pyramid and disks. Like Rice House, Woman in Venice and Fat Chair adopt the same (non-linear) logic and methodology; they start with reproductions of works of the same name by Alberto Giacometti and Joseph Beuys.

Yu’s animation Take a Walk (2014) is shown; is built upon an audio collage of music by Michael Jackson — whose images haunt the video — it is also an art history test: images of  contemporary artworks, pop up along with the music. Summoning the “king of pop” does not merely celebrate the long affinity between art and pop culture, but also acknowledges how the production of contemporary art is often similar. Institutionalization, mass production and over-interpretation of images and discourses in art  lay the ground for predigested prescriptions and aesthetic standardizations. The mechanism  is demonstrated by Yu’s Untitled (2014) — thirty-eight A5 images resembling children’s flash cards, with names and images of banal objects on them. With such objects, we seldom question the seamless matching of the signifier and the signified. Their qualities and contexts are exhausted once they appear and disappear in banality and functionality. The overexposed images of artworks are is the same : the art vanishes behind its  own images. Yu’s appropriation of existing works accelerates this exposure and gives it a Lefebvre-ish rhythm — a repetition and difference.