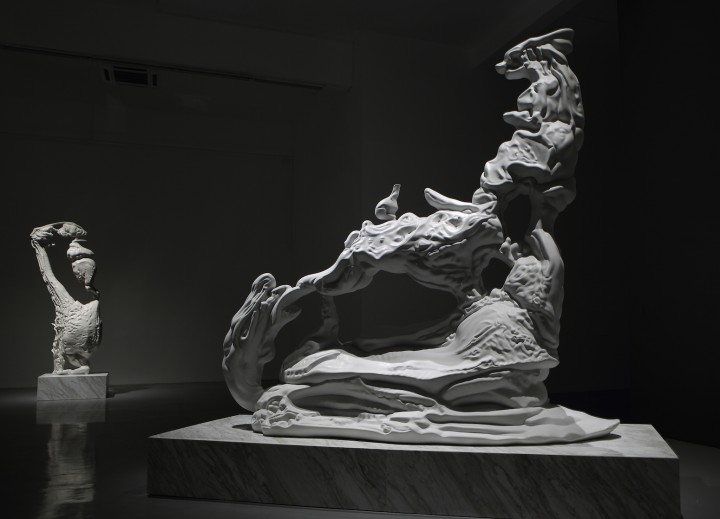 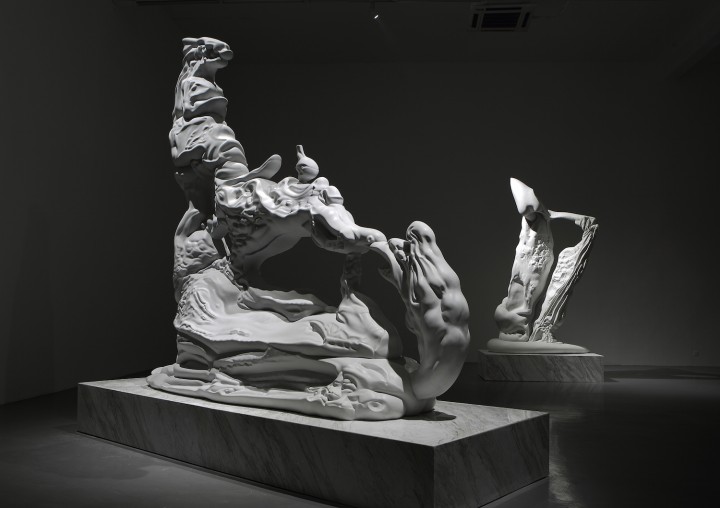 Chinese artist Zhan Wang is famous for his ongoing project of stainless-steel taihu rocks, which imitate the temporal traces of weathering on the porous stones — a protagonist in ancient Chinese gardening culture — with an artificial metal produced for perpetuity. Therefore, on my way to his exhibition “Morph” at Long March Gallery, everything in my imagination was colored silver.

I was wrong. Apart from one metal rock, all the works in the show are a non-reflective, milky white. This is Zhan’s new sculptural series “Silhouette” (2014). The five gigantic objects — with heights between three to four meters — look like splashes of thick white paint that has frozen in the air before reaching the ground. On closer examination, there are uncanny, fleshy textures in the folds, accentuated by spotlight-generated shadows. I even recognized the shapes of human parts in them.

The exhibition opened at a time when a couple of sci-fi movies were topics around every dinner table in the Chinese art world. The formal fluidity of Zhan’s “Silhouette” evokes the post-human bodies of our dystopian technological fantasies, in which transcendent mental and physical infinitude changes everything — for better or worse. It turns out that Zhan’s series is not about the human of the future, but of the present. The works are self-portraits; the artist stood in front of his stainless-steel rocks and captured his twisted reflection with a camera. Then, with the help of computer processing, he turned them into sculptures with resin and marble. Reflection is still present, but it is veiled by the matte white surface of the sculptures. The artist holds up the mirror to himself and to the country’s capitalist-industrial production, while at the same time exploring the materiality of his sculptural medium by forcing the concept of reflection on it.