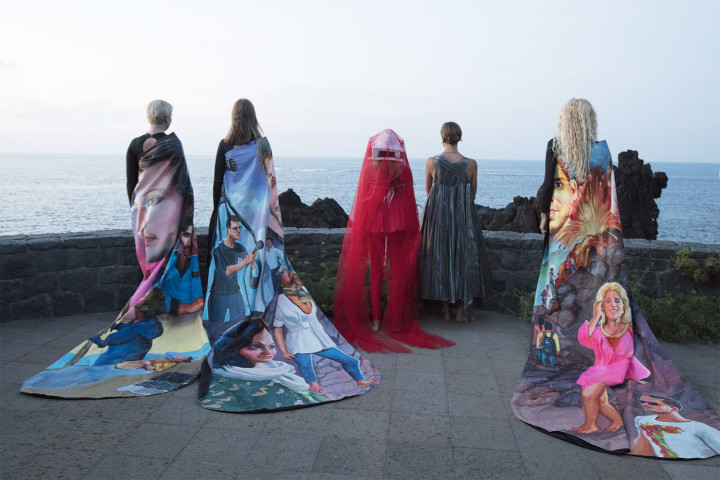 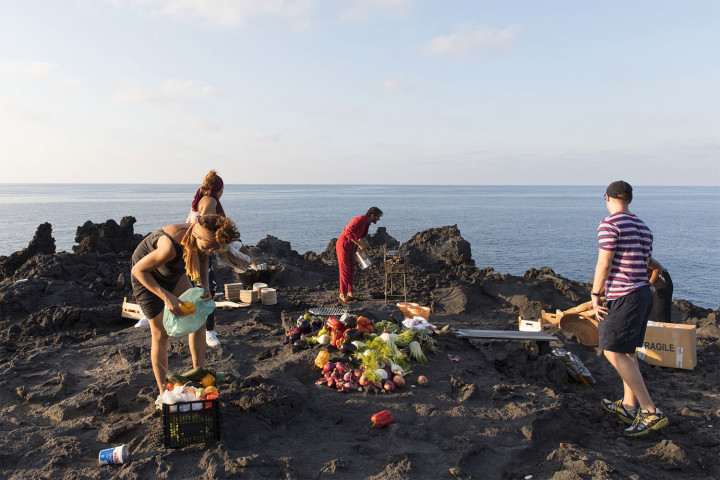 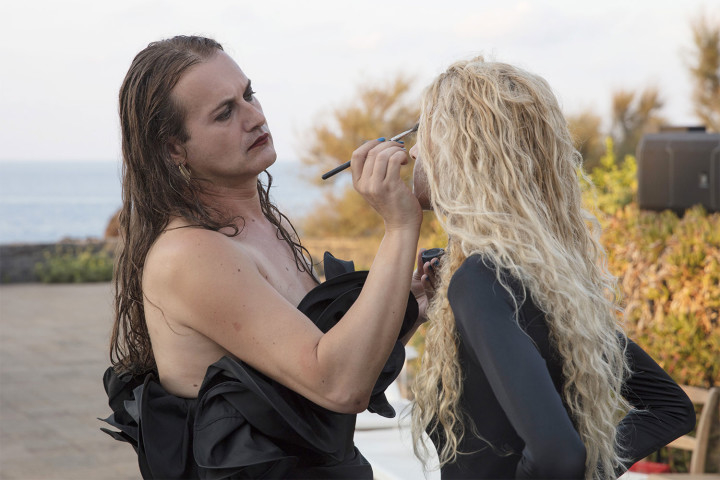 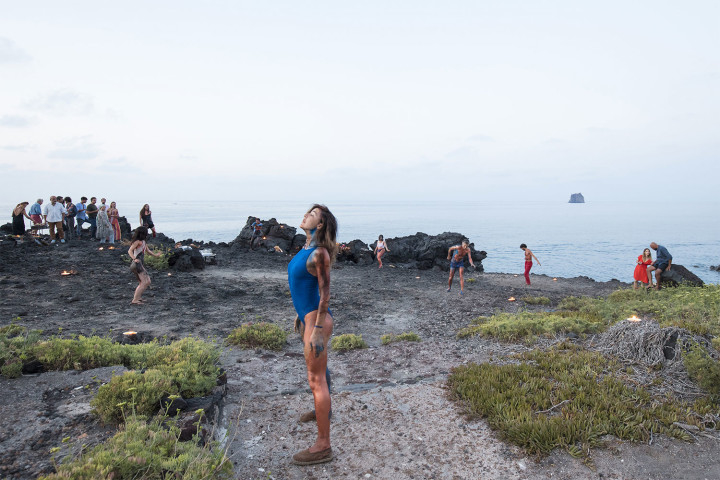 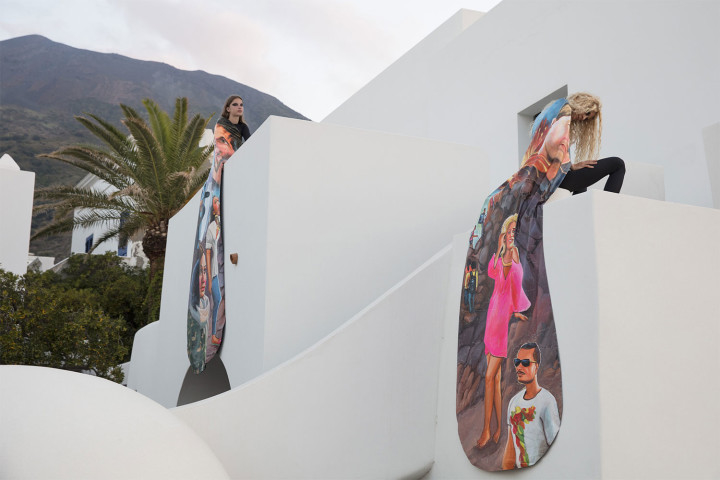 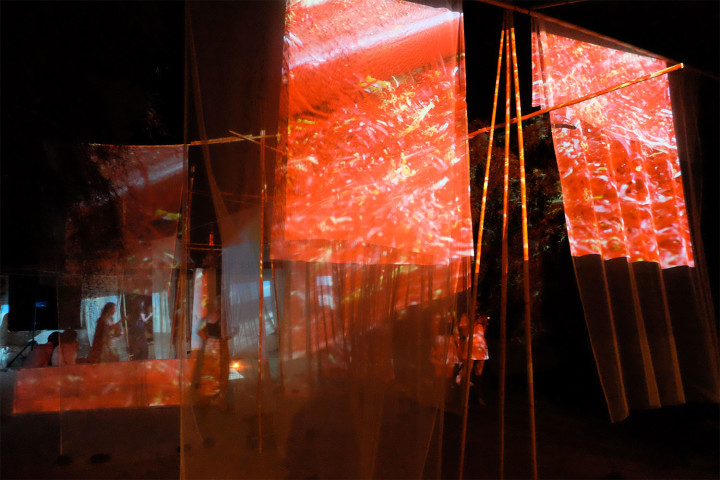 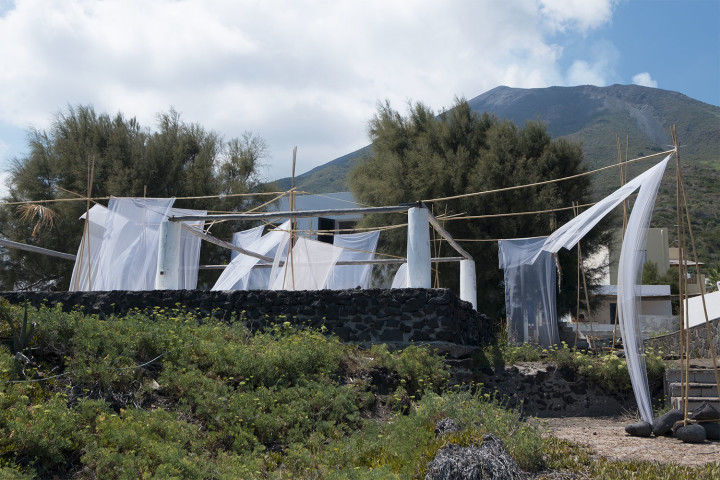 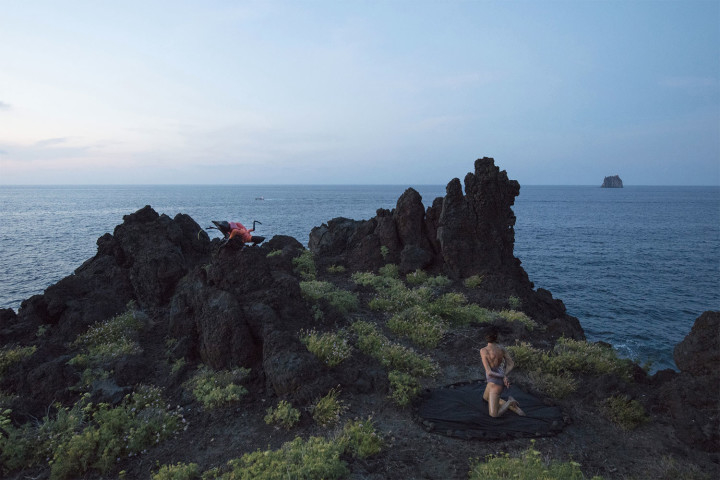 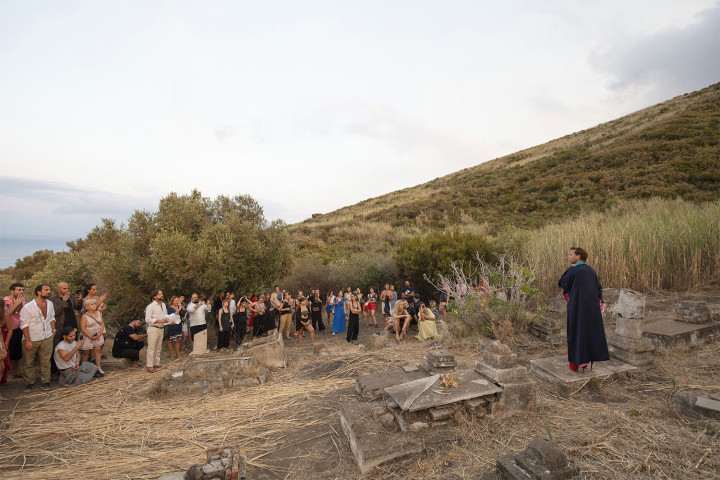 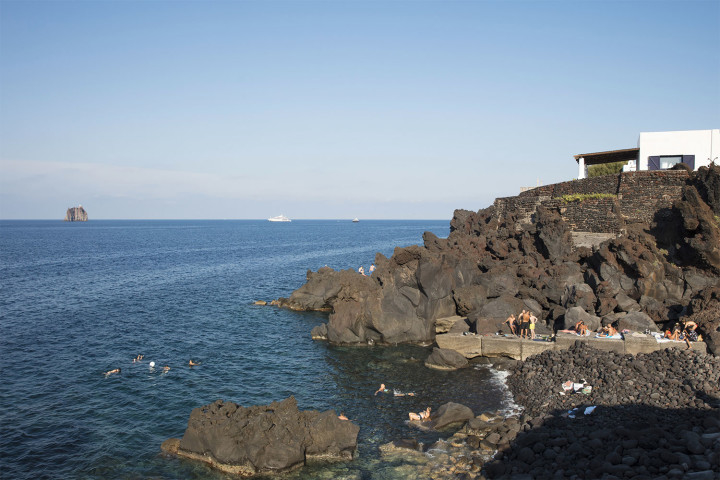 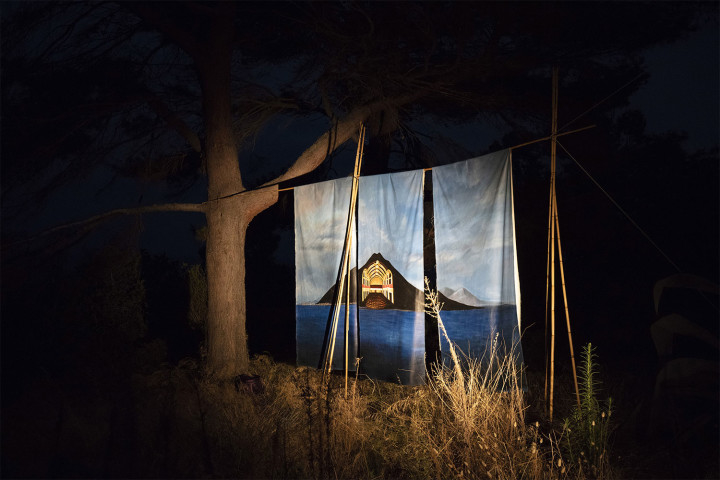 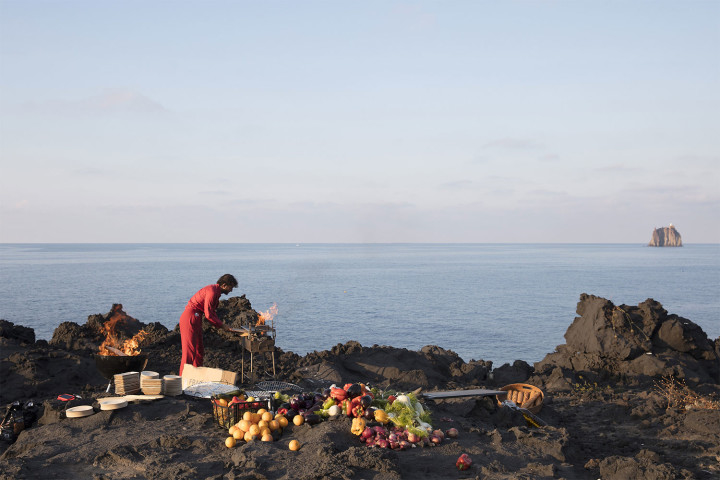 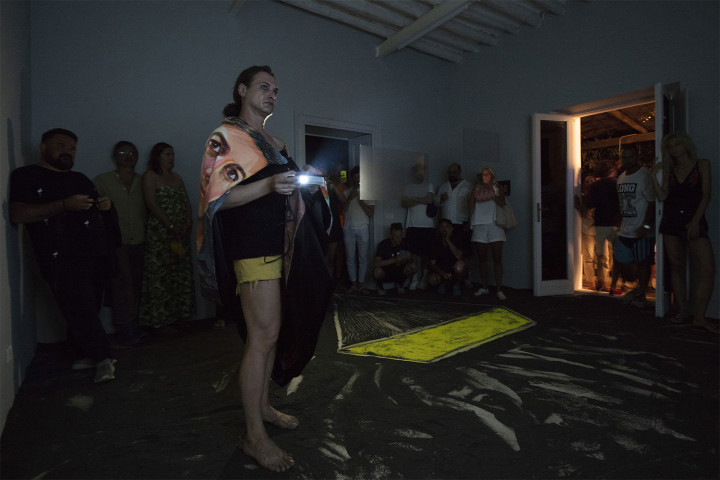 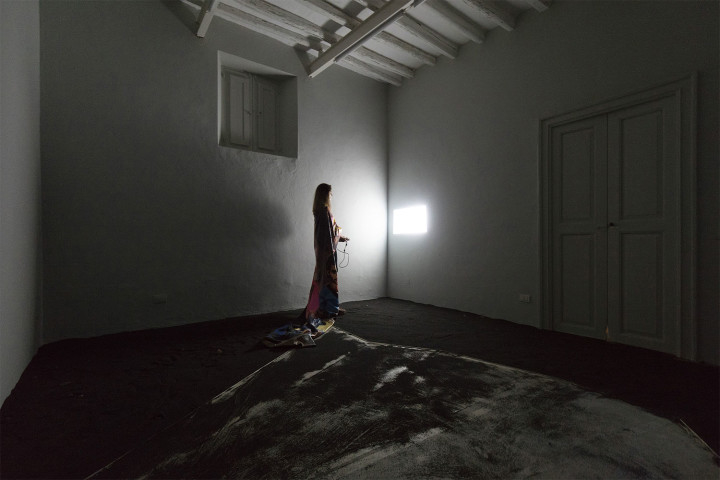 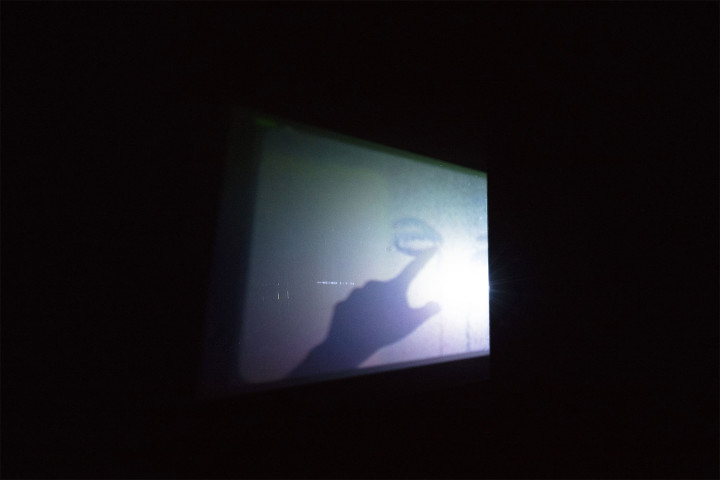 Quod non est in actis, non est in mundo: What is not in the documents is not in the world. The words of Philip II, king of Spain during the empire’s seaborne apex in the sixteenth century, might be taken as leverage to force the insularity of the Extravaganza experience.[1] “Total Anastrophes” is the eighth edition of the episodic art festival hosted by the Fiorucci Art Trust, curated by Milovan Farronato and this year led by the British artist Runa Islam, whose practice in films and videos can be semantically inscribed in a horizon of fugacity as much as retinal trompe l’oeil.

Impermanence, mutability, and precariousness define the structure and display of this edition of the festival, but also the nature of an island constantly exposed to climate phenomena and chthonic turbulence, which shape and reshape its image. The changes and strategies actuated to face them are nothing more than the quotidian of an insular existence, not even worth being crystallized in word and images, vivid only in verbal accounts. Volcano Extravaganza, which I have visited and participated in several times, shares the same destiny. Few material memories remain from the previous editions, but Camille Henrot’s erotic frescos still festoon one of the rooms of Nicoletta Fiorucci’s house, which clings to the volcano’s slope. The increasing ephemerality of the artistic manifestations, and the co-optation of more natural and anthropic settings, while transforming the extravagant island in a temporary metaxy,[2] seemed to urge the necessity of documenting the swift occurrence of life and art during the few days of festival intensity.

Immediate documentation via SAGG_napoli’s Instagram takeover produced fast feeds to be consumed outside and inside the art community present on the island; video and sound documentation I took will be edited by Runa Islam and will offer a second reading of the Extravaganza. Patrizio Di Massimo’s paintings paid ironic homage to characters as in the tradition of court paintings that aim to make eternal the memory of a lineage. Malala Andrialavidrazana’s mythological map is an allegorical visual document that shows the way to seafarers crossing the vestibule of La Lunatica.  Even the daily newsletter sent by the Trust can be seen as a prophetic and documentative act: informative missives as predictions, commandments, and auspice.

Iridescent gracefulness and impermanent beauty imply labor and fatigue. Behind the nocturnal marvel of fireworks is the reality of gunpowder. The quotidian sublime of the Extravaganza is the result of infrastructural concealment, of a restless activity that blends in with the scenario, once again revealing a non-fortuitous affinity with the island, whose intrinsic volcanic activity manifests in pure dazzling lights at night, and in brief but acceptable aural interludes during the day.[3] There is a lot of hard labor in effortless ease. It is the art of sprezzatura, perfectly incarnated by Milovan Farronato himself, whose statuesque presence sustained by extraordinarily high golden sandals seemed to appear directly from the sea foam, just a few drops on the forehead to attest his marine nature.[4] Yet only incessant everyday activity made the evening glamour possible.

Fightin’ the rust, the dust, and the dusk, Tobias Putrih’s architectural screens were erected in the patio of La Lunatica to host lights and moving images displayed during the first evening, and there remained as a reassuring presence for sailors, bathers, and mermaids. Stones were moved from their natural sites to choreograph the dinner that Lydia Ourahmane, with the help of Hiba Ismail and Giulio Ceruti, prepared and offered on the cliffs across the terrace.

Alex Cecchetti’s incessant voice rehearsals, whose saturated tone would silence the cicadas, were the necessary suffering for his poetic and humorous offerings. Dramatized lectures, a cetacean chorus performing in the darkness, and an account of the mysterious Australian Taman Shud cold case, reenacted by Cecchetti as a funeral procession and punctuated by a requiem sung by soprano Adonà Mamo, became a major part of the festival’s crepuscular enlivenment.

Every day and night some secret submarine operations were led to anchor, pulled out and put back again, for Lydia Ourahmane’s sound piece Music for two seas, made in collaboration with Nicolas Jaar.

Cecilia Bengolea’s evocative dance pieces, which punctuated the darkness of the lava stone with glimpses of blue flesh, required the discipline and training of the participant’s bodies, just as Osman’s performative presentation of a capsule collection at Casa Falk, inspired by festival themes, demanded patient sewing and assembling of disparate materials. As in a fable, the result of the sacrifice was majestic and transcendental: not clothes or costumes but newborn beings, entomic entities whose colorful patterning was beyond natural functionalism, effecting hermaphrodite seduction and distant self-representation.

“Eye > < Not Eye,” Runa Islam’s closing show, perfectly embodied the paradigmatic structural precariousness and fugitive, ineffable phenomenology of the “anastrophes.” A black sand mandala in the shape of a volcano was composed, and transparent screens and mirrors were installed amid a torrid day. At dusk, Haroon Mirza’s sounds provoked conditions for a cinematic ceremony. Projectors carried by hieratic vestals in Osman’s prodigious garments, worn and torn as if in the moment of an insect metamorphosis, liberated a filmic territory of reflections and repetitions, illuminating paths for the crowd invited to step on the sand drawing and partake in the ultimate act of renewal.

For days and nights, all has been relentlessly made, consumed, and destroyed. “This much was uncertain,” to paraphrase the title of one of Islam’s 16mm films, displayed at Volcano Extravaganza in 2011, and without doubt still circulating on the island.

[1]   For an in-depth analysis of documentation as a medium, cf. John Durham Peters’s The Marvelous Clouds: Toward a philosophy of elemental media (Chicago: University of Chicago Press, 2016), chapters 1, 6, and 7.

[2] Metaxy (μεταξύ) is a Greek term that describes the intermediate space between subject and object, where the real, turning into image, becomes perceptible.

[4]   Milovan Farronato and the possible origin of the insular medium space brings to mind a passage by Georg Simmel: “The ornament and all forms of cosmesis define a sort of ‘human radioactivity.’ They produce around each one a small or big sphere of meaning.” (cf. Georg Simmel, Fashion, 1957). From Homer to James Joyce, the peripatetic journey of Ulysses underlied “I Will Go Where I Don’t Belong,” the sixth…