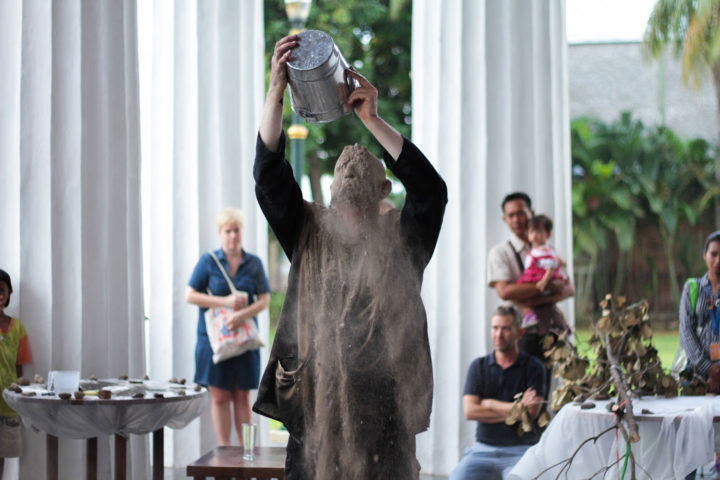 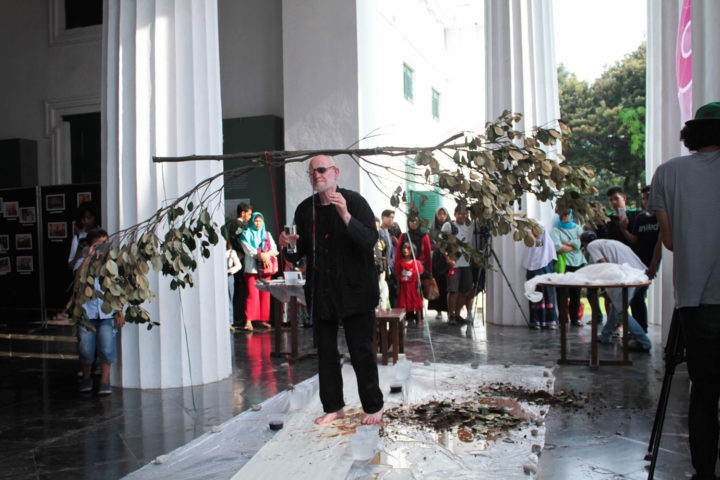 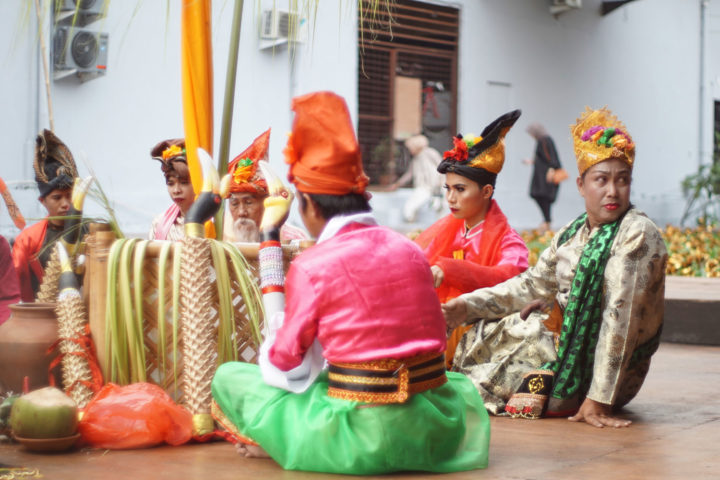 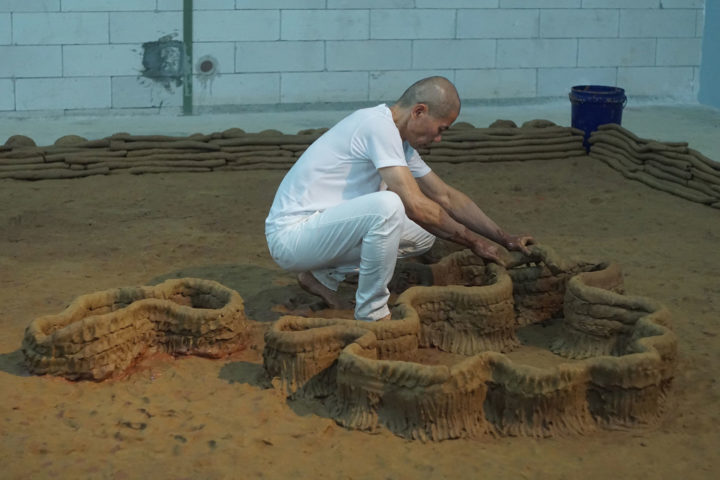 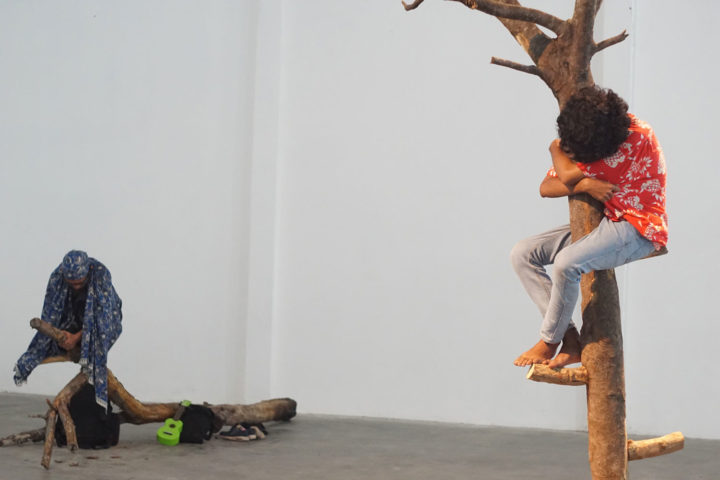 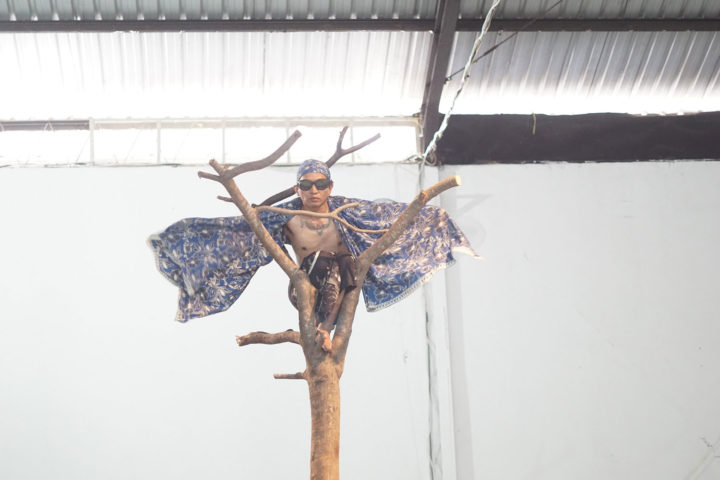 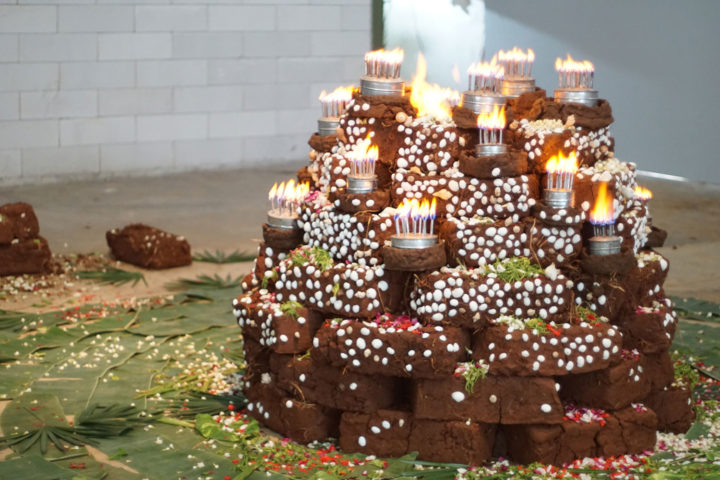 Jiwa (soul) is the conceptual framework behind the latest Jakarta Biennale, which proposes to place performance at center stage. Led by artistic director and performer Melati Suryodarmo, this edition is joined by curators Hendro Wiyanto, Annissa Gultom, Philippe Pirotte, and Vít Havránek, and much of the exhibition is comprised of new commissions. The team has established a clear curatorial premise, highlighting their interest in durational art and a wish to survey works from the archipelago that look beyond Javacentrism while pointing at regime-defying practices that deserve deepened art-historical research.

These concerns were carefully researched, leading to a renewed consideration of activist positions against the totalizing regime of Suharto, and the representation of syncretic forms of religion that were previously erased by the time of the Pancasila. Such is the case of the Bissu community, made up of the Buginese people of South Sulawesi, who have unique spiritual and societal beliefs with complex gender systems. Bissu members performed on the opening night, which included a screening of The Last Puang Matoa (2017), a film that addresses the murder of their last leader and looks at ongoing struggles of indigenous communities in the archipelago.

The diversity of the performance program was particularly notable, including various traditions and conceptual registers that informed the installations on display. Marintan Sirait restaged Butoh-inspired pieces from the 1990s, in which clay-covered bodies interacted with an installation of soil pyramids topped with yellow pigment. In the room next door, Ewa Kot’áková’s sculpture of a tree was activated by two performers who interpreted memories of becoming birds, expanding our understanding of Jiwa to that of pathological phenomenology and the social construct of illnesses.

On the previous evening, Darlane Litaay reinterpreted Papuan rites of fecundity by shivering to the sound of hypnotic synth drones. Before that, David Gheron Tretiakoff’s feedback trance ritual was performed over looped excerpts of Jean Rouch’s Les Maîtres Fous (1995), nearby the ghostly shadow of Luc Tuyman’s painting of a televised hologram, Twenty Seventeen (2017). As well as gestural narratives, storytelling was presented as a main form of local cultural expression. Audience favorite “Jiwa Laut” was interpreted and performed by Sumatran artist PM Toh, who improvised a sung narrative about a fisherman in a DIY cardboard scenario made with domestic utensils and stop-motion video projections.

The ceremonial quality of the works extended way beyond the mediumistic constraints of the performative realm. For example, Dineo Seshee Bopape’s fired clay and shell altar echoed voodoo trappings, and I Made Djirna’s labyrinthine installation of faces carved into lava rock, a brut gesture by this Balinese artist, was mirrored by the mesmerizing puppet silhouettes of Ni Tanjung, which resemble naive shadow theater figures.

Central to the Gudang Sarinah Ekosistem venue was a section dedicated to five artists focusing on installations and publications dedicated to activist Semsar Siahaan. This included paintings and excerpts from his latest graphic diaries; audio installations by experimental musician I Wayan Sadra, who challenged the melodic use of gamelan; Hendrawan Riyanto’s ritualized ceramics; and installations by Dolorosa Sinaga and Siti Adiyati. While highlighting radical figures in the country’s art scene, this section also acknowledged the need for further in-depth research on contemporary art history and the urgency of institutional action in a context of precarious museology.

At the Jakarta History Museum, a haunting critique of museology comes through in the film Sector IX B, Sleeping Sickness Prophylaxis (2015) by Mathieu Kleyebe Abonnenc, in which an anthropologist’s observations on archival objects are compromised by hallucinations due to the effects of a tropical sleep disease. In this venue, located in the main square of Jakarta, the echo of colonialism resonated through several installations, as seventeenth-century garbed Nikhil Chopra developed an enthralling clay and rice mural painting of an ocean horizon, and Em’kal Eyongakpa presented a site-specific sound installation of the overlapping heartbeats of independence leaders in the prison space of the building. Next door, at the Museum of Fine Arts and Ceramics, Darwin-based aboriginal film collective Karabing captivated with the decolonizing power of their film WUTHARR: Saltwater Dreams (2016), which addresses land expropriation and resource sharing. Their work was also a focus of discussion throughout the Jiwa symposium on indigenous beliefs, spiritual life and the role of bodies as a part of change.

And despite the improvisational quality of some installations, which are slightly undermined by their materiality, the impact of this year’s edition of the Biennale is more challenging than ever, placing the visitor amid durational experiences while restoring the urge for spirited gestures. Here, the formless contour of the political body — or Jiwa — is in pure potency, coming to life through the shared medium of storytelling and the common passage of time.

Margarida Mendes is a curator and activist based in Lisbon.