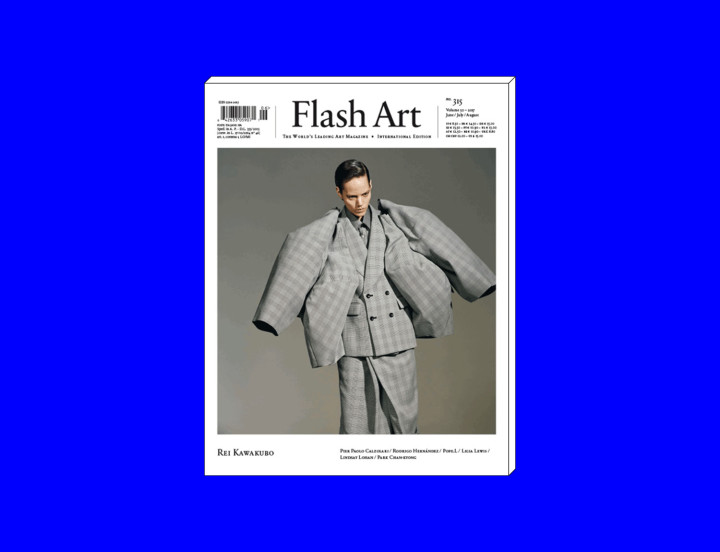 We are pleased to announce that the June–July–August edition of Flash Art International is out now. Rei Kawakubo is the cover artist for this summer 2017 edition. Having founded her label Comme des Garçons in 1969, Rei Kawakubo is only the second living designer (after Yves Saint Laurent) to be honored with a solo show at the Metropolitan Museum of Art. According to Jeremy Lewis, “What makes [her] clothes radical is that although they are not always recognizable as clothes, they were always meant to be worn.” Kawakubo’s deconstructed style –– raw and cerebral –– seems to take clothing outside of itself and to reposition it in a contemporary space nonetheless rooted within her own Japanese cultural tradition.

A season marked by global political uncertainty has foregrounded artist Pope.L’s long concern with just that: uncertainty, unknowability, misrecognition. In Whispering Campaign at Documenta 14, a fragmentary narrative is diffused throughout Athens twenty-four hours a day –– as it will throughout Kassel –– via city-wide speakers and wandering, whispering performers. In his conversation with Jibade-Khalil Huffman, Pope.L relates how he sees “language as a means of duration, and time as a way of making meaning.”

“There’s a weird temporality to Lohan’s public flirtations with Islam under Trump, as though she’s misplacing Islam in the mediascape. Popular media has neither clichés nor discursive tools by which to attach her actions — those regarding the Quran, refugees, the Arabic language — to meaning.”

Chiara Parisi asks Pier Paolo Calzolari about his life and career, from Arte Povera to his current New York show.

“In the 1960s reality was different, totalizing, dictatorial. There was a sort of aristocracy of art, not a democratic ‘dissemination’ of it, which instead I observe now.”

“Instead of beginning from the premise that we all know what the world is, that it is one thing, and that an artist can find some sort of Archimedean point above it, from which she looks down and produces art and commentary, Hernández’s work remains stuck in the swamp of the world.”

“In front of us, the dancers occasionally pause in a tense first ballet position, fists out at either side, before gracefully opening to a wide second and sliding into a discrete fourth before lunging into third position. Lewis maintains their tight stature: ‘Left foot!’”

“In Park’s narrative, the history of Korean shamanism embodies the violence of the grand narrative of Korean modernization.”

We are pleased to announce Flash Art’s participation in the 2017 editions of Art Basel and Liste.