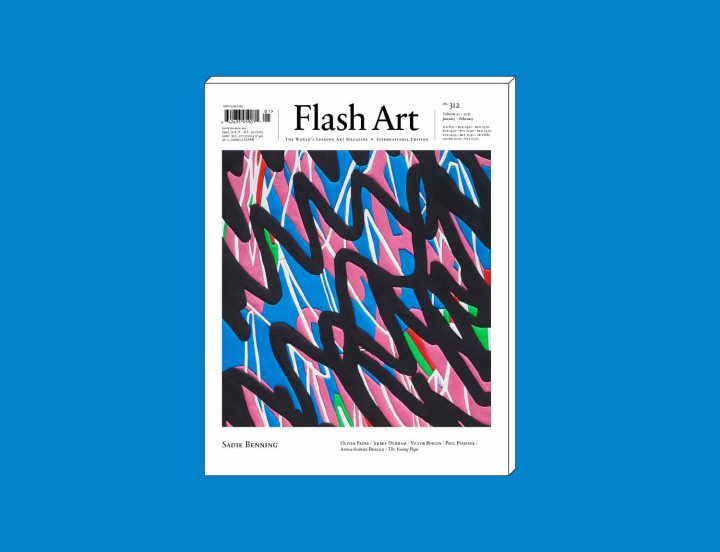 While reviewing past issues of Flash Art, we stumbled upon an article by British artist Victor Burgin discussing the show “Difference: On Representation and Sexuality,” held at the New Museum, New York, in 1984. According to the show’s press release, it was premised on “recent interest in the issue of representation [that] has prompted many artists to explore the cultural formation of our notions of sexuality.” In Burgin’s article, which we reprinted as this issue’s “Time Machine,” he analyses in terms of the “difficulty of difference” the critical response against the “political conceptualism” embraced by many of the “Difference” artists, whose works were dismissed as démodé during a time when formalist and expressionist fashions were ascendant. “What was at issue in the work was not a transient aesthetic form but a long-established semiotic form — text/image — encountered in most aspects of the everyday environment.” Defending his and his fellow artists’ lack of concern with the development of a recognizable style, Burgin explains that “the work of such ‘works of art’ was upon systems of representations which were not confined within the institutions and practices of ‘art.’” Amid the hostility encountered by the “Difference” works, Burgin discerned “a reflex refusal to admit difference that has more to do with our ‘large-scale’ politics than we care to imagine.”

This issue of Flash Art takes Burgin’s meditation as a starting point to stimulate a discourse around difference within the current political climate. On the one hand, as theoretician Walter Benn Michaels suggests in this issue’s “Macro,” reflecting on the recent Kelley Walker show at CAM St. Louis, the politics of representation may be a red herring with regard to the problem of economic inequality and the critique of capitalism; on the other hand, artist Jimmie Durham, also featured in this issue with an essay by Jennifer Piejko, boasts a lifelong engagement in civil rights struggles, mastering the “specificity of the political in art” that emerged through the political dissensus of Burgin and his fellow “political conceptualists.” To highlight a vivid distinction between the representation of politics and the politics of representation — both in art and in life — should be our goal for the year we are entering.

“Benning possesses a singular ability for identifying the most elusive spatial and temporal shifts in form and further embodies them across different media and mediums.”

“As much as Payne’s objects and images present a glimpse onto other worlds, they are two-way portals — the gaze passes this way as well.”

In conversation with Assistant Editor Alex Estorick, Paul Pfeiffer addresses what the age of augmented reality means for art.

“I’m trying to find a form that includes a jump from one dimension of reality to another, because in a way that’s the aesthetic experience essential to our consciousness now.”

Associate Editor Laura McLean-Ferris talks to Anna-Sophie Berger about the care and attentiveness at the heart of a social life.

“To me care is not confined to the realm of objects but is naturally also expanded to care of oneself — notions of the fragility of life and finitude as an ultimate bracket to existence.”

“In The Young Pope, the sovereign is left with little to do other than exercise free will, in its more or less rational manifestations.”