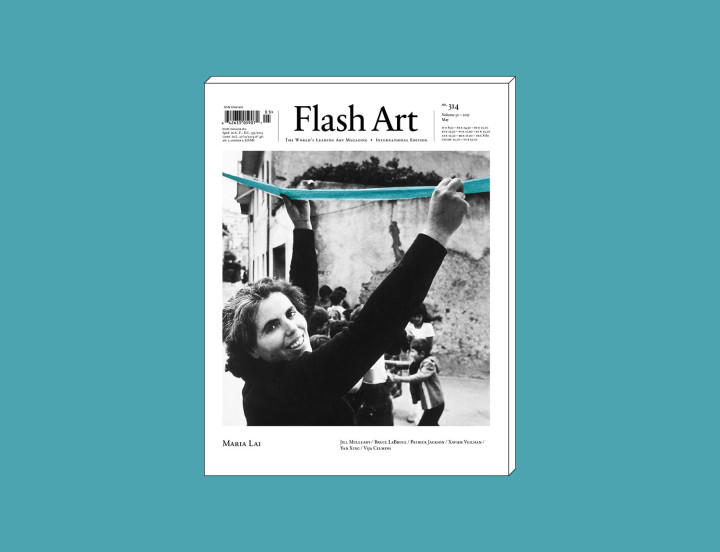 We are pleased to announce that the May edition of Flash Art International is out now. The issue’s cover is dedicated to the late Italian artist Maria Lai, whose work is on display at both Documenta 14 and the 57th Venice Biennale.

Lai’s art developed in response to an art industry whose heteropatriarchal worldview — her teacher Arturo Martini saw her as a “little girl” from a terra vergine — became grist for projects of collective empowerment. The cover is a photograph from Lai’s action Legarsi alla montagna (Tying Oneself to the Mountain, 1981) in which the artist physically connected the inhabitants of her native Ulassai with a single ribbon, tied from house to house and up the mountainside overlooking the town. Barbara Casavecchia, who profiles the artist in this issue, calls Legarsi alla montagna “a contemporary rite for conquering the fear of being devastated, wiped out, cancelled.”

Lai’s projects, committed to tearing down normative understandings of the self, resonate with filmmaker Bruce LaBruce’s responses to today’s controversial and rapidly mutating gender discourse. His latest film, The Misandrists (2017), narrates the actions of a secret cell of feminist terrorists plotting a new female world order, pandering to the “male gaze” while audaciously subverting it. As LaBruce explains to Bruce Benderson: “I insert myself in the film as a nun, in drag, as a way of distancing myself from my own gaze, or making it self-conscious, to myself and to the audience. At the same time, the lesbians in the film are making and directing their own pornographic film, and that film, at some point, becomes the film we are watching. So in a sense the characters take over the making of the film.”

Ciara Moloney unveils the Apollonian and Dionysian in the work of Jill Mulleady.

“These works suggest that the restless nights filled with uneasy dreams will always take place amid the mundane reality of everyday life, the inference being that such phantasms are as workaday and banal as the washing-up.”

Xavier Veilhan, Christian Marclay and Lionel Bovier talk about their collaboration for the French Pavilion at the 57th Venice Biennale.

“Duration really plays a central role, because if visual art falls within the domain of the instant, music comes in to impart its implicit chronology to the project.”

In his discussion of Patrick Jackson, Associate Editor Eli Diner addresses what it means to “know yer city.”

“Whatever distinct signification we see in, say, the stoic black male youth or the menacing bearded white guy, the overall effect of this typology of countenances is, more than anything, the surface and texture of urban experience.”

Surveying the art of Yan Xing, writer and curator Boliang Shen notes a predilection for absence.

“However, absence also signals an act of extreme passivity. To some extent, to make art is not to create from a position of authority but to do so in the absence of power.”

Jeff Rian asks Vija Celmins about the conscious and unconscious processes that bring art to life.

“One of the reasons that I make small paintings is that I want you to grasp limits. Okay, the ocean is vast and amazing, but the painting has limits: it’s a controlled object; you can see what it’s made of when you get close to it. At maybe ten feet it goes flat. It lives through your interacting with it.”