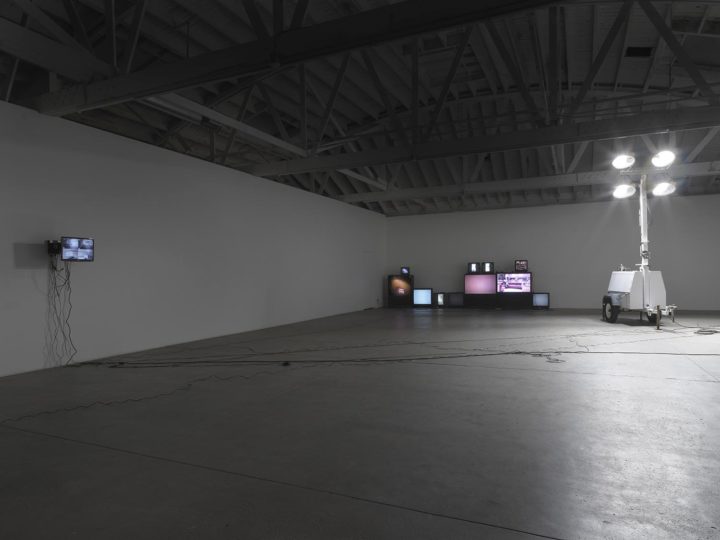 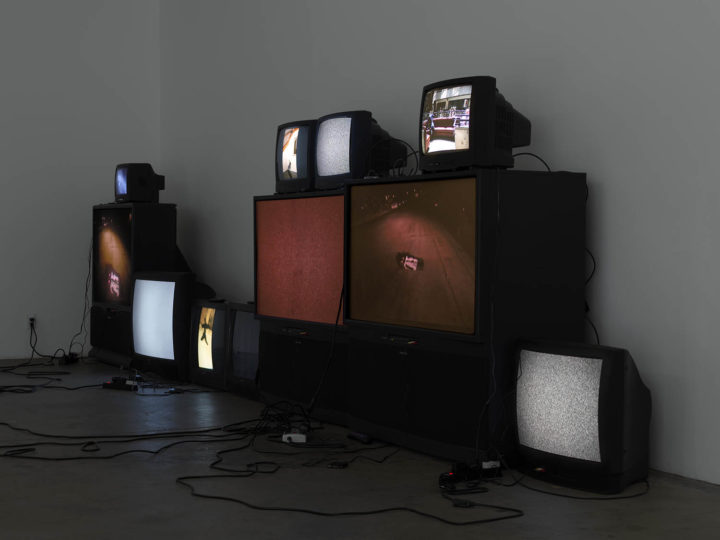 Despite being indoors, the show is lit solely by the kind of big mobile floodlights that feature in eerie drive-bys of midnight roadwork. Diamond Stingily’s “Surveillance,” likewise, pushes a startling crispness out of the black.

The lights are the biggest thing going. Here and there in the wide space are black and brown fabric dolls, ranging in size from a few inches to the stature of toddlers. Some have button eyes, others dresses; a number are simply rough bundles of thread. They are propped into corners or against utility panels, alone or in pairs, both hiding and pinned in plain sight.

The wires trailing between the gallery’s two large rooms allow you to trace the relay: four security cameras in each space feed to a flat-screen monitor in the other. The white walls and concrete floors are nondescript enough that it’s not clear who is watching who, and you almost expect to see yourself on screen — but the layout makes this impossible. The setup recalls certain video relay/delay works by Dan Graham, but maybe because surveillance and self-veillance are now so quotidian and complete, Stingily’s is a joke without mirth.

The gallery’s warehouse windows are papered over with the New York Times — pragmatically, sure, since the artist lives in New York — but it also turns a gallery that could be a sunlit storefront or otherwise open to the public into a dim, secretive space. Such a warehouse could be a mafia hideout or a sweatshop, but is more likely a banal, honest, private enterprise. The CCTV rig, too, is a flat, off-the-shelf technology. And if the weird lights and unblinking cameras seem vaguely ominous, it is partly because Stingily calls her show “Surveillance,” and wraps the show in news meant to sell newspapers — as if information overload is the only good camouflage left.