“VIVA ARTE VIVA” is the title of the 57th International Art Exhibition in Venice, curated by Christine Macel. The exhibition will be open to the public from Saturday, May 13, to Sunday, November 26, 2017, at the Giardini and Arsenale venues. Flash Art spoke with Christine Macel.

“VIVA ARTE VIVA is a biennial designed with artists, by artists and for artists.” The 120 participating artists and their practices have helped shape the structure of the exhibition around nine “chapters” that constitute moments of pause, reflection and confrontation, offering a range of viewpoints into the artist’s creative process. These include the “Pavilion of Artists and Books,” in which viewers can immerse themselves in the atmosphere of the artist’s studio; “Open Table (Tavola Aperta),” where artists will meet and converse with the audience; “Artists Practices Project,” a series of video projections made by the artists about their way of working; and “Unpacking My Library” — inspired by the eponymous Walter Benjamin essay — in which the artists talk about books that nurtured their process.

What was the reaction of the artists when you invited them to share with the public a more intimate view of their practice?

The artists have responded very positively to all parallel projects. In February we began to upload videos about each artist’s practice to the Biennale website, and this will last until the day before the opening, with more than one hundred videos available. By watching them, one gets the feeling of meeting the artist on a very special level, either through a sort of documentary that shows the studio, or in the moment of the making of a piece, or even through a sort of statement that can be sometimes cryptic but reveals a lot about the way the artist wants to represent his or her way of working.

For instance, the piece by Charles Atlas, in which he has asked a comedian dressed as an old professor to talk about him, is frankly hilarious, and it is in keeping with the heritage of West Coast performance; while the video proposed by Philippe Parreno remains quite mysterious, with an octopus filmed in its aquarium in the studio of the artist, an animal that has always been central to his imagination. The response to “Open Table (Tavola Aperta)” has also been impressive. You will have the chance to follow the process via streaming video — if not seated with the artist over lunch in Venice. This practice of conversation has always been so important for artists and curators that I wanted to extend it to the public, who is outside this reality. The project “Unpacking My Library,” which will be visible in the show as well as the catalogue, is now a sort of giant library to which the national pavilions will also contribute, creating a space to read, hang out or take notes in the Stirling Pavilion of the Giardini. All these books reveal a lot about the artists’ worlds and thoughts. I was, for example, surprised to discover that Senga Nengudi is inspired by Rumi, and this told me a lot about the more spiritual dimension of her practice.

How will the space devoted to creation evolve? From the painter’s atelier to the portable or immaterial studio, artists are constantly traveling around the world for residencies, projects and exhibitions. By presenting an artist’s studio at the Biennale, does it preserve its authenticity? Could the Biennale be a place for a collective production of knowledge?

There won’t be studios, but artworks dealing with the idea of the studio. It is more about representation, about the studio as a theme in the artist’s world. But here the perspective is a bit different. It is not so much about given images of the studio than positions of artists toward the studio as a place for idleness and quite intimate thoughts (otium) or as a sphere open to the public (negotium), with a tension between the necessity of being with oneself and the desire to open the studio to a dimension of communal life. This is visible in the room devoted to Franz West, in works dealing directly with the notion of otium, which was a real issue for him; and in the work of Dawn Kasper, who will move in with her studio in a six-month performance. Olafur Eliasson has created a space for his Green Light project, which evokes his way of working in the studio in Berlin, that is, like a collective laboratory.

Can you share few examples of how some of the fifty-two works realized specifically for the Biennale reveal aspects of the creative process?

The creative process is a point of departure and is developed in the parallel projects. Then, of course, I hope that it will help the viewer to encounter the works with a different approach. This understanding will be deepened through the catalogue, which has more than six hundred pages dedicated just to the artists, with a lot of material, images and texts that tell a lot about their own worlds. The show itself is a sort of organic narrative that goes from the artist toward different dimensions through nine “Trans-Pavilions,” because they are transnationals. It draws a movement of extraversion toward the other, the environment, the unknown, in a sort of gradation. It will engage the viewer in a journey that addresses different dimensions of life, and it should provoke a lot of perceptions and thoughts about the necessity to rethink relationships — even the more speculative ones. Let’s take one example: Abdullah Al Saadi shows some boxes with texts in Arab, his own diaries, in the “Pavilion of Artists and Books.” When you look at his video, you understand how he works, on a small table at home, and you see his relationship to his beautiful and modest natural environment on the mountain of Khorfakkan (UAE). His solitary practice, introverted and also open to the immediate surroundings, from his family to the arid mountains around his house, becomes clearly understandable.

The number of artists participating in the Biennale for the first time is quite surprising (103 out of 120). Some of them are very young, like Katherine Nuñez and Issay Rodriguez from the Philippines (born in 1992 and 1991), while some artists are still largely unknown despite the importance of their work. Is there a convergence between the works of younger artists and works from the 1960s and 1970s? Does an artwork possess a prophetic character?

There are some works from the ’60s and ’70s in the exhibition, carefully chosen, that address some specific issues that I consider crucial for our time and that are in resonance with a lot of contemporary artworks. The “Pavilion of the Common,” for example, clearly shows a lot of older positions dealing with the issue of the common — how to build something in common in a time of strong individualism. Works by artists such as Maria Lai and David Medalla are still valid and being discussed by younger artists like Martin Cordiano, Yorgos Sapountzis or Marcos Ávila Forero.

The exhibition is articulated into nine Trans-Pavilions, whose names are very evocative, in particular “The Pavilion of the Shamans” or “The Dionysian Pavilion.” Is spirituality still alive in contemporary art today? Is it experienced or seen through an anthropological lens?

The anthropological approach has always been crucial for me, and I can see how artists themselves are deeply concerned by this kind of research. Maria Lai, for example, who is so interested in the ways of living and thinking in her native Sardinia, has rooted her works in her community of Ulassai and also the earth. Juan Downey, Ernesto Neto, Ayrson Heráclito, Abdoulaye Konaté and so many others in this biennial have all developed their work with a deep anthropological concern and a true sensibility toward some specific communities and their social practices. On the other hand, I see a lot of artists dealing with more spiritual dimensions of life. Take the example of Younès Rahmoun, a Moroccan artist based in Tétouan, who has a very conceptual practice based on the idea of the house/ghorfa. His thinking is deeply rooted in Sufism. To develop this type of work he has lived as a hermit under a staircase in his parents’ house. Again, it is not something new, if you think of On Kawara, for example — his date paintings address the question of time and infinity in a sort of conceptual/metaphysical way. The difference is that our times make these questions even more urgent, again because some artists envision themselves as “missionaries,” as Marcel Duchamp used to say, without any esoterism or reactionary movement against reason, but through a consciousness of a deeper meaning of art and the necessity to transform our reality. Ernesto Neto, for example, after his experience with the Huni Kuins, with whom he lived in Amazonia, said that it is not a time for revolution but for transformation. This can of course be discussed, but it is a significant statement.

In the press release, we read that the pavilions “flow together like chapters of a book” — they are “nine episodes that tell a story.” Is there one (or more) literary source that inspired “VIVA ARTE VIVA”?

Not directly, but I am an obsessive reader, and my own universe is full of books. The show is a show, but the titles I chose for the different chapters, which are not separated physically in the space but are only mentioned in the leaflet like an indication, are indeed like titles of books, more evocative than didactic. I hope they will activate the imagination of the viewers, which are to me, along with the artists, an essential actor in the exhibition. 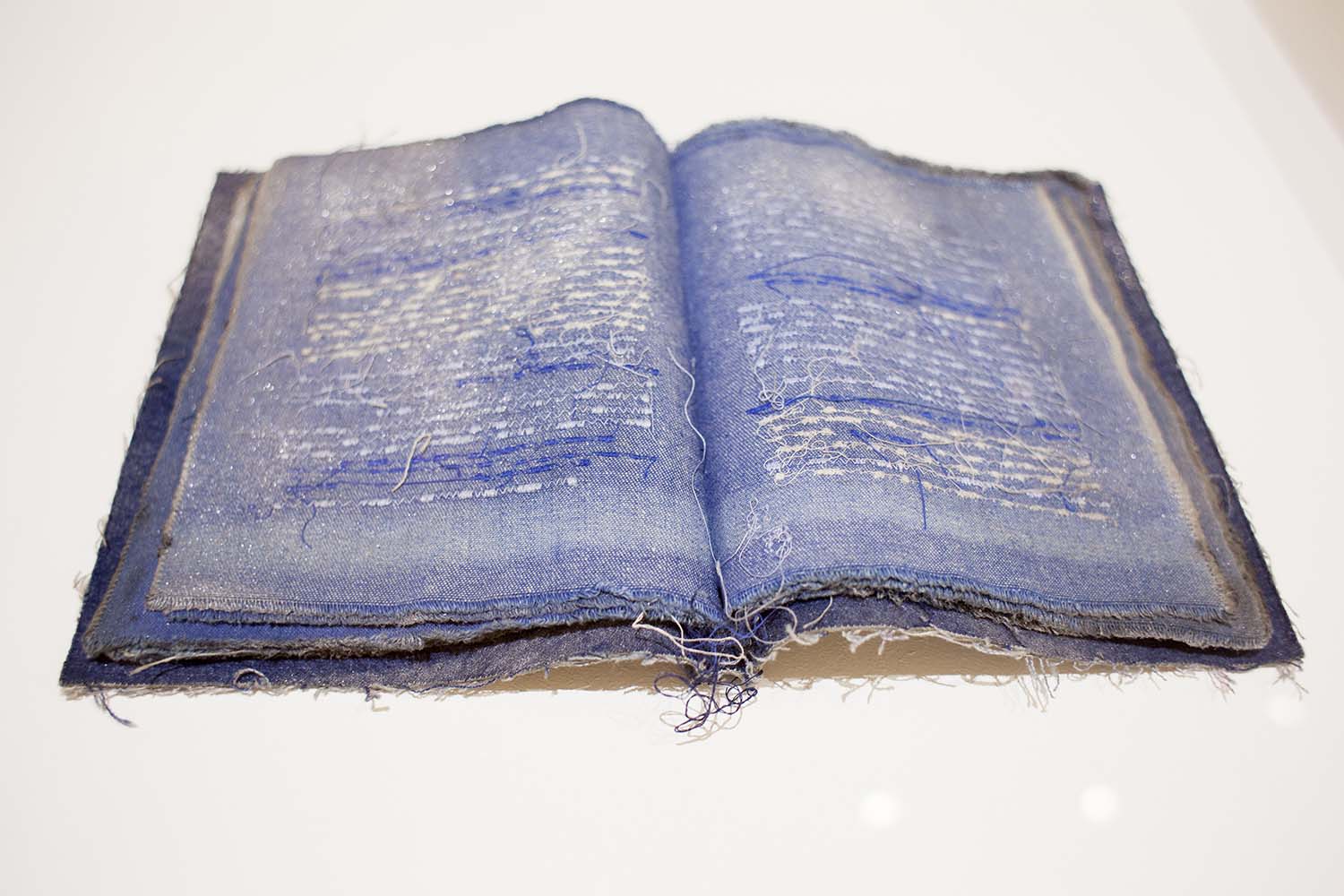 At the Sterling Pavilion I find a copy of Representations of the Intellectual by Edward W. Said (Vintage Books, New…