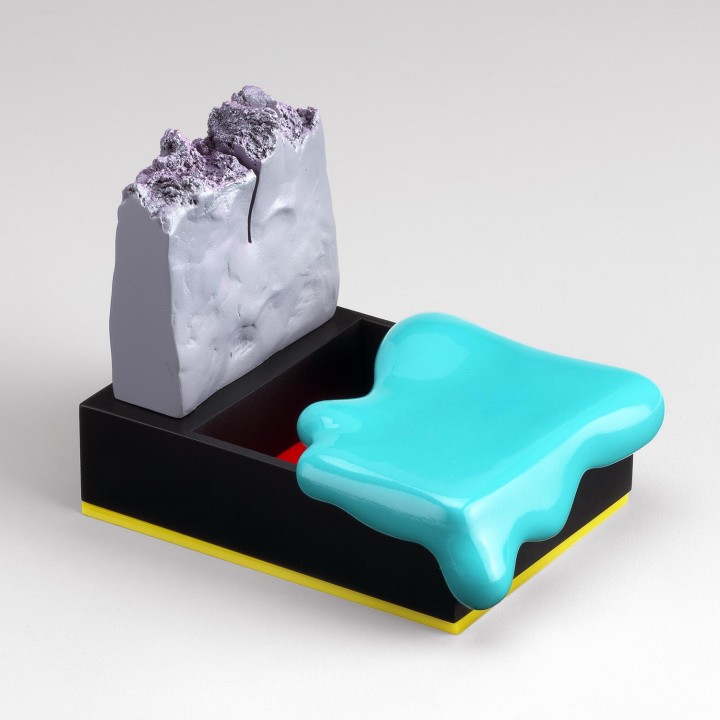 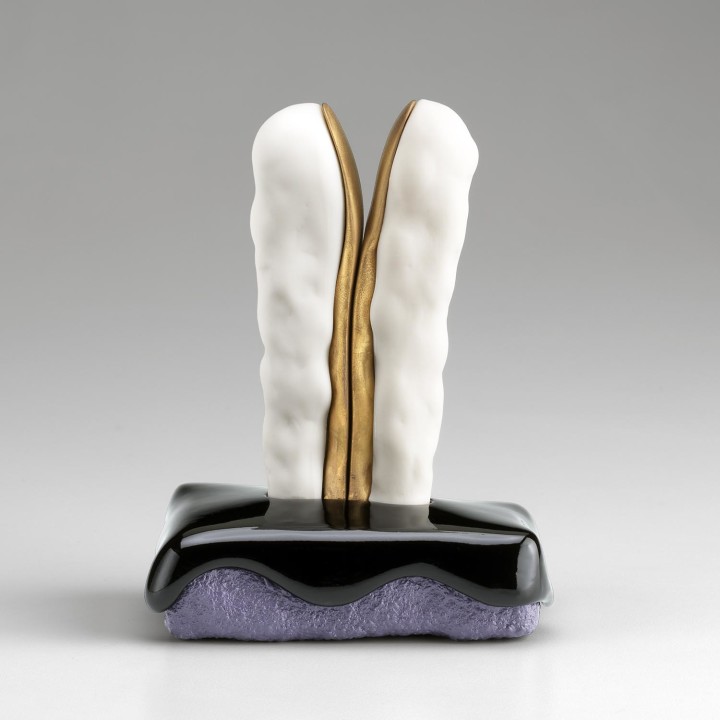 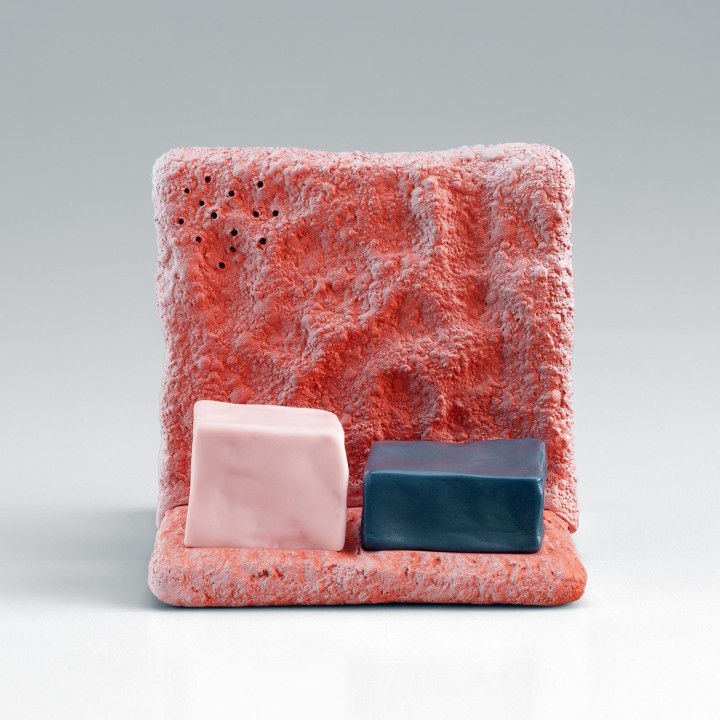 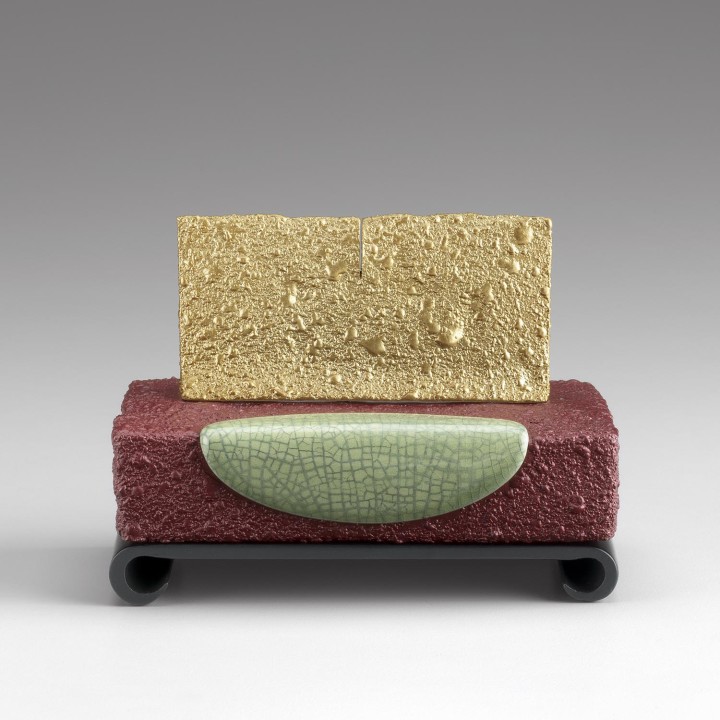 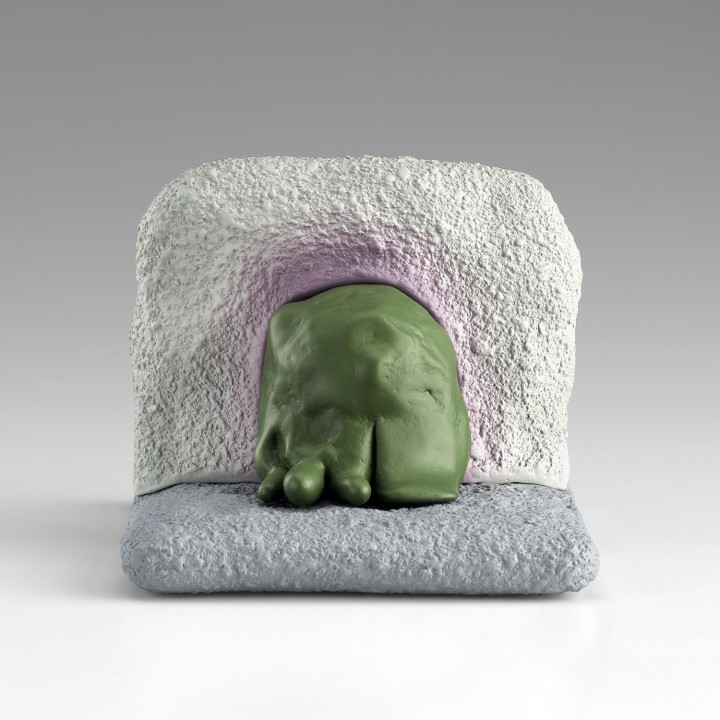 Ron Nagle’s landscapes float beautifully atop plinths in “Ice Breaker,” the artist’s current exhibition at Matthew Marks Gallery in Los Angeles. Each scenic vista sits in its own display case under glassed circumspection, wherein the miniature ceramic-epoxy-paint sites can be flipped through as brochures for exotic vacations.

Just as glossy images in magazines can become one’s only contact with the outside world — the beguiling, foreign lands of Diana Vreeland’s editorials are a case in point — Nagle’s maquettes grant the fantasy of far-off Lilliputian blue holes and Japanese tea rooms, ectoplasmic Kleenexes and stumps imbued with all the Romantic symbolism of Germanic forests. What happens on these atolls is left to the mind’s unexpected movements and, from there, it’s just one fantasy after another, like so:

One looks over a girl skinny-dipping in a man-made pool in Texas, her pink, pear-shaped bottom seen floating with dead leaves amid barren land (Intangible Assets, 2016). Another sees pearl-clad Japanese professionals in Real World Tokyo being served with “maybe a little zinger of Shibui.”¹ The scene is colored in the cracker beige, barely blue and berry tones of tearooms filled with politely screaming twentysomethings (Glorious Assemblage, 2016.) Elsewhere, a subtle landscape suggests a Morandi green come true (Witzelsucht, 2016), its colors mirrored in Don and Juan (2016.) The latter is nice to think of as a tableau of Roquefort-sur-Soulzon in which a young man is eating a sandwich of ewe’s cheese upon a mountain pass. Across the way, a woman with flaxen hair passes by. Enamored, he follows her with a rosy blush, but not without first stashing his lunch in a cave. Months go by until the man returns; by then, his cheese is a moldy, growing green.

The aforementioned stump could be a vision of Caspar David Friedrich waiting for Caroline to text him back (Ghosting, 2016.) Littlest Murmur (2016) is a set perfect for two shoplifting teens hiding behind pink ottomans shaped like Turkish delights; two security guards search for them, threatening to call the police, unless the girls do them some wanton favors. Accidentally, they snicker from behind the confections and are caught. This work shares a sinful plushness with Message to Raphael (2016), which nods to its High Renaissance namesake. Seen from a particular angle, the eye sinks into pale décolletage, undeniably a picturesque landscape with cleavage cut in gold.

There are more, but overall, the colors and verbal forms, flights of fancy and odd exchanges, are what foster giggles, lewd thoughts and unexpected encounters with one’s own mind. As promised, the tension is broken between a visitor feeling foreign in a familiar context and Nagle’s native language.