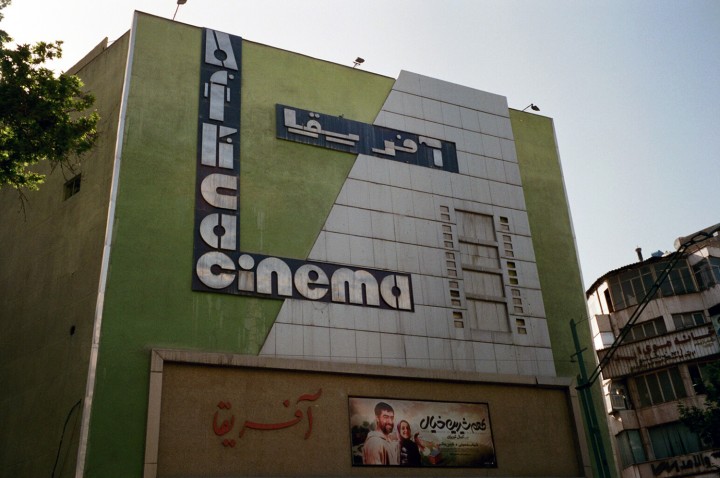 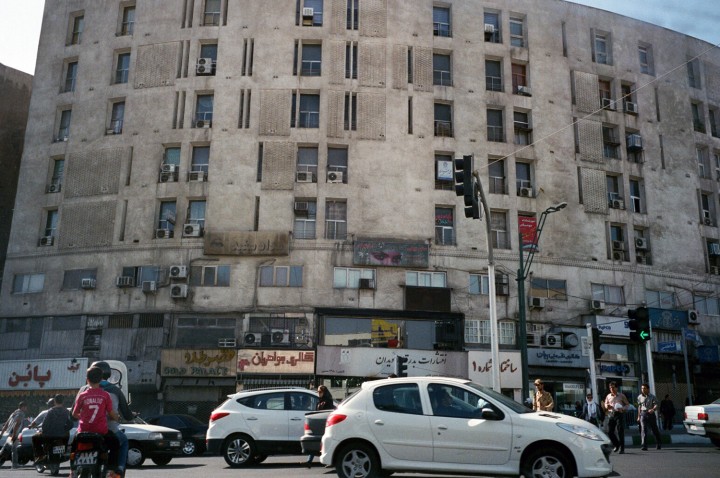 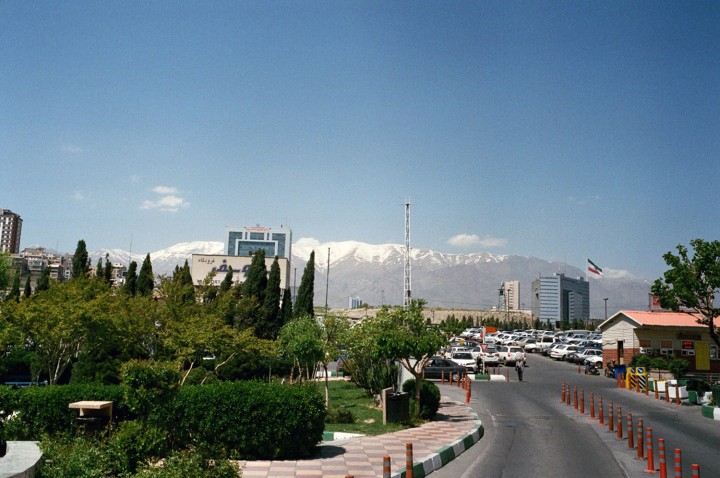 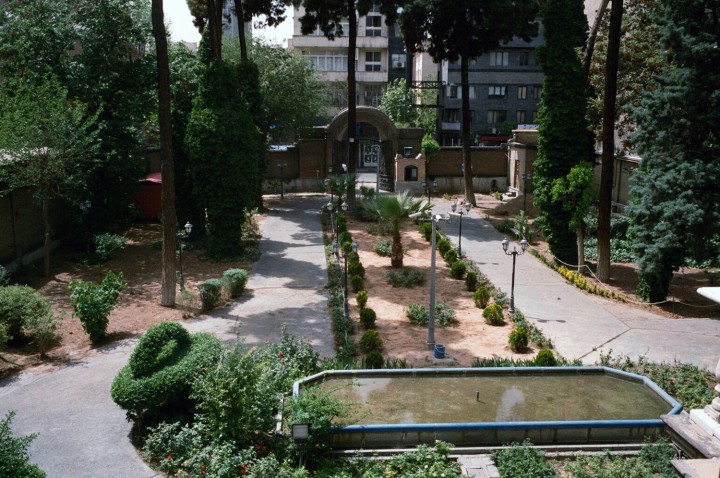 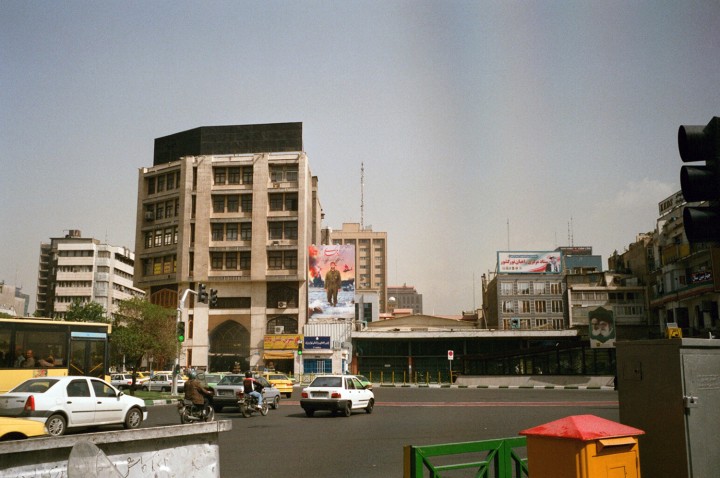 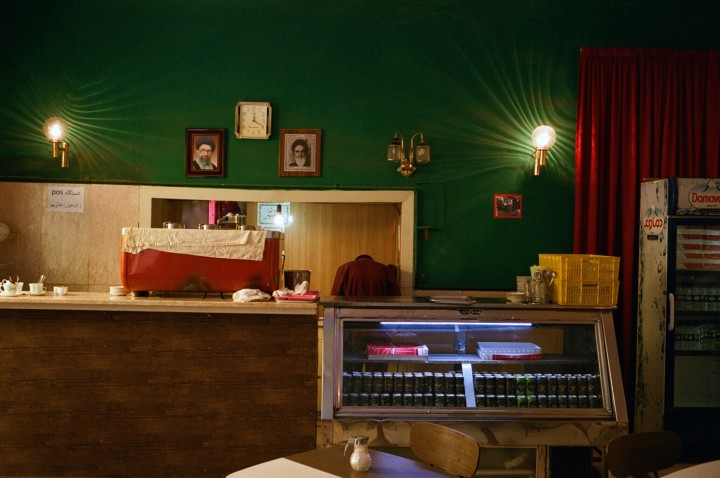 “You came from a strange, unknown city; you came on a white horse of kindness,” sings the velvet voice of Iranian pop-star Googoosh, the mesmerizing singer, dancer and actress silenced by the Islamic regime in 1979. I land at Tehran International Airport at three in the morning after a long journey from Los Angeles via the shiny Gulf hub Dubai. The next day my Polish mother, who spent her 1970s in Paris surrounded by Iranian friends, and whose fascination with Persian culture punctuated my childhood, orders breakfast in a seamless Farsi at the hotel restaurant.

Googoosh’s Gharibe Ashena [Familiar Stranger] resonates all over the taxi as we cruise along the tree-lined Valiasr Boulevard, passing modern malls, luxurious villas and the Alborz Mountains on the horizon. As we drive by Cinema Africa, a remarkable 1964 building with a constructivist green façade, I think about the significance of car interiors in Iranian films, as private spaces where things can be freely said and done. Abbas Kiarostami gave a beautiful talk about his movie Ten at MoMA a few years ago, describing the relief of entering a car in Tehran. Jafar Panahi was recently awarded the Golden Lion at the Berlinale for his film Taxi Tehran, a documentary-fiction set inside of a taxi driven by Panahi himself, and starring Tehranis talking about their lives.

My fascination with Iranian women keeps growing day after day. Famous is their beauty; less so the fierceness in their eyes, the determination of their silhouettes and their endless tactics to exist under the hijabs of the Islamic Republic. I recall Marjane Satrapi’s humorous and heartbreaking description of her veiled childhood in the blossoming Islamic Republic in the graphic novel Persepolis. There are 1001 ways of being head-covered in Tehran – some black chadors for sure, especially in the south of the city, but also colorful long scarves, stylish patterns and white outfits. Women use color as a form of resistance, and as a bold opposition to darkness in all of its tones and motifs.

We head to the Abgineh Museum of Glassware and Ceramics, located in an old Qajar edifice in the city center. Here you encounter a collection of blown-glass artifacts and ceramics, but with the particularity of a stunning modernist display of pedestals and vitrines made of steel and chrome, and designed in 1978 by Viennese architect Hans Hollein. Later I meet with artist Shabahang Tayyari at the café nestled inside Iranshahr Park. We talk about absurdity, isolation and the frustration of perceiving the world though TV, the Internet and social networks, while not being able to get a travel visa. Iran seems so outside of our globalized world, yet so close to us with its sophistication. We hop a taxi to Vahid Sharifian’s studio, where a large pool table officiates among his sculptures and the classical miniatures painted by his grandfather. He owns a stunning collection of outfits and costumes, from the Qajar period until today. We drink tea while watching a slide projection of hundreds of portraits he took with the women who visited his studio during the years his passport was confiscated.

The next day Shervin, a musician and art editor, and his architect friend Abi take me on a tour around Ferdowsi Square, where you see the most prominent propaganda murals adorning the walls of several buildings. The street iconography of Tehran is stupefying: on the one hand, street art is an obvious means of political propaganda, with large murals depicting armies of martyrs from the Iran and Iraq war, the hidden Imam, and Ayatollahs Khomeini and Khamenei, whose pictures are everywhere; no doubt, big brothers are watching you always. On the other hand, and just as I was leaving the country, the mayor of the city replaced all the commercial banners with reproductions of Picasso, Van Gogh and Rembrandt paintings. We finish the day at the Museum of Contemporary Art in Laleh Park, built in 1977 under the urge of Queen Farah Diba. Renowned for its exceptional abstract-expressionist and postwar collection, notably of Robert Rauschenberg’s paintings, since the Revolution these works have been very rarely, if ever, exhibited.

The white horse of kindness takes me back to the airport, and I remember that one of my mother’s friends used to say that we, Westerners, could never ever live in Iran — not because of the regime or the Islamic law, nor because of the language, but simply because people in Iran are too nice, too delicate and too attentive to others, and that we would never be able to stand it. A feeling of strange familiarity overwhelms me when it is time to leave the softness and complexity of Tehran.

-Hafiz, for your sake, entered this tale- Walk with him, say farewell, he’ll tear the veil. —Khajeh Shamseddin Mohammad Hafiz… 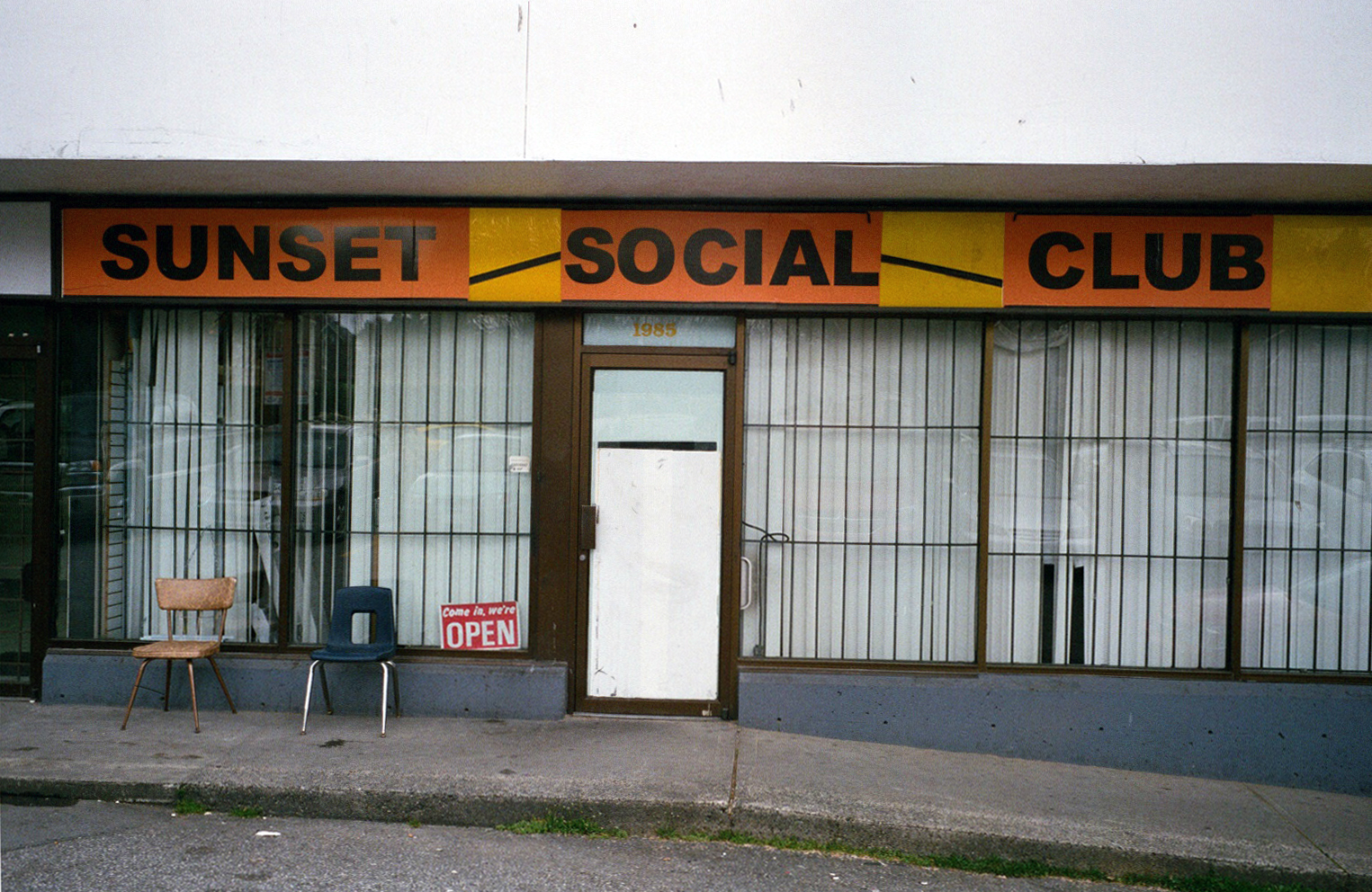 I land in Vancouver on a fairly gray and cold mid-March afternoon. The taxi passes skyscrapers amid a backdrop of…