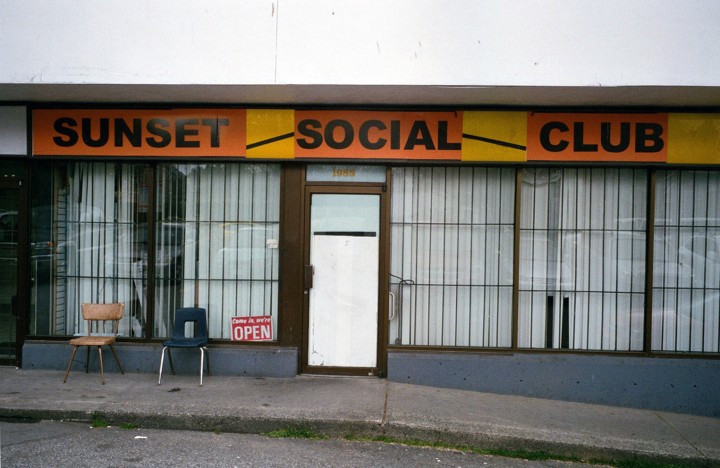 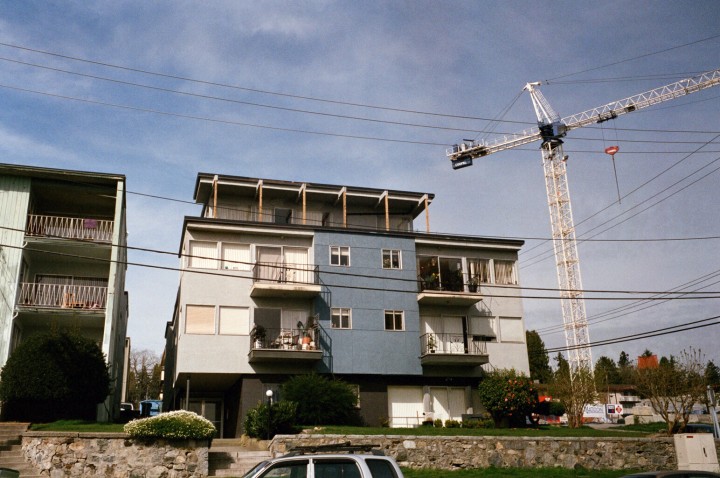 I land in Vancouver on a fairly gray and cold mid-March afternoon. The taxi passes skyscrapers amid a backdrop of emerald-green trees and glaring blue mountains on the north shore. As we drive down Davie Street, I recall the very first minutes of Hookers on Davie, the 1983 documentary by Janis Cole and Holly Dale, depicting Vancouver’s West End at a time when the neighborhood was a beacon for the city’s sex workers. My room at the historic Sylvia Hotel, at the foot of Davie, overlooks the very chic English Bay and its impeccable joggers. That night, we head over to a screening and reading at Model, an artist-run space and the studio of several local artists in the Downtown Eastside. Andrew Berardini delivers an intense excerpt from his upcoming book on colors, concluding with his definition of Puce: “A smashed flea filled with your blood stains puce.” This is followed by “Fetish and Figure,” a film program I put together on the fetishization of objects and bodies, which begins with Kenneth Anger’s 1947 short film Puce Moment.

The legendary Vancouver rain catches us the following morning while I prepare my afternoon talk on the iconography of 1968 in Polish posters and French affiches for Presentation House Gallery’s Countercultures Forum, organized by curators Helga Pakasaar and Jesse McKee. The conference is an eclectic ensemble of presentations by local writers, such as Michael Turner, and international speakers, like the sound-art Estonian punk-star KIWA. He looks just like the secret son of Julian Assange and David Bowie, and he blows my mind with his illustrated history of soviet underground music. Vancouver-based artist Isabelle Pauwels bring the day to a close with a rather uncanny reading. Her unimpressed detachment and wry humor echo some works in the gallery’s exhibition on the historic Vancouver collective the Mainstreeters; notably the unforgettable covers of a short-lived magazine from the early 1980s, aptly named L’Ennui.

The next day we’re visiting Isabelle in her flat in New Westminster, a historical city located outside of Vancouver. As we drive onto a street of suburban houses from the 1970s, Jesse’s riot grrrl compilation blasts emptyspaces:brokenplaces/letloose (fight song) by female punk rock band Red in Reverse, and it feels like we’re suddenly transported to the Pacific Northwest of the 1990s. Back to the city, it is time to see Tiziana La Melia’s exhibition “Innocence at Home” presented at CSA Space, where she painted over plates of metal shaped as birds and fish, backlit with hollow LEDs. Tiziana is definitely one of the most appealing young painters in Vancouver, and she shares a studio with Rebecca Brewer, with whom we discussed the feeling of guilt at being a female painter. Her roughly human-shaped cubist paintings on felt are admirable. We’re walking down Chinatown, the neighborhood that the hotel clerk recommended we not visit (pointing to a Starbucks on the map instead), and we’re with artist Ron Tran who is working on his upcoming exhibition at the non-profit space 221A, for which he will reinterpret merchandise from several stores in the neighborhood. In the courtyard of 221A, Ken Lum has installed a miniature Vancouver Special — the archetypal post-war Vancouver family home, with its faux brick and stucco — scaled relative to its 1970s property value. Heading further into East Van, we pass by Lum’s neon cross, entitled Monument for East Vancouver, that is mysteriously floating above the intersection of two roads in this traditionally working-class neighborhood. The work seems to echo the popular American “Jesus Saves” neon, except here it mimics a local gang tag and is filled with a Vancouver-specific mixture of sarcasm and local pride. An apocalyptic silver sunset greets us in the parking lot of Geoffrey Farmer’s studio. The magic man of “the couve” serves us tea and cakes and shares his enthusiasm about Merce Cunningham’s performance staged in 1972 at the Shiraz Festival of Arts in Iran. He talks about Los Angeles a lot, and I can’t stop thinking how opposite the two jewels of the west seem to me: sparkle vs. shadow; loud vs. hidden; gold vs. emerald.

Vancouver bids farewell with an unexpected parapraxis from a movie script: a lost car, a missed flight, a serendipitous re-direction to Kitsilano Beach and a dramatic sunset by the edge of the city of glass. I guess this is what happens when a place is too charming and a host too caring. Later that night we reverse the fortune, visiting Tamara Henderson and Julia Freyer’s joyfully messy studio, on the eve of their production for a collaborative exhibition at ICA Philadelphia. The journey ends a second time at the Pelican, a restaurant on East Hastings, a cult nightspot for northwestern night owls. It rains again. Run and catch your plane.