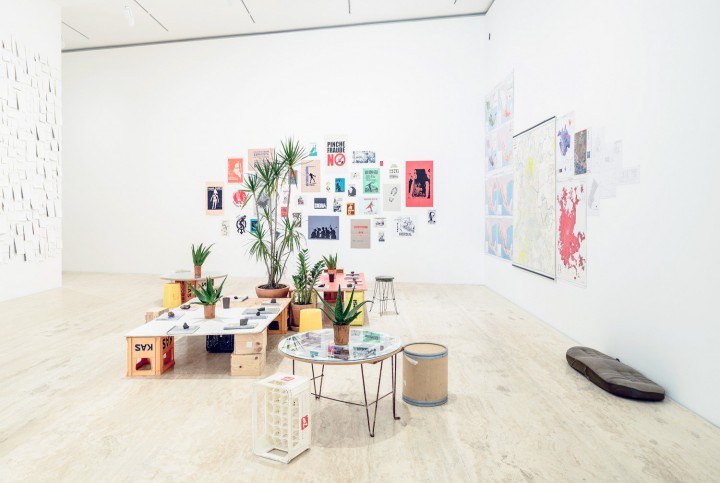 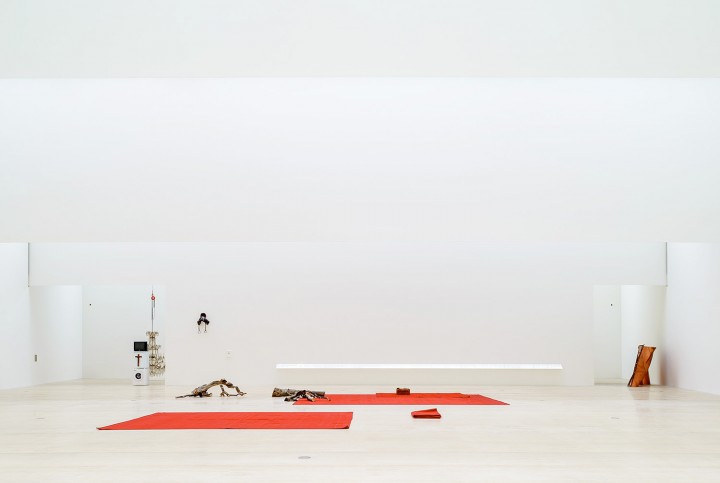 Based between Mexico and Berlin for almost ten years, Mariana Castillo Deball knows a lot about back and forth. It is an important concern in her work, the circulation of signs and meanings, this weird loop that makes history build itself constantly in the present and identities define themselves in reaction to fantasized others. In her show “Who will measure the space, who will tell me the time?” at MACO Oaxaca that opened late January, Castillo Deball goes one step further in her longtime interest in cultural bricolage, tribal appropriation, falsification of history, questions of authenticity and power as well as the performative aspect of identity. The new body of work produced for the show seeks to engage an ontological conversation with the specific nature of sacred objects in the pre-Hispanic era, notably the possibility of being “loaded” or “unloaded” through time by symbolic and phenomenological properties. The artist designed, with a local Coatlicue pottery workshop, a series of ceramic elements drawing from existing archeological figures mixed with more contemporary patterns like gears, nuts or toys. These elements are superposed in order to build columns, each functioning as a distinct narrative that attempts to answer two questions: “How do you tell the story of the universe in a hundred years? How do you tell the story of the universe in one day?” The results, typical of Castillo Deball’s work, play off of the anachronistic confusion created by the forms that compose it, wherein the language of visual art updates and challenges the idea of tradition that still presides over most craft productions. Castillo Deball continues to see contemporary art as an effective means of generating inclusive discussions about broader issues of representation and the actualization of the project of modernity, at a time when globalization seems almost fully achieved, and when local, tribal identities seem to fade ineluctably in front of the omnipresent figure of the Westernized global consumer. The main point of Castillo Deball’s installation, then, is to fight against the essentialization of identities, whether they be indigenous or anything else.

The city of Oaxaca could seem from outside like a multicultural paradise where American tourists, white Mexicans and idealized Indians and Mestizos live in harmony and prosperity. But Oaxaca is in fact one of the poorest states of Mexico; it struggles to adapt its traditional economy to current global demands. Tourism encourages the natives to perform their own culture as representatives of disappearing ethnicities, instead of embracing a more dynamic relationship to society that could save their traditions by updating their values and assets through active citizenship. This risk of thinking of identity as a fixed essence and not as a responsive construction gained an aching accuracy with the Paris attacks against Charlie Hebdo a few weeks ago, shifting our views about the “cultural” as a rallying, friendly concept to a divisive, destructive one. The Western world discovered, horrified, that some people were ready to kill for something they thought was futile: respect. Two characters were thus created: Charlie, the secular citizen educated enough to understand satire and humor in the mockery of institutions, morals and societies; and the radicalized Muslim, tragic symbol of the failure of the European integration model. Both were ready to be instrumentalized within larger political narratives.

It was in the light of these past events and reflections that I went to see Danh Vo’s and Abraham Cruzvillegas’s shows at the Museo Jumex just before leaving Mexico for Marseille (and back again, one more time). The two artists use their identities as strong referential elements in their artistic practices, although in very different ways. Abraham Cruzvillegas draws on a 1970s approach to identity politics — making room for representations of invisible phenomena or people within the field of contemporary art, hoping that this presence will trickle down from high art into more mainstream culture. Dahn Vo’s approach, I believe, is much more contemporary but echoes in a questionable way the tendency of the Western world to essentialize the identities I mentioned above. Indeed, since the beginning of his practice, the artist has devised an ambiguous persona that voluntarily invokes the victim status of a son of migrants, but also a rebellious one whose mission is to avenge its people through a Trojan horse tactic aiming to steal from the rich and give back to the poor, almost literally, in the field of representation. But can “the master’s tools dismantle the master’s house,” as Audre Lorde once relevantly asked? Herein lies the equivocalness of Dahn Vo’s proposal. In this regard, if Cruzvillegas’s show might seem a bit stripped of his formally generous essence in the severe although beautiful white cube gallery of the Museo Jumex, at least it succeeds at communicating in a honest way what’s at stake in the work and especially in the context of this specific museum in Mexico City.

I expect artists to challenge mainstream representations of power, not to validate them. I moved in 2012 to Mexico City because I wanted to know what it was to work and live in a different culture. I just felt there was a possibility for a forest of signs to exist there that would be so radically different from my own that it would change my vision of art forever — and it did. I’m still tremendously affected by the local: and I take the intensity of the successive culture shocks, sometimes back, sometimes forth, as a proof of the righteously changing nature of my own humanity.