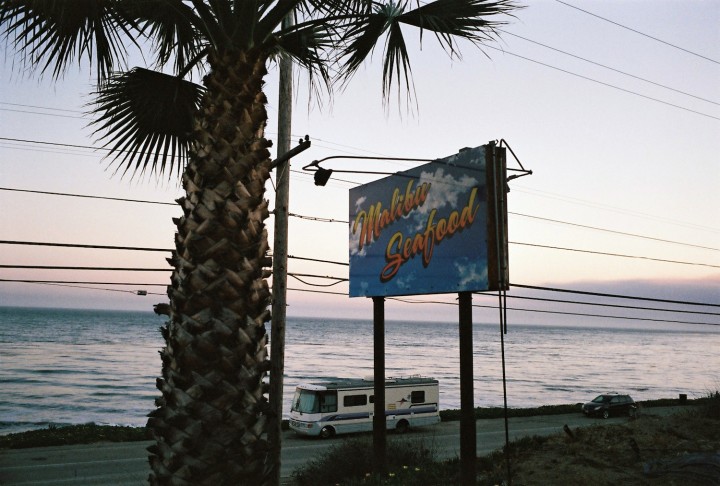 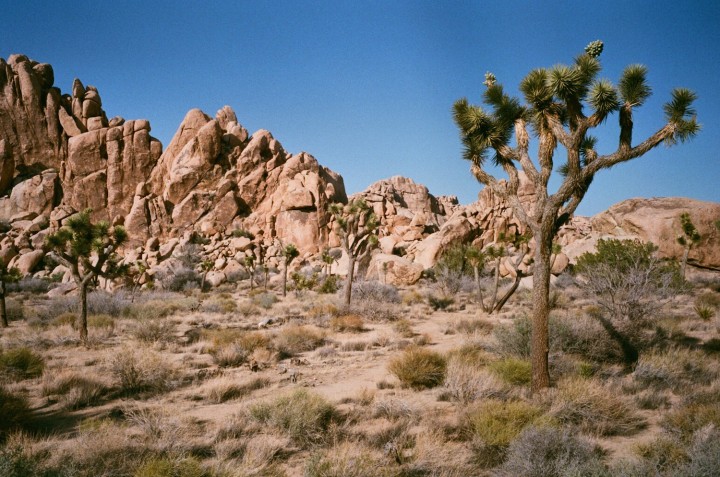 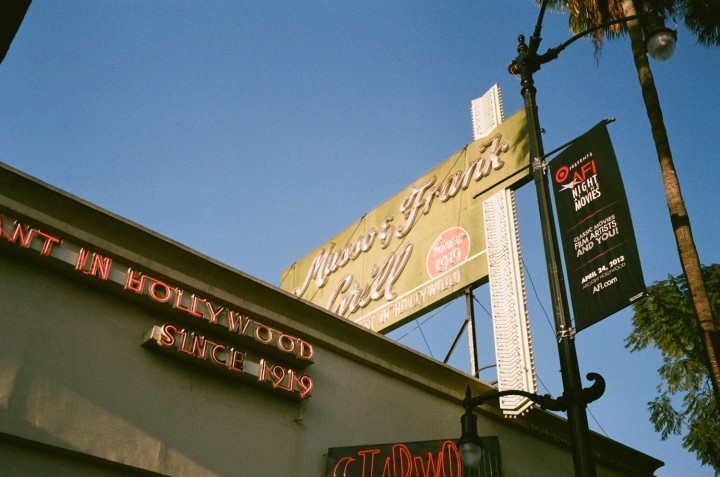 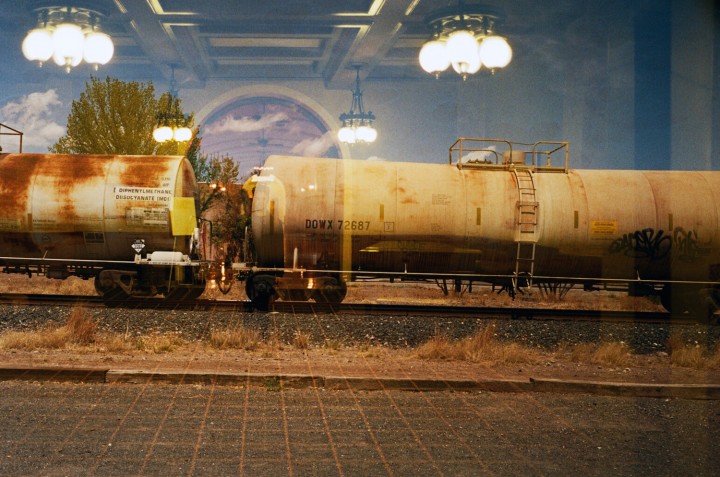 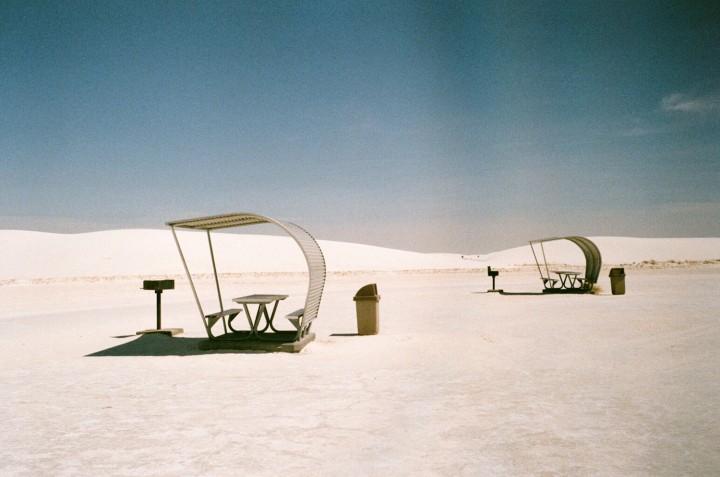 I land at LAX from Paris in a hazy mid-January 2014 afternoon with some summer clothes, many books on Los Angeles, a few vinyls, Flaubert, Polish poetry and my dad’s Leica. I haven’t slept; I’m haunted by the somber sparkle inside my mom’s eye at Roissy Airport as I was waving goodbye. I am here to start a new life with Fahrenheit, a 2,500-square-foot exhibition space and artist residency in the industrial part of downtown. I barely know the city, and still confuse the 101 Freeway with the 110 and the 10 when driving from Highland Park — where I settled down in a little house surrounded by Mexican families — to downtown, where Fahrenheit is opening its doors. Our neighbors from Night Gallery were the first audacious ladies to move to this area located at the intersection of Boyle Heights, Vernon and the Fashion District. Today galleries, spaces and artist studios are extensively developing in the neighborhood.

The paint is still wet and the Internet barely working when on January 30 we open Fahrenheit’s first exhibition, “Far and High,” presenting the works of Felix Gonzales-Torres, Laure Prouvost, David Douard and Tamara Henderson, among others. It’s the art fair weekend, thousands of visitors from out of town show up for the first edition of Paramount Ranch, and ultimately to our opening. The crowd is so thick and the tequila so tasty that two of my friends have to save me from passing out from emotion. Later we drive around town blasting the new Beyoncé and local DJs Nguzunguzu in a white convertible Volvo. Yes, Paris seems strangely far away.

Spring was never waiting for us, dear

Fahrenheit’s first artist-in-residence, Julien Prévieux, has arrived for a two-month stay to produce a performance starring local dancers and a musician. It is about time to make new friends. The Mountain School of Art students are spreading around town, and I decide to hit the road with one of them, French sculptor Caroline Mesquita. We drive through the dusty southwest, run on mesmerizing white sand dunes and observe triumphant yet lonely cactuses. We end up in Marfa, where I presented a film series at Fieldwork, and head back to LA blasting Dory Previn’s Hollywood-inspired depressing folk and admiring Frank Lloyd Wright’s angled buildings.

From May to July Fahrenheit devotes its program to performances, screenings and talks. Julien Prévieux’s dance piece gathers a large and very diverse audience. It also starts to get hotter and hotter, and my Polish blood demands a rest. I flee north to The Banff Centre, a charming retreat nestled in the Canadian Rockies, where the gallery’s curator whispers with a fashionably unimpressed smile: “Don’t worry, it will only take you about two years to get used to the West Coast.” When I return to LA, I learn that Fahrenheit’s benefit auction has raised enough to finance the entire upcoming program for the year. In June I fly to Europe and while sitting at a terrace in Berlin I overhear a young man chatting with his friend: “It seems like everyone is moving to LA! Have you checked this new space, Fahrenheit?” I smile to myself. I feel proud, I guess. Later this month, a glimpse of doubt darkens my Los Angeles blue sky — and what if I am not made for this Californian life, its individualistic culture and social isolation? What if my French-Polish soul will always win over my work ambitions?

Summer in the city

Fahrenheit’s second exhibition,“The Space Between Us,” opens mid-July and explores how the line extends beyond flatness into physical space through the construction of fluid and indefinite movement. It presents the work of Caroline Mesquita, Polish artist Piotr Łakomy and Los Angeles-based Aaron Garber-Maikovska. French writer and curator Dorothée Dupuis arrives in town for a two-month sojourn as a critic-in-residence and Fahrenheit helps her develop her blog Terremoto. That summer in LA, it seems like everyone I know comes to visit, and Fahrenheit does not even close for a holiday. Swiss curator Tenzing Barshee spends a few weeks here. He notes everything he experiences in his diary: our drives to Malibu blasting FKA Twigs’ Two Weeks, dancing to the purple moonlight and watching MacArthur Park melting in the dark. We take him to the legendary cocktail bar Musso & Frank, where I once interviewed Kenneth Anger and where the founders of Freedman Fitzpatrick and Château Shatto are waiting for us with some Europeans and locals. “I am standing in the sun,” sings French singer Amanda Lear. And what if LA’s fading golden light was in fact the ultimate backdrop for artistic encounters and interactions in 2014?

From freeways to highways, from east to west, through hills and canyons, I can’t stop driving. The epic iPod is blasting Randy Crawford’s Street Life, the song that is featured in Tarantino’s Jackie Brown and the 1984 Canadian documentary Hookers on Davie. It inspires Fahrenheit’s fall exhibition that features street films by two avant-garde filmmakers, Michel Auder and Józef Robakowski. I’m under the impression that the show is weirdly received, and I realize that LA, with its visual culture shaped by Hollywood and television, is a complex ground for the reception of avant-garde filmmaking. While shadows of doubt are breaking over my head, Andrew Berardini (whom I tease by calling him the voice of our generation) finds the exact words to appease my intellectual fears, and his ongoing support feels priceless.

October means FIAC time in Paris and the Marcel Duchamp Prize awards, for which Julien Prévieux has been preselected with the performance work we produced at Fahrenheit. Not one woman is nominated for the prize, so I decide to boycott the ceremony and stay in bed when I receive a text message from Elisabeth Forney, the impressive woman who is behind Fahrenheit and the FLAX Foundation: “C’est Julien.” He just won the Prize.

Back to LA,  artist-in-residence David Douard starts his large-scale production for an exhibition to open at the end of January 2015, with Liz Craft and Jesse Stecklow. Meanwhile it’s already Thanksgiving and Jesse McKee, the Canadian curator, is back in town. We hop into my car and drive straight to Death Valley. Ennio Morricone’s soundtrack for The Sicilian Clan plays full volume just as we enter Zabriskie Point, and I recall Thom Andersen’s beautiful documentary Los Angeles Plays Itself, which begins with the words: “This is the city: Los Angeles, California. They make movies here. I live here.”