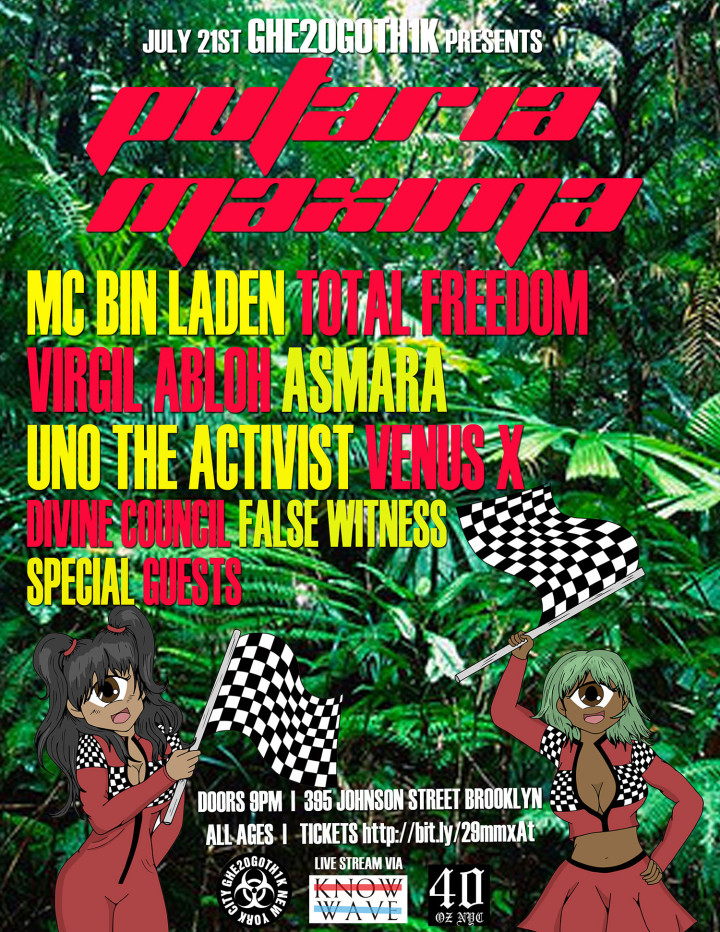 New York and its nightlife often exist in a state of “remember when?” In a city and scene that evolve so rapidly, you are perpetually wistful about the places and parties that vanish in an instant. Everything was better in the days of Max’s Kansas City, people will say, better in the days of Studio 54, of 1980s house music, or ’90s club kids. “Before, before, before”: before all the tourists, before Mayor Giuliani, before 9/11. There is always a past to mythologize and mourn, and good ol’ days to dream about. And yet, living here allows for moments so immediate, so thrilling, so “now,” when a scene that speaks to you crystallizes distinctly and uniquely, there is nothing but the present. GHE20GOTH1K, the roving party started by Venus X in 2009 — a year after I arrived in New York — is such an instance.

The party began as a reaction of sorts, a creation of DJ and native New Yorker Venus (born Jazmin Venus Soto to a Dominican mother and Ecuadorian father) during her own “remember when?” moment, disappointed by what she saw as the homogenization and gentrification of nightlife during the Bush era, when bottle service and Sex and the City club beats replaced the scrappier parties of the 1990s. “The gay parties are corny, and the straight parties have no gay people,” she told FADER in 2010 about the boring world against which she was fighting.

GHE20GOTH1K has regularly occupied grimy spots and warehouse spaces, its rotating band of guest DJs renowned for whipping up an array of sounds from its speakers, mixing up music both refreshingly obscure and willfully, winkingly obvious, including fast, robotic hardstyle, staccato reggaeton, chopped and screwed rap, queenly vogue, spooky blasted out bass, dreary goth, and overwrought remixes of diva hits. Venus says: “We wanted to have one place where you could be slowing shit down, mashing shit up that didn’t belong together and that was experimental.” It was the first party that felt urgently Internet-age, with DJs shifting between musical universes at the speed of a browser tab opening. “We’re in the Wild Wild West now for real, for real,” she told Interview about the web’s influence on culture in 2011. “People are creating hybrids out of everything — crossing over into places where they wouldn’t be able to go in real life.”

But even Venus, I imagine, couldn’t have guessed at what GHE20GOTH1K would become: more than merely a club, it is now a cultural phenomenon that has woven its way around the world, influencing art and fashion as well as the politics of identity. Venus, who classifies herself as much as an activist as a DJ, eventually teamed up with Shayne Oliver, the man behind fashion brand Hood By Air, and GHE20GOTH1K developed into a forum for our era’s grapple with gender and sexuality. The contextless music forged a blessed confusion of no rules for partygoers, who could feel comfortable showing up in whatever persona and pose they liked: men wearing crop tops and skirts, women’s hair died green, their lips painted blue. Any concept of “weird” disappears for one evening. As Venus recalled to Electronic Beats in 2015: “I was young, brown, growing up in New York and gay […] We kind of created a crossroads where everybody could meet up.”

There are prominent examples of GHE20GOTH1K’s influence on a generation of underground superstars. Beyond Oliver, musicians and DJs like Arca (who called it a “birthplace” in an interview in 2015) and Total Freedom came of age in the GHE20GOTH1K scene, and, by creating and spreading work patently influenced by the party, have helped solidify Venus’s signature preferences into something of its own musical genre with characteristic attributes—a “GHE20GOTH1K sound” that you will hear at clubs all over the planet: a dooming underbelly of beats, a penchant for campily manipulated vocals, a rapid shift between fast and slow rhythms. Her influence is also more broadly evident in the increasing tendency of high-fashion brands, such as Givenchy and Balenciaga, to aggressively blend streetwear with underground-punk style. But the party’s more spiritual reverberations are also everywhere: I hope it is not naive to say that we now live in a New York in which the individual expression of one’s identity is more of right and a mandate than it’s ever been, and I think Venus and her whirlwind of a party were early in understanding the hopeful mishmash that our culture would increasingly resemble. GHE20GOTH1K’s dance floor is a space so sexy, so strange and so thrilling, that it seems to exist as a hopeful prophecy of an ever-greater New York.

Having mostly concluded the party — though she launched a record label and clothing store this summer — Venus still surprises the city with unexpected pop-up events from time to time, as if she can’t fully let go of the memory, as though she gazes around at the GHE20GOTH1K-less New York, reminisces about the good ol’ days, and then decides to reinvigorate the scene one more time. But whatever the party’s final fate, GHE20GOTH1K’s reign was a sign of better times, perhaps even the best. So what’s up next?

Alex Frank is a writer living in New York.