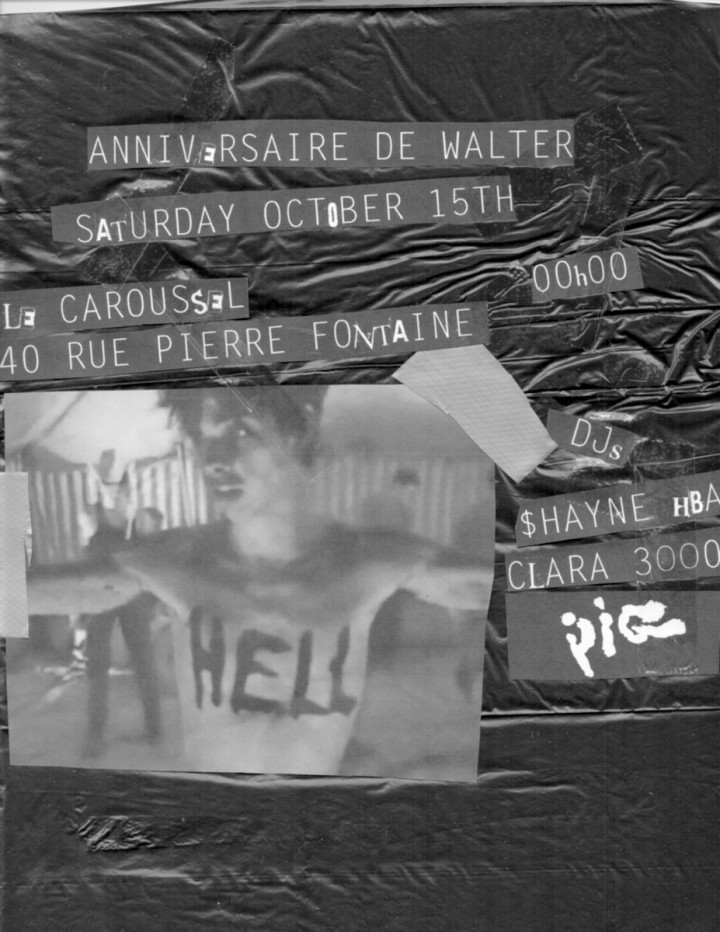 Électron libre is one of my favorite French expressions. In English it is sometimes translated as “free spirit,” though the French is more direct in its evocation. Clara Deshayes certainly belongs to the community of creative électron libres in Paris. Now the muse of designers Demna Gvasalia, Simon Porte Jacquemus, as well as photographer Pierre-Ange Carlotti, Deshayes quickly became Clara 3000, a mark of her futuristic ambitions.

We meet at the Café des Arts et Métiers, a busy bar located between the hectic Rue de Turbigo and Rue Réaumur, whose clients are a colorful mix of cool kids and tourists, and which serves “hipster” cocktails. Clara is running late, allowing me to fully acclimate to the environment with its repertoire of cigarette smoking, red wine drinking and darker clothing.

It’s love at first sight. Clara’s green eyes set within pale skin and her mixture of thrift-store finds and Vetements jeans render her a Parisian ideal from a bygone age, effortlessly stylish yet spontaneous. Her initial hesitance and shyness is extinguished by her first sip of beer and puff, after which she begins to tell her story.

Born in Versailles in 1989, she dropped out of school at seventeen to start an internship at Trax, the music magazine that introduced her to the nightlife of La Ville Lumière. Learning to DJ by observation, she came to know nearly everyone in the business. Leaving her first love, rock, for electronic music and techno, her new direction meant she initially oscillated between mainstream and periphery. Career highlights since include Pacha in Ibiza and Wilde Renate in Berlin. These days she regularly gigs at friends’ fashion shows, offering her license to experiment further.

Yet she remains shy, and I soon realize that Clara is an unconventional, even reluctant, member of the fashion fraternity. She admits to an affection for Le Pulp, a mythical Parisian nightclub from the late ’90s: “I admired their activist side, the intellectual and political energy Le Pulp was channeling, where there was no hierarchy at the door and anyone could get in. No red carpet or car service, Le Pulp was a community based on political and cultural beliefs.” Le Pulp closed its doors in 2007, coinciding with the election of Nicolas Sarkozy. To some extent, the soul of Paris nightlife followed with it. New and fancy nightclubs opened their doors, prescribing a dress code of “look rich or stop trying.” The price of drinks subsequently increased to between fifteen and twenty-five euros, with the result that young people began disappearing from view.

Clara has emerged out of this vacuum along with a new generation of Parisian creatives. More are visiting the city from abroad, and Clara has found friends in Gvasalia as well as stylist Lotta Volkova, who share her frustration at the increasingly elitist scene: “We started wondering who these people were and how we could relate to them. Then you get to the point where you just start doing things on your own; you just revolt against the system.”

On life since the November 2015 terrorist attacks, she reflects, “Parisians are now more independent, there is a new energy that comes from the shock of what happened, and oddly enough, it is the nightlife that is reacting in a very positive way, even though that was the target of the attacks. I am an independent spirit myself, and in this context I feel I have more freedom to do what I want and bring together my community around the music I play. Today this new group of kids gather around parties organized in more peripheral locations, out of the rejection of fancy clubs and bars (such as La Station and Champ Libre). There is a sexual and racial diversity in the community that we have never experienced before, and it’s nice to see all those people coming from different social backgrounds being part of the scene.” At my suggestion that we infer a kind of post-traumatic rebirth, she expands: “This scene also comes from a form of rejection. All those kids were sort of excluded by the scene for a long time; they were always there, they just did not have a place to go. Paris is a very romantic and sensitive city, people reacted in a spontaneous way, and instead of isolating themselves and becoming conservative they just fought back by sticking against racism and reactionaryism, opening themselves up to progress. They are still independent but not individualistic.”

When I ask Clara about what inspires her the most, she mentions the work of Harry Bertoia, the Italian-born American artist renowned for his modern furniture designs. She dreams of visiting the sites where Bertoia built his sound sculptures, such as Chicago and upstate New York. When I ask of her relationship to art, she responds: “I am interested in films. They inspire me, and I would love to work on a sound track. If an artist asks me to collaborate I would most likely say yes. Maybe I will make objects. Who knows? But for now a dream would be to make a sound track. Oh, and very soon I will be deejaying for free for a LGBT festival in Eastern Europe. I am so curious to go and visit.”

We share a cab to an art opening that we both happen to be attending, while discussing her upcoming trip to California as well as our unshakeable love of Paris. I recall a sentiment once told me by a friend comparing the city to a woman both beautiful and intelligent. I feel like Clara might be that woman.