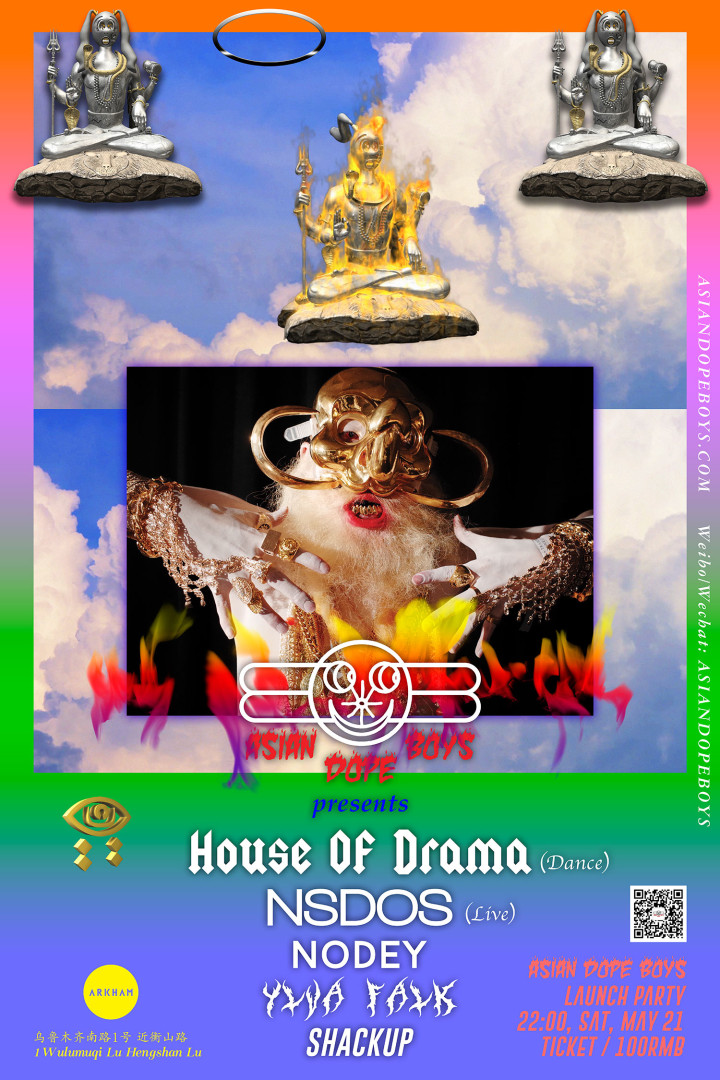 Sporting a gown adorned with images of Russian prison tattoos, slang words, a pair of large Japanese manga-style weeping eyes and two Chinese characters that read as lihai (swag), Chen Tianzhuo is the founder of the Asian Dope Boys. He tramps around in a pair of white Nike Air Force Ones and flashes a tattoo of a centipede with the words ksana (split second) and samudaya-vaya (birth and death) crawling up his spindly legs. He’s wearing ADB-branded earrings, one of the ways in which his crew identifies itself, as he strolls leisurely through the entrance to Modernsky Lab, a live house underground performance venue in Beijing’s SOLO Galaxy complex, and the location of an ADB event this past September. Two years ago he created the Asian Dope Boys label together with his collaborator Yu Han. Yet he doesn’t claim to be an artist; for him, “It’s a way to flee continuous work, because in the end artists are [stuck in] a cycle. ADB lets me put out there some of the things I’ve done that interest me. This perspective is very important to me: greater vitality emerges only when one isn’t held back by internalized rules.”

In June of this year ADB held events at Arkham in Shanghai and Lantern in Beijing, after-parties for Chen’s solo exhibitions “Trayastrimsa” at K11, Shanghai, and “Ishvara” at Long March Space, Beijing. The overlap of gallery and club culture — one example being Chen’s 2013 solo exhibition “Tianzhuo Acid Club” at Star Gallery, Beijing — is an increasingly prominent phenomenon in China’s cultural landscape. It forces us to reconsider the boundaries between the white cube and the dance floor, the identities of gallerygoers and clubbers. In a country without a real clubbing culture, many alternative spaces have brought about this form of boundary busting.

On-stage performances have grown in importance to Chen this past year. It is not simply his natural flare for visual statements; he has also become committed to music and performance art. It was after seeing Chen’s performance at the Palais de Tokyo, in June 2015, that musicians Aïsha Devi and Nodey both got in touch with him about a possible collaboration. But, according to Chen, “I pick the people who give me goose bumps, who are just diving deep into their music. I always hope I can find what’s new and attractive. Of course, mine are not the usual choices. They’re the needles in the haystack.”

When discussing how ADB might be understood, Chen says: “Fun, young sprit, surprise and wildness. These are fundamental to attracting people to notice the label. The way I define a party is trying to bring alternative and underground music and artists from outside China to the attention of people inside China, and to provide different kinds of perspective. For example, the event we did with the Israeli group Karma She last October was intended to showcase Tel Aviv’s underground culture and music. It’s quite avant-garde, actually. I want to give people an abundance of different experiences, the experience of cross-cultural geography, which is new and fresh. When we talk about ‘young,’ it’s not just street culture, skateboarding, rap and marijuana. I hope to bring to the young people of China what’s really new. And I also would like to generate curiosity about the new stuff.”

It is Chen’s fusion of visual, musical and performative practices that makes ADB so prolific. It is also through their half-visual, half-performative structure that ADB cultivates crossovers between the realms of gallery and club. People who attend expect variety, not merely a traditional clubbing experience: a wildly divergent underground culture with dazzling fashion, pulse-pounding music and impossible-to-predict live performances. ADB offers a choice beyond the conventional array of experiences.

By 8:00 PM, people are already lining up outside Modernsky Lab. ADB’s recognizable red flag, bearing a burning anus-face with flaming characters, like something from Naraka, the Buddhist version of Hell, marks the entrance. The demonically devout clubbers are ready to die in the service of an epic experience — appropriate given the evening’s “mortuary” theme.

One rarely encounters people in casual clothing at ADB’s events. Everyone is dressed as though attending a creepy fashion show. Chen’s collaborators are all unique: from Beio and House of Drama to China Yu; from Justin Shoulder to Karma She. They all share Chen’s openness to visual communication. The events attract a never-ending stream of new faces, comprising the established clubbing fraternity, the “zeitgeisters” of every 798 Art Zone opening, as well as the celebrities of the creative industry. ADB supplies a broad offering of music, art and fashion to this public. One attendee admitted to me that “this is the only party in Beijing and Shanghai I always bother getting dressed up for.” Another acknowledged that “the party’s at the sharp end of fashion; the ground’s practically dripping with hormones.” People grasp ADB’s status as a forward-thinking fashion brand, yet it is a grotesquely vulgar kind of fashion, whose mold-breaking ethos is echoed in the ensuing frenzy of narcotic-induced self-examination, self-rescue and self-redemption.

After 10:00 PM the performances get underway in Modernsky Lab’s two spaces, one big, one small. The cast comprises local musicians Vagus Nerve, DJ Shackup and Zhiqi, as well as global talents Aïsha Devi, Love Cult and Justin Shoulder. The musical genres represented vary wildly, with the lineup lacking ostensible logic beyond that dictated by spatial confines, with DJ Shackup spinning party beats in the smaller space and Vagus Nerve offering noise music in the other. People are flying through this universe on a wave of noise rock, space rock, bass, wave trap, obsessive techno, spiritual vocal and metaphysical intercultural dance beats — to the point where one might start to feel like Beio, Chen’s muse as well as one of his preferred performers, who suddenly starts to Butoh dance among the crowd.

“At ADB’s parties, all you can see is the stage and yourself,” says an attendant. “And up on stage, there’s always something unexpected happening.” For example, during ADB’s June party at Arkham in Shanghai, House of Drama and Beio started to lose their minds by the DJ deck, as if they were continuing their performance at K11 — only this performance wasn’t prearranged. Their loss of control was a pleasant surprise, such that even Chen joined in their spontaneous dance. From there they went right up on stage, bringing the ambience in the room to a boil. With the DJs and performers losing themselves to the party, the audience couldn’t do anything but follow suit.

Perhaps this scenario reflects Chen’s Buddhist belief that the ADB club experience parallels a frenetically joyful sacred ceremony. Artist and frequent collaborator Aïsha Devi, of simultaneously Swiss, Nepalese and Tibetan stock, mixes clean vocals with heart-thumping bass, her high-pitched trills piercing the ears. Devi speaks or sings herself into a meditative state, a peaceful incantation. By contrast, Justin Shoulder’s Carrion, also performed at the party, suggests the embodiment of a posthuman clown. Clad in a transparent-plastic prosthesis, his bones worn on the outside, his mechanized face with wide-open red irises is framed by sprouting locks of electrical cables. In the misty climes of Modernsky Lab, Carrion resembles an enormous larva that has crawled out of a tropical rainforest. Shoulder, a Sydney-based performer, uses ancient myths as a blueprint for constructing queered ancestral mythologies in his ongoing “Fantastic Creatures Family” project. Through handmade costumes and prosthetic limbs, he gives each personification its own unique body language, granted the breath of life by the context in question, be it a club, a gallery or elsewhere.

This cast of characters epitomizes ADB’s events. These monstrous spectacles and Beijing bacchanalias provide an escape valve for Chinese audiences. Like all great events, they corrupt and seduce, offering up souls for sacrifice.

Milia Xin Bi is an independent curator living in Beijing. Her writing appeared on Leap and The Art Newspaper.