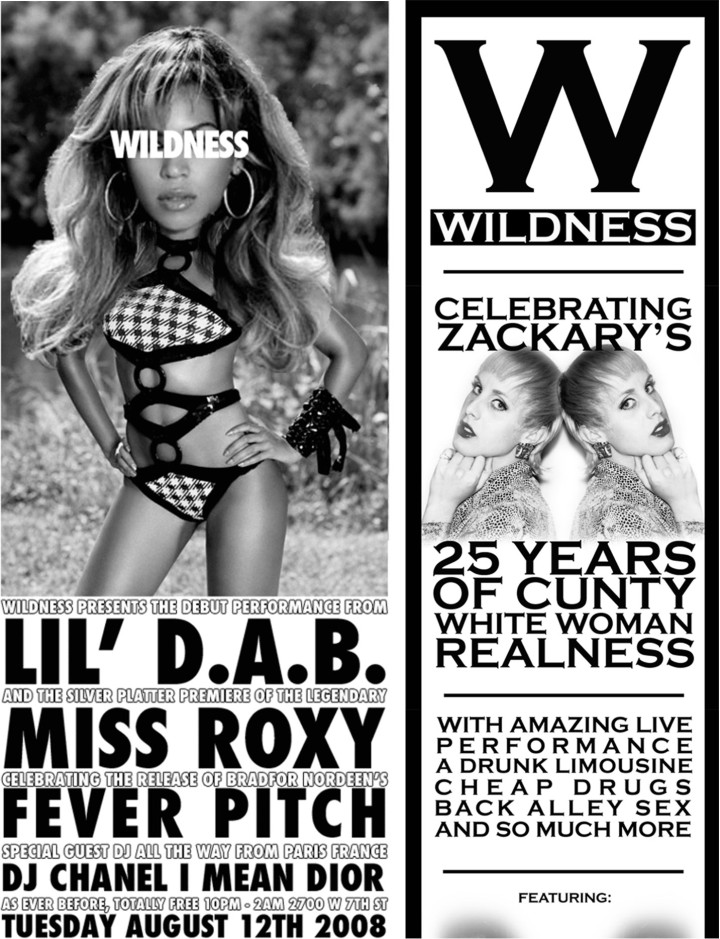 What is Wildness? Literally, it is the state of being wild, undomesticated, untamed, as with animals or plants found in the state of nature. In the world of contemporary culture, it also happens to be the title of a 2012 feature-length film directed by artist Wu Tsang, which documents and dramatizes a party of the same name that was hosted by DJs Ashland Mines (Total Freedom), Daniel Pineda and Asma Maroof (who together form NGUZUNGUZU), and Tsang in Los Angeles from 2008 to 2010. They had each arrived in Los Angeles in recent years, but it was not until Tsang began the MFA program at UCLA in 2007 and moved to the neighborhood of MacArthur Park that they all paid a visit to the nearby Silver Platter. Mines and Pineda had been looking for a place that could host a party night, and Tsang in particular was struck by the bar’s Friday-night drag performances, which drew a sizeable group of transgender women. Thus was born Wildness, a club and a performance night, which for two years, every Tuesday, sought to produce what its website at one time described as “new ways of visualizing, physically experiencing, and talking about complex identity politics that surround our queer lived experience through late-night artmaking and party having.”

It was not of course the first instance of the intersection of art and nightlife. Perhaps the best-known examples are those from New York in the 1960s-80s: Andy Warhol’s Exploding Plastic Inevitable; Club 57 hosted by the performance artist Ann Magnuson; Keith Haring curating shows or giving readings at the Mudd Club; or Dara Birnbaum and Gretchen Bender showing video pieces at the Mudd or the Danceteria. The experimental nature and portability of performance had long made the genre especially amenable to presentation at nightclubs. To take just the example of LA, performers such as Johanna Went were regulars at Al’s Bar, Club Lingerie or the Hong Kong Café beginning in the late ’70s; Ron Athey performed at the fetish-oriented Club Fuck! from 1989 to 1993; and Vaginal Davis hosted her Club Sucker nights at the Garage. But wherever they were located, these parties generally catered to specific musical audiences, whether house, goth or punk.

Wildness was different. One might say that it sought to embody difference itself. It distinguished itself as an event organized by self-avowed queer people of color to serve an inclusive community. Its home at the Silver Platter, a bar that had been in operation since 1963, with a primarily working-class gay and trans Latino clientele, only reinforced this identity. This meant that club kids were rubbing shoulders not only with the artists who showed up for Wildness, but also with the bar’s existing community of trans women and friends, who as often as not were immigrants from Mexico and Central America. In acknowledgment of this community, Tsang, together with artists Nicolau Vergueiro, Michelle Dizon and Camilo Ontiveros, set up a community center in 2009 in a space around the corner from the bar. Imprenta, as it was called, offered HIV testing as well as a transgender law project, where trans, intersex and gender nonconforming people could receive legal assistance from law students and specialists from local law schools. Imprenta also hosted the occasional exhibition, including the “What’s on the Page?” group show, and solo projects by RJ Messineo and Alexandro Segade, fellow queer artists from UCLA.

Just as important as the party’s program, however, was its relatively small, intimate scale. The venue was modest in size, with a bar running along one side, and a checkerboard floor leading to a small stage area that made for dancing in a cozy setting. A typical evening would begin around 10 PM, with Tsang frequently behind the bar serving drinks, and Mines, Pineda and Maroof at the turntables or doing lights. The event was completely DIY, and even the bouncer was friendly. It was that kind of place. Such an atmosphere allowed for a feel of spontaneous conviviality to be shared among the party’s guests, and there was more than one birthday celebrated at the bar, often with cake and candles. At times there were even snacks — pizza, tacos, whatever — for hungry clubgoers.

This feel of informality also served as Wildness’s musical signature. Mines, Pineda and Maroof introduced an immediately distinct kind of beat to the mix of EDM, rhythm and blues, and hip-hop by drawing on cumbia, cumbia sonidera and trival guarechero. The effect made for some fresh-sounding mixes, with Nicki Minaj, Beyoncé and R. Kelly — this was 2008 after all — segueing seamlessly into sounds from Mexico, Colombia and other parts of the world. The three were supplemented by friends — either other local DJs and musicians or ones passing through town, such as DJ /rupture (Jace Clayton), Lengua (Eamon Ore-Giron), Kingdom (Ezra Rubin), Chelsea Starr, Milan Christopher and Caribbean Dandy from Tokyo. Wildness’s hard-to-place mix of dance music and the occasional pop hit, set to an undercurrent of cumbia and other beats less common in US nightclubs, made dancing there feel different.

This sense of openness also extended to the special guests who would frequently perform at Wildness. These included Tsang’s circle of queer and trans friends, Athey and Juliana Snapper, Zackary Drucker, Flawless Sabrina, Nao Bustamante, and Malik Gaines, Jade Gordon and Alexandro Segade of My Barbarian among them. But the stage was open to a range of LA-based artists, such as CamLab (a collaboration between Jemima Wyman and Anna Mayer) and Todd Gray, Brendan Fowler, Lucky Dragons, Hans Kuzmich, Dynasty Handbag, Sister Mantos, Butchlalis de Panochtitlan (Raquel Gutiérrez and Claudia Rodriguez), choreographers Ryan Heffington and Nina McNeely, musicians such as Glasser or Geneva Jacuzzi, the experimental chamber music ensemble LA Fog, drag performers Miss Barbie-Q and Tammie Brown, burlesque dancer and actress Malaika Millions, and Lady Ariel Prodigy: a mix of lesbian, trans, queer and friendly straight allies. It also featured acts passing through town, including Ryan Trecartin and Veronica Gelbaum, Big Art Party and Farrad, Penny Arcade, Shunda K (of the lesbian hip-hop group Yo Majesty), JD Samson and the band Men, Fine Art Union (Annette Stav Johanssen and Synnøve G. Wetten) and Agassi F. Bangura. This sample of national and international names suggests the long range of the spell cast by Wildness, not merely on its performers but its visitors as well. The nights were uniquely heterogeneous events, intensely local in their focus, yet global and cosmopolitan in their reach.

In making the eponymous film, Tsang has not only narrated the history of the party, but also spread awareness of it even further. In the years since Wildness, Tsang has made other work in which nightlife serves as a space of experimentation, including A Day in the Life of Bliss (2014), a video installation in collaboration with performance artist boychild. And Wildness’s unorthodox take on clubbing has gone on to inspire other, more recent, club parties, including GHE20G0TH1K in New York (where, not coincidentally, Mines, Pineda and Maroof also sometimes mix), as well as queer theorists such as José Esteban Muñoz and Jack Halberstam, who have used wildness as a generative concept in thinking about queer and intersectional politics. [Halberstam discusses this in her essay, “Wildness, Loss, Death,” Social Text, vol. 32 no. 4, Winter 2014, pp. 137-148.] But even as the party’s organizers continue to be generative for the nexus of art and club culture, Wildness itself feels somehow irretrievably distant. Begun when Obama was still campaigning as the presidential candidate of change, and at a moment when Facebook, Snapchat and other forms of social media had not yet become ubiquitous (invites were actually posted on Myspace!), Wildness, with its goal of inclusivity and openness, of “dialogue between communities,” can appear unbelievably optimistic. Indeed, from the vantage of 2016, when, despite the efforts of the Black Lives Matter movement, racism continues to be as intractable a problem as ever, and community activist groups in LA have staged protests against art and performance spaces as gentrifying forces affiliated with real estate speculation, Wildness can seem like another world, an untamed one of possibilities. Eight years may only be half a generation’s span, but in club years, it feels a lifetime away.

John Tain is a curator for modern and contemporary collections at the Getty Research Institute, Los Angeles. He’s also on the programming committee at Human Resources.