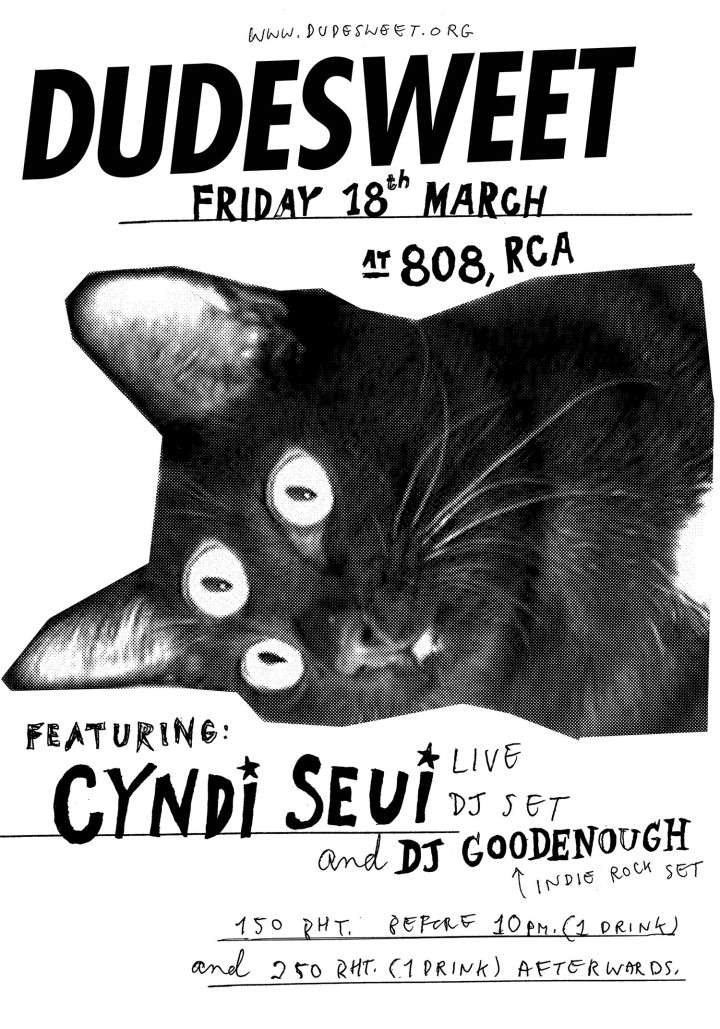 Dudesweet’s founder and creative director told a landlord that he wished to use a small restaurant on Bangkok’s infamous, tourist-infested Khoasan Road as a venue for a simple, quiet school reunion in 2002. It was, in fact, the first ever Dudesweet party, and the beginning of the first and the longest-standing Bangkok club night.

Founded on Pongsuang’s disillusionment with mainstream music being played in clubs and bars, the first party aimed to carve out a haven for indie rock/punk/alternative rock aficionados who found it taxing to groove along to popular hip-hop and house music of that period.

From an underground party attended by a few dozen people, Dudesweet has branched out beyond its original naive purpose of playing personal music choices and displaying friends’ artworks. Led by Pongsuang, Dudesweet is a creative collective with core and revolving members as well as affiliates from creative industries.

As an unofficial, intangible creative landmark, Dudesweet has grown into, at various points in time, a massive club night, an art curator, an artist, a concert organizer, an alternative media, and so on. Over the years, Dudesweet has worked with numerous products that wish to incorporate art-inspired, out-of-kilter ideas, collaborated with major local fashion designers, started the Art Fund Forward Award with the Museum of Contemporary Art Bangkok and played an integral part in building the local and regional music scenes.

The proudest accomplishment, however, derives from providing a breeding ground and gathering point for emerging as well as established artists, musicians, designers, writers and other individuals working in Thai creative industries: “We like to think that a lot of artistic, professional collaborations stem from our parties,” said Pongsuang.

With wonderfully weird main members and well-known rotating affiliates, the collective might have shifted in shape and form over fourteen years, but it has never lost its rebellious spirit, relentless creative drive and coherent musical and visual identity. As much as he hates to accept the laurel bestowed upon him, Pongsuang is a highly regarded creative director, cartoonist and graphic designer whose unique styles swivel from brash, in-your-face humor and punk rock attitude to melancholic self-examination. This year’s Silpakorn University Designer of the Year Award recipient, celebrated illustrator Terawat Teankaprasith, has remarked that, “You can see a lot of Dudesweet’s traces on many design works in Thailand today […]. I am not a partying kind, but I can guarantee that Dudesweet is not just about getting drunk or loud music, it’s a cultural movement on its own.”

Always combining art, design and fashion with music, Dudesweet has curated art exhibitions for young artists. When he feels like it, Pongsuang also exhibits his own works, which usually get snapped up within hours. Under the Dudesweet umbrella, artist duo Elmgreen & Dragset erected their installation Dislocated Oriental (2008) at Bangkok’s Central Station. Replicating the exact corridor of Bangkok’s most expensive hotel, The Mandarin Oriental, in one of the city’s most congested stations, serving people from all walks of life, provided a startling inverted perspective.

According to Michael Elmgreen: “[Dudesweet] drags in a different audience than the normal art crowd. The art scene in Bangkok isn’t so big, so it is refreshing that there are some alternatives to the established system,” he added. MOCA Bangkok’s director Boonyapha Bencharongkul also echoes this sentiment: “I don’t believe in putting art on a pedestal or glorifying artworks. I believe in the integrity of the art world and modern lifestyle. As far as it goes, Dudesweet is at the forefront of integrating art and parties.”

Music plays a major role in the making of Dudesweet. In the “age of musical plenty” (to borrow an expression from music critic Ben Ratliff), Dudesweet is fiercely adamant about protecting its musical integrity. No matter how popular a certain genre is at the moment, Dudesweet keeps its rock and indie spirit. Indeed, nothing can persuade the collective to play music that they do not like.

“Dudesweet gave us our first few breaks,” said Thitiphan Anawatchapong, the drummer of indie rock band Slur. “If you look through their roster, you won’t believe how many bands they have given an opportunity in front of a crowd. So, it’s not a surprise that you see a lot of musicians at Dudesweet parties. We love the people behind it as well. The weird yet admirable thing is they never speculate how much this band or that band will bring people in. They just book artists that they like. It’s really good for our music scene. Sometimes, I wonder if they ever make any money from anything they do!”

It would be wrong to say that Dudesweet still attracts the same numbers to their parties. With the changing generations, its musical trends and sometimes indecipherable aesthetic, Dudesweet fully understands its dwindling popularity, but they are still uncompromising when it comes to delivering their vision and standing by their principals.

Of late, Dudesweet has begun to employ smaller venues, infusing them with mini art exhibitions including new and emerging artists. To them, this is a period of rebirth. The latest bright young thing is Panlert Srisoi, whose artworks touch on shallowness, inertia and postmodern disconnection by means of acrylic and spray paint. Dudesweet recently worked with Tiger Beer’s Tiger Jam project, serving as one of the four chosen artists, building a “slum” with real-life characters breastfeeding, and providing a motorcycle taxi service and gambling in the middle of a hipster concert (Pongsuang posed as a sleeping security guard). For the next party in the program, which is dubbed “1999 Yearbook,” 1990s music will take over three floors of a charmingly run-down club. For its installation, Dudesweet is calling on red-hot publishing house Salmon to live produce a “fanzine” on the premises. Salmon’s editorial team will work with the Dudesweet team at the party, and will deliver said fanzine at the end of the night. Both teams are restricted to using techniques and visual aesthetics of the ’90s. All smartphones and digital cameras will be banned from the venue. “They also can’t wear big-eyes,” said Pongsuang.

This year, Dudesweet has also launched a full-fledged online magazine, titled Third World. Its literary, satirical tone, socially reflective nature, imaginative characters and mischievous artworks have proven an instant hit with the Internet generation, some of whom probably haven’t heard of Dudesweet parties.

“We’re rebuilding. We don’t mind going back to being an eighty-person party. We know what we can do best, and we’ll stick to that,” said Pongsuang. That’s no lie.