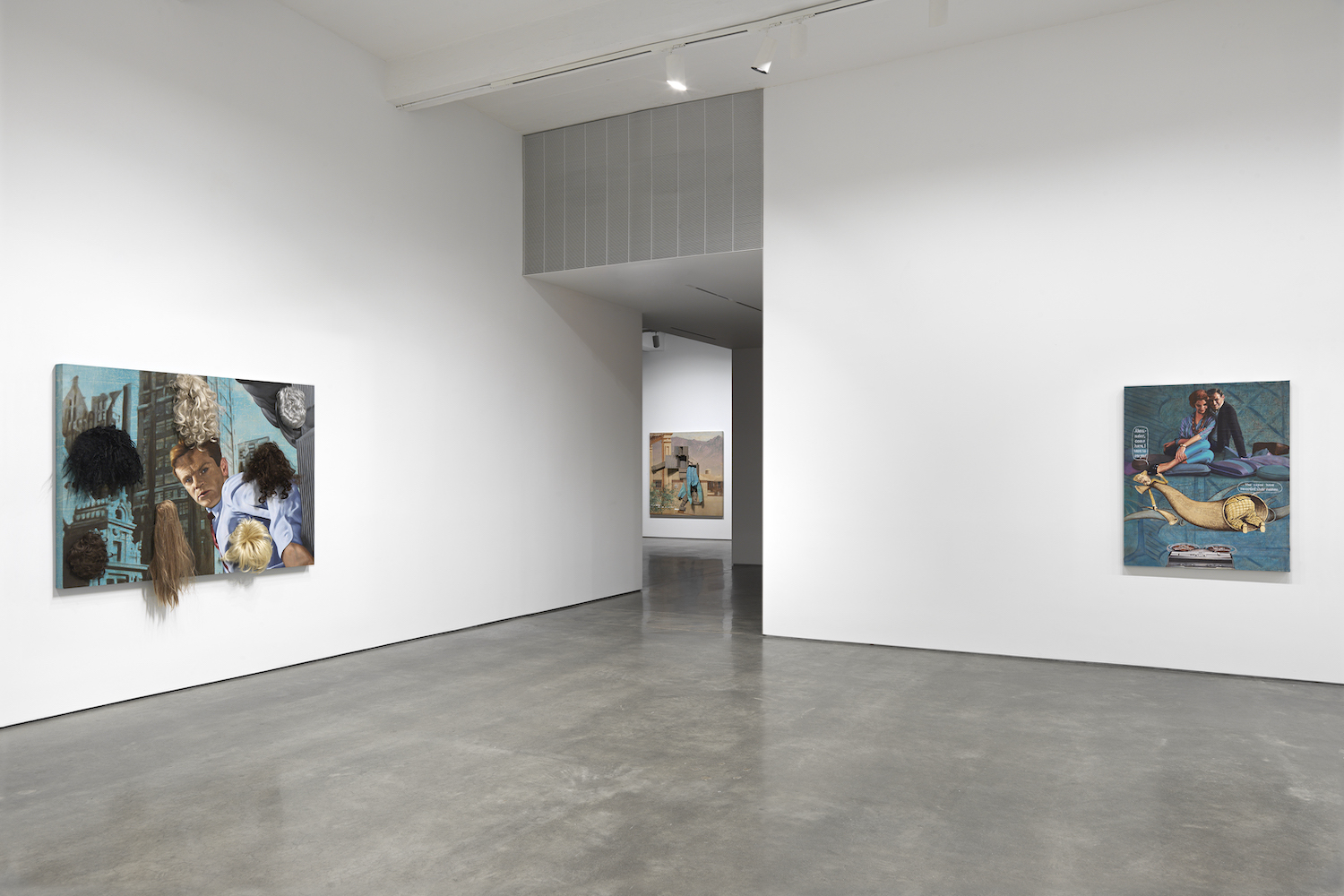 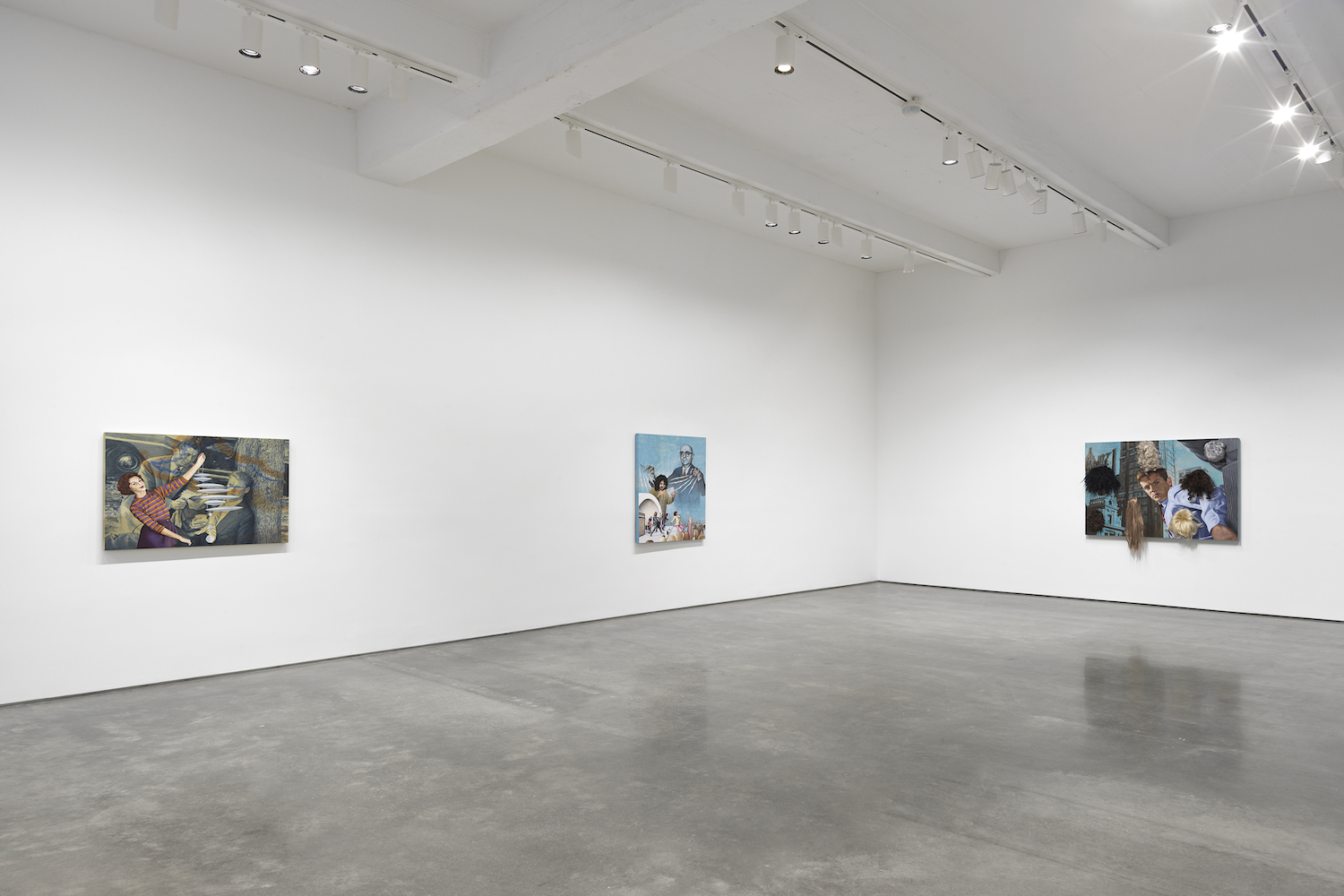 Now that Jim Shaw believes he’s washed his toxic obsession with Donald Trump out his system (see last year’s show at Simon Lee gallery in London, “Hope Against Hope”), his new exhibition at Metro Pictures, New York, marks a return to his leitmotiv of exposing the world’s unconscious forces at play. Titled “Before and After Math,” the show offers eight paintings – all named after the titles of songs that made him cry – and four videos. I had the pleasure of asking the artist a few questions about his fascination with mass manipulation.

Alexandre Stipanovich: Let’s talk about your ongoing show at Metro Pictures. It’s titled “Before and After Math.” Is it a minimal show for you?
Jim Shaw: Pretty much. I basically produced the bulk of it this year and without any assistance. One of the pieces, instead of being traced, it was screen-printed. There was an eighth painting that was done last year, the one with John Sinclair and Theodor Adorno and the MC5 (Alt Right Myths #3, Frankfurt Schoolhouse Rocks!, 2020). But everything else was painted since December. The painting with the bread took me most of December to paint.

AS: I see.
JS: Normally I’m a fast worker. But also, as I did it all myself, it also causes a great deal of pain because I’m old. 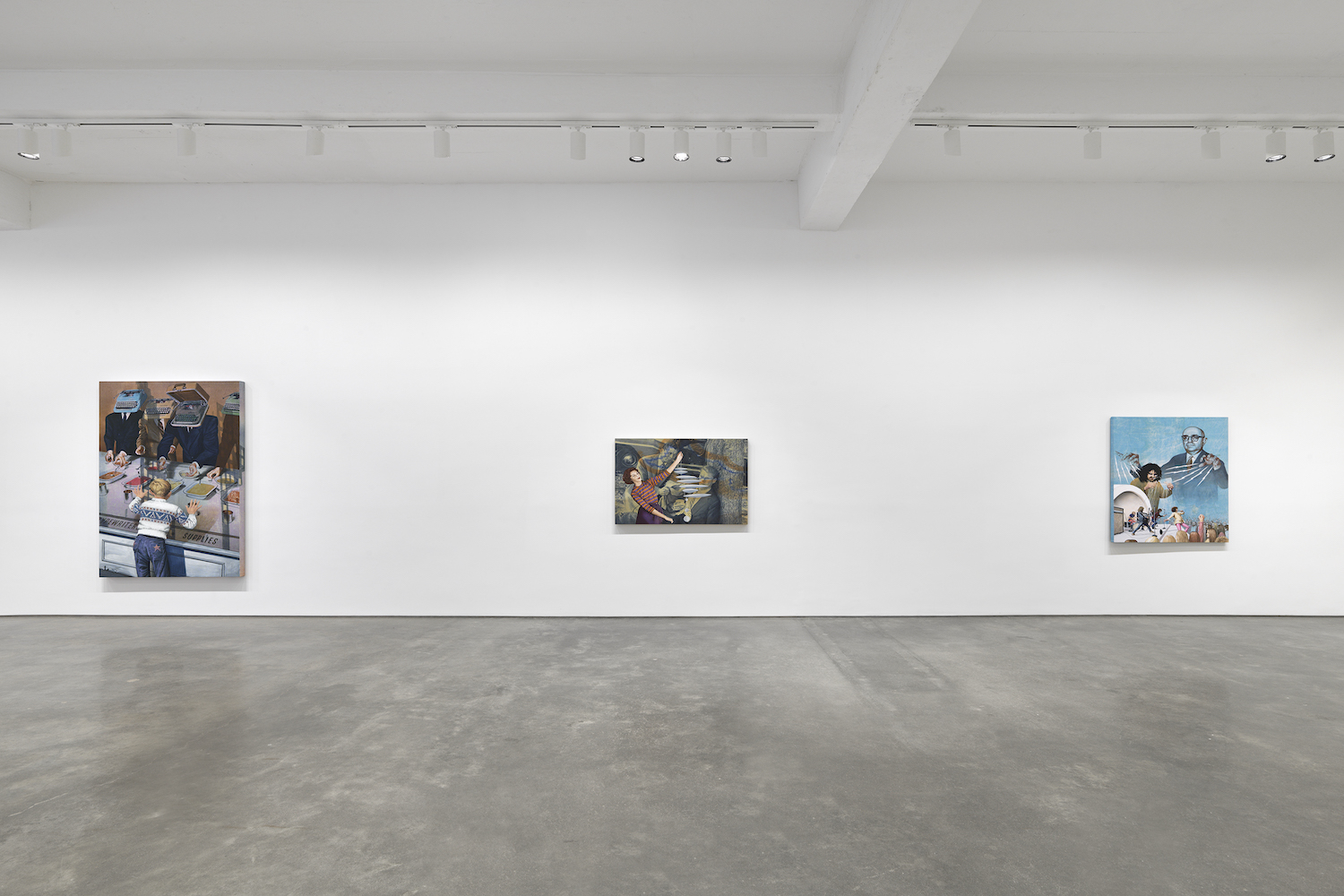 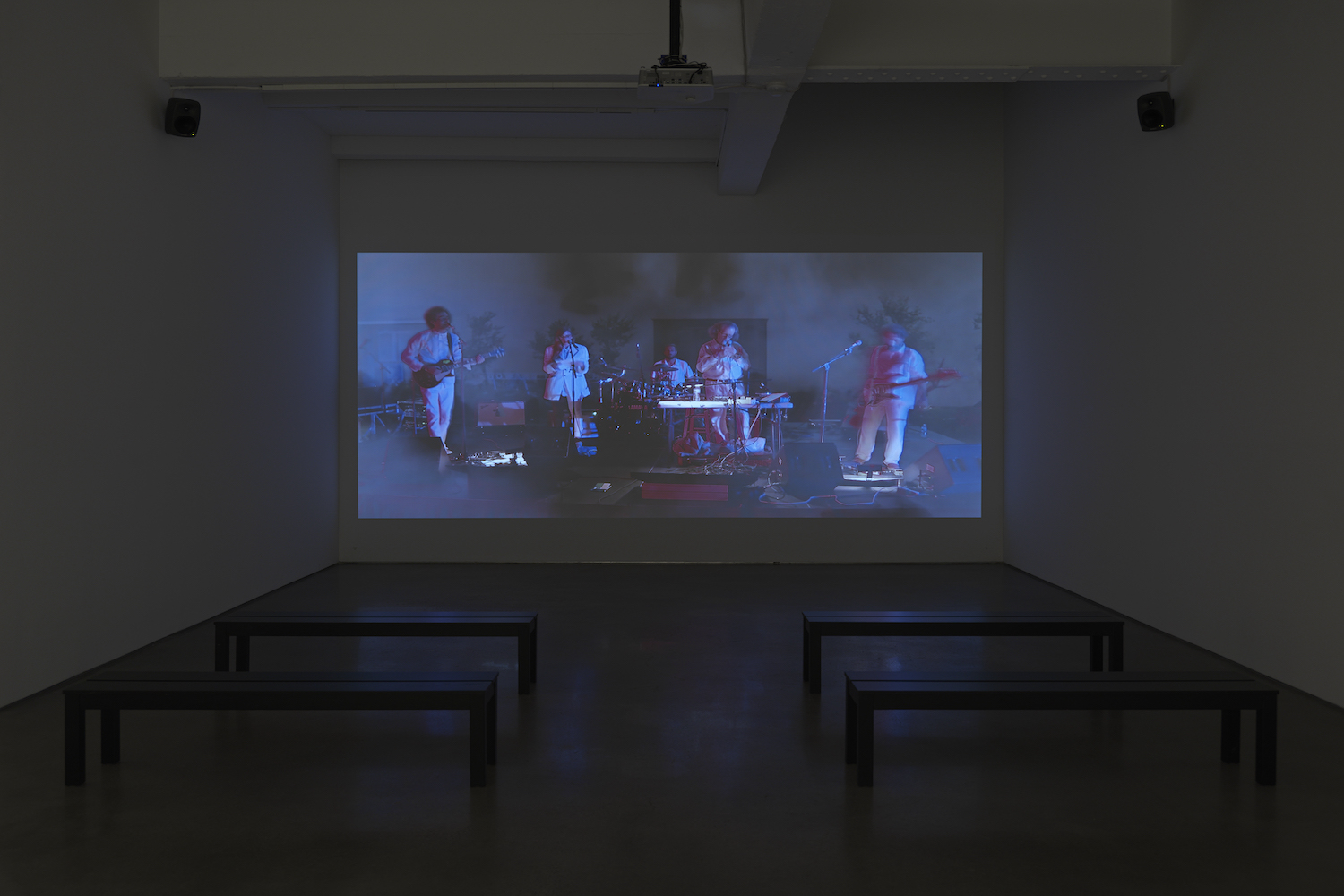 AS: Let’s talk about this painting The Bridge (2020). You changed the original image of Margaret Bourke-White’s famous depression-era photo, World’s Highest Standard of Living (1937), in two ways. You changed the people waiting in line into bread loaves, and the mural above, originally showing a white nuclear family, into a different group in a car.
JS: The phrase that we used in America for that waiting line is a breadline. So, it’s a visual version of that. It’s a flat sort of pun, basically. But the other pun is that this image of the two I Love Lucy couples crossing the Golden Gate Bridge was essentially the same grouping — except there’s no children in it — that occurs in the photograph of the breadline. I was working with those aspects. Sometimes when an image hits your brain you just have to go with it.

AS: Right.
JS: I wish the breadline was all sliced bread, but, god, that would have taken me a month and a half to paint. The baguettes were much easier to paint, but baguettes are not very American. Sliced bread is.

AS: There is another painting with a direct reference, which is It’s For You (2020), referring to the movie Fourteen Hours, the Henry Hathaway film, from 1951, about a man threatening to jump off the fifteenth floor of a hotel in Manhattan.
JS: It was an evolution. I had done this painting of the starlet version of Lucille Ball, except that her face was missing, and it was like a window into this other image that was the original backdrop that I was painting on, of a topless dancer from the ’30s or ’40s. The only thing that defined Lucille Ball’s face was a lot of jewels. I wanted to do a similar sort of painting where I would leave an empty space that would be a man on a ledge, either trying to escape or jump, depending.
So, I was looking at that movie, Fourteen Hours, to find if they had that image. I didn’t find that image, but I got kind of taken with the ambisexual neurotic that Richard Basehart played several times in his younger days. I think maybe because his forehead was bisected in a weird way so that when he furrowed it, it was irregular. Because it seems like he was not a neurotic individual in reality, just a well-adjusted actor. But he was cast as that many times. So, that, and I had wanted to do a painting in which the foreground layer was a bunch of wigs. So, I put it together. I had decided somewhere along the way to name most of the paintings after songs that made me cry, and It’s For You is a Lennon/McCartney song that is about someone who’s told that they don’t deserve love. 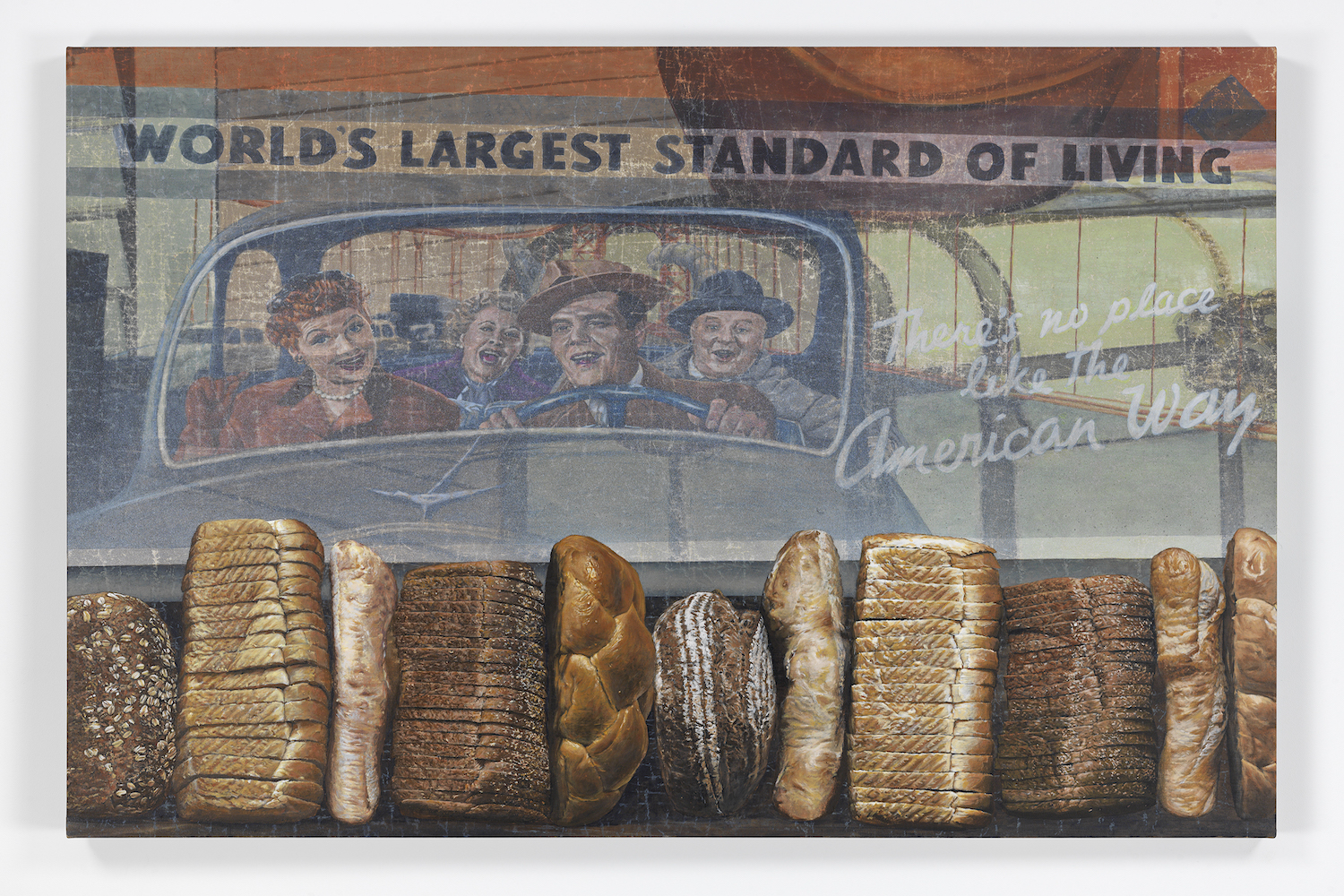 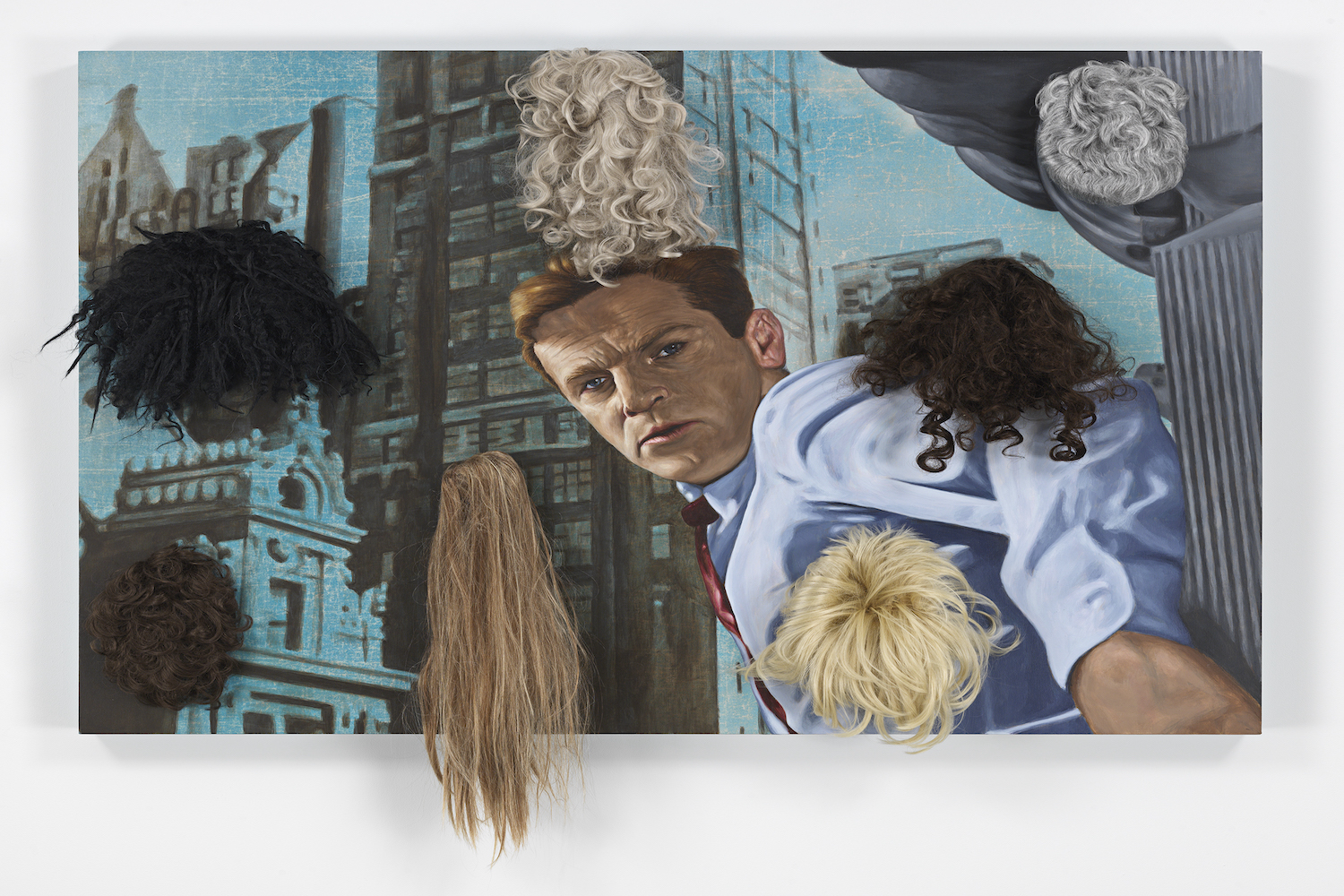 AS: It’s the history of the character in Fourteen Hours. That’s what he feels, actually.
Fourteen Hours could be dramatic play on a stage. The stage — the ledge — is minuscule. The ledge is where all the tension is. Your paintings and their cinematographic references — like Carnival of Souls and The Cabinet of Dr. Caligari and Fourteen Hours — present an interesting perspective on the stage.
For example, Carnival of Souls, in which zombies are dancing in a strange abandoned building outside the city. In Cabinet of Dr. Caligari, somnambulism is a circus attraction at first, so it’s kind of a circus stage really. Then the ledge in Fourteen Hours. These are all stages within the stage of the movie.
JS: Yeah. I hadn’t thought of it exactly that way. I did write this rambling text that is written on the insides of the cabinets of Based on the film “The Cabinet of Dr. Caligari” (2021). It’s semi-serious, with a lot of leaps of logic. But it’s about how the character of Caligari is both a sideshow huckster and a psychologist, and the somnambulist is sort of like us, the consumer, as in that we have become… It’s most obvious through Cambridge Analytica that we’re all like suckers for these hucksters to manipulate. No matter how smart we think we are, Trump can outmaneuver us on Twitter just because he’s taken an unassailable position in a way. That’s not so much about the stage, but it’s about the process of… There’s a book I read titled Wonder Shows, and in it, it said that one of the ways that people would introduce traveling science lecturers was to have a quote/unquote “somnambulist” sleeping in the window of a local apothecary, before the show actually opened up, for a couple of days. The somnambulist actually was a thing that people pretending to be experts on science would use to promote themselves. I suppose you’ve got something like that now on the internet, people talking about something like QAnon.
I noticed this thing when there was that documentary claiming that 9/11 was a fraud, and there’d be all this information about how physics proves that it couldn’t have happened. After that documentary came out, everyone would say, “Well, you know, the physics is all wrong.” But none of us are physicists. We don’t know any of that. We’ve just been told that. That’s the online version of the carnival barker in my mind, because I don’t know. Maybe it would have gone down, maybe not.

AS: One thing that strikes me and brings me back to your work is how carnival and religion can be tied: the carnivalesque features, the different figures and iconography, organized to manifest a spiritual order.
JS: I’m just not very spiritual in the normal sense. I just haven’t had my hands on any psychedelic drugs in a while. That’s the closest I get to being spiritual, I’m afraid. 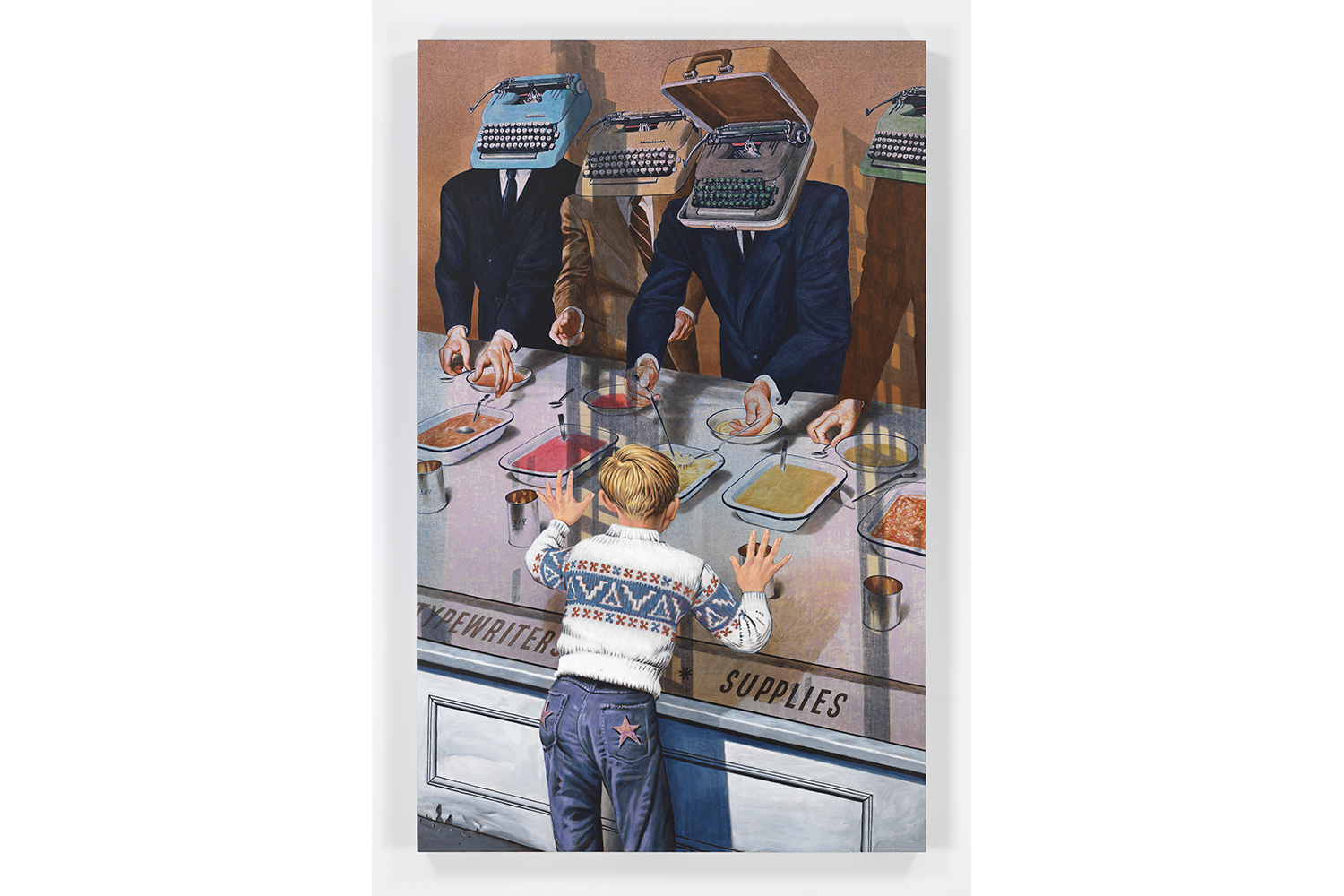 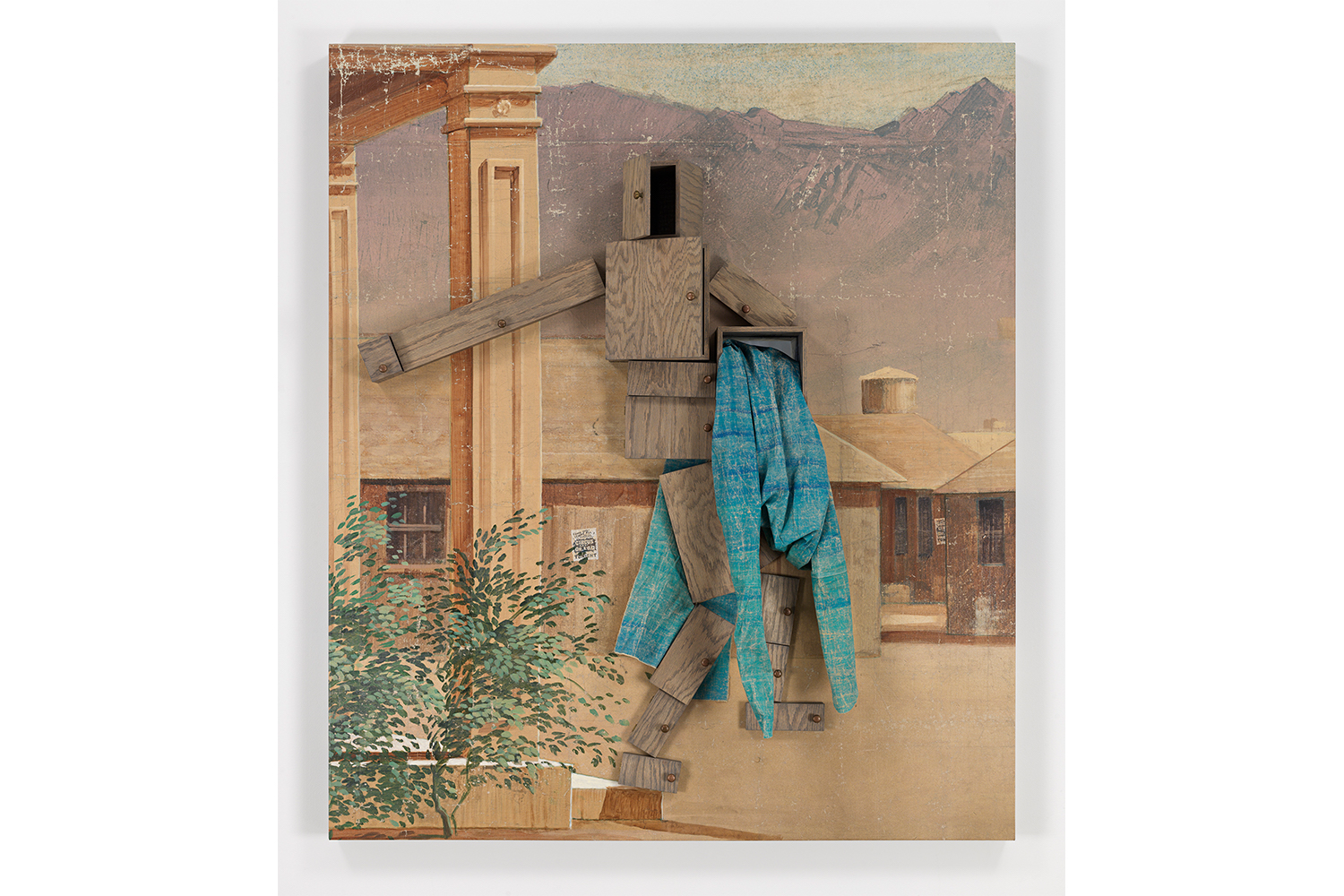 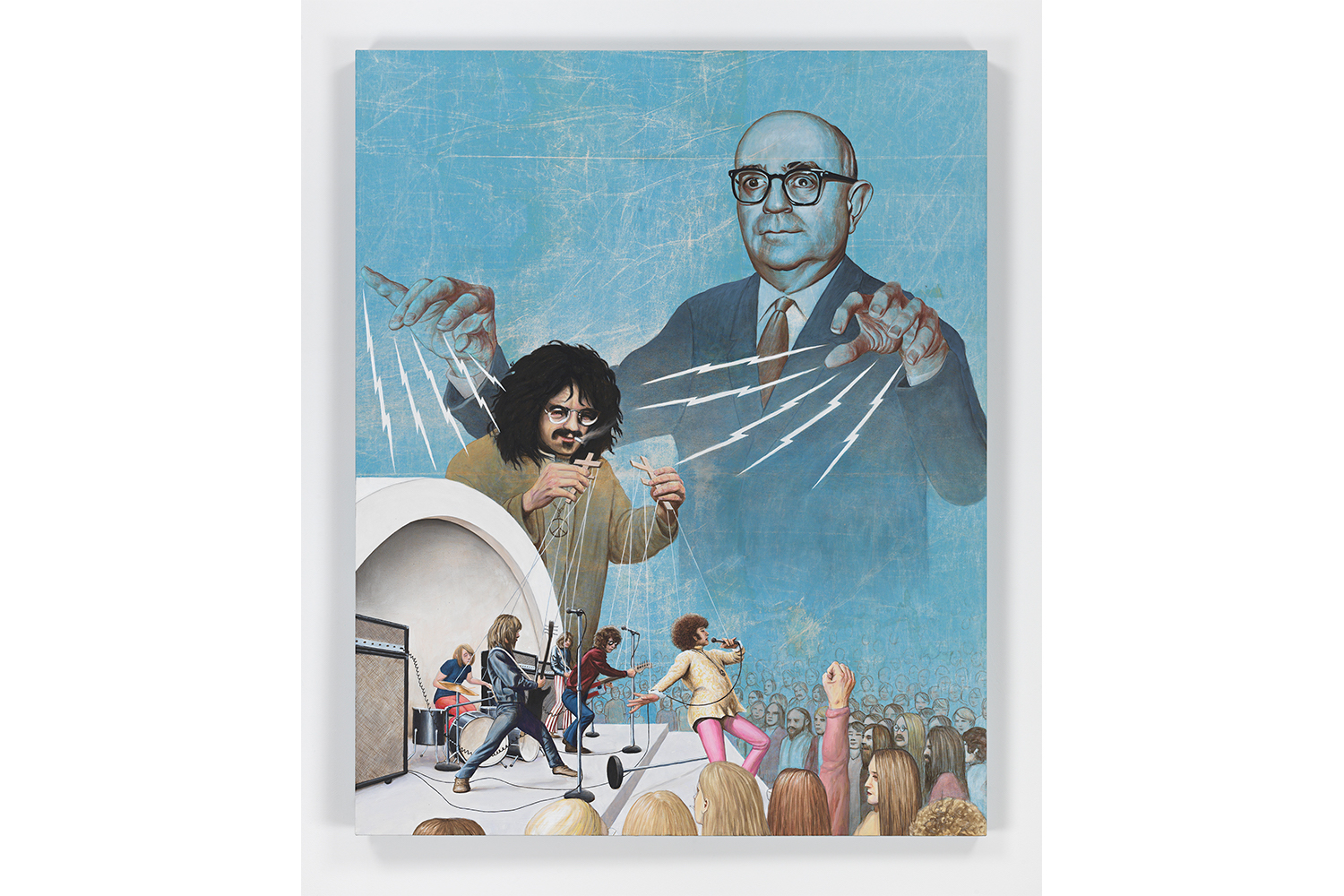 AS: Alt Right Myths #3, this painting, is another attempt to show how mass manipulation works. One mastermind is using waves, magnetism, hypnotism — I’m not sure. And the other one is a puppeteer. Could you tell me a little bit about that painting and the idea behind it?
JS: Well, I was reading up on the alt-right, and according to what I read, one of the main reasons that Andrew Breitbart began Breitbart, which was a major online voice for the alt-right, was that he thought that it was foreign influences, intellectual influences, that were brought into the United States that had destroyed America’s moral fiber and led to the current state of liberal Hollywood. He just hated liberals and he hated all these things, and he basically blamed the Frankfurt School for all of this stuff.
I felt that given all the other shit that was going on in the ’60s, that it would have happened one way or another. I didn’t think that John Sinclair, who was the manager of the MC5 in the beginning and the head of the White Panther Party… Maybe he was sitting there reading a bunch of European critiques of capitalism, or maybe he was just an old-time… America had so heavily buried any leftist ideas throughout its history. It was all considered a bunch of Jewish threats that were being imported in terms of labor relations. If the IWW [Industrial Workers of the World] was trying to organize, those organizers would be tarred and feathered, which is kind of a death sentence.
America had never allowed anything to take place, and education began to liberalize after World War II. Before World War II, it was all for rich kids, so it was pretty well biased towards what rich kids would want to learn. There were also in World War II people like the Frankfurt School intellectuals who came over and got academic jobs. Theodor Adorno would be one of these.
There’s another painting I did based on this thing called the Macy Conference, which was on cybernetics, which is a big bugaboo for people who think it’s mind control. But basically they started from a personality quiz that was given to a lot of Americans, that was devised by a team headed by Adorno. It determined that Americans could easily become fascists, so they were contemplating ways in which social engineering could keep fascism from reemerging. From my point of view, if you’re an alt-right person, I think that that basically is a fascist mindset. So, of course you’re going to be against things that are designed to dampen down a fascist mindset. But I think being against the fascist mindset at the end of World War II was actually a very intelligent and realistic thing to want.
I did three paintings about the whole Frankfurt School as a nefarious influence on America, but this is the one that was just basically… Those teenagers that the MC5 are playing for were ripe for something, and at that moment it was anger at the draft and the Vietnam War and racism. Nixon, when he ended the draft, he just kind of blew apart the youth culture because it united everybody’s fear of being drafted into this horrible war.