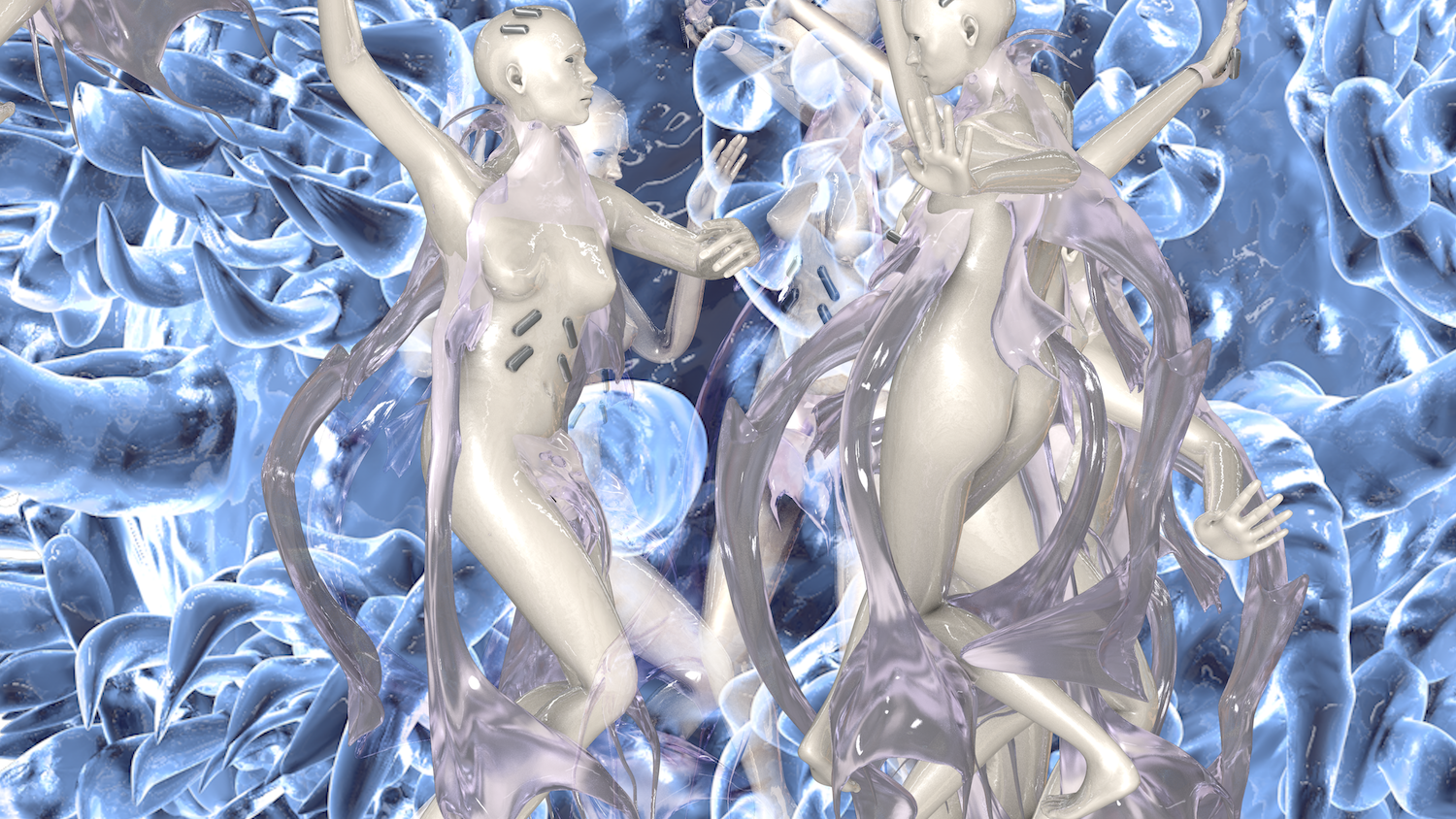 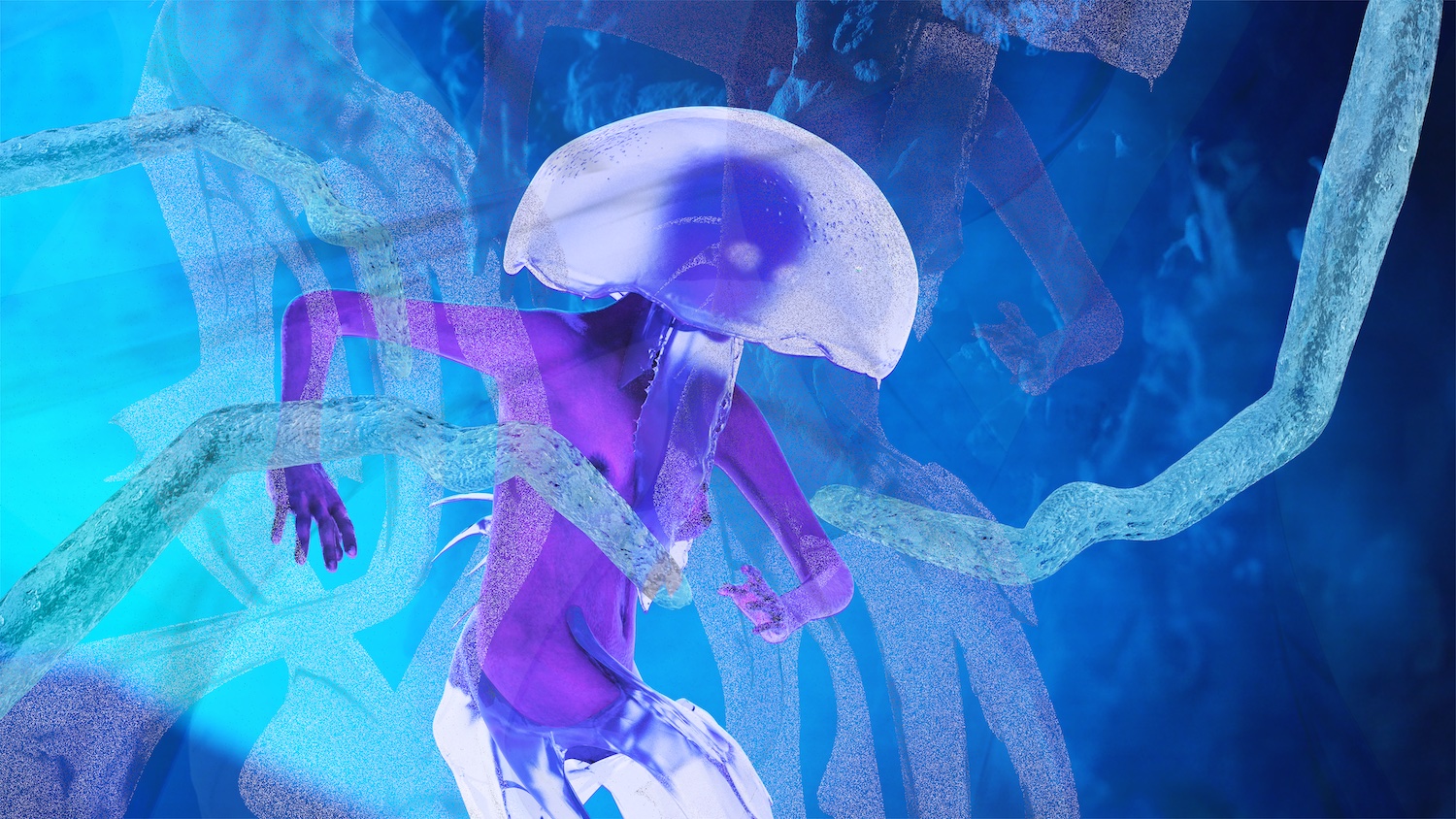 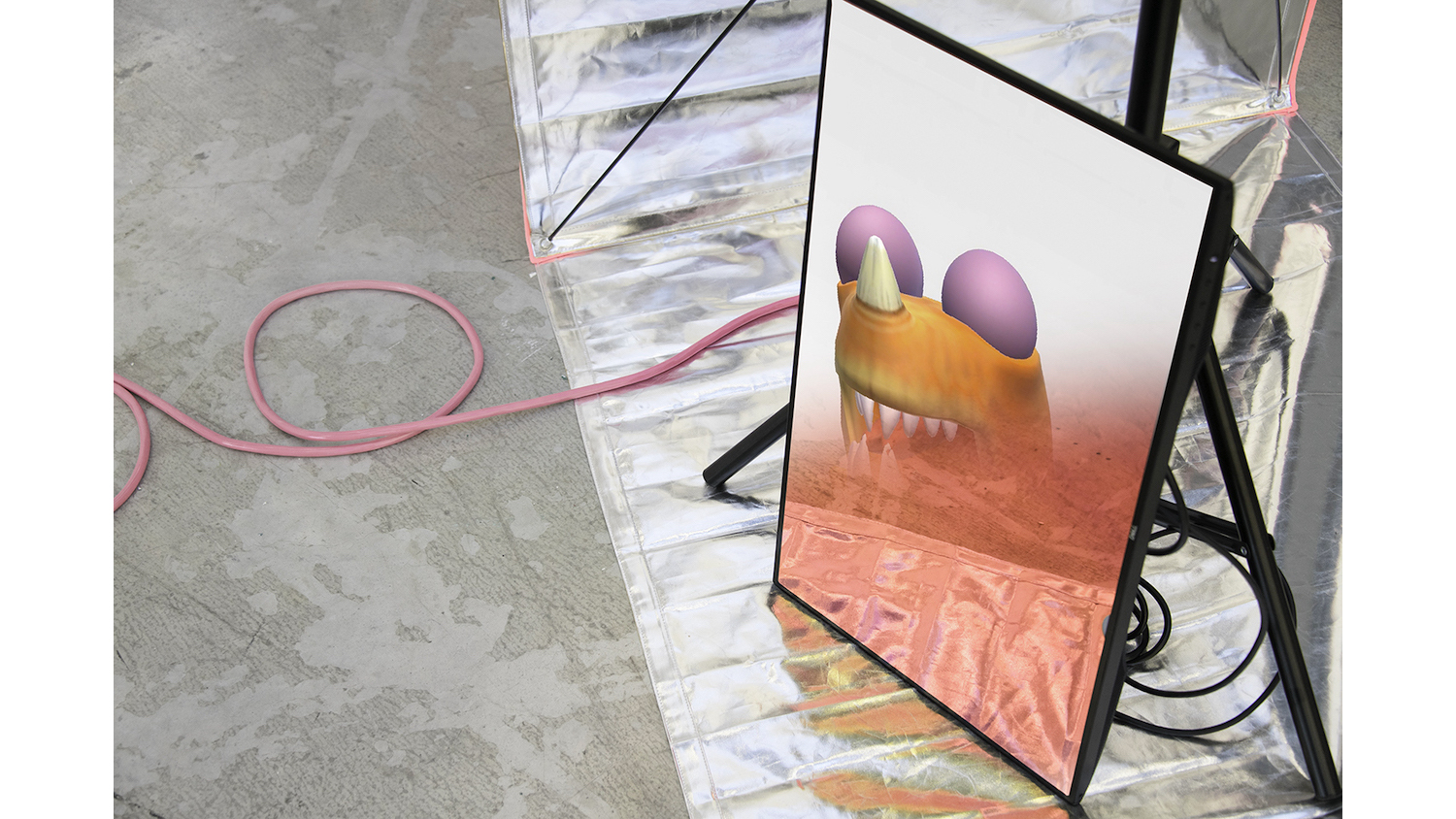 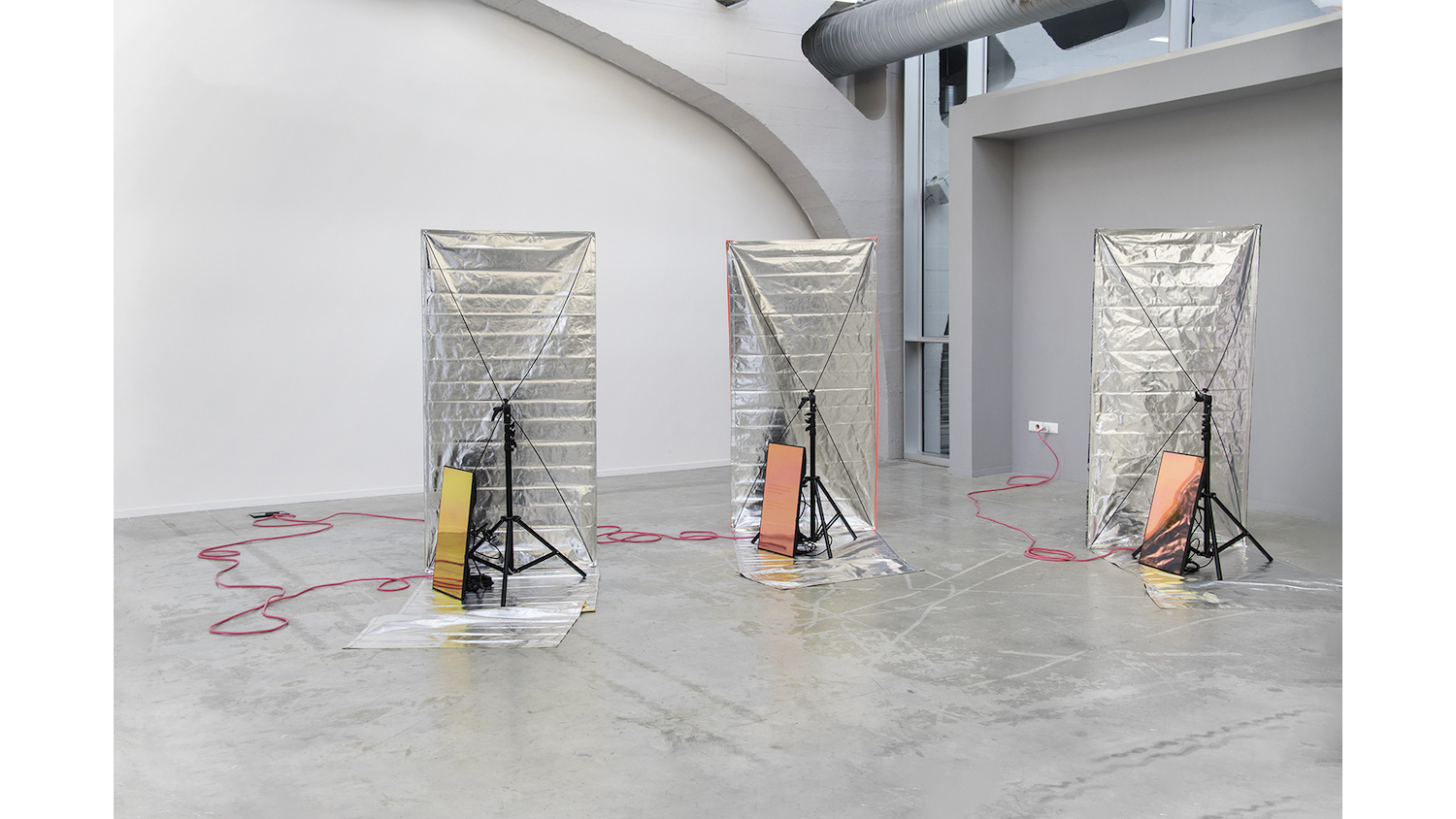 The complexity of our age is evident primarily in the splitting of the bonds between the subject and object of one’s desire. If desire underpins the production of meaning that regulates contemporary societies, we can’t ignore how advanced technologies impact it. Techno-scientific developments have further problematized the relationship between nature and culture as a predetermined binary system, reframing it as a flow whose meshes, or folds (following Deleuze and Guattari), offer the productive potential of constant re-signification. In Anti-Oedipus (1972), the two French philosophers demonstrated how the production of desire, which manifests and proliferates in a polymorphous way in every society, is opposed by capitalist events that return it to “production,” “distribution,” and “consumption.” The schizophrenia that it inspires arises precisely from the inability of the desiring subject — as a body without organs — to sustain the organism and its laws. Here the machine becomes paranoid: a crystalline image of the present neoliberal society.

As in a science-fiction scenario, Deleuze and Guattari anticipated what is today made tangible by technology’s accelerated progress. Recent developments in artificial intelligence, for example, demonstrate the difficult relationship between the desiring machine and the immuno-suppressed individual driving ecological collapse. Today, AI has reached a level of advancement that is not yet exhaustive but is nonetheless revealing for the near future. Its fields of application are multiple and the promise of efficiency and performance are infinite: from image recognition, used in the medical field to diagnose complex diseases; to virtual assistants that manage customer relationships; to autonomous robots, which will radically change the way we work. These promises have also materialized in tools for the control of desire, particularly sexual desire, such as erotic chatbots, sex robots, or toys. Welcome to the era of the digisexual.

Late capitalist industry did not take long to appropriate desire’s most intimate dimensions. By providing silicon surrogates and conversational chatbots, it provoked a radical rethinking of relational experience, sexual fantasy, and pleasure. But of course, it also prophesied the dehumanization of desire, no longer destined for exchange and empathy with other “desiring subjects” but targeted clinically at gratifying fleeting needs. To address this concern, large sex robot companies declare the possibility of sex machines to sate affective deficits and correct behaviors deemed deviant. Yet the price of this is not only the experience of sexuality. Behind the promise of emancipation from alien work and the resolution of emotional disorder there lies an inhuman infrastructure performing its human capital to satisfy the few. 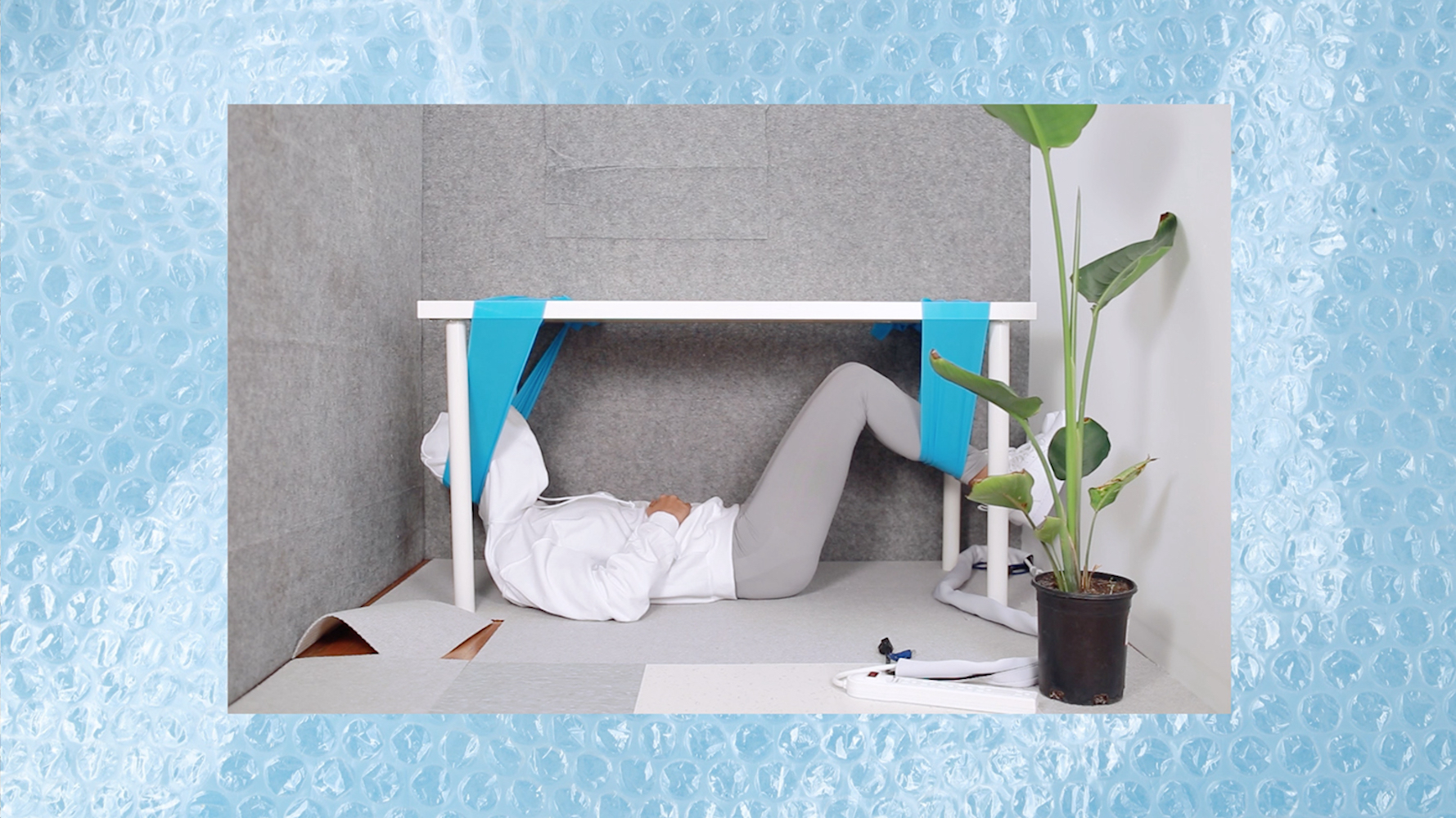 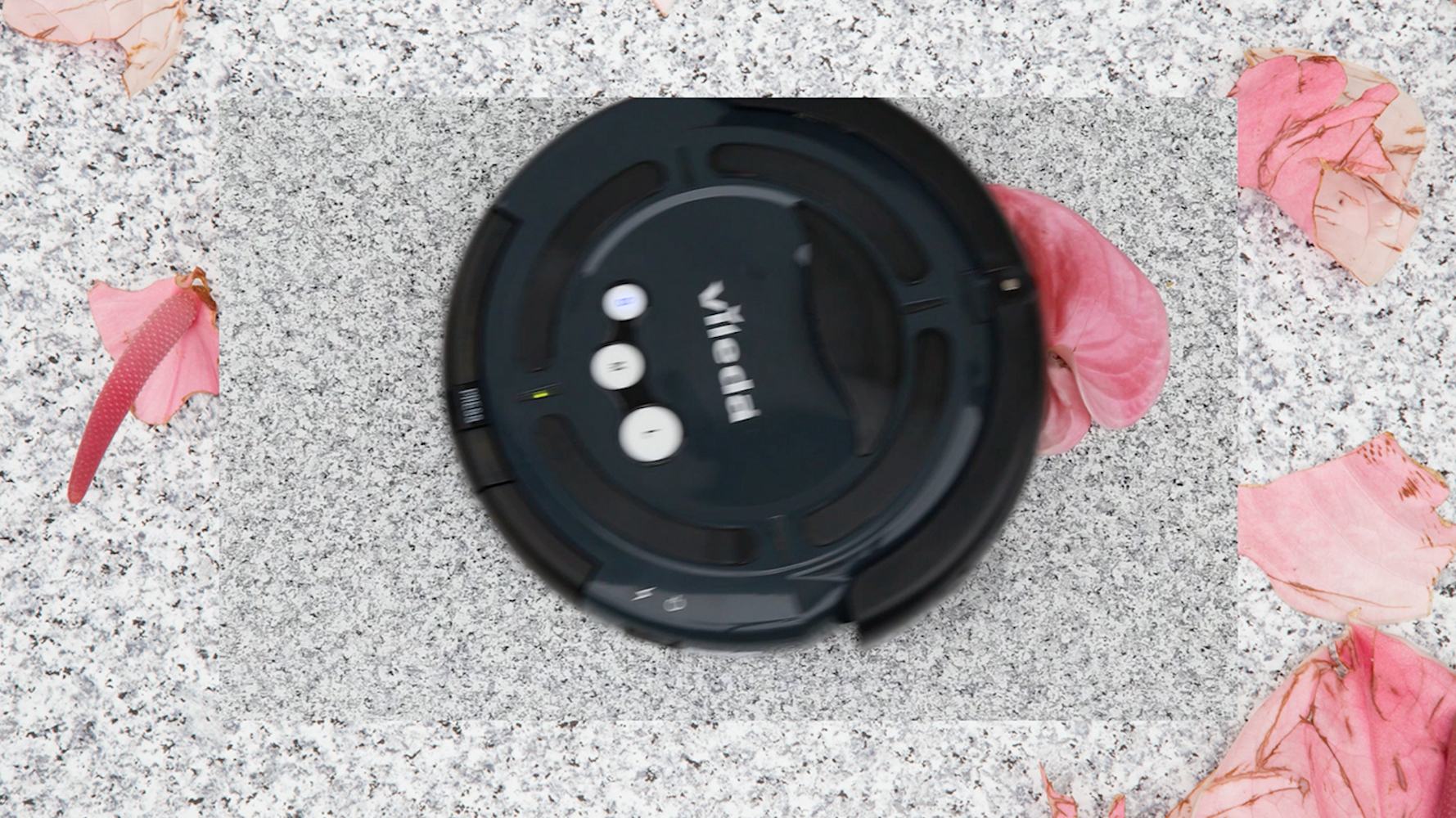 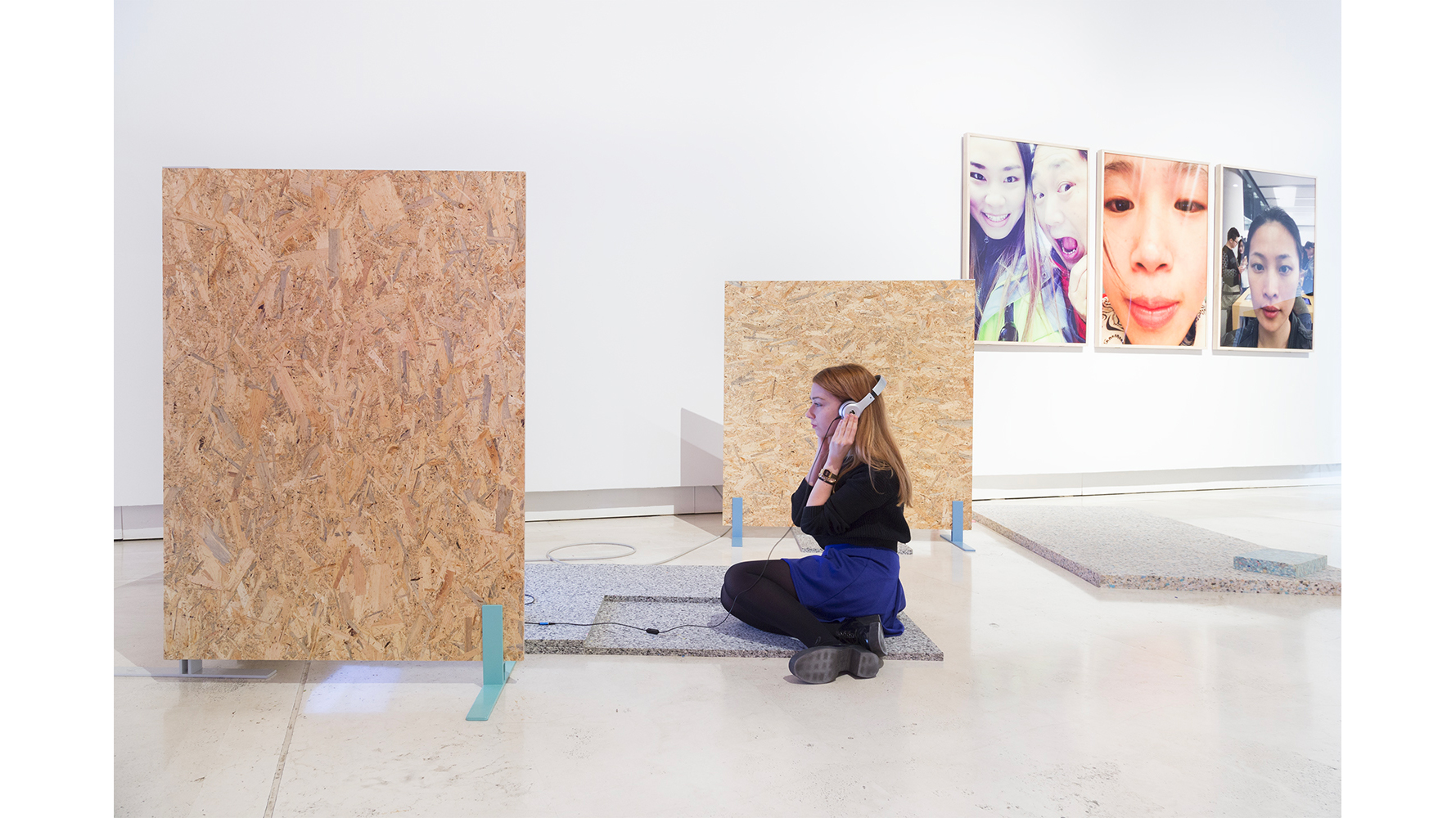 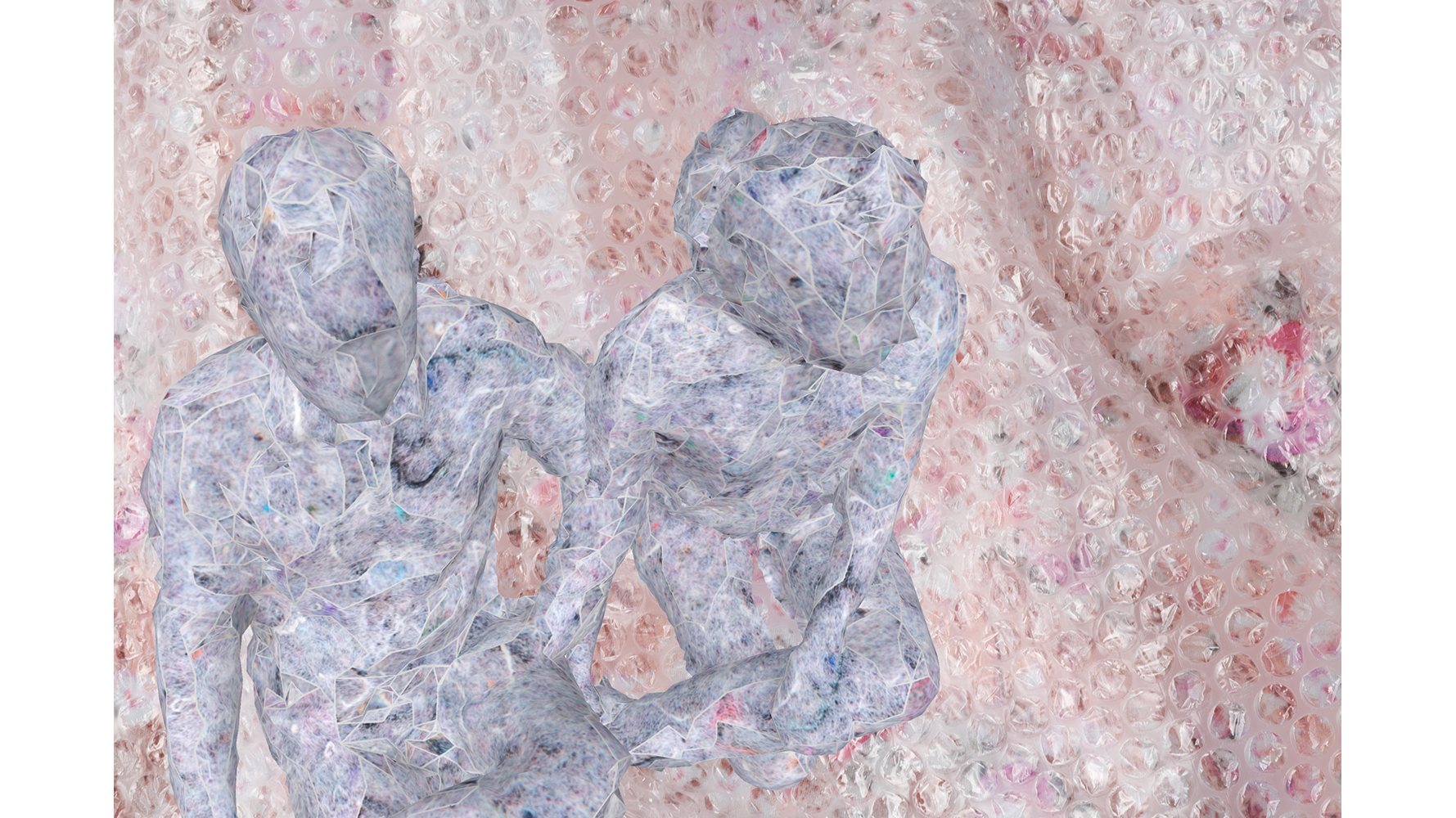 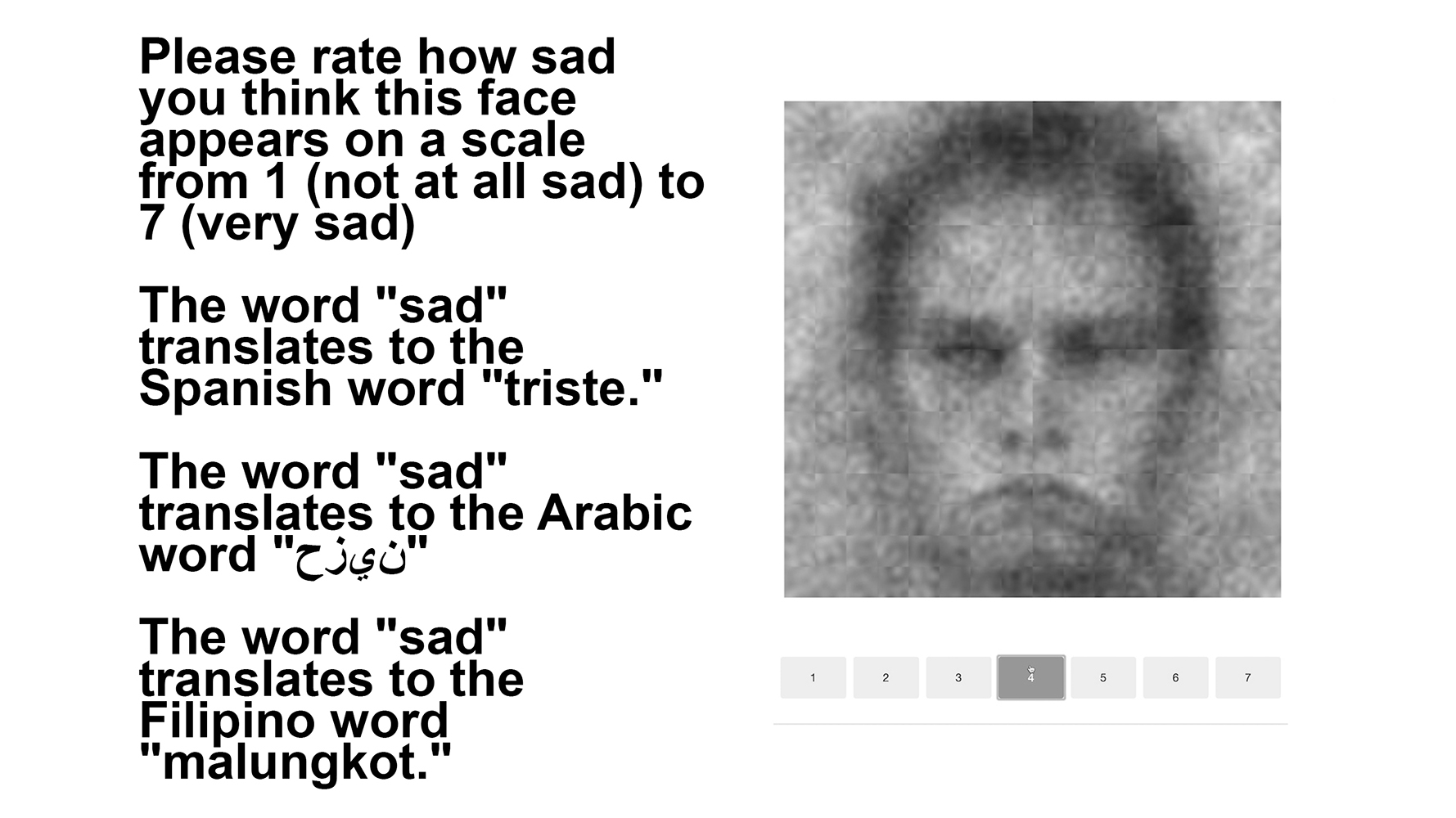 The work of Elisa Giardina Papa is based on an analysis of these processes. In works such as Technologies of Care(2016), Labor of Sleep (2017), and Cleaning Emotional Data (2020), she addresses the impact of new technologies on gender, sexuality, and work in relation to neoliberal capitalism and postcolonial societies. Technologies of Care, in particular, is the result of a situated study of new “care jobs,” i.e. forms of precarious work that offer affective services consisting of repetitive and alienating digital tasks. The artist uses the web platform Fiverr — where one can request low-cost services — to track down some of these workers, seeking out their stories in order to highlight the system’s dependence on the most vulnerable social categories.

In Worker 7 – Bot? Virtual Boyfriend / Girlfriend (2016), Giardina Papa presents the results of the artist’s three-month relationship with an artificial chatbot, made prior to discovering that the apparently automated service was in fact staffed by hundreds of human workers. (These individuals were ultimately replaced by algorithms anyway for their reduced cost and higher “performance.”) The paradox of a relationship substantiated via man-machine interface is that it brings together individuals of different origins, whose agency, understood as a driving force and desire, no longer converges toward the same object and consequently shatters into myriad isolated entities (no longer able to create significant links). In Cleaning Emotional Data, the artist questions how facial recognition algorithms redesign human emotions on the basis of facial data. Often these data are based on nonrepresentative samples such as standard expressions or male faces, highlighting the inadequacy of a binary reference system based on statistical logic. The work is the result of the artist’s direct experience of a number of North American companies working as a dataset processor training machine-learning algorithms. On one occasion, the artist’s attempt to train an algorithm for image recognition fails when she provides the AI with images of her grimacing that it can’t classify, highlighting the absurdity of such a classification system. Giardina Papa’s work prays we reflect on technology’s failed promise to liberate us from work, which instead accentuates social division by transforming emotional data into low-cost labor — a tool for penetrating the meshes of society down to its most intimate aspects. 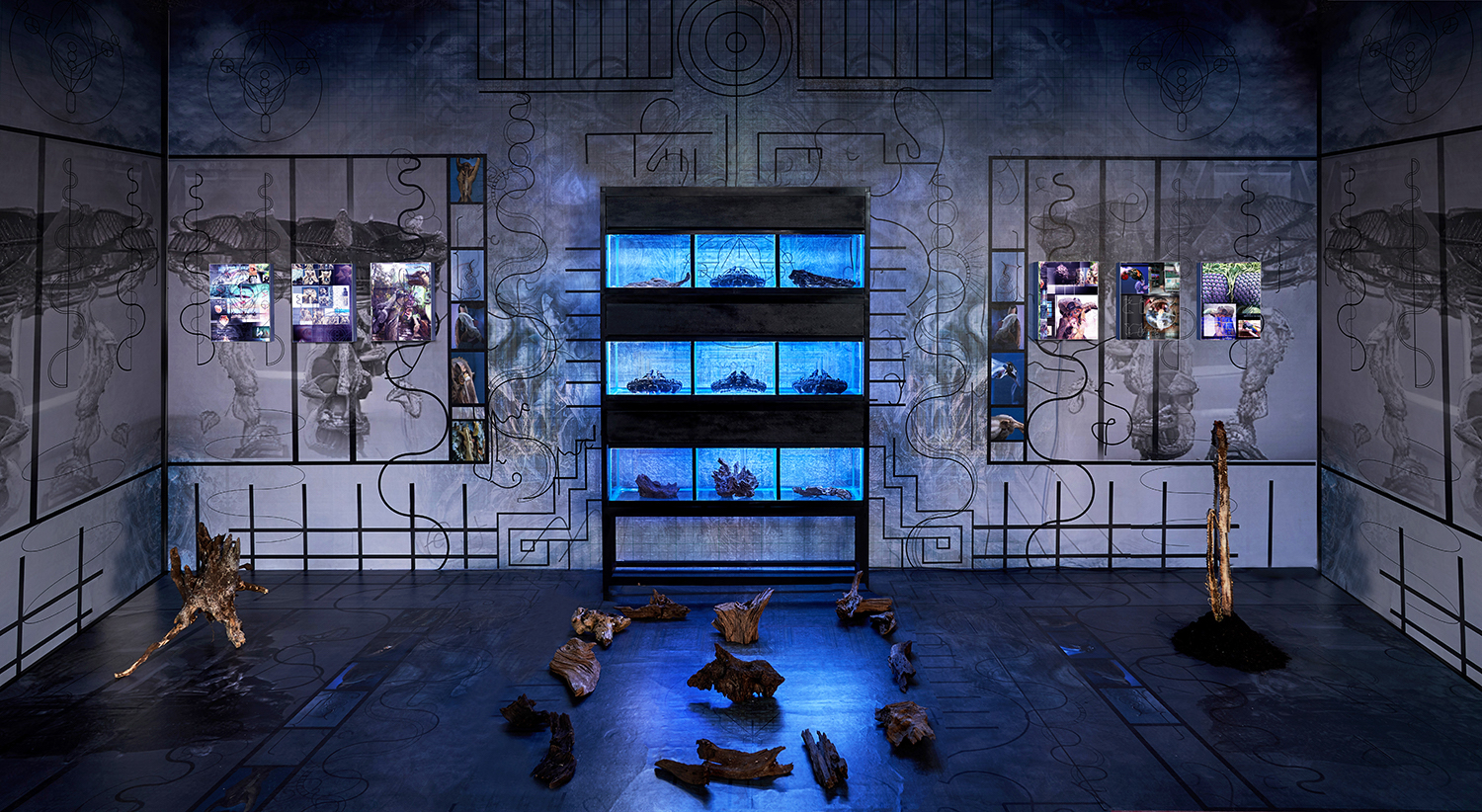 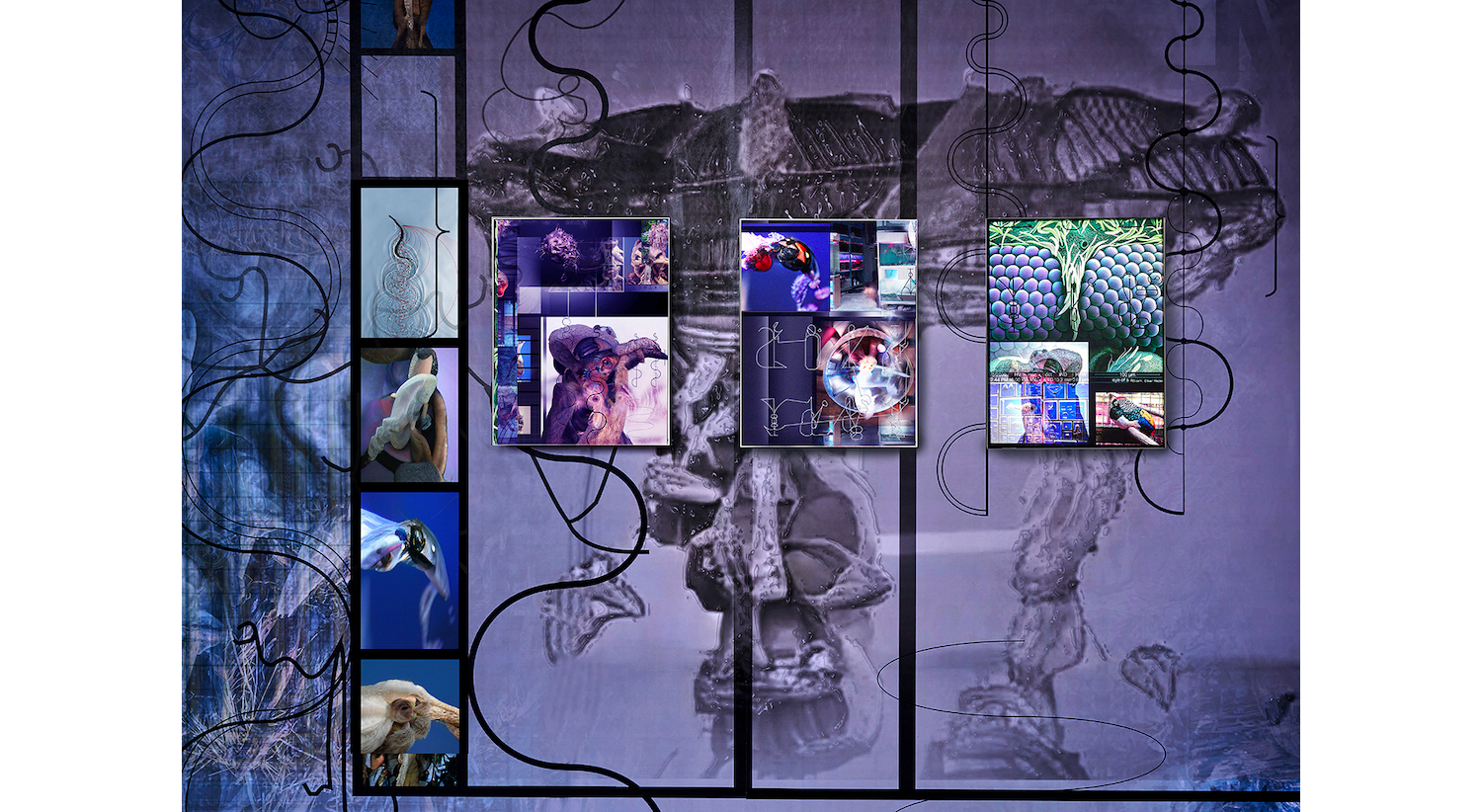 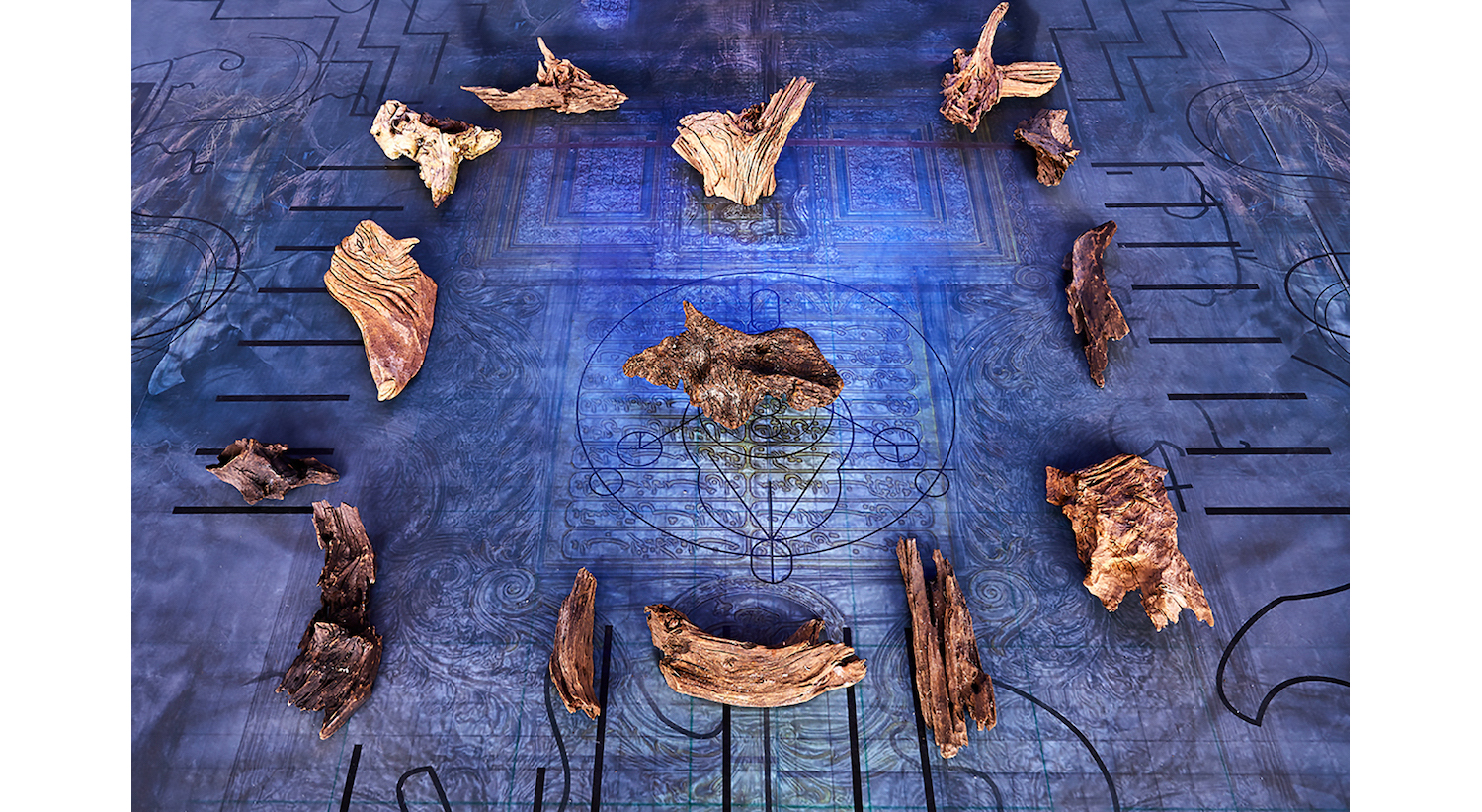 Capital seeks and reduces body fluids to merchandise: the sweat and cheap blood of the labor force available throughout the Third World; but also the fluids of the desire of First World consumers who reduce their existence to a commodity by transforming it into a hyper-saturated state of confusion. Hyper-reality doesn’t cancel class relations: it simply intensifies them.

If, on the one hand, we are witnessing the commodification of the most intimate dimension of bodily functions and individual identities, on the other hand it offers the opportunity to rethink gender away from rigid and insuperable categories. This is, moreover, reinforced by the pharmaceutical industry, which allows us to redefine gender identities through hormonal dosages, devices for the termination of pregnancy, and sexual enhancers. According to the philosopher Paul B. Preciado, the very notion of gender

is born in the medical language… invented in the 1940s and 50s in the diagnostic context of intersex children. It is therefore a notion that we cannot use without knowing the political consequences that this term has had in the medical protocols in use for the recognition of all newborns in a Western medicalized context.

Preciado thus affirms the non-neutral role of technologies in producing sexual identities. Xenofeminism picks up on this problem. Theorized by the artist collective Laboria Cuboniks, the group’s Manifesto proclaims the need to “strategically deploy existing technologies to redesign the world… proposes the necessary assembly of techno-political interfaces reactive to these risks.” This statement demands we redesign technology to better respond to the new identity and sexual needs of a society in which women, queers, and people of non-conforming gender play an unprecedented role. Echoing Donna Haraway’s admonition to “make kin, not babies,” their ultimate goal is to defamiliarize the biological family and re-familiarize alternative networks of solidarity and intimacy. By extending the concept of kinship to the exchange between species, they thus invite us to overcome the logic of the Anthropocene and Capitalocene.

Joey Holder’s work follows precisely this logic of sharing between species, using AI as a tool for genetic reconfiguration. For her installation Khthon (2020) — a Greek term that refers to the earth as the subsoil and site of secret forces — the artist used Artbreeder, an algorithm available online to generate images from open-source datasets. The imagery relates primarily to the animal kingdom, with Holder exploiting the multiple combinatorial possibilities of artificial intelligence to generate new forms of life. In her own words, “Computation strives for biological variety.” Wielding Artbreeder for its capacity to edit genes and crossbreed, Holder conjures an alchemical universe of mythological creatures, chimaeras, ghosts, and other abstractions. Her fabric lightboxes are juxtaposed with a series of silicon sculptures, whose forms derive from an algorithm’s elaboration of insect genitalia. In addition to revealing a hidden nature, these sculptures manifest polymorphic and alien structures as possible objects for sexual pleasure. In doing so, they reify desire from a multispecies perspective. 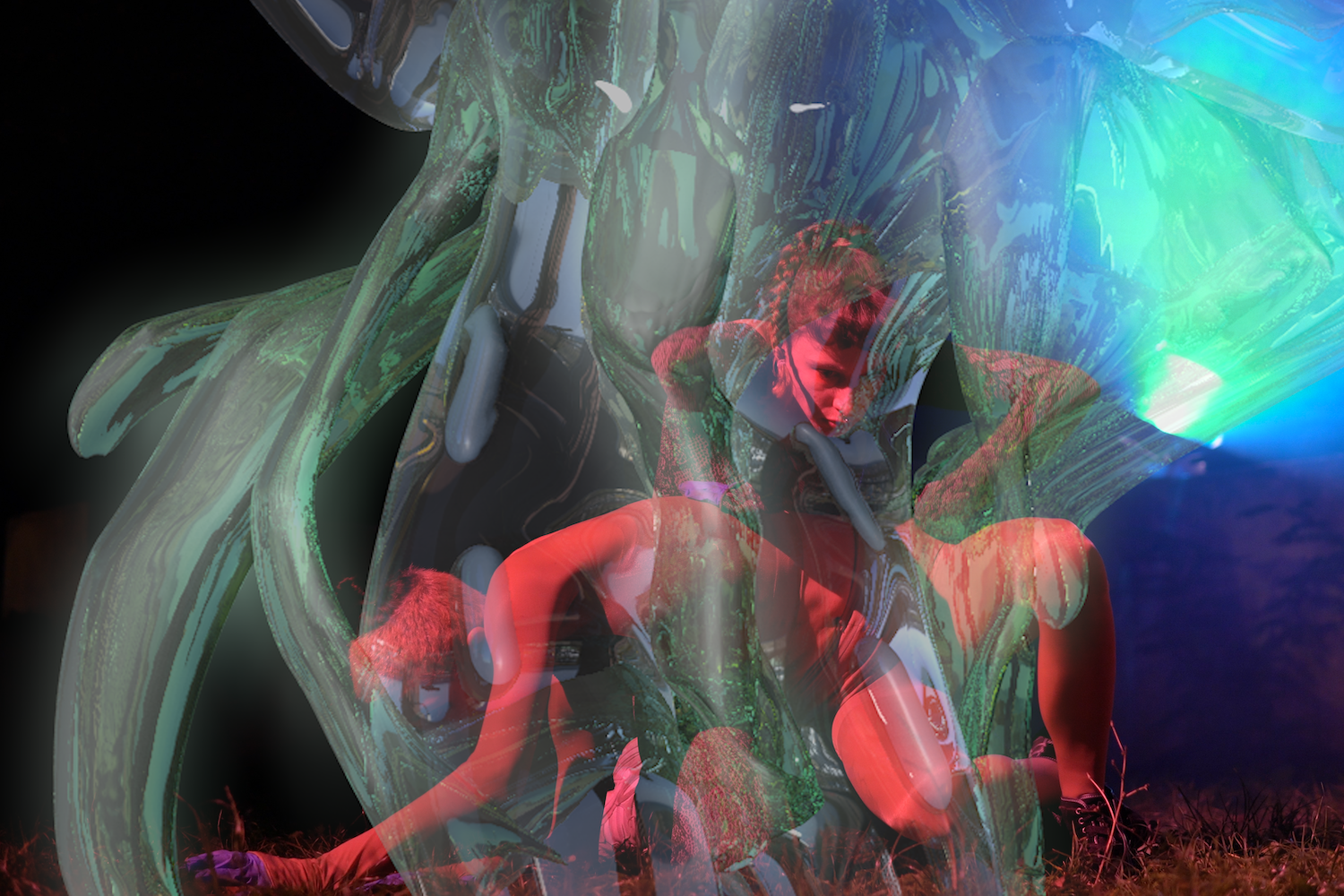 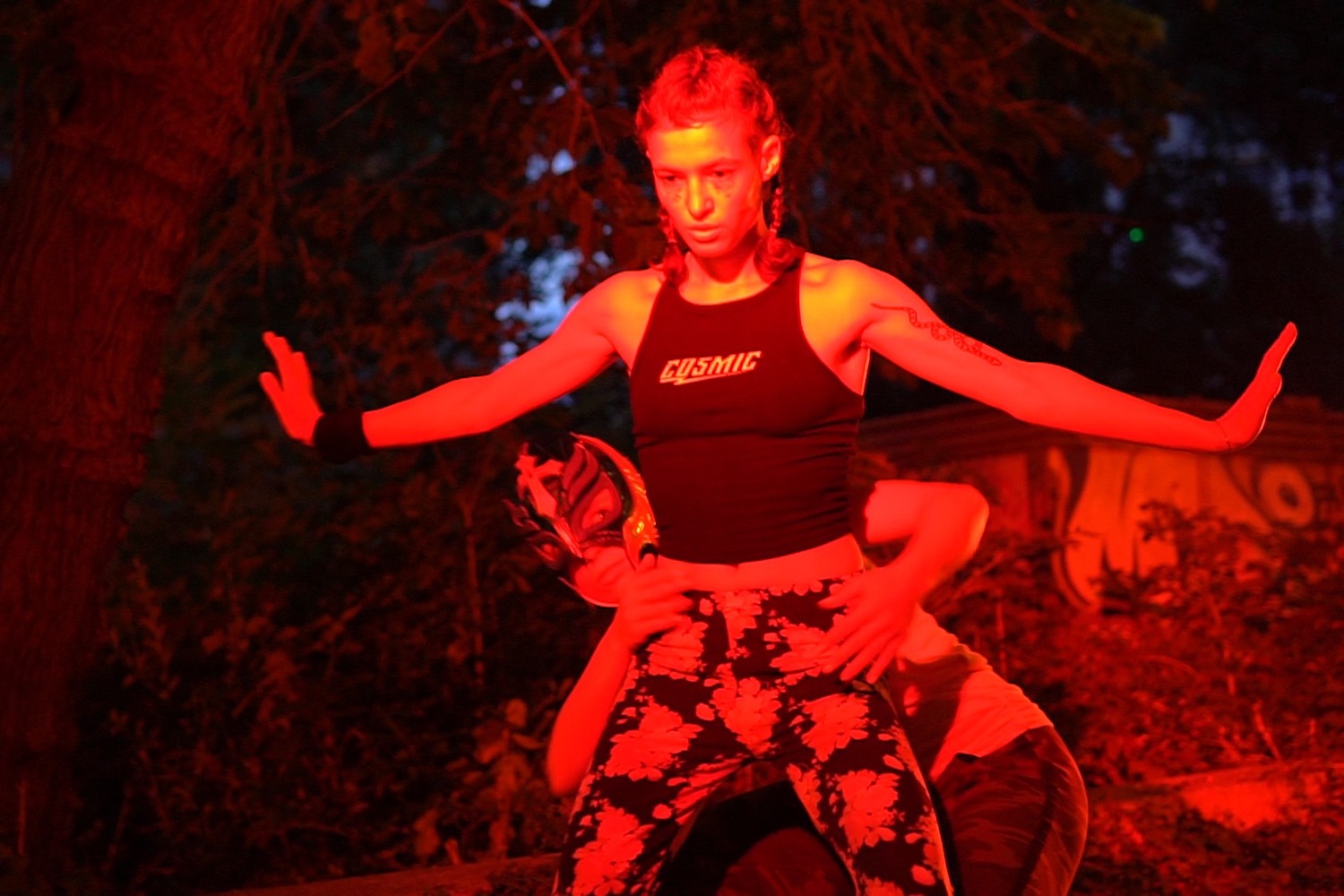 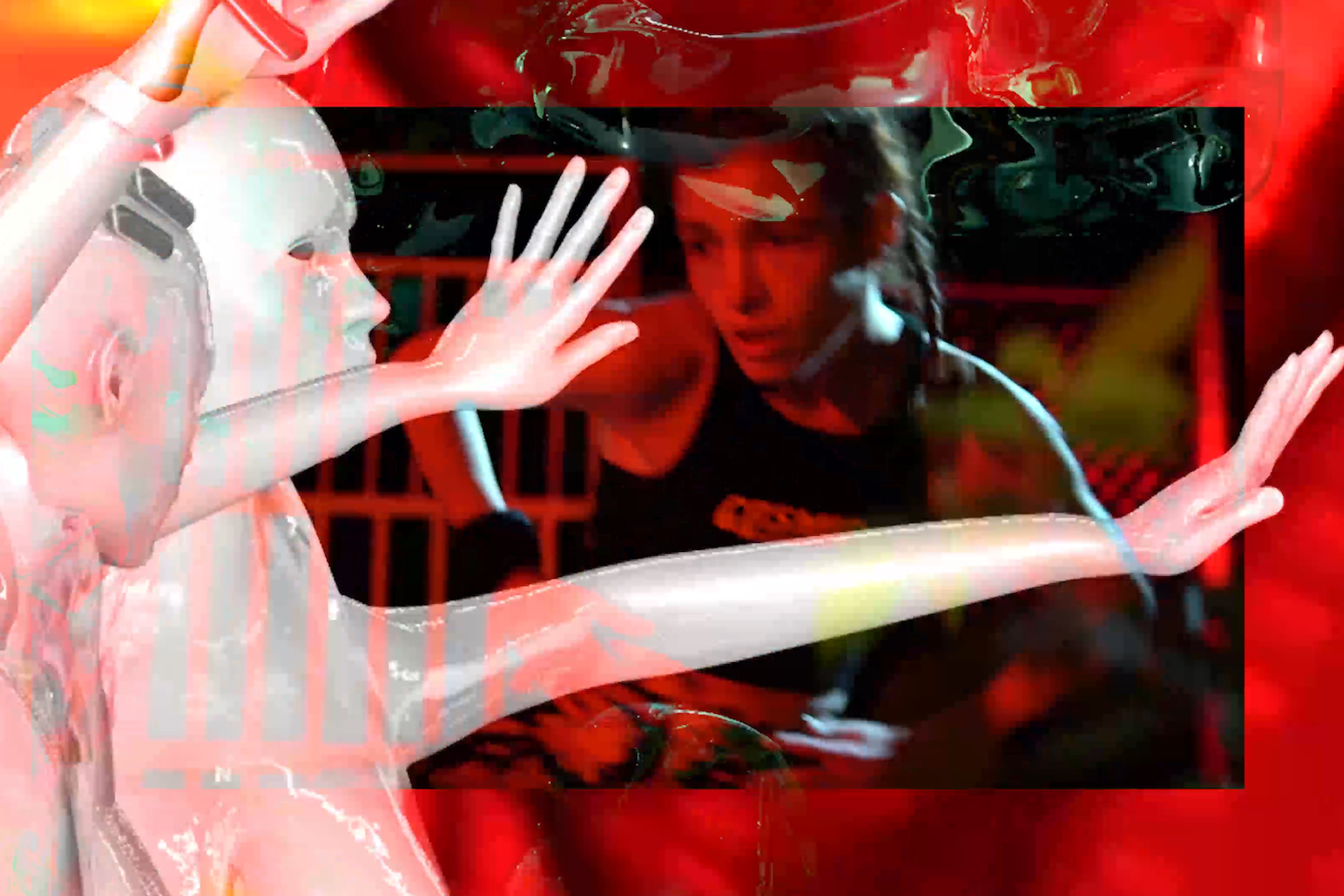 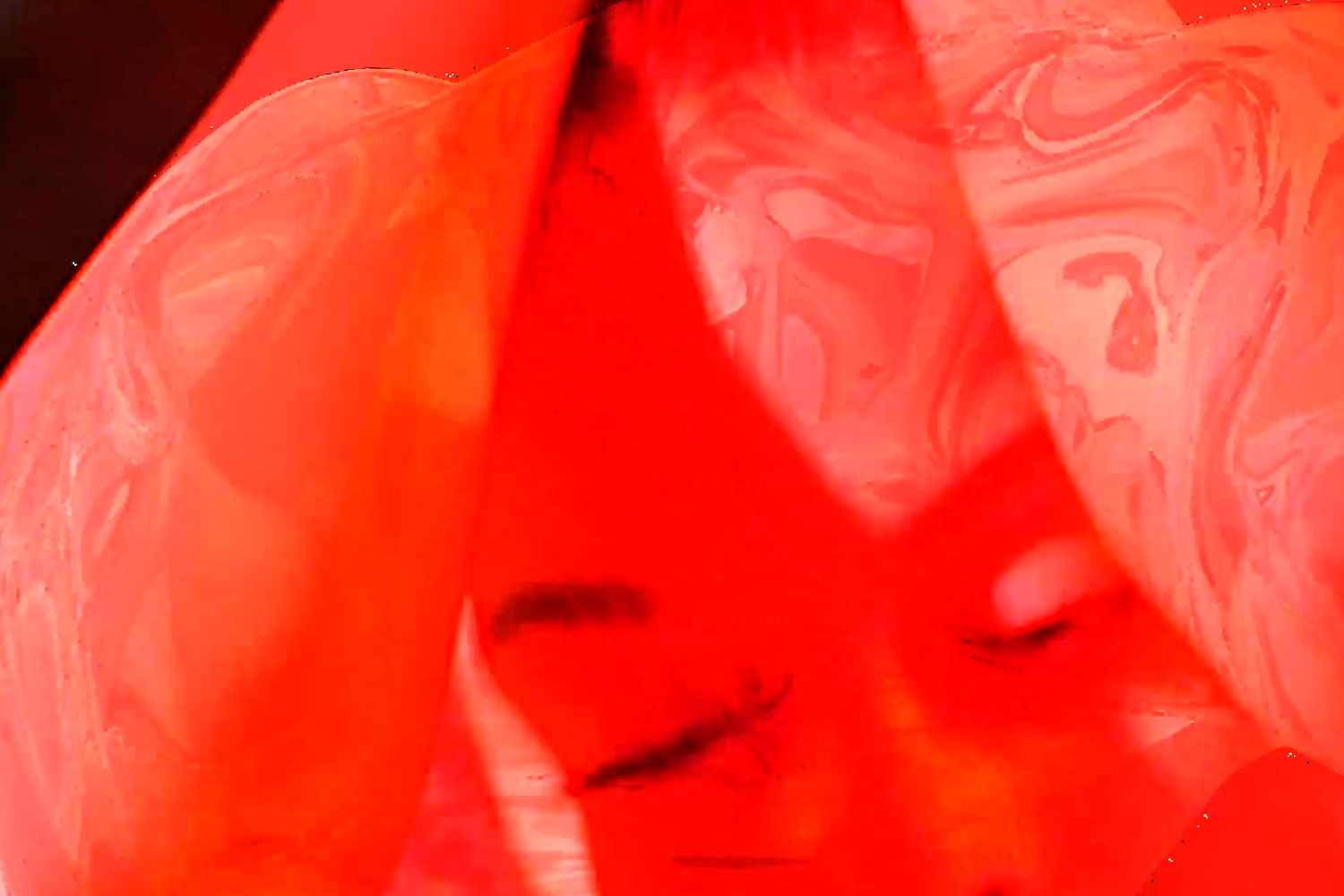 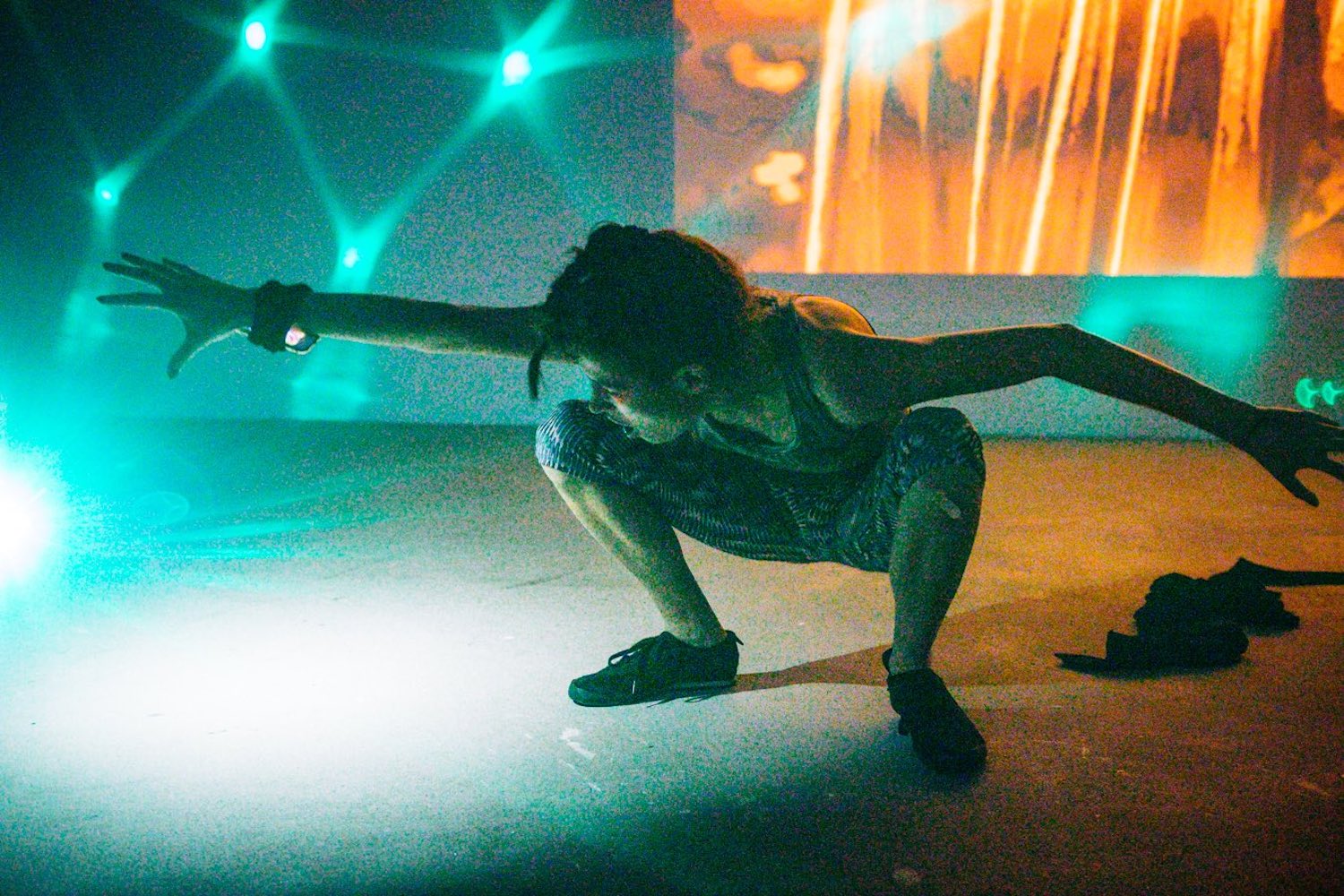 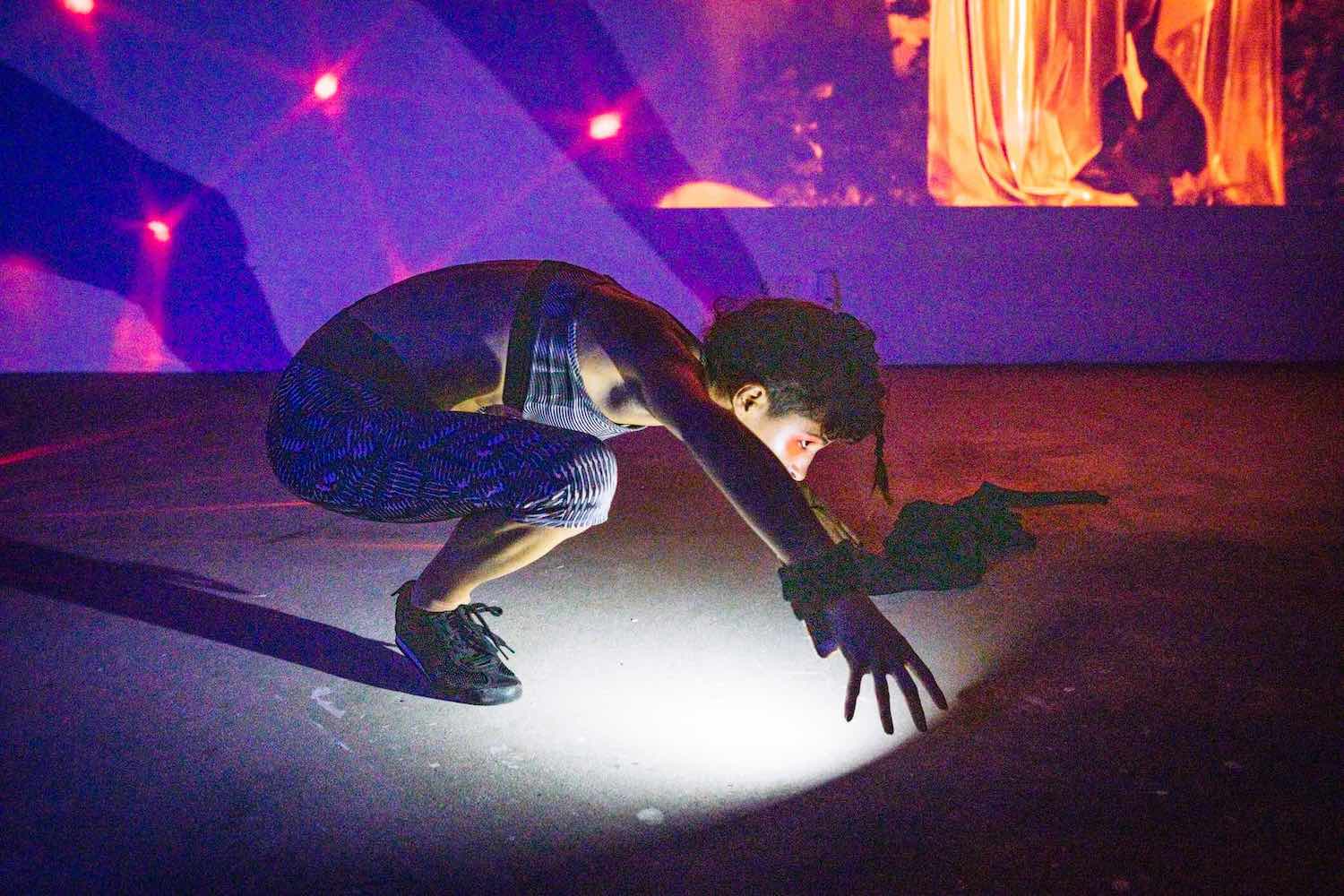 The work of Austrian artist Johanna Bruckner is a variation on this theme, identifying in other species the starting point for a reconfiguration of desire centered on the performer. In works such as Molecular Sex (2020), Polymorphic Sensibilities (2020), and Atmospheric Drafts of Intimacy (2020) — audiovisual installations often accompanied by performances — the artist investigates complex sexual changes to the body encountered by advanced technologies. She is inspired by the theories of the philosopher Karen Barad, who identifies in matter at its molecular stage the same characteristics of “queerness” that regulate bodies in terms of performativity, reproducibility, and the ability to go beyond imposed boundaries. In Posthumanist Performativity: Toward an Understanding of How Matter Comes to Matter (2003), Barad starts from the observation of physical phenomena of matter as unclassifiable, questioning the hegemony assumed by linguistic theories that purport to describe everything and define ourselves as a form of cultural representation.

In Molecular Sex, Bruckner follows this same principle, entrusting a sex robot with the task of embodying different forms of sexuality partly referable to two existing species: a “brittle star” belonging to the class of echinoderms (which includes starfish) and a bacterium called Wolbachia. Each of these species has very different sexual and reproductive characteristics. Some are hermaphroditic and self-fertilizing, while others reproduce asexually by regenerating or cloning fragmented body parts. Wolbachia’s survival is due to temporary alliances and symbiotic attachments, established with different target bodies of various species regardless of their sex. For a third class, the sexbot seeks to transcend the biological sexual XY chromosomes, identifying with a gender-fluid individual. The work materializes in an incessant flow of plastic bodies that dismember, recompose, and multiply, staging a complex sexual ritual with alien rhythms. The plastic surface encompasses everything, manifesting in its inexorable capacity to alter the biochemistry of bodies. The artist trains particular focus on bisphenol A (BPA), whose presence in a large proportion of food containers threatens the endocrine system, affecting sexuality and fertility. Such systemic micro-transformations remind us that the body, sexual identity, and desire are all vulnerable to mutation. Molecular Sex, which proceeds by overlapping layers, also develops thanks to the presence of an AI that, according to the artist, “stores information in the bot’s body, through which it learns to perform as an aleatory, molecular intra-participatory sexual species.” Here too the algorithm serves as a means to go beyond language labels and imagine multiple datascapes within which bodies and multispecies relationships come to life through new perspectives. The process of continuous re-signification thus assumes a central role in the dynamics of desire.

In different ways, these three artists confront the radical changes that artificial intelligence has introduced in the definition of desire. Giardina Papa foregrounds social changes to the sphere of work — the site of desire’s production within the capitalist machine. Holder and Bruckner use AI as a tool to speculate on new forms of cultural processing, exploding rigid categories and thereby safeguarding agency at the heart of world exploration.

Daniela Cotimbo is an Italian art historian and curator. She is a founding member of Re:Humanism, a cultural association whose international award is dedicated to the relationship between art and AI. She’s presently curating the Re:Humanism Art Prize’s second edition, whose exhibition runs May 5–30 at MAXXI, Rome. 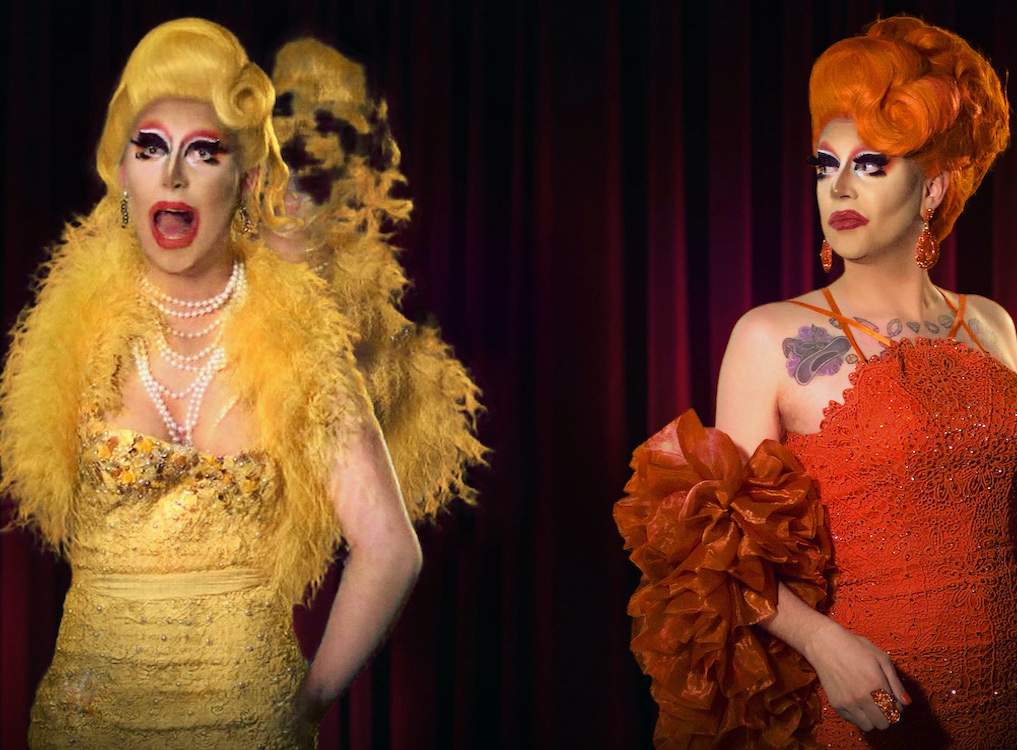