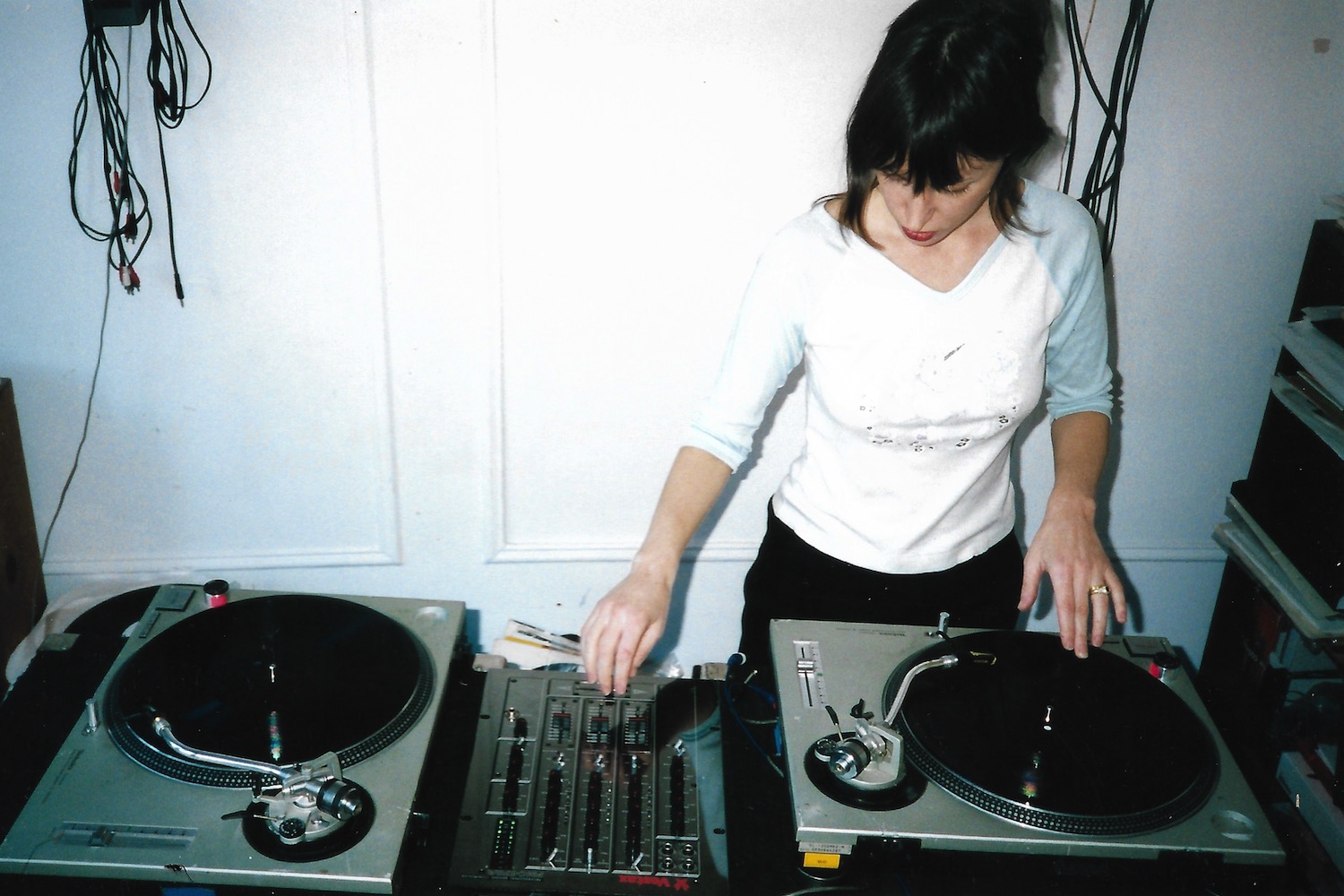 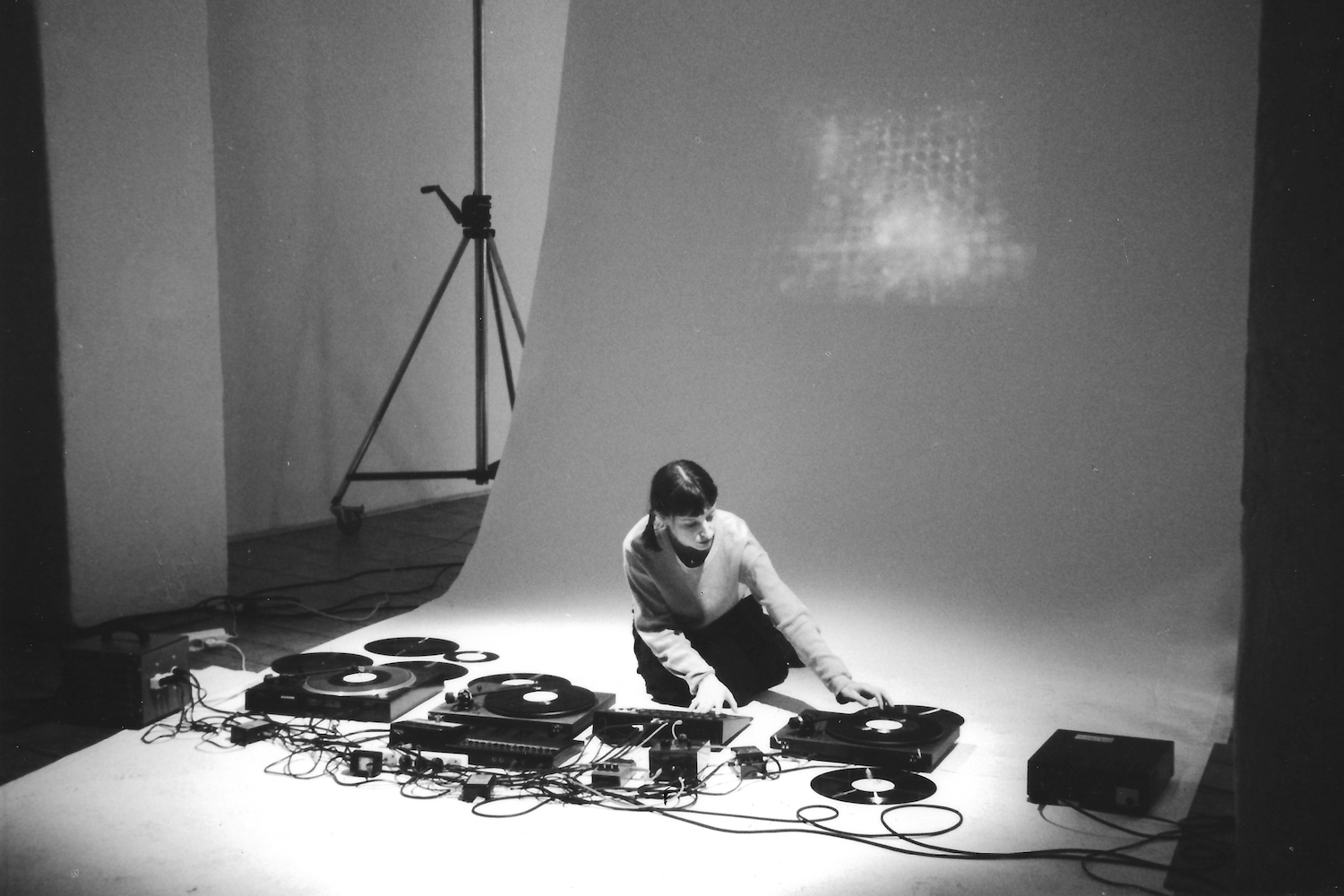 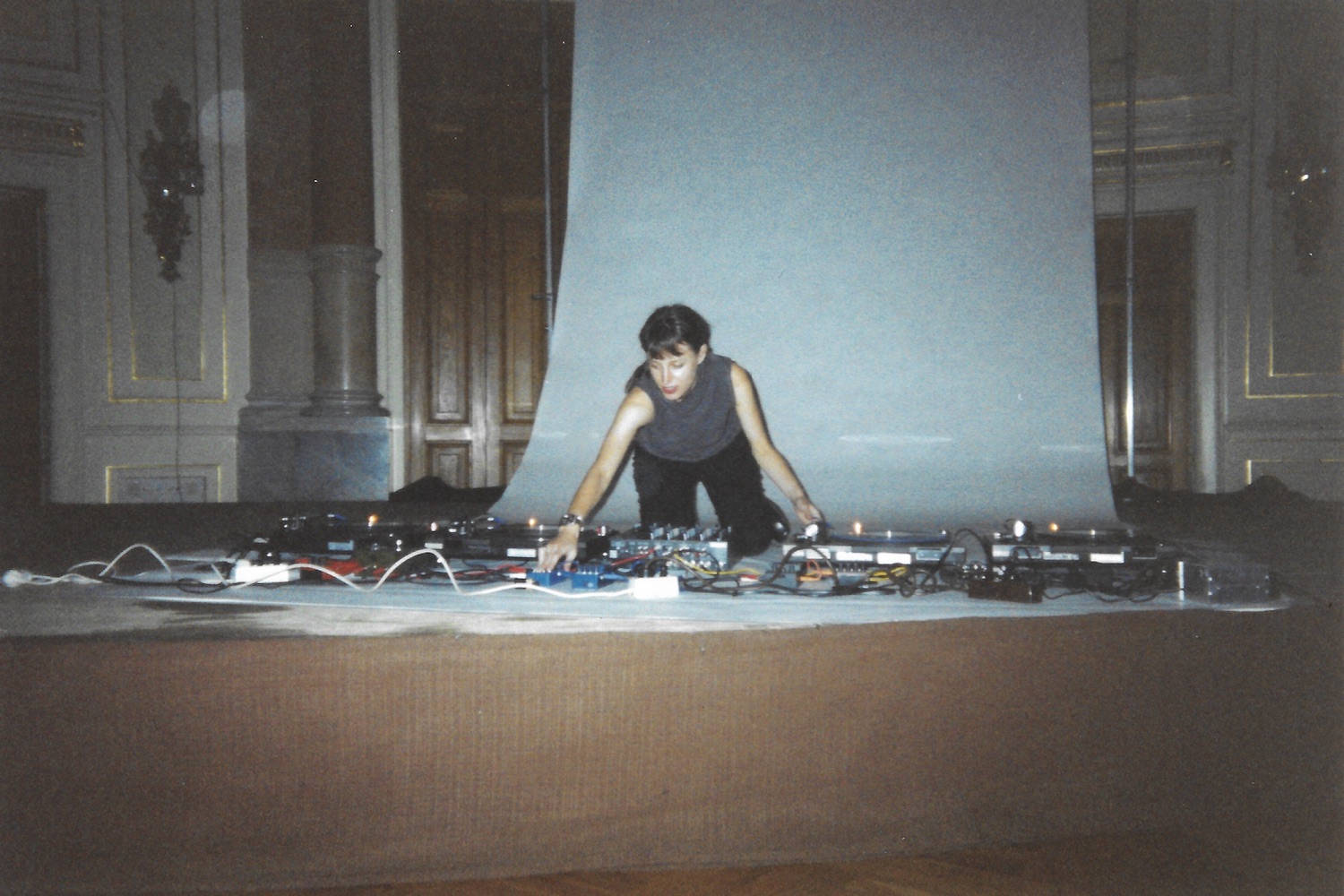 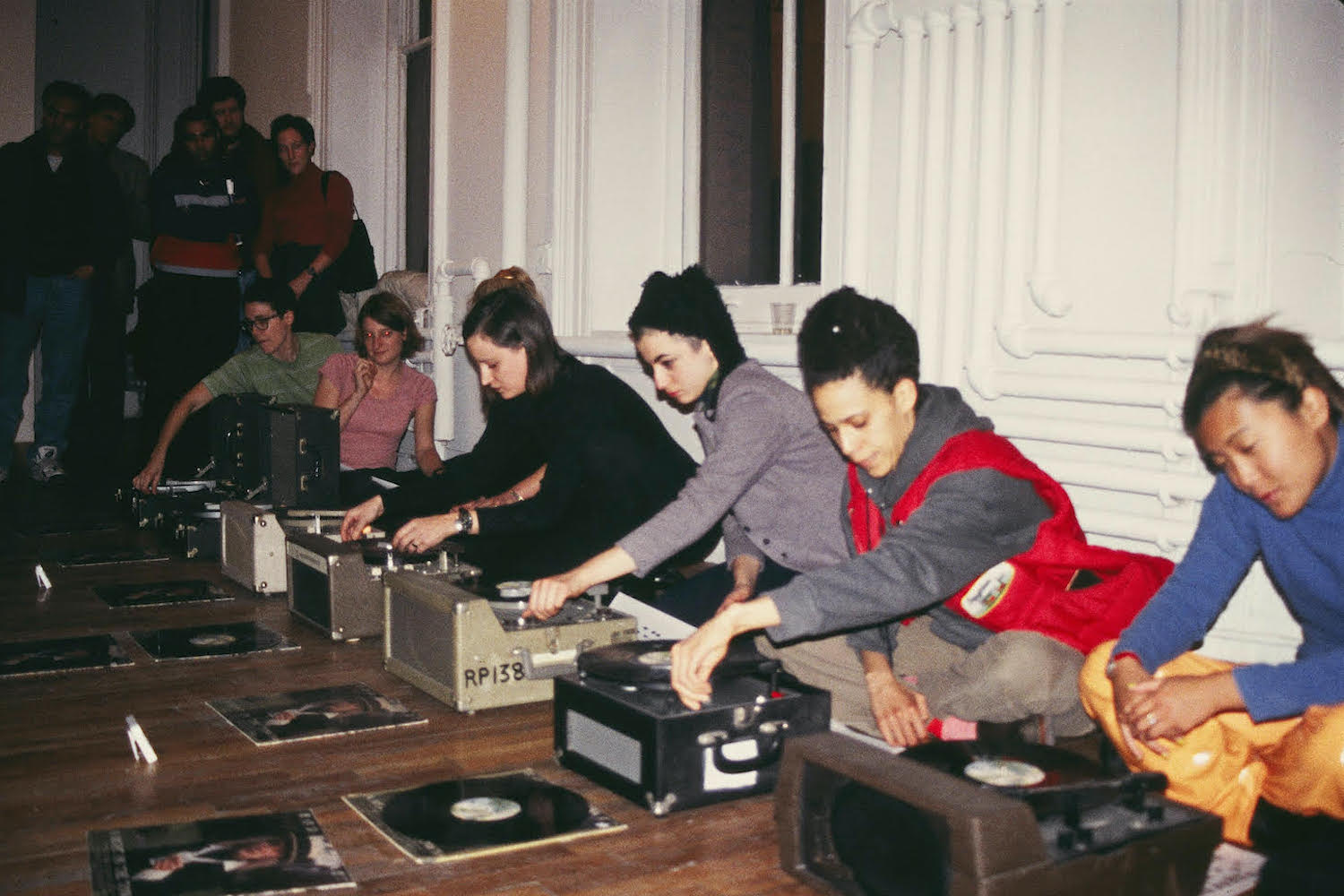 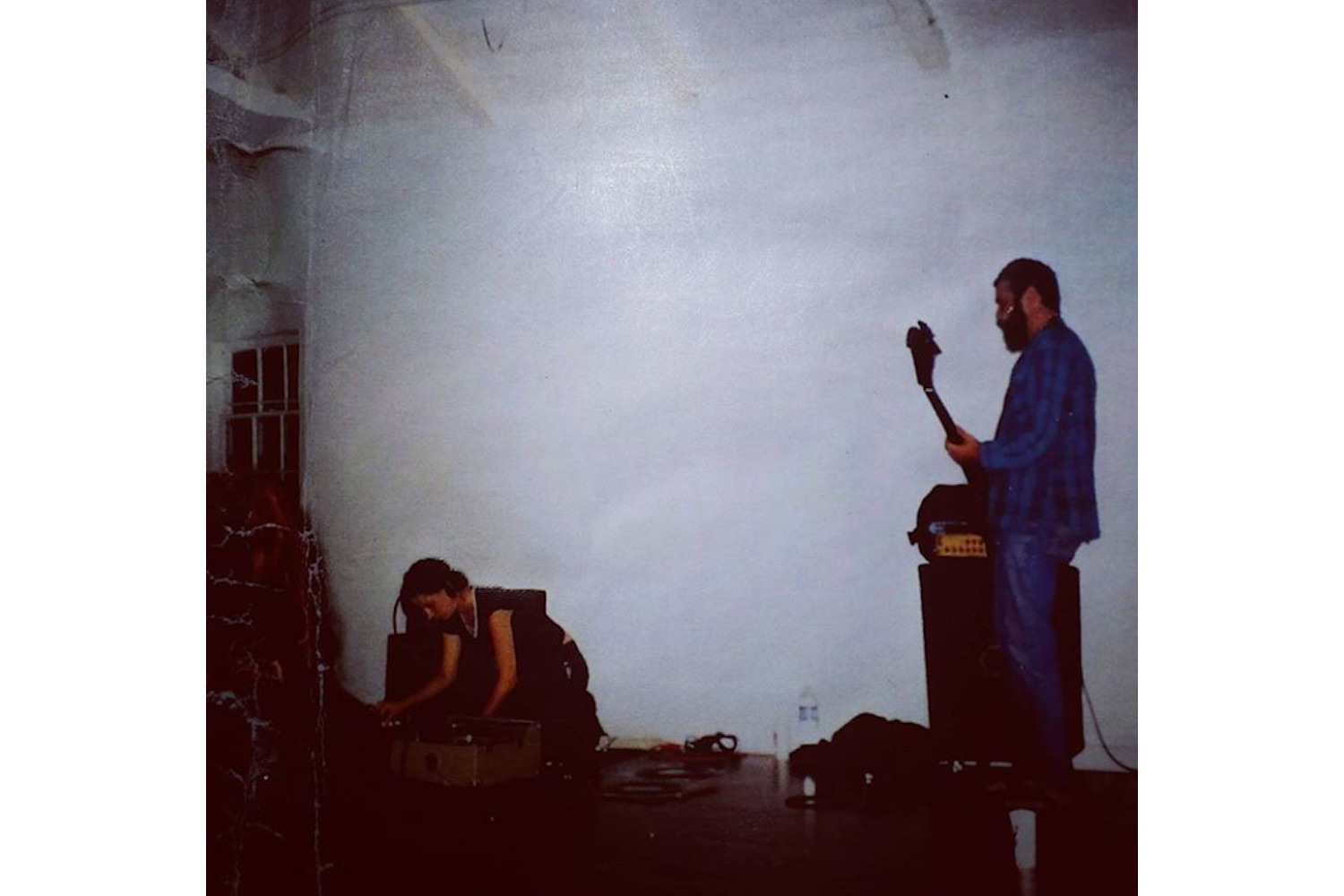 In July, Australia’s Room40 reissued two classic albums by US composer Marina Rosenfeld: theforestthegardenthesea (1999) and Joy of Fear (2005). The earlier record is the first “official” document of Rosenfeld’s evolving turntable practice. Here, scholar Fumi Okiji responds to the call of the B side, “theseatheforestthegarden.”

They’re all ear pressed up here against the plate, in the crackle, fire without flames, but lulling nonetheless.

Lullaby babies who should have come of age at the end of the century, always almost fallen asleep, but who need not fight to stay awake; addicted to a nothing song designed to sooth them into inaction. Lullabies never managed to teach them sleep — the societal somnambulance, to which the cradle song appears in service, came for them a quarter too late — but in their decommissioned state the berceuses became sweet treats that they repeat over each another in the absence of a responsible adult.

(The compromised state, misunderstood as want of ambition — perfectly captured by Tony Blair’s adoption of the earwig “Things Can Only Get Better”1 for his 1997 election campaign — was, rather, an inability (refusal, perhaps) to dream when painfully aware that the only available aspirations are state-sanctioned and off-the-shelf. Aspirations endorsed for their capacity to give the appearance of maximum reform while effecting no, little, or so-slow structural change. For all its attempts to hack the opacity of subcultures with a cynical yet embarrassingly unironic appeal to the sardonic cool of late-century youth (Clinton on sax, upturned collar and shades, and Blair leaning against a pub bar strumming a Stratocaster, were dead giveaways), the underlying message of center-left mid-90s governance was “cut your hair and get a job.”2 It is not that those who should have come of age around then had failed to earn the political imagination they had inherited from the 1960s, as Goethe might have liked to read them. Their disillusionment was and is well placed. Their sagacious grasp of the limited scope of the dreams they could not and cannot have, developed an inertia not synonymous to the sleepwalk of their elders but, devastatingly, in too many ways compatible with it. They are just too tired (of it all) to act out, and so wander through life, quite awake but blurry eyed, as disgusted by the older sleep-induced acquiescence as they are by their own exhausted and resigned refusal.)

Tired and lopsided, babies who arrived a third too soon, who could not access the incubation that sleep provides, wandering ill-proportioned fetuses, all ear.3 They try to send themselves — those voices of the ’90s, voices that swing between euphonious and fucked — to sleep, secure in the lullaby’s ultimate obsolescence. Confident they will not slumber, they enjoy it. It is not remedy but recreation. They sing over one other, smoothing melodies in the most dryadic tones, only to hear the approaching hypnagogia shredded by demonic abrasion come the chorus, bridge, or next track.4 Lithium Lilith. This is the character of their particular brand of limbo. Their proprioceptive kink, a kinesthetic affliction. Rocking between the bitter and sweet like a microphone swung over a speaker, “trying not to be sick again, […] holding on for dear life.”5 Swinging in and out of screech and feedback. They pendulum the bitter and sweet, and make no progress, just sonic generation, extinguishing insurgent flames. Their revolutionary tendencies are mulishly fanned to extinction. 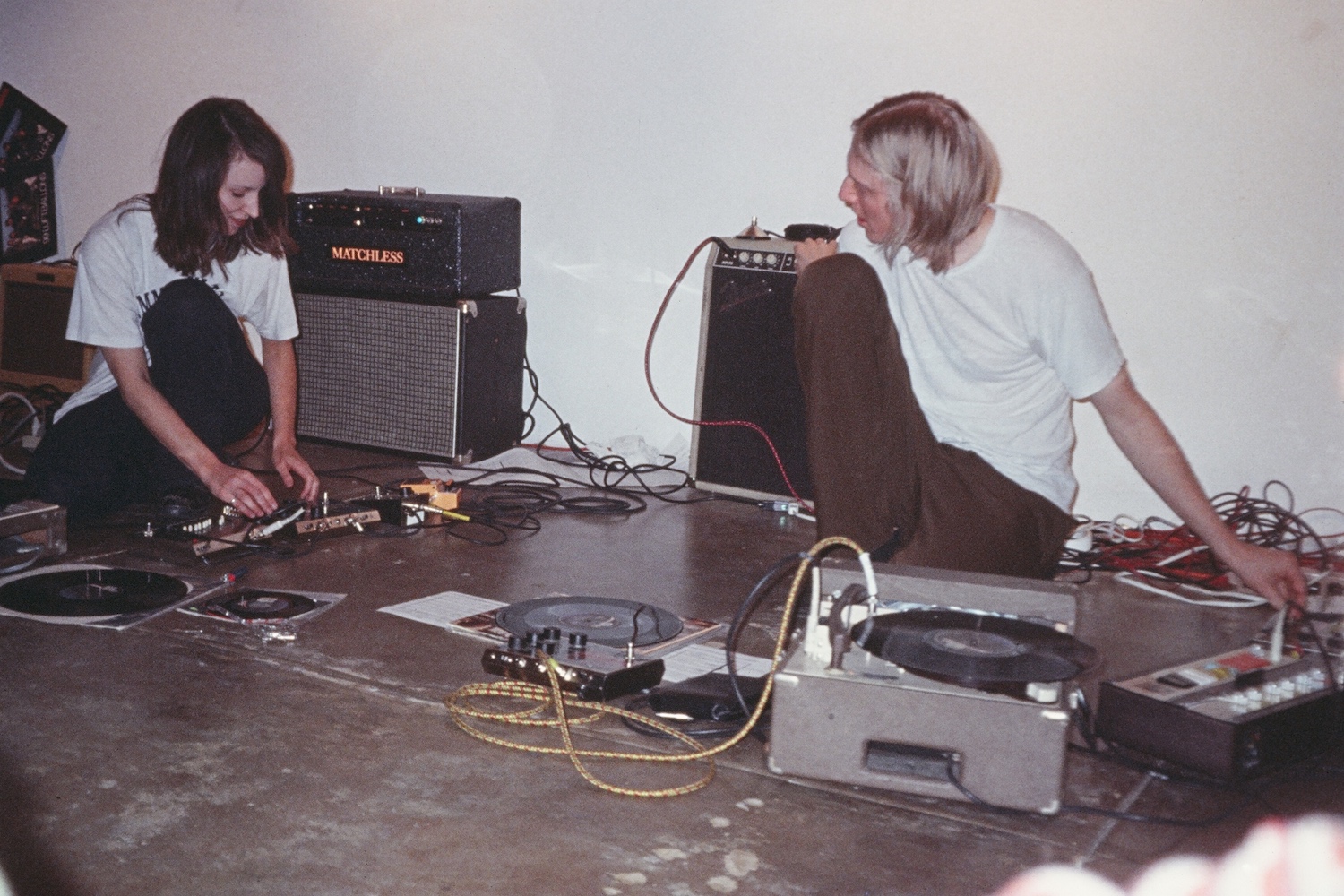 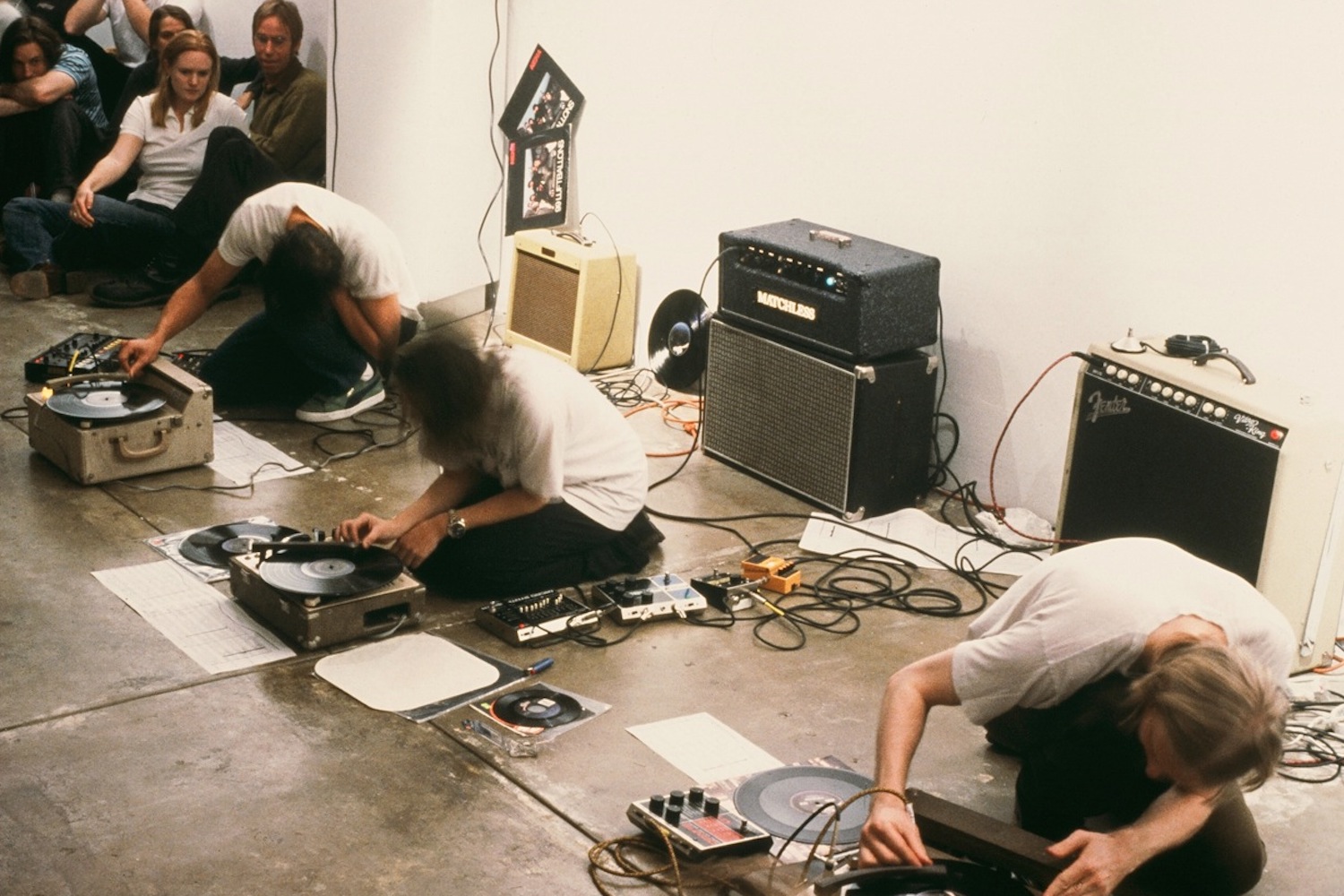 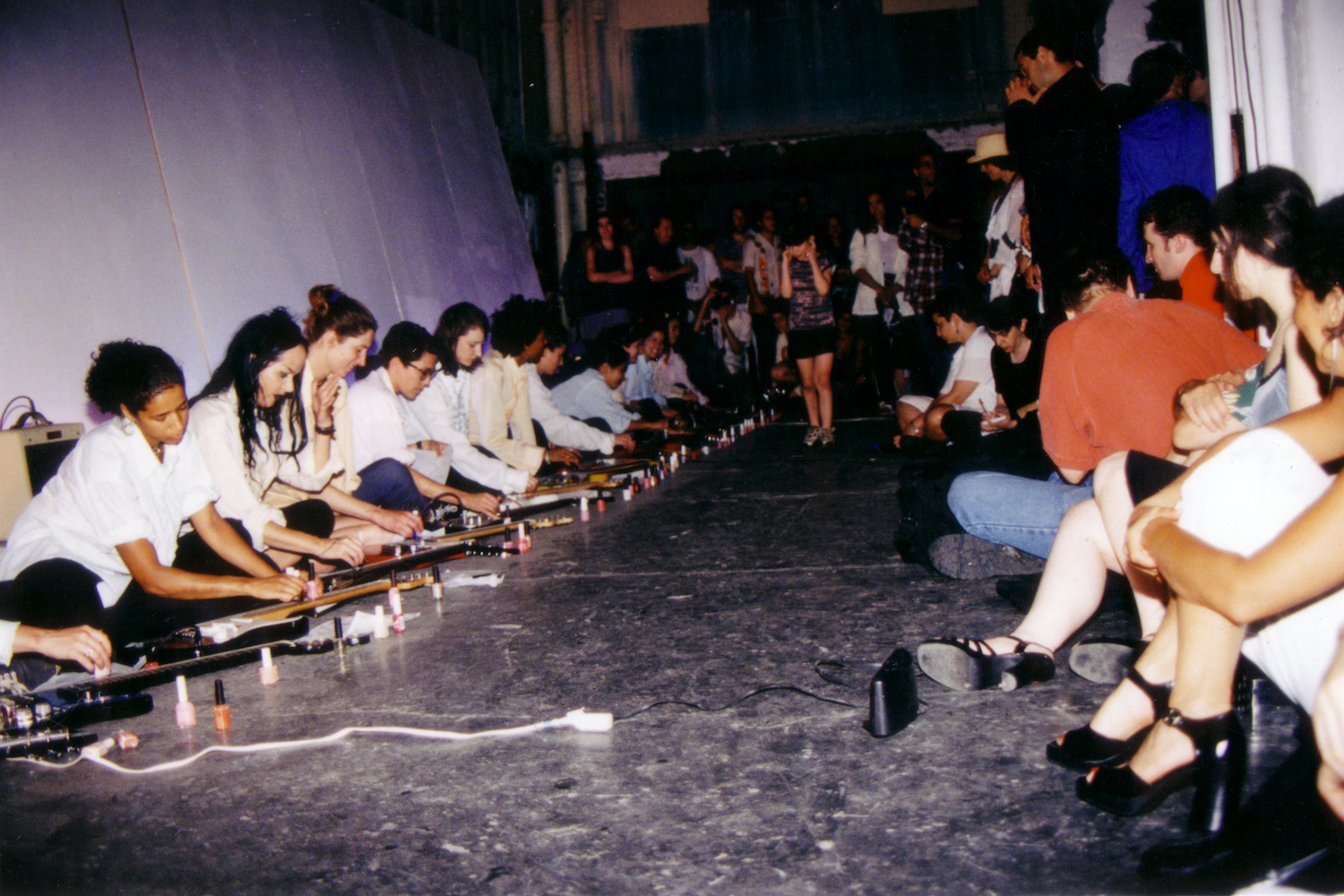 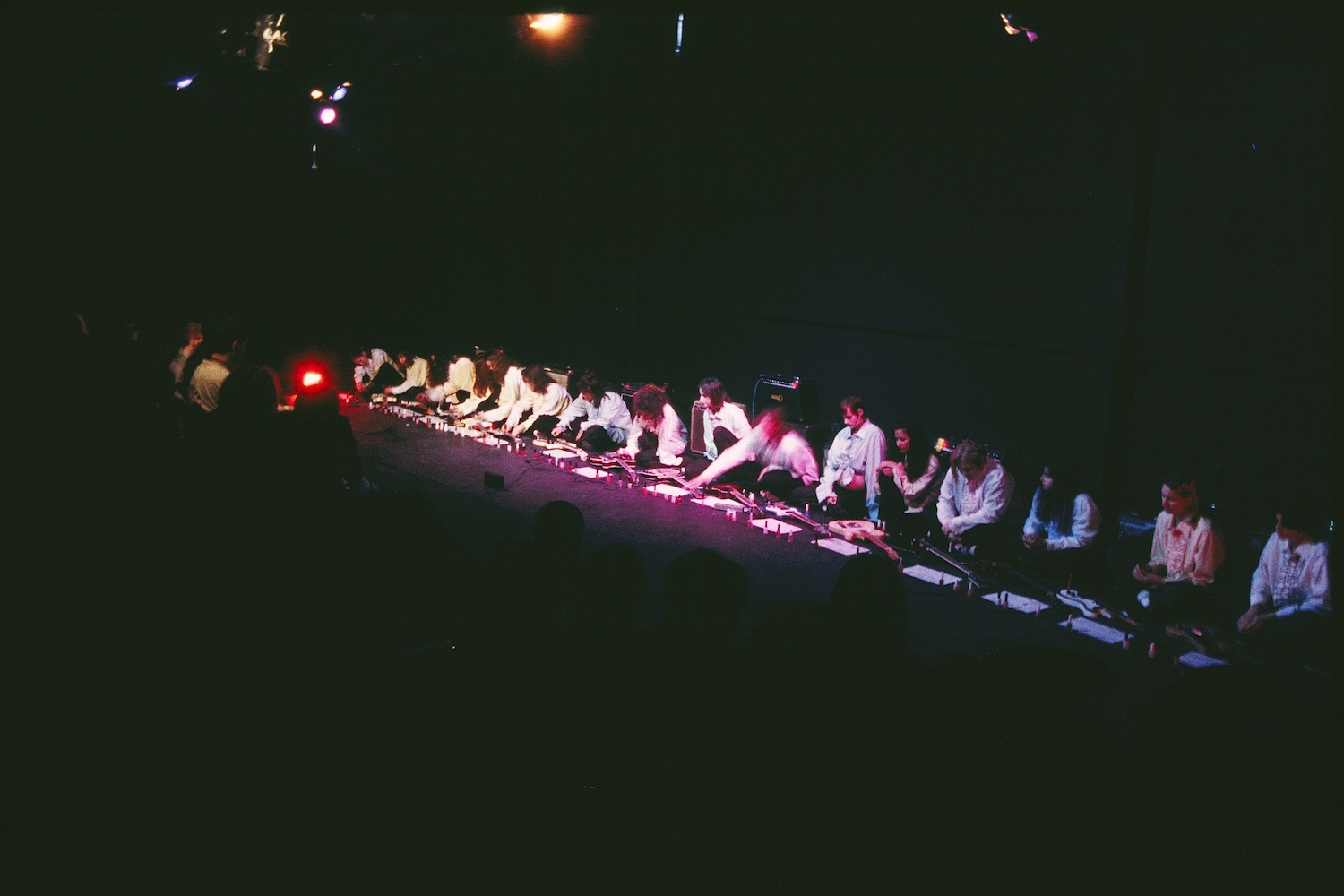 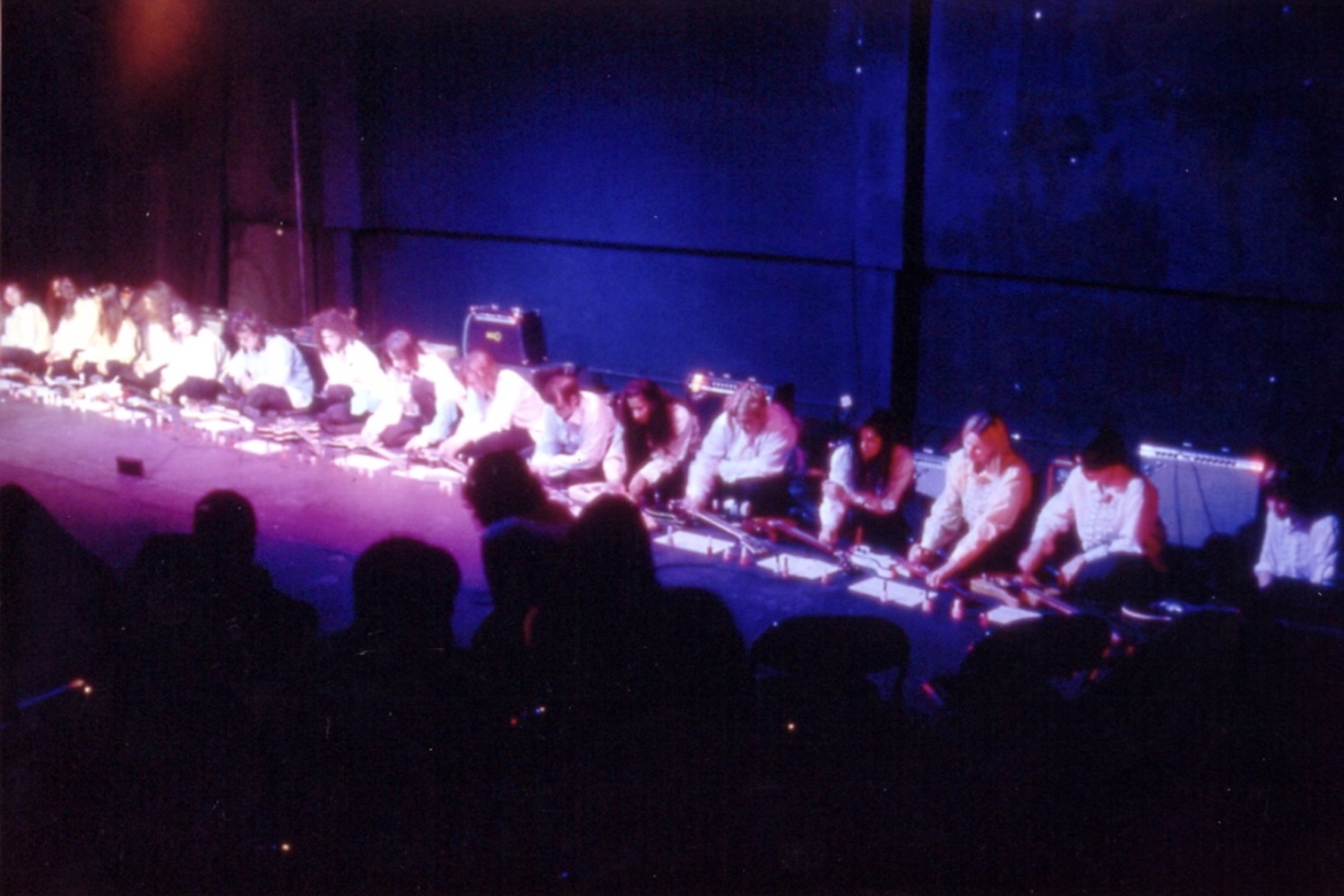 A lullaby sung for babies who should have come of age in the 1990s. Marina Rosenfeld’s “theseatheforestthegarden” sings, but from across a bay with its back to us. Its voice lands as thin, ethereal but inimitable, spray. It is the stuff that gets lost when I attempt to grasp the voices’ grain, work up the significance of their words, evangelize their empathy, account for the bouts of aggression. “theseatheforestthegarden” tells something (and actively says nothing) of their predicament. Rosenfeld tells only the salt of the voice. The salt of its lexicon. Season of grain. Of its cavities. And sea-breeze breath. Tart on their grazes. Song without tongue and lip and diaphragm and chest. Voice disembodied, pulled from lungs. Of the sonic extracted from the verbal. And grit left after grammar, form, timbre have been accounted for. Lalangue, private first “language.” Essential no-sense, (but) nothing of substance, only the most disposable of material to repeat to each other. “When speech fails, jouissance appears,” which might explain the bitter and the sweet.6 Might explain the piece’s something more, and less. The something not-there, in excess.

The naiveté is forced, of course. The chorus of opaque voices staged. The loss of thread of any plausible narrative, the smothering lallation, erosive crash of sea against rock, “the noise,” are anti-anti-mythological rather than a fall back into innocence.7

The (in)formal experiment that is “theseastheforestthegarden” is a shaking of the rational that presents as myth, but in its utter self-awareness (the piece speaking from beyond the acute spiritualization of the musical tradition with which Rosenfeld is intimate) is not truly born out of that anachronistic no-past. It puts to mind the contortive play, the epic naiveté, that Adorno performs in his interpretation of The Odyssey, that he projects onto the genre as its inherent contradiction rather than his own — myth conjured in order that it be summarily dismissed by the enlightened narrativity, which is also to say the rationality, of the epic.8 However, in a counter-Homeric move, writing beyond the (supposed) close of history, at the journey toward (aborted) freedom’s end, at the millennium’s tail, Rosenfeld refracts groundhog days posing as history-in-the-making through operatic land- and seascapes. Swaying in musique informelle, she takes the risk of formal adventure, littering the seas, forests, and gardens of a near-dream state with dismembered parts of voice and song that further disintegrate on impact. What remains are mere notions, mere slips, of a tongue, lips, and breath, without their song; the scattering of the notions around the absent song, constellate in its absence; alone together again, without it; disconsolate in the absentee company; together, the nothing there, or, rather, alone together; the salt and nothing else.

Fumi Okiji is an assistant professor in rhetoric at University of California, Berkeley. She arrived at the academy by way of the London jazz scene, in which she took an active part as a vocalist and improvisor. Okiji’s book Jazz as Critique: Adorno and Black Expression Revisited was recently published by Stanford University Press.

1 “Things Can Only Get Better,” released by D:Ream (1993). Not to be confused with Howard Jones’s synth-pop classic of the same name.

2 From the bridge climax of Pulp’s “Common People” from the 1995 album <em>Different Class</em>. This misunderstood not-quite-serious/not-quite-tongue-in-cheek cool was the most accessible of a grouping of aesthetics that included mundane melancholia and the tortuous swing between the dulcet and acerbic sketched here.

3 Here, I have in mind the image Friedrich Nietzsche gives us of a man dwarfed by his oversized ear in Thus Spake Zarathustra.

4 There are many examples of this pendulum in nineties indie-mainstream crossover. Kurt Cobain’s vocals on Nirvana’s “Lithium” spring to mind due in part, no doubt, to the title’s alliterative affinity to Lilith, the mythological figure associated with cot death. The genre of lullaby is directed toward her appeasement or neuter. Bjork’s 1995 album Post, and Tricky and Martina Topley-Bird’s duet “Hell is ’Round the Corner” from Maxinquaye released the same year, are another two manifestations of this swing.

5 From “For Tomorrow,” Modern Life is Rubbish, Blur (1993). The image is from Camille Norment’s installation Lull-So-Ro (2015). https://www.norment.net/work/objects-installations-ind/lull-So-Ro/

8 This is very much indebted to James Porter’s brilliant reading of Adorno’s “On Epic Naiveté.” Consider: “Whenever language discovers its non-rational and non-verbal resources and becomes imagistic, object-oriented, and impossible to translate back into language again, whenever it becomes, in his words, ‘stupid’ and ‘dumb,’ it ceases to communicate, to be ‘fungible’ (offering exchangeable information), and instead becomes mute and opaque, itself object-like” (p. 99). 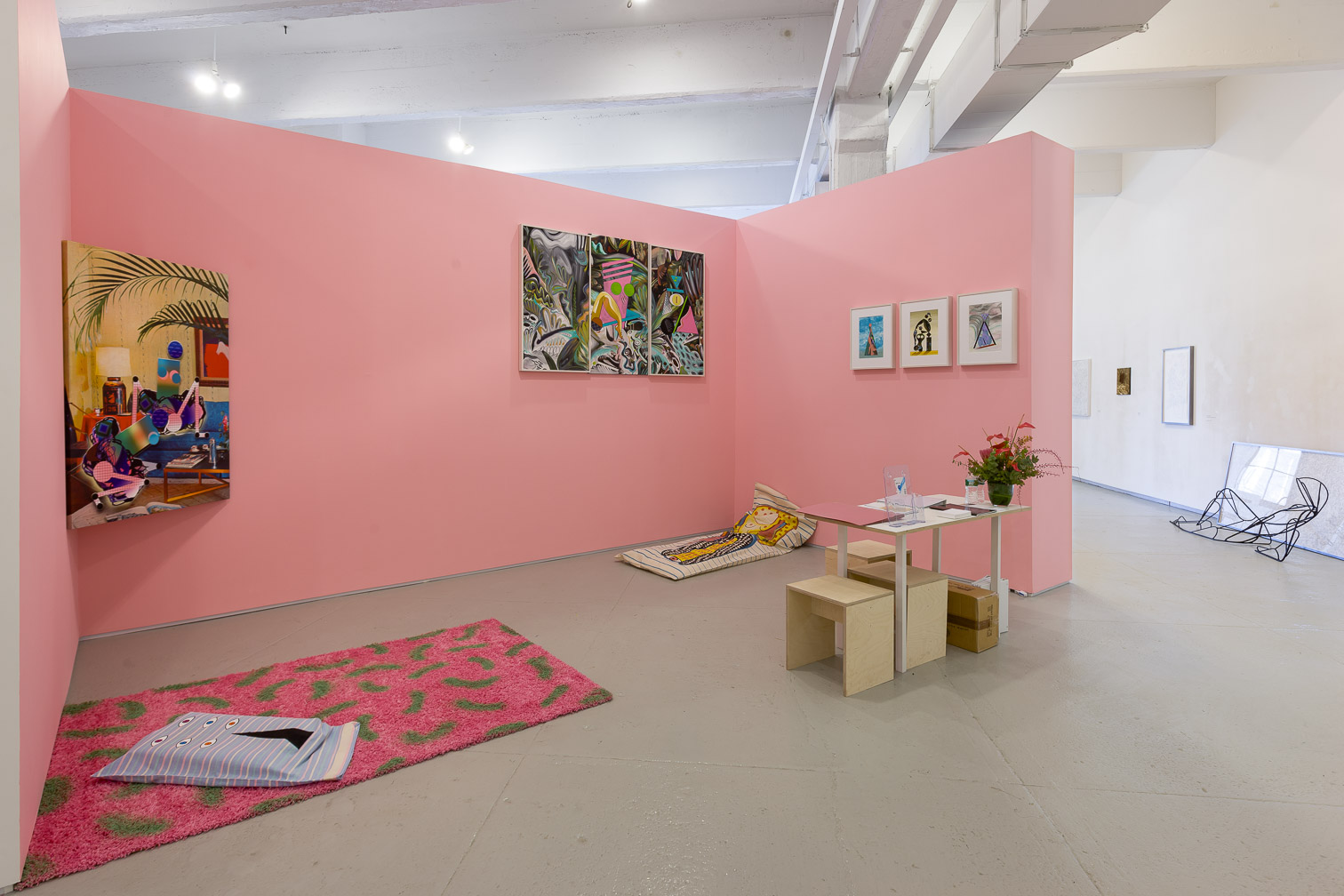 How many art fairs can you pack into a week? In New York this past week there were at least… 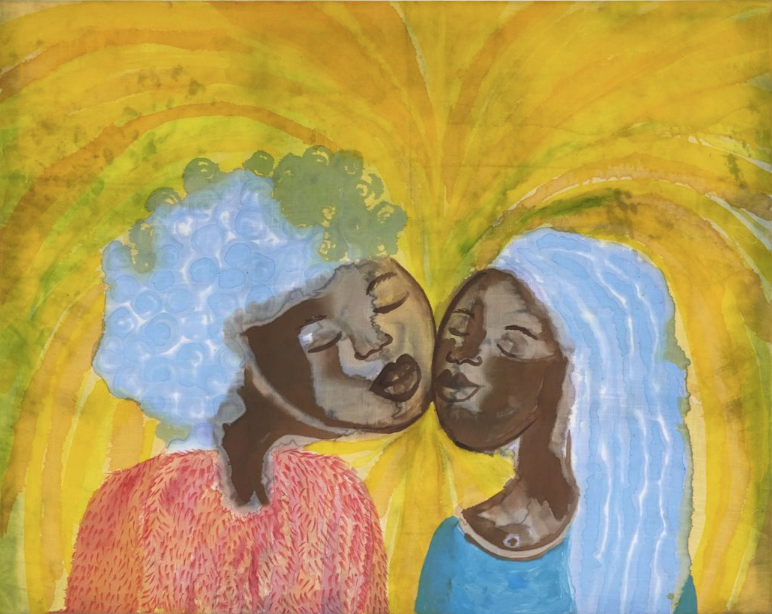