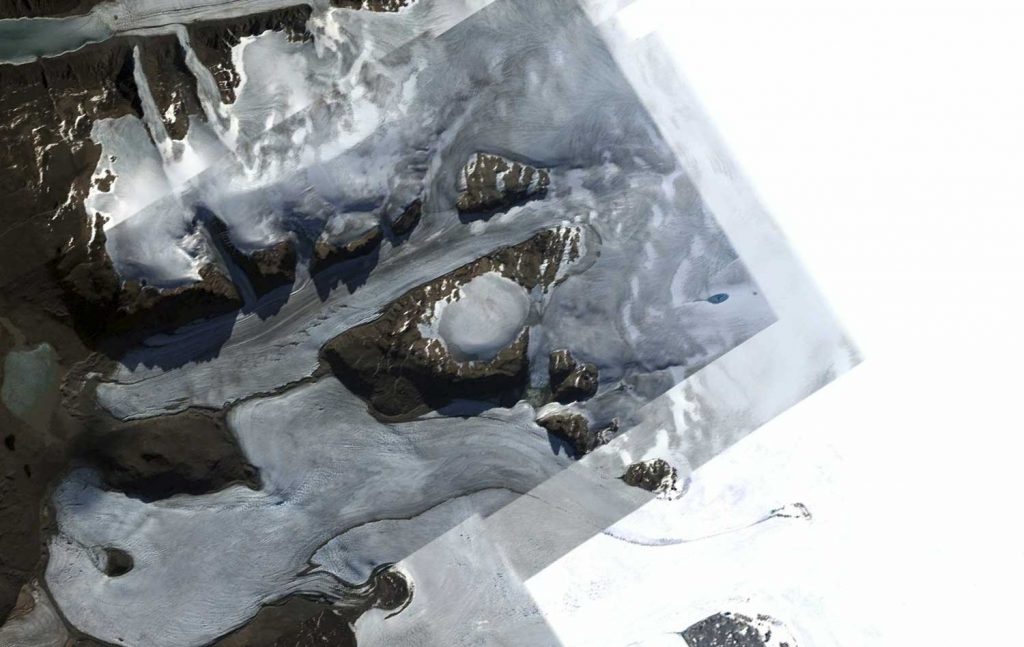 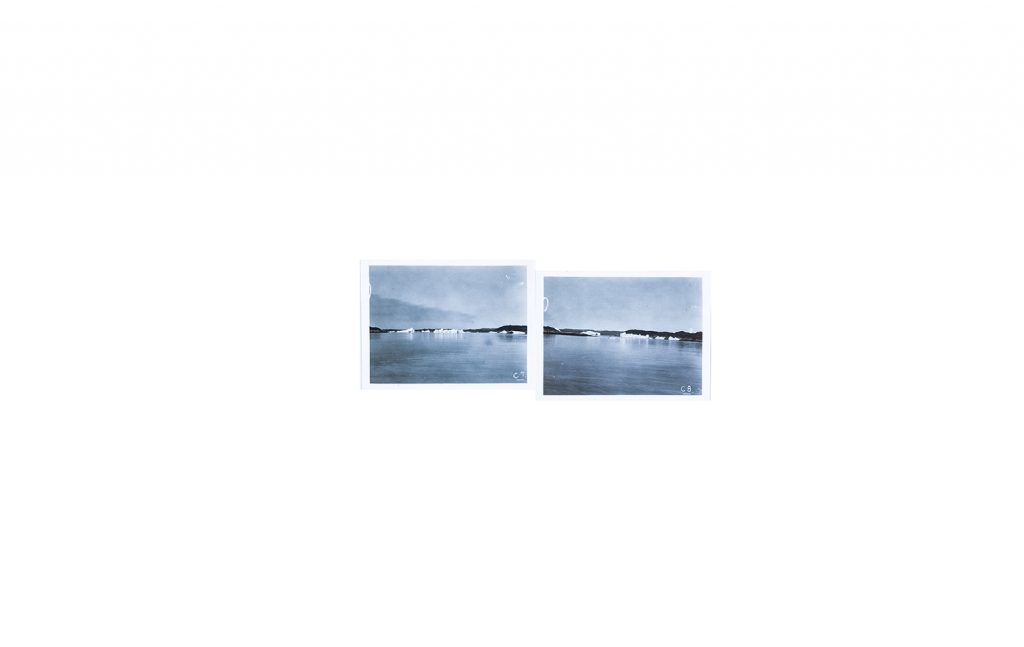 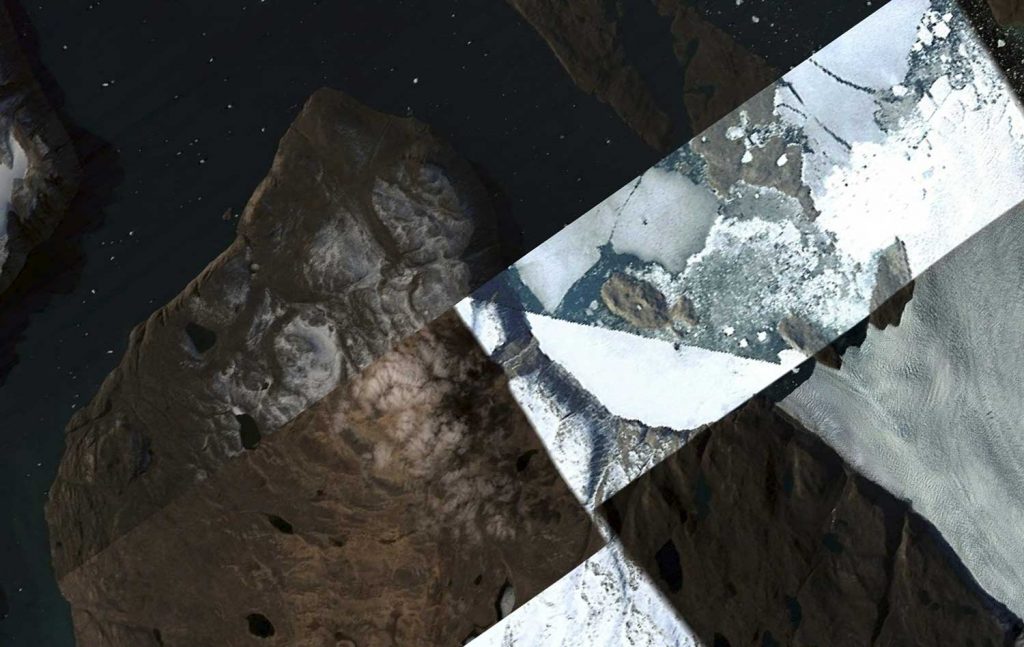 “Project Iceworm” was a mid-twentieth-century mission undertaken — then abandoned — by the U.S. military to test nuclear missiles in the Arctic. Rather than returning the base to clean conditions, the toxic settlement was left “as is,” with the assumption that ice growths would bury its harmful materials; instead, global warming has caused the ice to melt faster than new layers can offset it. The noxious site could resurface within decades, releasing all of its toxic waste into the marine environment.

Project Iceworm is now also the name of a contemporary photographic and research project that explores themes of climate change and sociopolitical negligence. Swiss photographer Anastasia Mityukova addresses the urgent and chilling threats that lay in wait from dormant but eminently destructive histories. Mityukova studied photography at ECAL (École cantonale d’art de Lausanne) and graduated in 2018; in “Project Iceworm,” what began as her final project is now a long-term and engagé commitment. An installation, featuring a selection of her images, is currently on view at Festivals Circulation(s) in Paris through July 21. (The project was previously shown under a different guise at the Folkwang.) Her series is a meticulous and thorough investigation of declassified U.S. army documents, satellite maps, and social-media images that she reframed, resized, and re-contextualized to make the phenomenon digestible through visual mapping.
We spoke with Mityukova about why images can be more subversive than facts, her goals as a citizen activist, and how to make an impact through — or beyond — art.

Sarah Moroz: How did hear about this and then ultimately decide it was a subject you were going to invest in?
Anastasia Mityukova: Since I was a child, I was obsessed with travelers; my parents used to read me stories about them. I was obsessed with missions in the Arctic. I made one project about Robert Peary, the first person to reach the North Pole in 1909 — though he actually faked the fact that he arrived. I particularly liked Jean Malaurie, a French anthropologist, ethnographer, and explorer who documented the Inuit way of life. One of his most famous works was about Thule, and there was a chapter at the end of his research about the construction of an American base. He knew little about it apart from the fact that a huge budget was involved. I remembered this story and recently — in December 2018 — I stumbled upon an article, a geographical survey, by sociologists from universities in Freiburg and Copenhagen. They wrote about the remains of Project Iceworm, a base under the ice. PCBs, chemical and nuclear materials risk rising up because of climate change, which would threaten the ecosystem of the Inuits. So it’s a long story, from my childhood to right now.

SM: There’s a personal aspect then.
AM: It’s something that matters to me as a young person. Generally speaking, we’re all affected by climate change. I think that there is a big picture of what’s going on through small stories. We have to find solutions to these small problems. Nobody wants to take care of Project Iceworm: neither the Danish government nor the American government, so it’s a really strange political situation. There was something obsessive about this project for me: since the base doesn’t exist anymore, I wanted to find all the documents and proof of existence. There is no archive. I started to collect as many images as I could on the Internet, and compiled them in a huge six-hundred-page book. It’s a small encyclopedia, actually. It’s a long process, and I’m still working on this now. I’m willing to do an open-source archive that everyone could access in the future. This here is the start: gathering all the material. All my documents speak to each other about the landscape, about climate change, about the destruction of the environment. For me, it’s also a way to think about how you can appropriate all these images and talk about a topic that is important: that’s my process. Every time I found images or a document, I put it in a sort of classical form of photography — cyanotype, collage, leporello — made with modern technology. I collect and recompose archives to give my own opinion and own view of the problem.

SM: Given this invisibility of the core idea, it’s interesting to use a visual medium to move the conversation forward. How does one depict something intangible?
AM: There are many ways to display the problems. At Circulation(s), there is not a single picture that I’ve “made” myself: it’s all found and gathered material. I work on a reinterpretation of the images to contextualize them. When I was looking for this base, I also stumbled upon the image of a plane crash; I started to investigate that. It was another story that had happened near Thule Air Base. It was a crash of a B-52 plane that was transporting four nuclear weapons. When I saw the image, what struck me is that, first of all, it was a re-composition of two images. The scale… you cannot fit the twenty-kilometer mark in your head when you’ve seen the picture, because it was a small archival print that was probably ten by five centimeters. I was thinking: how I could show the importance of this? I created the image in a huge format in the exhibition: it’s two by 1.7 meters, composed of forty-nine parts. It’s reconstructed with a cyanotype process: a chemical procedure you put under sunlight, so the radiation shows the image. I enlarged because it’s a huge issue.

SM: What else did you find out?
AM: In this plane crash, three bombs exploded; one bomb sunk into the ocean and wasn’t found — is still not found. The mess was cleaned up by American soldiers, but lots of Inuits suffered health problems afterwards and filed procedures in court to get them covered. But nobody wanted to acknowledge that there was any link. The Americans said there wasn’t enough plutonium to affect anyone, but other reports show that the Inuits weren’t protected enough from the radiation. For me, taking a tiny archival image and blowing it up, showing its impact and its symbolism, is a radical way to speak about an image and put it in context.

SM: What about the other components on display?
AM: To the left of this large cyanotype are images of landscapes I found in the national archives, made near Thule Air Base a long time ago; the photographer is unknown. Separately, I found numbered files that, if you put them all together, create this huge photograph of the landscape: a photograph of the coast of Greenland made at ten-meter intervals. So at the beginning of the twentieth century, someone from the American government was planning on doing something there. This is speculative. The only fact is it was a mission of the U.S. Army. The information I could find is the placement of where the images were made, because there were coordinates: it was the coast of the Thule Air Base. In the early images, before the damage, you can see Inuits still fishing in a traditional way and there are huge floating icebergs and the landscape is very preserved. I retraced all these coordinates of the coast on Google Earth… and I found a strange thing. Since Google cannot do satellite photographs of Greenland at one time — because it’s a huge territory — the satellites mix up dates together as one image. It’s a collage of different seasons: summer and winter at the same time. When you zoom in, it’s a strange patchwork. For me, it’s a symbol of how technology can sometimes say something about our future and the past, since these images were taken at different times over the past twenty years. It was interesting to reprint the same place and show that there is something going on in the territories. It is a way to talk about climate change: we can see the things that are happening really precisely. But we still don’t consider them seriously.

SM: Viewing the series “Project Iceworm” provides new awareness, but is this also a call to action? Do you consider yourself an activist?
AM: For me it’s an activist project. It’s a warning; it’s not just art. The way I express my political views and inspiration is in visual form, so for me it’s important to talk about these matters in a visual way. As a photographer, you should have an opinion. The warnings — we all know them, we all understand the problem. But nobody is willing to make big changes. Visual impact is sometimes more important than facts. I’m working with both — I provide facts and also images, but sometimes to see a crash or something destroyed is more impactful than just hearing about it.

SM: Since this is the first part of an ongoing project, what are the next steps?
AM: will travel to the Inuit village north of the American base. The aim for this project is also to include people that are suffering from the consequences of climate change, see how this American base is impacting their life. It’s a different form of research. Few people are aware of this, except glaciologists. How are all these problems from our past affecting our future? And now, what damage control can we do? It’s important to talk about the future: we should find answers to what happened and try to fix what we can fix right now. It’s not a huge budget to clean up this particular mess.

SM: How do people react? What do they think can and should be done?
AM: For now, this is a really young project — it’s my diploma work. Next September, I will work with the University of Leiden, but other people are not quite involved yet. I will meet and talk to the local Inuit population, and collect their expectations. From there I can talk about it in Europe, and speak for them, in a way. It would be a way to communicate about the project.

SM: What other measures help spread the word?
AM: The research will be available in different forms: the exhibition, the book, online resources. The problem with artwork is if you’re not famous enough, you’re not going to reach lot of people. We’ll reach people interested in contemporary art and photography, but I’m thinking about how to communicate through universities, literature, books — people who have a huge impact on these matters, like research anthropologists. The project has to be more mature to impact more people.

“Project Iceworm” by ANASTASIA MITYUKOVA is on view at Festival Circulation(s) in Paris until July 21, 2019.

SARAH MOROZ is a Franco-American journalist based in Paris.

“Travelers return from the city of Zirma with distinct memories: a blind black man shouting in the crowd, a lunatic…

The 5×5 Project recently opened in its second incarnation. This year the five selected curators include, Lance Fung, Shamim M.…