Upon ascending the escalator of the Palexpo complex, visitors to this edition of artgenève were greeted by a bright sea of suspended silk sheets, as if entering an exotic travel or esoterica fair. (The installation, A Laundry Woman (2000) by Kimsooja, came courtesy of the Musée d’art contemporain de Lyon). As an experience this wasn’t too far removed from any art fair as such, albeit in the case of artgenève it was still a fairly Eurocentric congregation, heavy on Swiss and French galleries big and small but with increasing presence of global players such as Perrotin, Hauser&Wirth, Pace, Marlborough and Gagosian, which has an outpost in the city.

For the Geneva crowd and clientele the gallery picked the late Chris Burden’s 40 Foot Stepped Skyscraper (2011) representing the so-called “Estate Show” section. Cold and glaring, the structure resembles a straightened-up—literally—Manhattan take on the Tatlin Tower, the erstwhile so-called “Monument to the Third International”, which similarly was only ever exhibited within a fair environment back in 1920, at the Soviet trade exhibition held inside the House of the Unions in Moscow. With pretty much everyone seated at the press lunch expressing a mix of exasperation and distaste for the weekly gilets jaunes demonstrations in nearby Paris, any correspondence between such monumental art-historical models however pretty quickly evaporated. 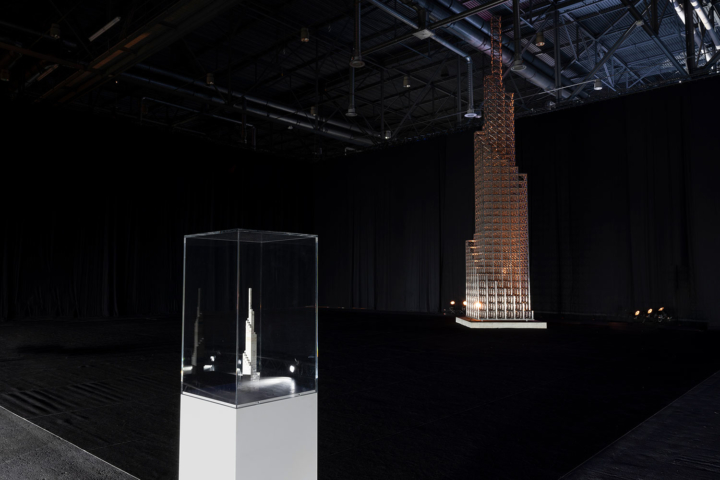 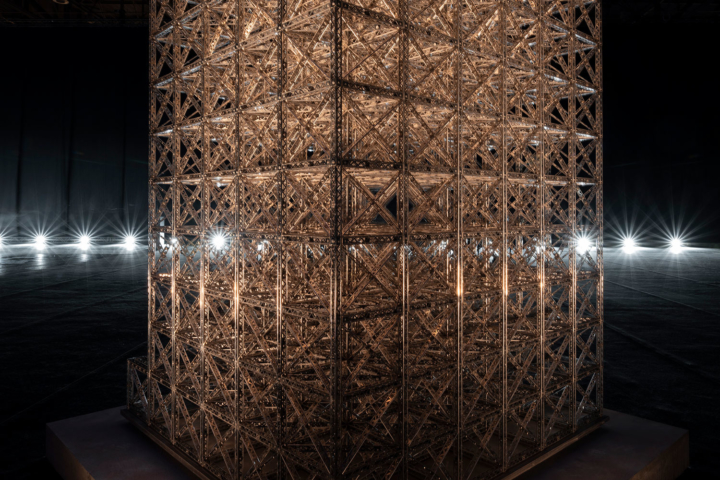 If there was a trend or theme to be discerned at the fair, it would have to be that of the animal and of organic mortality generally. At Exile, which only recently relocated to Vienna after many years in Berlin, Nschotschi Haslinger showed a floor piece, Unkentreff (2019), consisting of a campfire conference of multicolored ceramic toads. The relatively small booth proved to be one of the more intriguing presentations, juxtaposing this rather fantastic amphibian formation with low-pitched photographic archival works from the 1970s to early 1980s, such as the minimalist and performance artist Kazuko Miyamoto and documentation images by Gwenn Thomas capturing the dancer Steve Paxton choreographing an equally circular routine at The Kitchen back in 1975. Waldburger Wouters (from Brussels/Basel), which here teamed up with ShanghART, brought Mark Dion’s displaced looking Penguin sitting atop a crate, that ultimate token of the art business’s carbon foot print, while a solo presentation of Alex Hanimann by Geneva-based Skopia gallery comprised night-vision tinted shots of various wildlife, apparently all caught being Trapped (2017), as the series’ title suggests. Over at Galleria Continua, Carsten Höller showed a couple of his necro-aesthetic Birds photographs of finches while elsewhere I could spot Dion again, this time by way of a suite of stuffed Polar Bear prints. An art brutesque swan made from sea shell-like parts fully returned the fauna theme to artifice and kitsch proper. 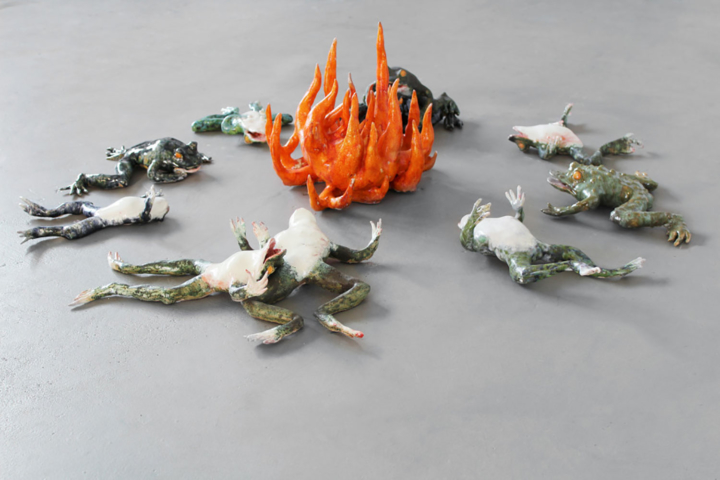 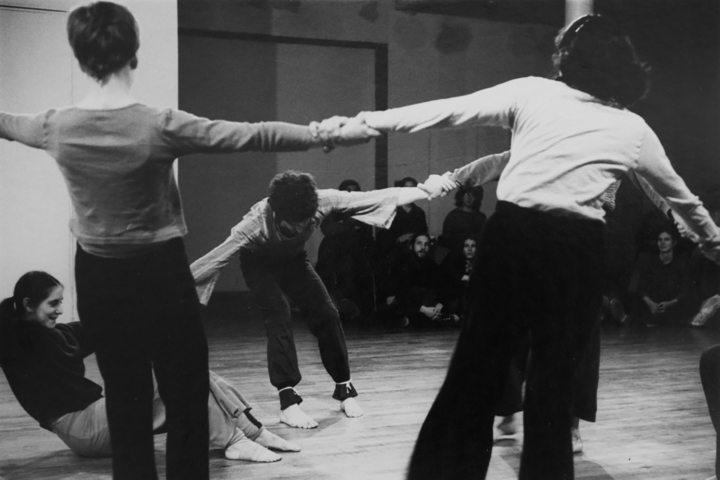 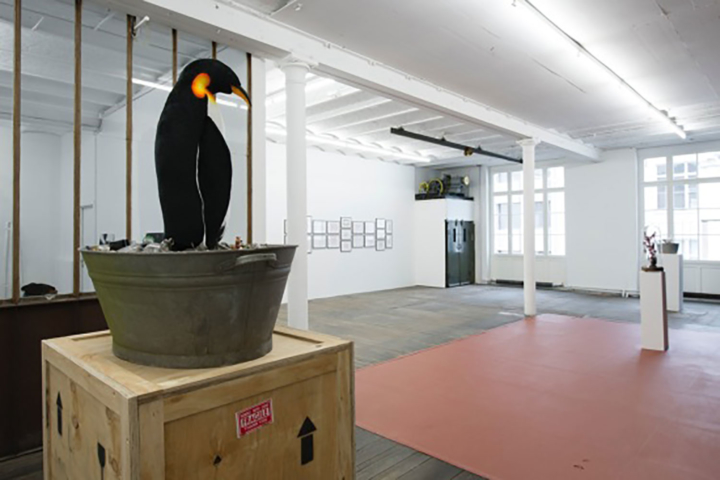 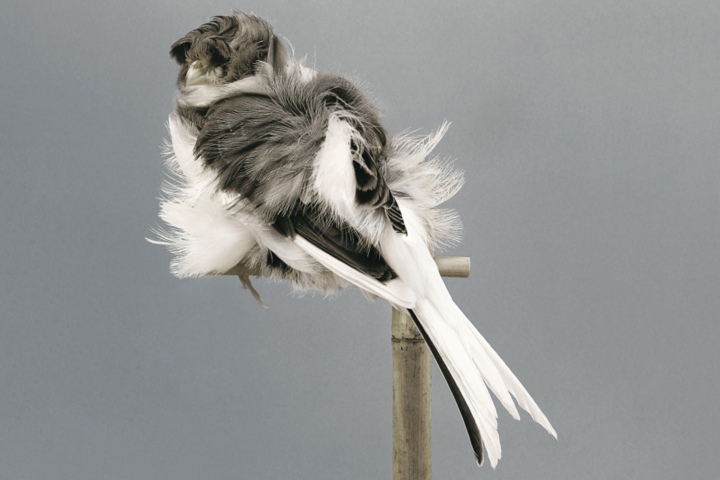 Either way, any such theme might merely speak to galleries’ considerations about what kinds of work to bring to a respective fair, which in Geneva seemed by and large to belong to the “safe” category. This also included, admittedly subjective, stand-outs like the stylishly aged, just so “feminine” textile and assemblage wall-works from the 1970s by the late Cuba-born artist Hessie (Carmen Lydia Đurić), at Arnaud Lefebvre (Paris), or the space-age-hued morph-scape canvases by the young American painter Sarah Slappey brought by Maria Bernheim. Jimmie Durham’s matter-of-fact “Core Sample from the European Parliamanent”, a broken-off cylindrical bit of Terrazzo concrete and scrap metal, originally and actually one of three components of the work Three Stones (1996, shown at Christiane König’s stand), served as a closing reminder of crumbling structures as well as the on-trend reinvestment in all things faded and distressed Nineties.