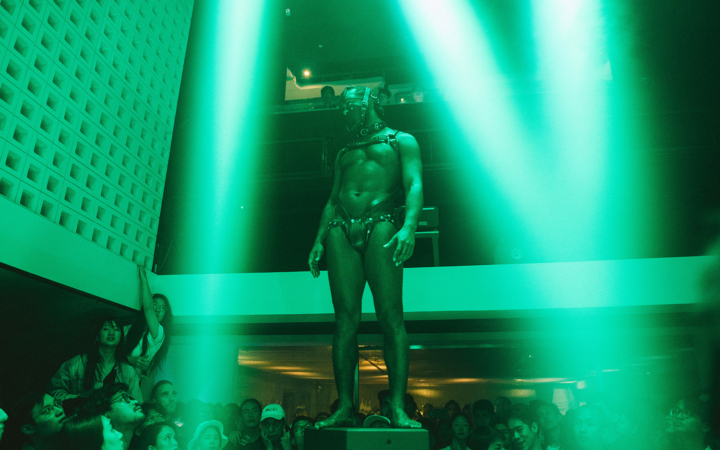 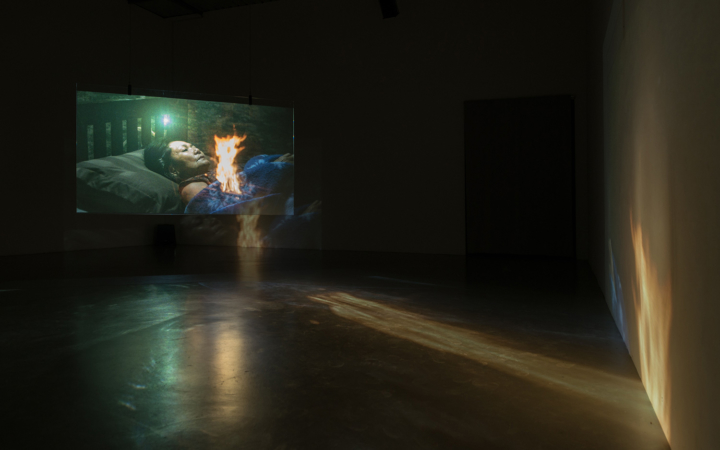 1
2
3
4
5
6
Apichatpong Weerasethakul, Blue. Courtesy of the artist and Ghost Foundation. 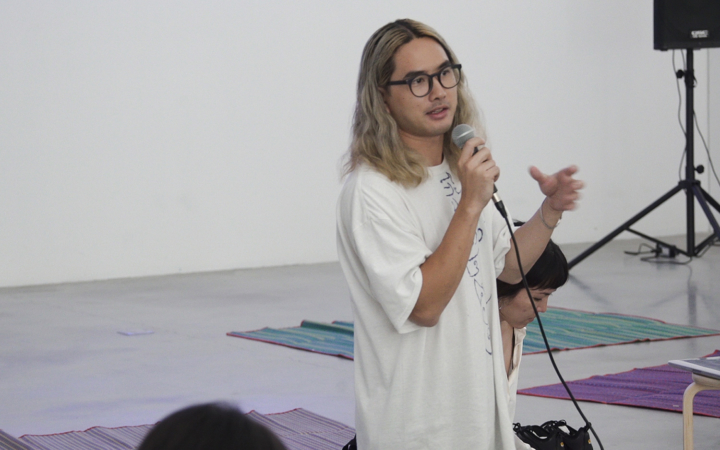 1
2
3
4
5
6
Korakrit Arunanondchai. Courtesy of the artist and Ghost Foundation. 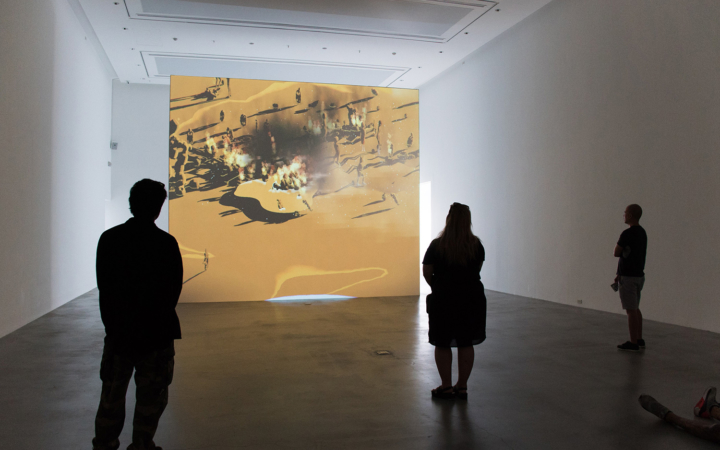 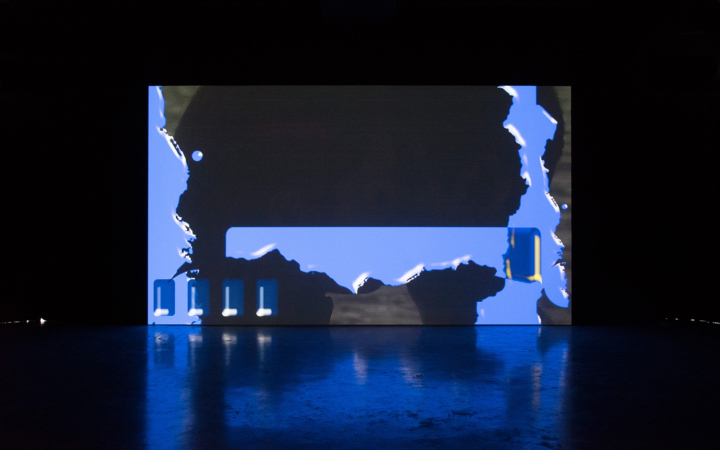 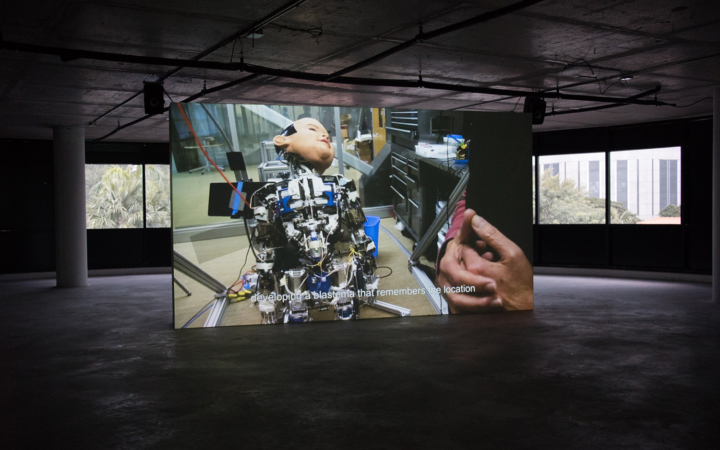 Instead of wall text, the inaugural Ghost:2561 — a new video and performance triennial in Bangkok curated by New York–based artist Korakrit Arunanondchai — deployed a team of human “storytellers” to talk about each work.

In the month preceding the October 11 launch, these storytellers attended workshops, at which they were introduced to some of the participating artists and deconstructed various texts — including essays by Hito Steyerl and Édouard Glissant, and a tale by the nineteenth-century Thai poet Sunthorn Phu — from an ontological perspective. On completion, they were then tasked with serving as “neither exhibition guides or didactic machines” but enablers of a discursive structure. “They are mediums for the work,” explained Korakrit, standing amid the burnished teak and Burmese nat (spirit) statues of the city’s famous Jim Thompson House, and as Jon Wang’s You Belong two Me (2018), a site-specific commission, played out on two screens. Here, at this top Bangkok attraction, the tour guides who work there did the explaining, but elsewhere visitors might encounter a storyteller upon exiting a video installation. Sometimes these interactions led nowhere, but other times conversations that helped guide the viewer down a path of meaning were struck.

Ghost:2561’s storytellers were not the only mediums in attendance. From the eerie promotional video to Korakrit’s curatorial letter (“Dear Ghost, Welcome to my body…”) and the performers (Boychild, Ashland Mines and Thanapol Virulakul), everybody and everything channeled something during this two-week event. Some of the ten venues even took on a spectral quality. This was most evident at Rirkrit Tiravanija’s Gallery Ver, within the N22 warehouse gallery enclave, where flames gently kissed the walls as Apichatpong Weerasethakul’s phantasmagoric short Blue (2018) crackled into life. Next door, a more discombobulating immersiveness was achieved by Lumapid Sa Akin, Paraiso (Come to Me, Paradise, 2016), Stephanie Comilang’s sci-fi-inflected documentary about three Filipina migrant workers. In a room lined with cardboard boxes, three screens concurrently played mobile-phone footage of them spending Sundays, their only day off, socializing amid cardboard cities in downtown Hong Kong. “I am the transmitter… they are stored in my cache,” muttered the deadpan narrator, a drone voiced by the artist’s mother, as images gamboled frenetically around the room.

Just as Korakrit hoped his storytellers would smooth the introduction of video art, most of it theory-driven and hailing from outside Thailand, to Thai audiences, Ghost:2561’s animist conceit was intended to foster comprehension and engagement with new modes of narrative. “I wanted to bring things together using a metaphor that felt local and somehow naturalized,” he told Garage magazine before the opening. Often this metaphor was quickly effaced, the dialogue at talks stumbling into the realms of structural critique, object-based ontology, and Derridean concepts. At one of three curated screenings, for example, curator Aily Nash spoke about the hauntology of cinema, namely its temporal and spatial boundlessness, and introduced three films, including Thai director Anocha Suwichakornpong’s Mundane History (2009), that navigate embodied and disembodied experiences, and physical and psychic spaces. A few hours before, at the Thailand Creative & Design Center, Monica Narula from the Delhi-based Raqs Media Collective and Amalia Jyran gave an elegiac lecture-performance that, through fragments of film, images, and letters, seemed to both bend time and long for a future that never arrived.

All the work, Korakrit explained, was about “renegotiating our relationships with data, whatever that data is,” and, while the tone varied from snarky to contemplative, it was hard to disagree — slick attempts to parse the contemporary condition, to reveal the hidden and shadowy, were everywhere you looked. The prospect of data as people, for example, was brought to a heightened level of consciousness by Ian Cheng’s Emissary Sunsets the Self (2017): a towering AI simulation wherein primitive races compete to assert their authority in a mutating dystopic ecosystem. Also at Bangkok CityCity gallery (the co-founder of which, Akapol Sudasna, co-initiated Ghost:2561), Jon Rafman’s Deluge (2018) found visitors queuing to experience a serpentine VR landscape that felt like a portent of what may come. Other dense, rewarding works included a send-up of modern life’s free-associative onslaught of imagery knitted together out of Hokusai Tumblr memes, spoof weather reports, and Bruce Lee sound-bites (Hito Steyerl’s Liquidity Inc, first shown at London’s ICA back in 2014); an unsettling fever dream from a posthuman future, the narrator of which pondered “the weight of a soul, measured in terrabytes” (Metahaven’s Information Skies, 2017); and a transmigratory romp through the evolution of the spiral motif that culminates with an advert for a rejuvenating snail gel (Chulayarnnon Siriphol’s Golden Spiral, 2018).

Known for his histrionic Gesamtkunstwerks comprised of trap music, portentous spirituality, action painting, denim, drone footage, and madcap assemblages, Korakrit’s first curatorial endeavor offered cerebral escapism — and a certain subcultural cool quotient — at a time when much of the city’s art scene was in the thrall of a less cogent and more conventional spectacle. Timing Ghost:2561 so that it overlapped with the opening of the public- and private-sector-backed Bangkok Art Biennale was a deliberate move on his part, as he hoped that the context provided by a standard biennale format would throw its elusive conceptual form into sharper relief. And so, at times, it proved.

A few days before Ghost:2561 concluded, an evening of screenings, talks, and performance at Beam nightclub, in Bangkok’s Thonglor neighborhood, offered the most dissonant experience of all. After screenings of short films from New York’s DIS Edutainment Network and a discussion with two of its founders, a live performance by DJ-artist Ashland Mines did something unexpected — hypostasized the collective consciousness of America’s “Black Identity Extremists,” to coin a heated FBI term, in an unforgettable manner. In the twenty-minute Pit Saint, a furious collage of juddering imagery and looped audio snippets, sourced from internet recordings of black American spirituality, accompanied a sexually charged one-man show that was part live-cam BDSM fantasy, part explosion of Dionysian energy. It ended with a nightclub full of people staring up at a bondage-gear clad figure standing, hands cupped in prayer, on a speaker. Of Ghost:2561’s many acts of possession, its attempts to “give form and presence to invisible systems,” this was, to put it mildly, the most confrontational.