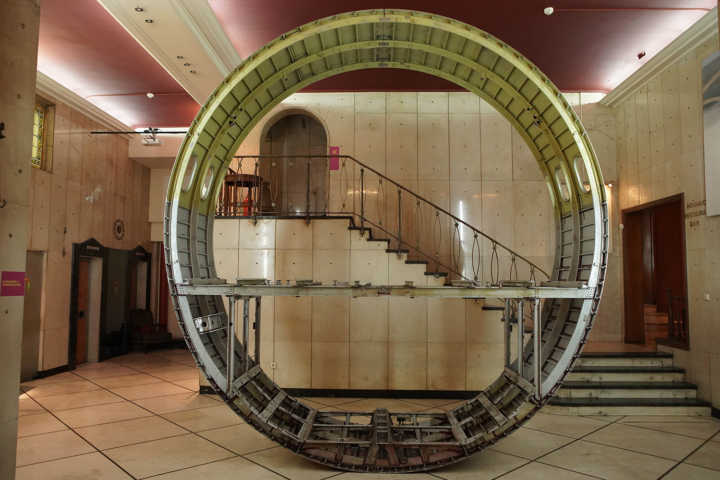 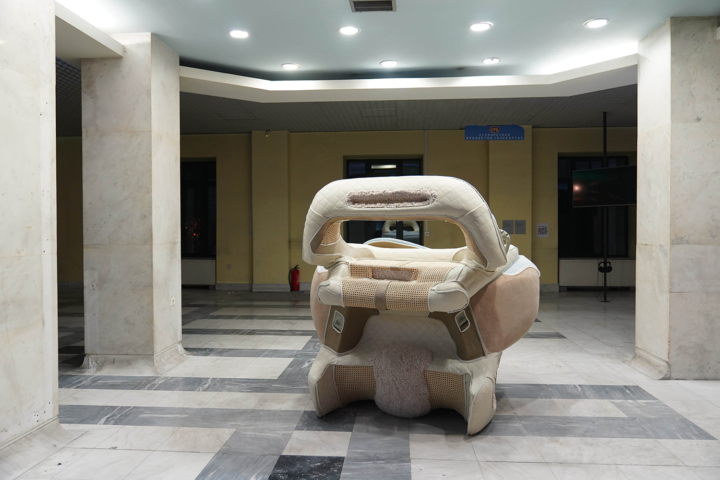 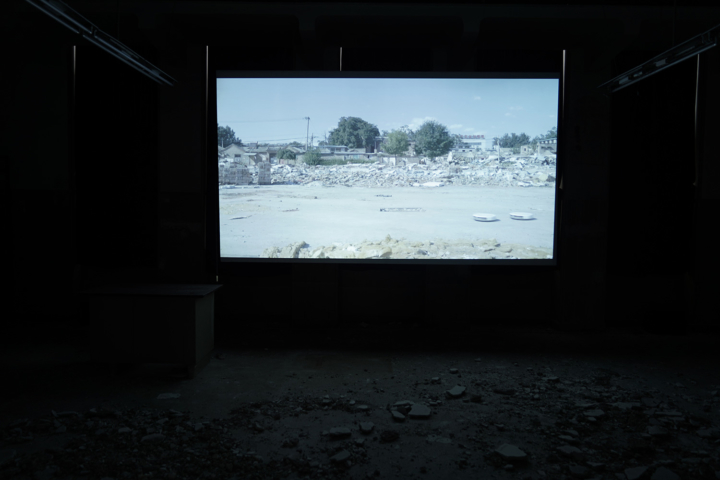 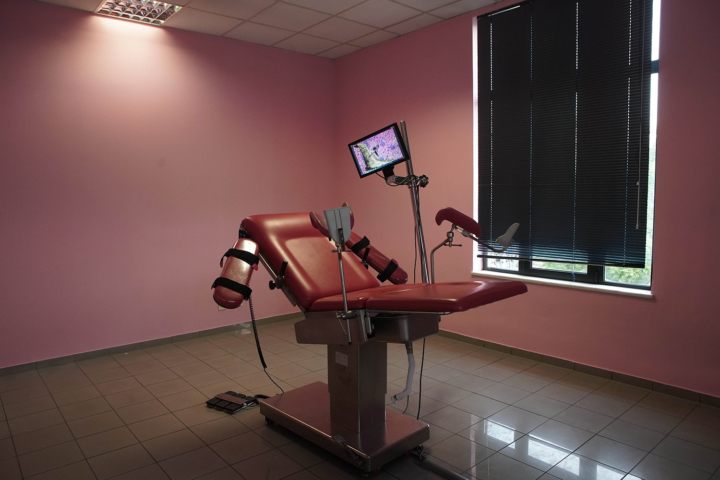 A naked yellow body, head wrapped in bright orange fabric, clasping an enormous bamboo crucifix, spills out of the former Esperia Palace Hotel on Stadiou Street in central Athens. Followed by other figures, one’s back crudely scrawled with the emblem of Golden Dawn, the Greek neo-nationalist party, another circulating with arms raised recalling an ancient Minoan figurine, these members of Panos Sklavenitis’s tribal cargo cult (Cargo, 2018) inhabit an imaginary near future and appear to worship artifacts of Greece’s present and past. Manifesting itself as a mutating, reflecting, and at times grotesque “screenshot” of contemporary experience, the 6th Athens Biennale achieves something not dissimilar to Sklavenitis’s writhing army.

Adopting the title “ANTI,” the Biennale and its four neighboring venues brim with contrasts, reactions, and oppositions. Although careful to point out that “ANTI” is not necessarily a call to resist, the curators Stefanie Hessler, Poka-Yio and Kostis Stafylakis have nevertheless drawn together an uneasy-making collection of provocative artworks and performances that at once provide relief through their conceptual “otherness,” yet still feel uncomfortably familiar.

Drawing us inside a former hotel is Michail Pirgelis’s enormous Memory Games (2017), a section of a decommissioned airliner portraying the vastness of human-made infrastructure and our antagonistic relationship to it. Opposite this hollow hulk is one of Miltos Manetas’s brilliant large-scale oil paintings of cables and USBs, Cables (Togetherness) (2009), which, along with Cables III (1997) and Untitled (hand with cables) (1998), remind us of the apparent simplicity underpinning a constant and tiresome information overload. Elsewhere in the building, one of the most palpable of diametric oppositions: a Chess-boxing arena — the sport’s hybrid matches involve alternating rounds of chess and boxing, straightforwardly straddling the chasm of intellectual and physical pugnacity.

Across the road, the former Hellenic Telecommunications Organisation building, TTT, houses the majority of the artworks contributed by the Biennale’s one hundred participating artists. With the building only officially released to the curators mere weeks before opening, and with the bulk of the artworks themselves not arriving until just days before, AB6 seemed destined to suffer the same fate as the previous Biennale (AB5to6 “OMONOIA,” 2015–17), which was nothing short of a “failure… an experiment with no tangible results,” as Poka-Yio, also founding director of the Biennale, puts it in the AB6 catalogue. Nevertheless, the team behind the Biennale have successfully achieved what they set out to do, citing assistance from large numbers of volunteers working long days.

Despite the somewhat limiting nature of the former office cubicles in which the video-dense selection of works is installed, the six floors of TTT offer a range of discomforting sensations. Ted Davis’s endless youtube.pawgorithm (2016) plays YouTube videos with zero views, essentially self-destroying its future as an artwork. To watch Jon Rafman’s Sticky Drama (2015), which depicts slime-covered live-action role-playing children in saturated color, the viewer must sit uncomfortably close to the screen, ensuring retina burn. Korakrit Arunanondchai’s slick dystopian collaboration with Alex Gvojic (There’s a word I’m trying to remember from a feeling I’m about to have (a distracted path towards extinction), 2016) can only be experienced while being overlooked by a monstrous rat-like creature lacking legs. If Marianna Simnett’s video, The Needle and the Larynx (2016) (the name says it all) or Rachel Maclean’s Eyes 2 Me (2015), in which a doll-like girl is ordered around by an instructive male voice-over, aren’t enough to unsettle viewers, the toxic smell that pervades the rooms of the TTT only heightens the stomach-churning sensation.

Ascending the building, one notices that the depictions of fleeting subcultures, drooling into our sensory orifices, morph into more established representations of resistance: the throb of gabba music subsides into the chirping of Spyros Aggelopoulos’s shadow puppet show (Amusementorium, 2018); and high-contrast digital screens give way to elegant and tender erotic pastel works by Lauren Wy (forty-one in total, displayed in a room with its original carpeted walls). Eighteen portraits in oil from the 1970s and 1980s by the late Celia Daskopoulou line the corridors and still give an uncanny stare. The overarching feeling of unease remains, however, and is successfully contributed to by the docu-film The Seasteaders (2017) by Jacob Hurwitz-Goodman and Daniel Keller, which charts through deadpan clarity the megalomaniac plan of Peter Thiel and others to construct a floating and tax-exempt “substate” off the coast of Polynesia.

As well as being a linguistic prefix, in Greek, anti on its own means “instead of,” which feels prescient in venues such as the Benakeios Library of the Old Parliament, where 32,000 more-or-less obsolete volumes have been replaced with two artworks. Rumba II: Nomad (2015), a video by Cao Fei, which follows robot vacuum cleaners around demolished Beijing hutongs, is projected below a ceiling of the Library that has crumbled to the (un-vacuumed) floor below. Across the corridor lies Pigpen (2016), an enormous latex sculpture of a sow suckling its young, installed by Saeborg, a Japanese collective blending BDSM latex outfits and anarcho-veganism, which is activated during performances by a group dressed as piglets and a maniacal farmer.

Opposition today plays out in a wide array of formats, some of which we may endorse, consciously or otherwise. While the relationship between progressive and reactionary attitudes could be described as a feedback loop, each pole inciting the other, it might also be seen as an ouroboros, with attitudes consuming, rather than feeding into, each other. Either way, our particular idiosyncratic moment is ripe for analysis. This Biennale doesn’t provide a solution, but rather investigates differing and current reactions to it. A man sporting a tutu and painted from head to toe in the colors of the Greek flag wanders back up Stadiou Street; a homeless lady lying adjacent to the Biennale’s entrance looks right through him, unfazed.

The Marrakech Biennale’s executive president Amine Kabbaj seemed deeply emotional as he dedicated this 6th edition to Leila Alaoui, the…