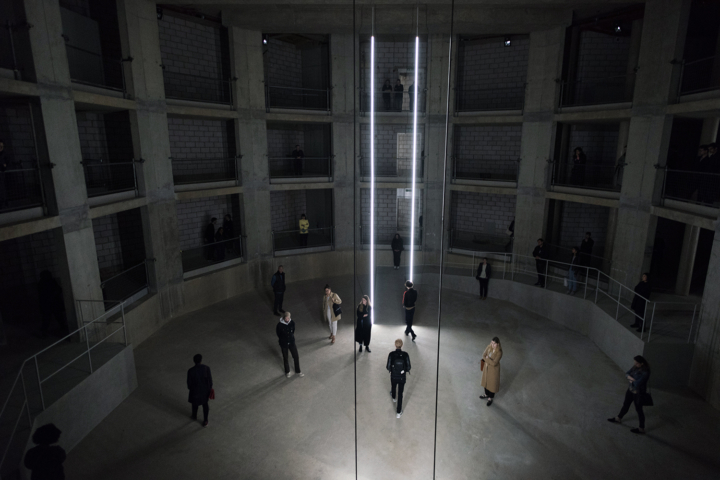 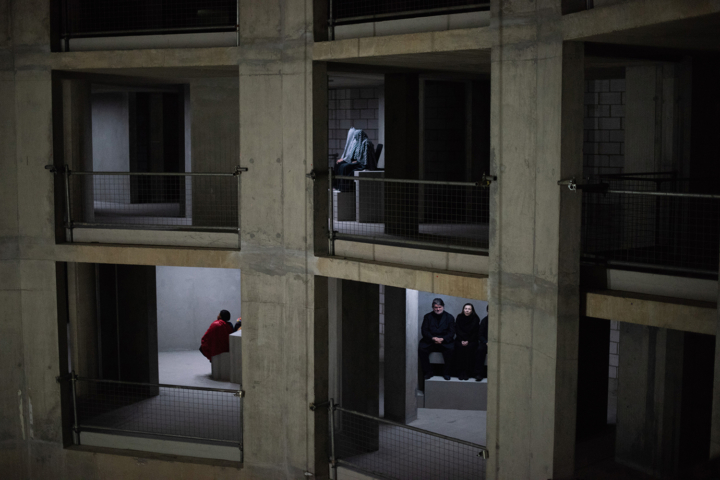 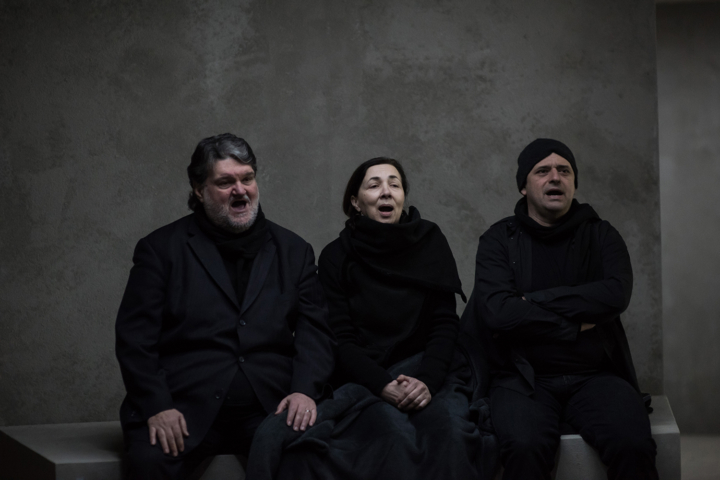 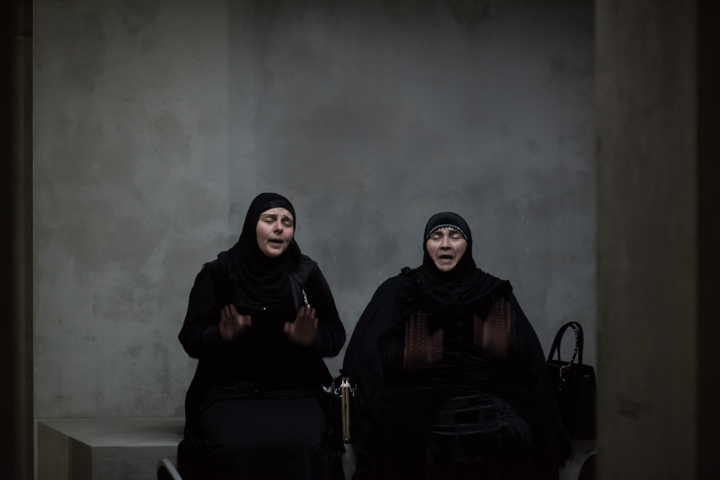 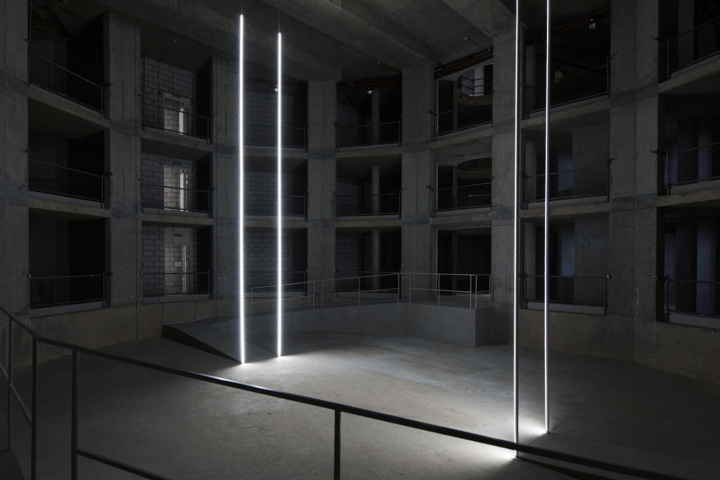 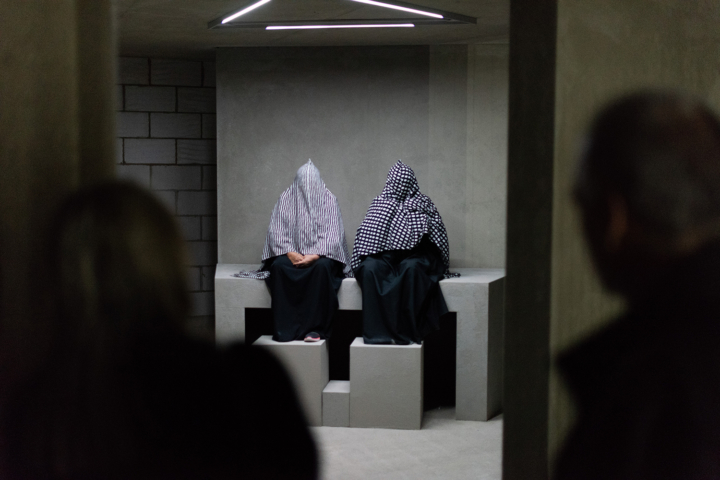 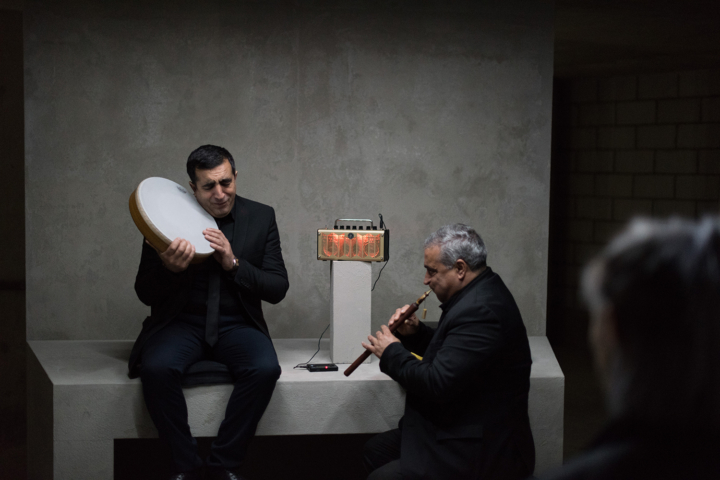 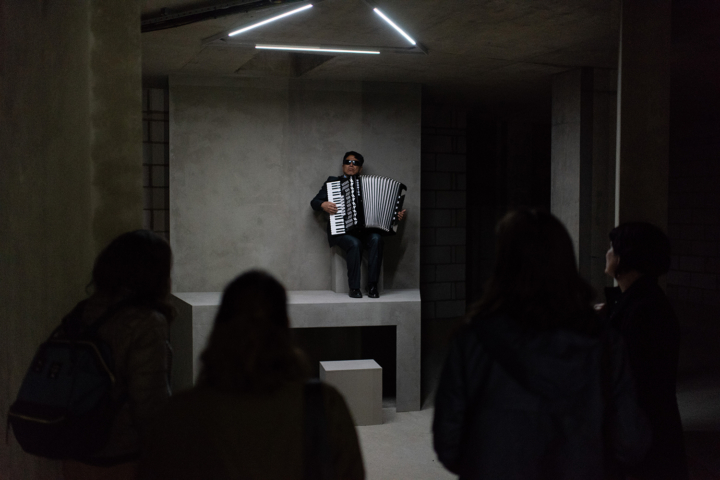 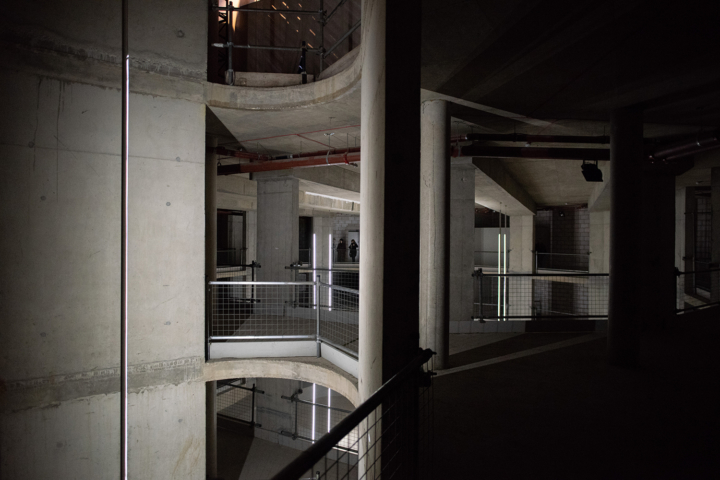 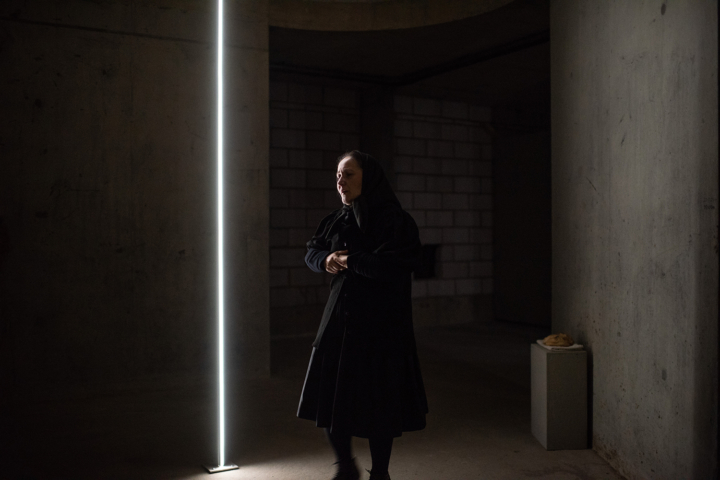 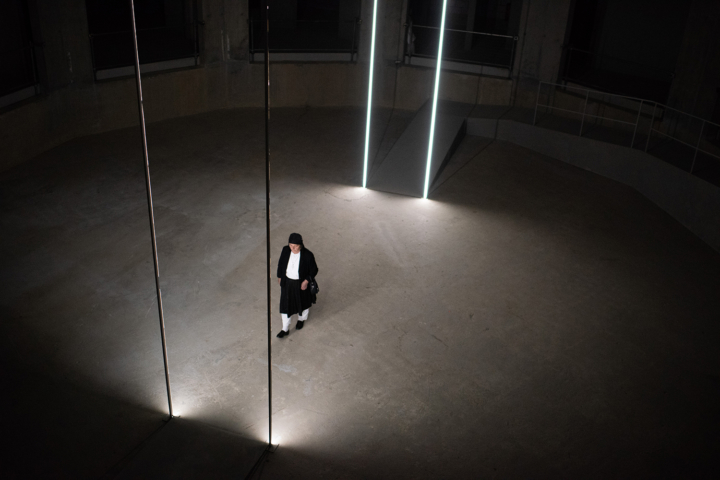 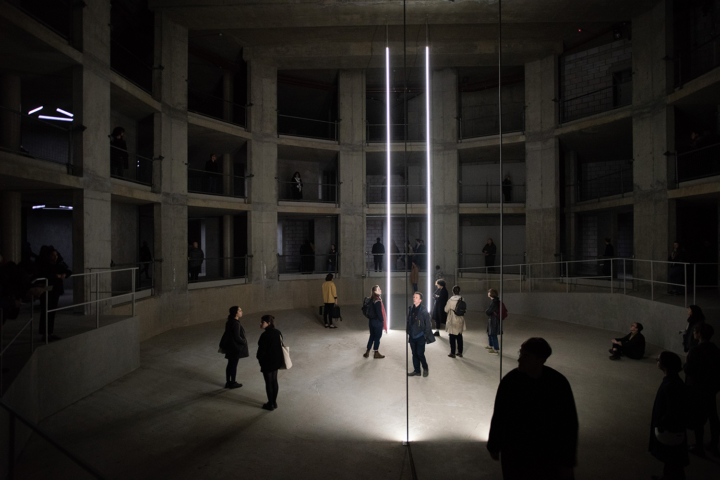 An Occupation of Loss, artist Taryn Simon’s first performance work, was commissioned by Park Avenue Armory New York and Artangel London. The work unfolded in two chapters: the first in New York in September 2016, and the second in an unfinished London theater located beneath a luxurious yet kitsch residential glass/concrete block on the corner of Islington Green, which felt both urban and unfamiliar. Its three-balustrade circular form, excavated underground, created a somewhat sci-fi setting for mourning rituals acted out by professional mourners, or collaborating artists, suggesting an imaginary bridge between past and future amid uncertainties in our age of individualism.

The Park Avenue Armory is itself a historic brick building of monumental proportions on Manhattan’s Upper East Side. There, the choice to work with Shohei Shigematsu and OMA resulted in a very imposing display, with eleven massive forty-eight-foot-tall concrete pipes displayed in a semicircle, each endowed with a boardwalk aimed at a center point and marked by a passage of light defined by two thin neon columns. The live performance, which lasted around forty-five minutes in both cities, connected each pipe to a mourner, staging what felt like a funeral inside a Brutalist chapel. The mourning ground in London was instead nestled within the existing architecture of the theater with two central light passages — a choice that could be seen as a doubling of the original semi-circular space, and also evocative of the light shafts organized as a tribute to the victims of the September 11 attacks in New York, the artist’s hometown.

Simon’s work always allows for an open-ended reading, framed by the painstaking methodology of an anthropologist. In fact, her practice — mostly photographic until An Occupation of Loss — requires extensive cognitive work and research embodied in a carefully designed form. She draws upon found images and their inherent stories, which often have profound implications — cultural, political, economic — as is the case of A Living Man Declared Dead and Other Chapters I – XVIII (2008–11) and Paperwork and the Will of Capital (2015).

However, Simon’s subjects are openly decontextualized, a feature that in her transition from photography to performance can suggest dehumanization and displacement. This intent seems affirmed by the featured book on display at the show, which is a collection of paperwork and visa requests for the performers to travel. Each book is site-specific to the two venues, implying the governmental authorship of the artwork based on their approval or refusal of the mourner’s visas. The performance felt at once choreographed and cacophonic, an upside down Tower of Babel with a fragmented humanity gathering to express an insatiable need for belonging during the paying of last respects. Singers and musicians from Greece, Azerbaijan, Armenia, China, Cambodia, and other countries expressed a wide range of laments and exhortations; Ghanaians sobbed while a blind Ecuadorian accordionist set the rhythm. Each of them filled the space with a dense sense of what is inevitability shared across borders and civilizations.

The event felt mysterious and solemn, with a silent crowd of spectators moving from one group of performers to another and lingering between the two neon columns. The artist’s appropriation of ancient and mostly non-Western mourning practices — a recurring trope — is thorny. However, Simon disallows speculation by keeping everything under a rigorous discipline fed by scientific collaborators such as linguists, musicologists, anthropologists, and field workers over an eleven-year time span.

There is currently no archive of collective mourning practices worldwide, which made preparation of the performance arduous but also led Simon toward an unprecedented attempt at creating new taxonomies. Beneath this straightforward framework, An Occupation of Loss calls for an examination into the legacy of a seemingly vanished humanism in post-capitalist society — a missing piece that has been addressed by a number of academics, and more specifically referred to as a “community” — in contrast to rising individuality — by Zygmunt Bauman in Community: Seeking Safety in an Insecure World (2001), and as a “center of gravity” by Charles A. Kupchan in No One’s World: The West, The Rising Rest, and the Coming Global Turn (2012).

In his third solo show at Simon Lee, Toby Ziegler provides a journey into his idiosyncratic notion of memory and…

In 1967 Germano Celant observed how Luciano Fabro (1936–2007) “reproposes the rediscovery of a pavement, a corner, or the axis…