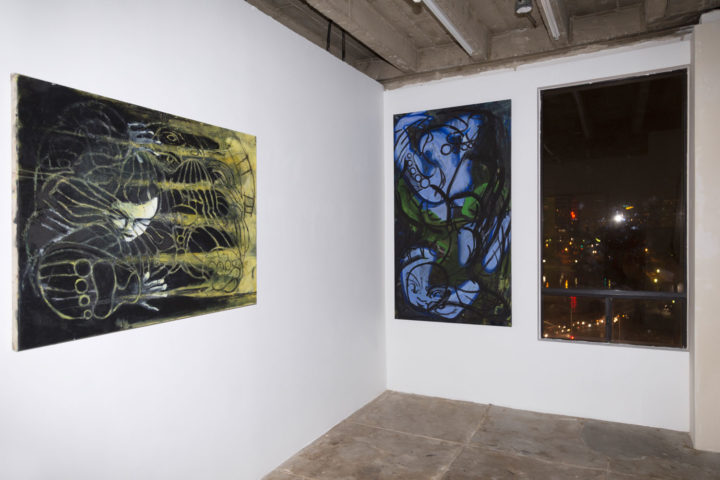 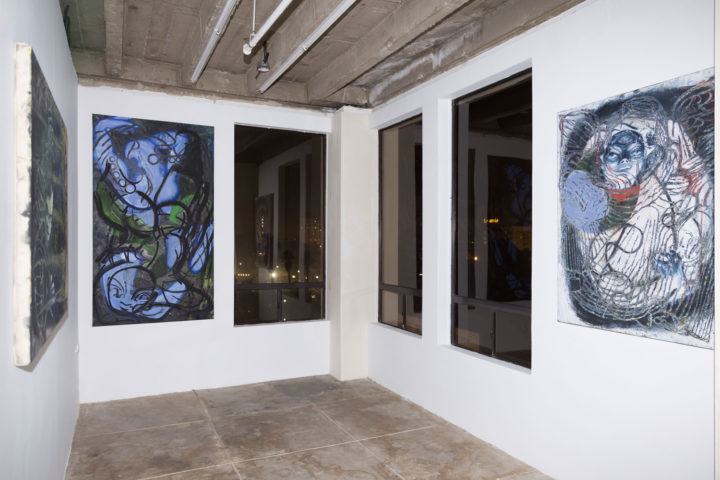 Reverse psychology. Self-prescribed permission to wander off the moral path. A vice of my own, to have and to hold. It’s tough to pinpoint or map out any real claim to accurately explain why we have become the drug addicts we have become, or how it happened so fast. What we do know is that life is a living hell — and it’s a miracle we’re not dead yet.

Live Burial, Emma McMillan’s current solo exhibition at Bad Reputation in Los Angeles, is similarly a matter of life and death. In her usual fashion, the artist exhumes and dissects sacred material from “the junkie’s crypt,” as she refers to it, the activity comprising a prolific period of methamphetamine-fueled output.

The show comes together as an art-historical investigation of archaeological proportions, summoning palimpsests in paint that form a basis for emergent Christian icons — however nonmiraculously. Canvases previously coated with innumerable layers of paint, then for some years abandoned, have been revisited and given new life, the artist this time using a high-speed rotary tool to shakily inscribe divine counterparts into the original muddied grounds of their built-up surfaces. Velocity, it seems, has been left in the hands of a blind driver. The paintings-cum-sites of linear excavation uncover two routes toward figuration, suggesting dual but disparate timescales that manage to harmoniously cross paths. Breaths align and pairs of bodies collapse into each other. They meet for a moment, then freeze in simultaneity as the accumulation of both additive and subtractive gestures remain, in the end, painfully evident. But are there actually morals to each and every story? Allegorical lessons entombed? Too much addition becomes an addiction, and the all-time highs do not descend without carving steep valleys on their way out.

It’s mostly a blur. What’s lost of one’s memory disengages from its author, and a covered-up fuck gets named the Immaculate Conception. Sorry I’m not sorry. (Please God forgive me.) A lapse in cognition requires that bridges be built in order to successfully retrieve actions carried out during dissociative states.

And it is this absence of self, a mysterious vacancy, which becomes the anomaly to observe and savor in hindsight. The artist’s then-altered state — characterized by inhibitions diminished or delusions drawn out — paved way for radical exercises in freedom and instinct. Transcendence can be reached via any number of available avenues.