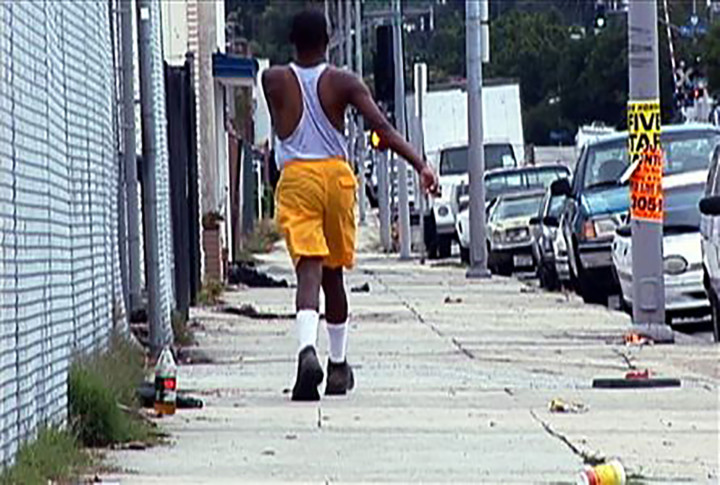 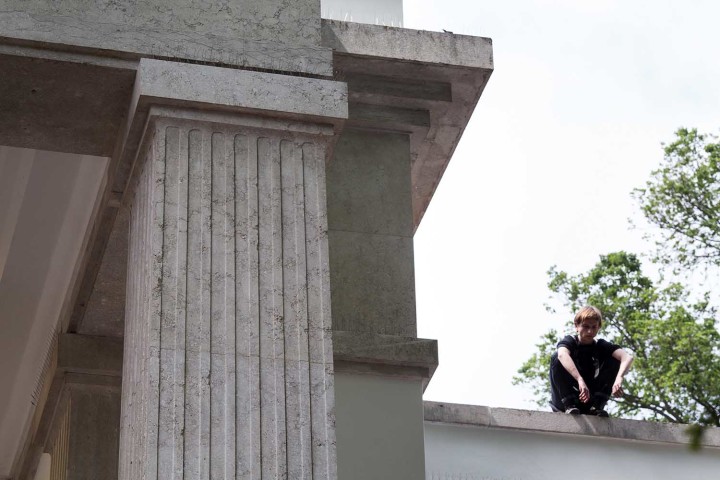 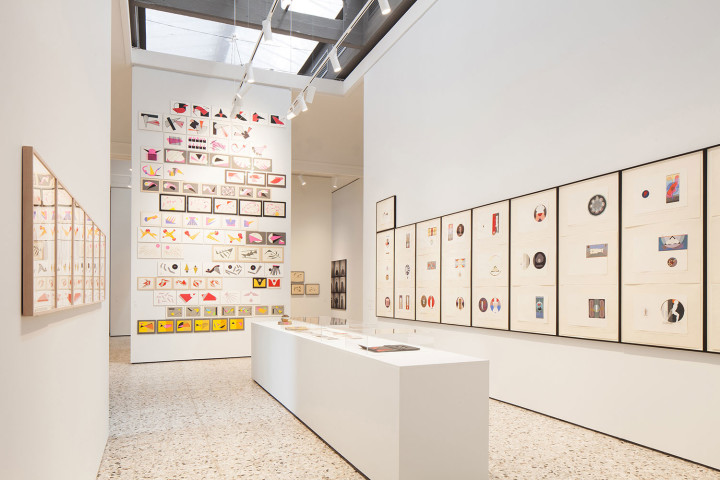 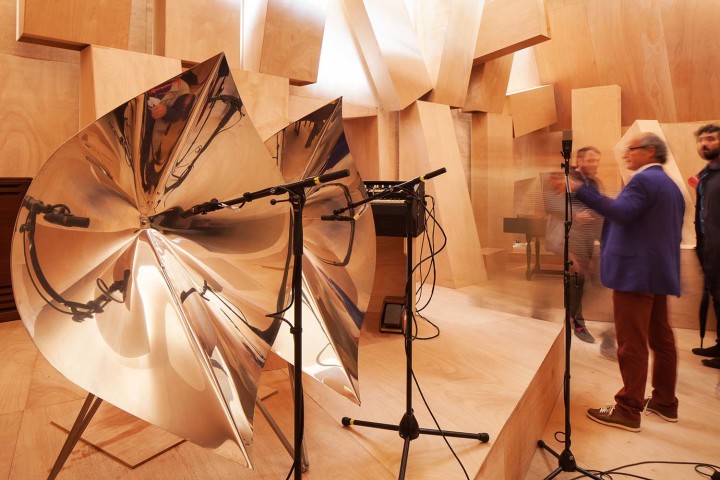 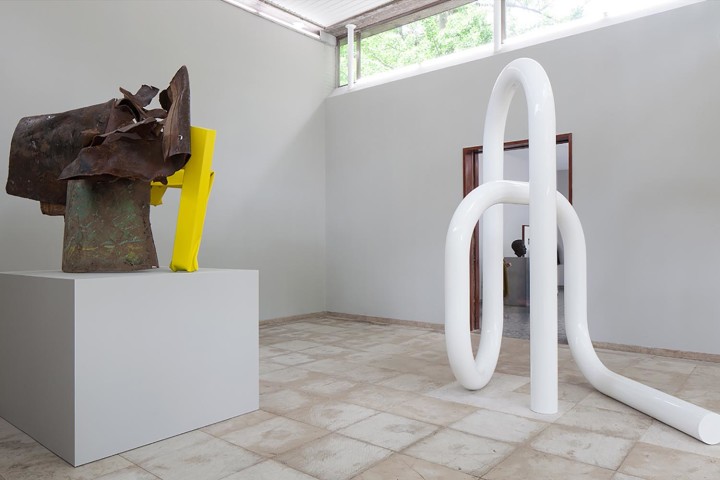 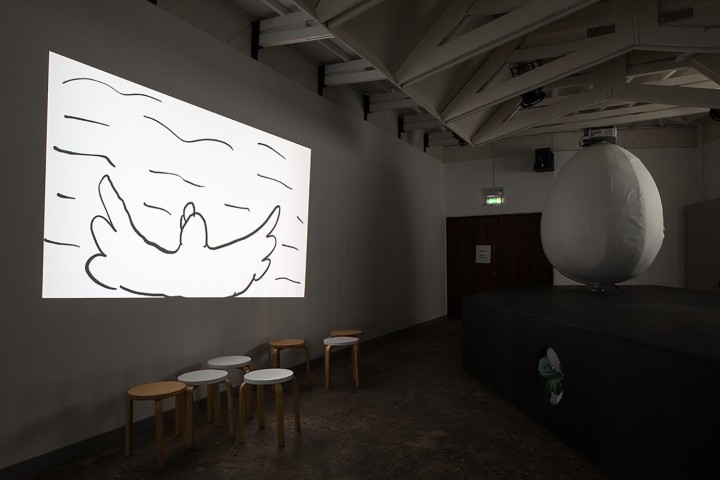 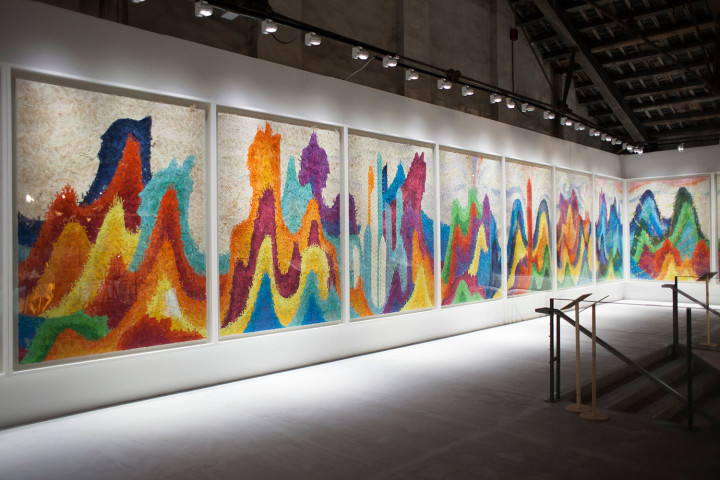 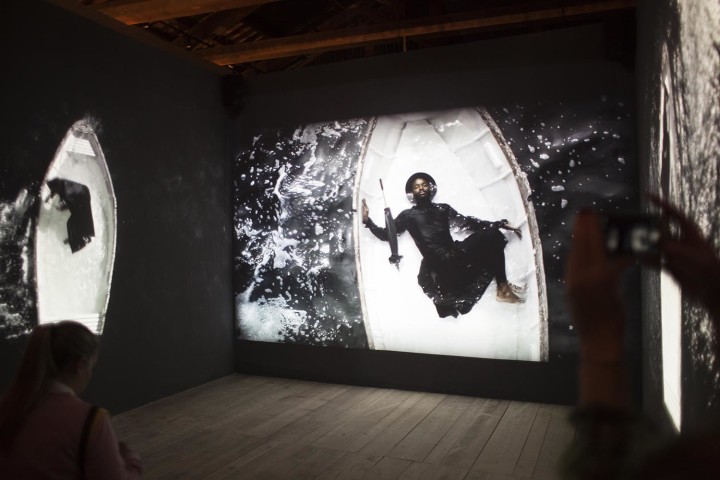 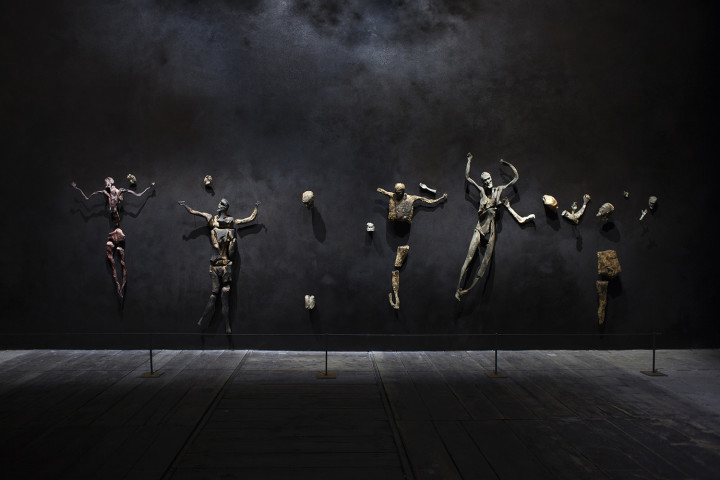 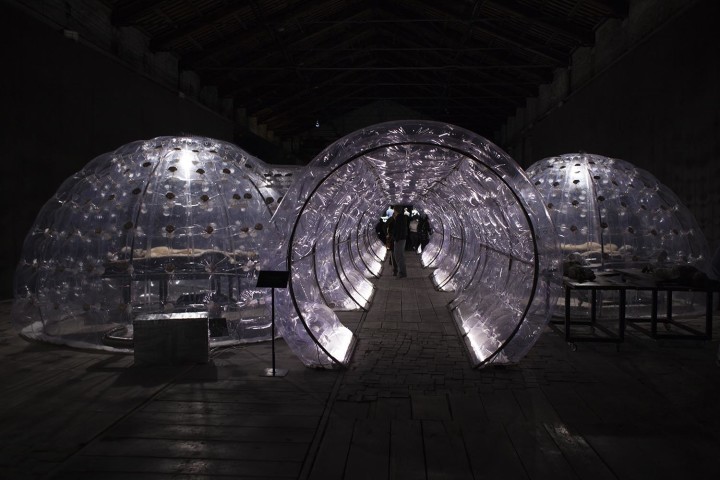 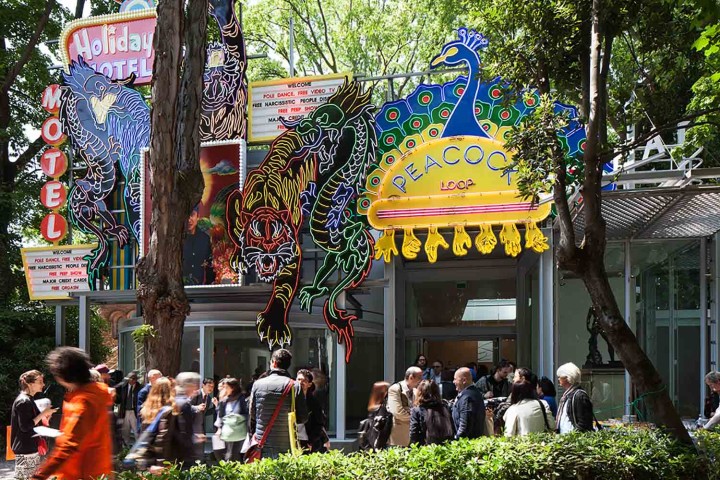 “Art is not the way to change the world, not the place to change the world, otherwise we would know it.” Artistic director Christine Macel’s soothing words of realartistik on the opening morning of the Biennale served to problematize the experience of the real pavilions as much as her “Trans-Pavilions” that demarcate the space and punctuate the course of the International Exhibition.

Given the bluntly political nature of the national pavilions, the question this year was whether they would cultivate the guise of apolitical safe spaces, approximating narratives of sanitization and disengagement, or perhaps worse, pseudo-engagement.

Yet a number nurture positions of canny ambivalence appropriate to this strange island of nations. Anne Imhof’s turbulent appropriation of the German pavilion –– modified by transparent false flooring and occupied by her team of performing sculpture-antagonists –– situates its perpetual trail of visitors in an uncomfortable role-relay between subject and object, hunter and hunted. Entitled Faust, and guarded by a pair of caged Dobermans whose periodic dashes back into the pavilion uncannily replicate the looping rhythm of the internal performance, this five-hour Gesamtkunstwerk trades in irony for a biting critique of consumer culture. With jarring flashes of branded leisurewear interrupting their largely black garb, the performers are simultaneously implicated as hipster-specters perpetuating the system –– the pillars of a neoclassical institution. At a time when irony has become the cloak of choice for extremist ideologies, Imhof’s glare is laser-sighted.

Geta Brătescu’s own treatment of Faust (1981–2), a “mental studio” of thirty-one works on paper, is part of a formidable retrospective at the Romanian pavilion. Ranging effortlessly across media, Brătescu assimilates and reorients modernist visual strategies while addressing female subjectivity. Her 1978 film The Studio, whose tripartite structure –– Sleep, Waking, and Play –– narrates her from object to active subject, accords with a Biennale “by artists, and for artists.” By contrast, Xavier Veilhan’s French pavilion is avowedly relational. Titled, Studio Venezia, this free-form recording studio-cum-market square embraces accident by encouraging musical experiment. By turns underwhelming and overwhelming, the space serves here as a neutral zone seemingly unencumbered by the normal institutional levers, and a working prototype for further incarnations in Lisbon and Buenos Aires.

Alberto Giacometti forever refused to represent his native Switzerland at the Biennale, opting instead to present his sculpted Women of Venice at the French pavilion in 1956. In Flora, a documentary film installation by artist couple Teresa Hubbard and Alexander Birchler, the Swiss pavilion becomes the site for a historical reconstruction of Giacometti’s early biography, specifically his relationship with American artist Flora Mayo. Via moving footage of Mayo’s son’s recollections, the extent of Giacometti’s emotional and artistic bond with Mayo –– practically eliminated from art history –– becomes clear, and is further annunciated in Bust, a reproduction of her destroyed portrait of Giacometti, known previously only from a photograph.

A different kind of historical reexamination occupies the Finnish pavilion. Situating visitors alongside animatronic sculptures conversing in space and on video, Nathaniel Mellors and Erkka Nissinen’s The Aalto Natives imagines a pair of Messiah-types from the future returning to debate and critique a Finland they once created. In a tone of disarming absurdism, Geb and Atum provide penetrating political observations on our time of historically irrational decision-making; just as, in a paean to porousness, Phyllida Barlow’s folly spills out of the British pavilion with a lightness belying its bulbous concrete forms. Mark Bradford develops a comparable language for the United States pavilion. Seeking to avoid what he calls “Instagram perfection,” his monumental paintings and sculptures share a willful obtrusiveness that shows up “the culture industry and the gray economy” for what it is. While, over at the Chinese pavilion, Tang Nannan’s mesmerizing video seascapes in monochrome slow the pulse, soon to freeze in Dirk Braeckman’s ashen-hued photographs at the Belgian pavilion. Veiling his subjects: figures and landscapes, Braeckman scours our digital reality for the analogue truth.

Having experienced life in Mongolia when it was a Soviet satellite, as well as its recent history of extreme globalization and resource exploitation, Chimeddorj Shagdarjar’s contribution to the Mongolia pavilion is an ensemble of sixty bronze cranes, titled Bird (2016). Based on the image of a crowd of young Mongolian men and women lining up for visas, his splicing of the bird’s trudging legs with the form of a bent-barreled sniper rifle juxtaposes the seasonal movement of cranes across Asia with the paradox of a landlocked nation rooted in nomadism. Coupled with Raped (2016), a video by his compatriot Bolortuvshin Jargalsaikhan in which she asks: “Why are we raping mother nature?…It feels like parts of my body are falling apart,” the Mongolia pavilion defines a Biennale in which transhumance analogizes disembodied times.

The Tunisian pavilion addresses the plight of migrants entering Europe head on. Comprising three kiosks located around the city, visitors are offered the chance to obtain a “Freesa,” a document notionally allowing universal free movement, but in practice designed to elevate a narrative of historic tragedy to one about the aspirations of migrants themselves, including those manning these very kiosks. Next to this, grandiloquent press releases describing how “visitors as performers experience both settledness and nomadism, containment and exclusion, mobility and immobility” (describing the otherwise exceptional Erwin Wurm at the Austrian pavilion) are difficult to stomach, though they reflect a tendency in Western art speak to catastrophize so as to legitimize works of art. Of course the opposite of this tendency is the demand for palatability in the digestion of the unpalatable. And it is this syndrome that Candice Breitz addresses in her six-screen video installation at the South African pavilion, entitled Love Story. Offered the choice between hearing the same harrowing stories from the immigrants themselves or by Hollywood actors on a big screen, we are forced to face up to our own willed detachment.

Other pavilions unpick these threads more obliquely. The Greek pavilion reframes Aeschylus’s Suppliant Women, specifically the dilemma between saving the foreigner and preserving the native, as an experiment relayed on a series of monitors. Forced to decide between allowing one cell population to interact with a second, foreign population, or to isolate the latter and condemn it to extinction, this collision of cultures is left unresolved. By contrast, Gal Weinstein’s Sun Stand Still at the Israel pavilion fully embraces biohazard through a combination of eclectic materials –– metallic wool, felt, pillow stuffing, coffee, and mold –– that together transforms the space into a Petri dish whose unnatural funk is a statement of Western decay as disconcerting as it is beguiling.

According to the Neapolitan philosopher and anthropologist Ernesto de Martino, only magic can resolve this crisis and reconcile our presence in the world. If so, Roberto Cuoghi’s factory of imitation Christs at the Italian pavilion exudes a black magic indeed. And while Adelita Husni-Bey’s tarot reading next door begs us not to despair, Giorgio Andreotta Calò’s basilica of silence prays we reflect. 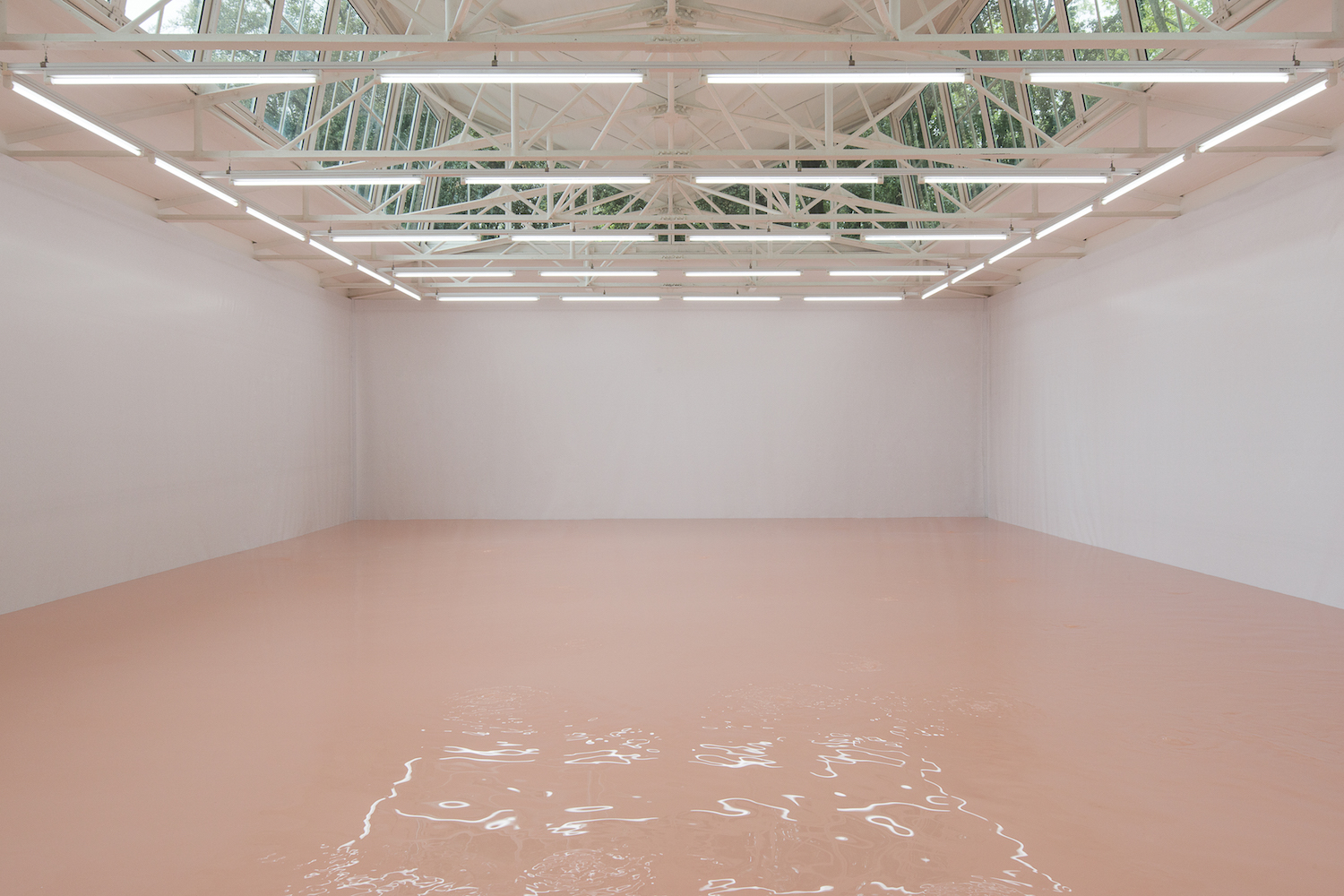 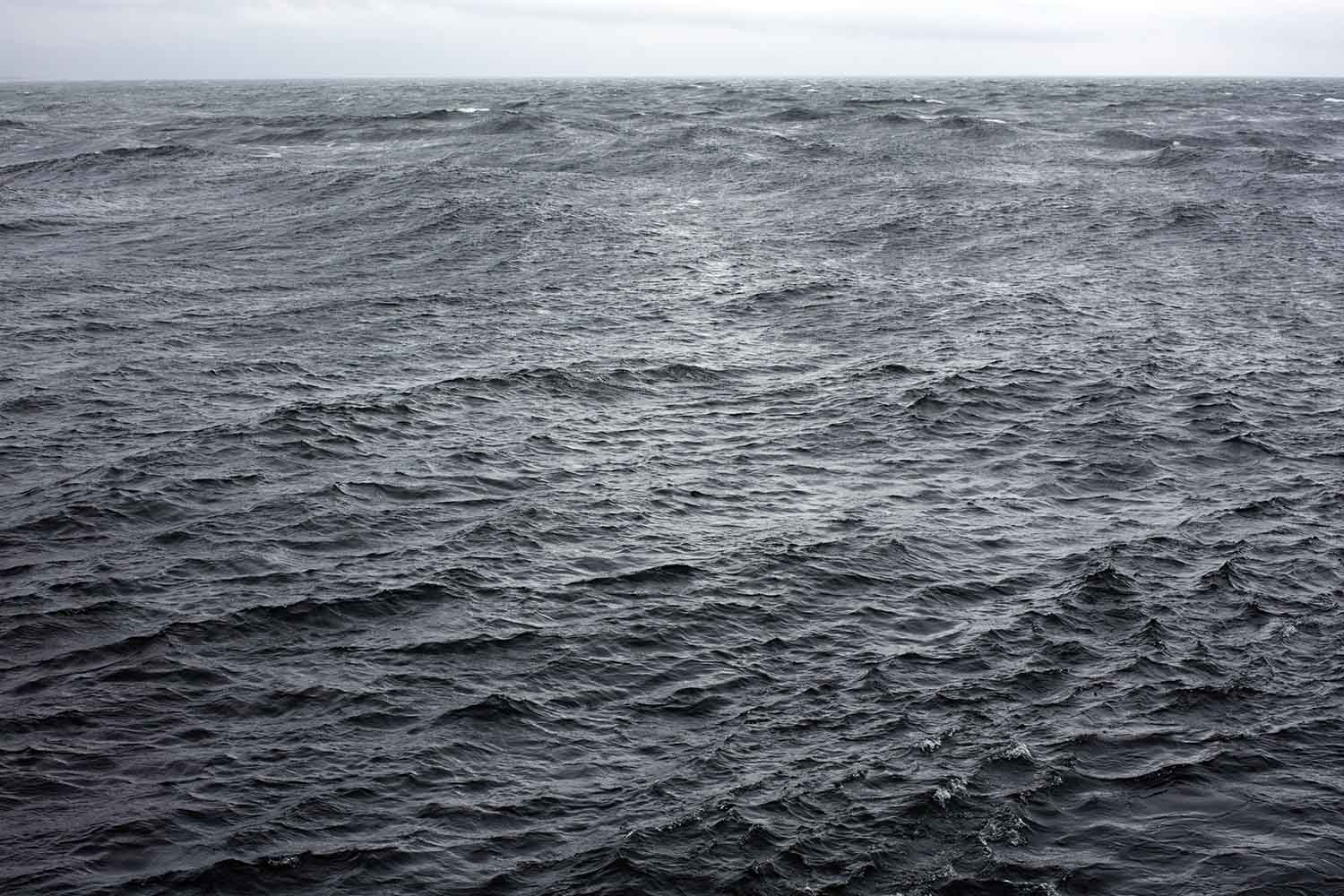