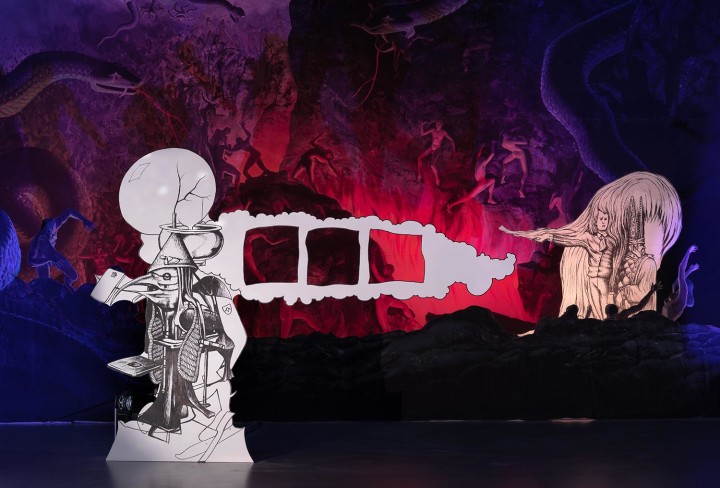 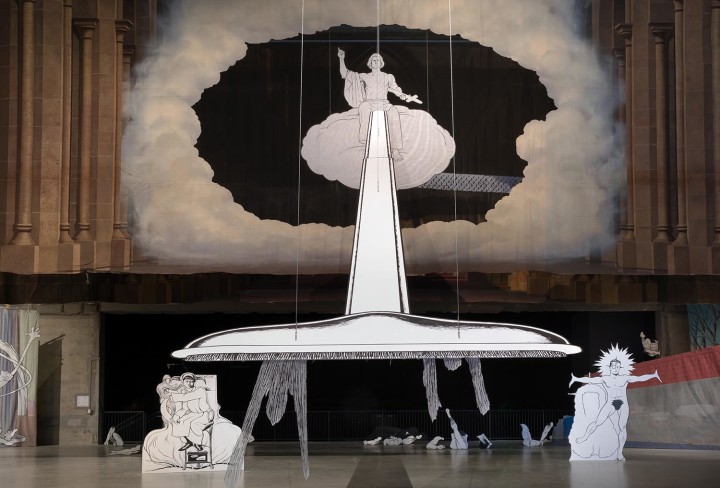 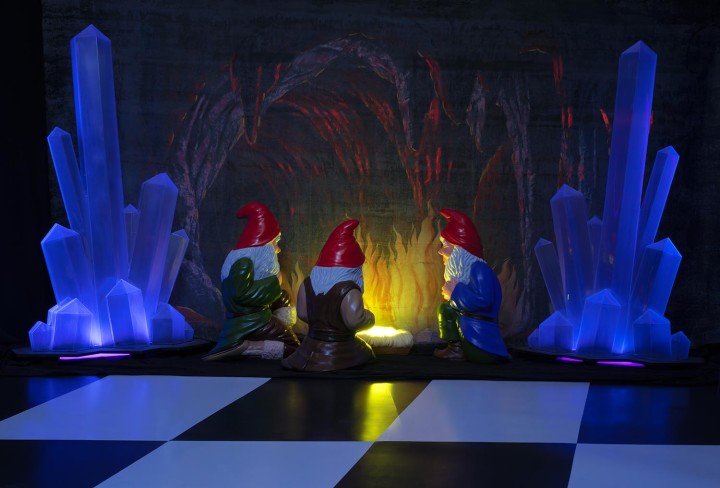 Maurice and Paul Marciano, the two brothers who founded the denim company GUESS?, realized a tour de force with the opening of their new art foundation. Located in the Windsor Square neighborhood of Los Angeles, the Marciano Art Foundation is housed in the iconic Scottish Rite Masonic Temple, designed in 1961 by Millard Sheets. At its peak, eighteen thousand people were members here, all men, from very diverse backgrounds and ethnicities.

The space was renovated by Kulapat Yantrasast of wHY Architecture and opened to the public last Thursday with the first major Jim Shaw exhibition in Los Angeles. Bigger than “The End Is Near,” presented last year at the New Museum, “Jim Shaw: The Wig Museum” is a labyrinthine display of furniture, stage sets, robes, backdrops, wigs, regalia, paintings, drawings and sculptures across fourteen thousand square feet in the former masonic theater space.

Much of the material that the artist used (wigs and backdrops, for instance) was found on site, as they were props for masonic plays and initiation rites. When asked to curate the inaugural show for the Foundation, guest curator Philipp Kaiser connected the dots: Which L.A. artist, interested in the esoteric and emblematic figures of power, could do something fantastic with these monumental theatrical backdrops and other relics? Jim Shaw was the ideal candidate. After his New Museum show, this project seemed like a good fit, a natural progression for his use of occult imagery and reappropriation of found material. But the artist didn’t just stage the found artifacts. He airbrushed, cut through, manipulated and repurposed the original pieces, most of them from the 1960s and 1970s. He also found some pieces lying dormant in Hollywood warehouses, and included his own artworks. The result is a remarkable show that reactivates the temple’s aura and purpose, culminating in an ironic interpretation of the apocalyptic end of Anglo-Saxon power.