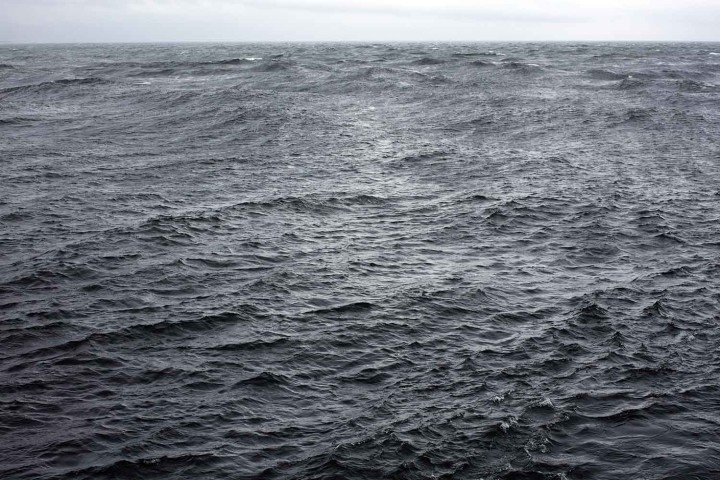 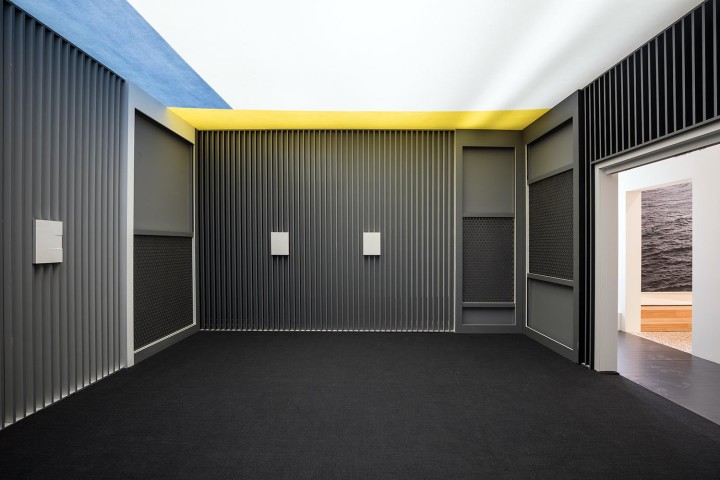 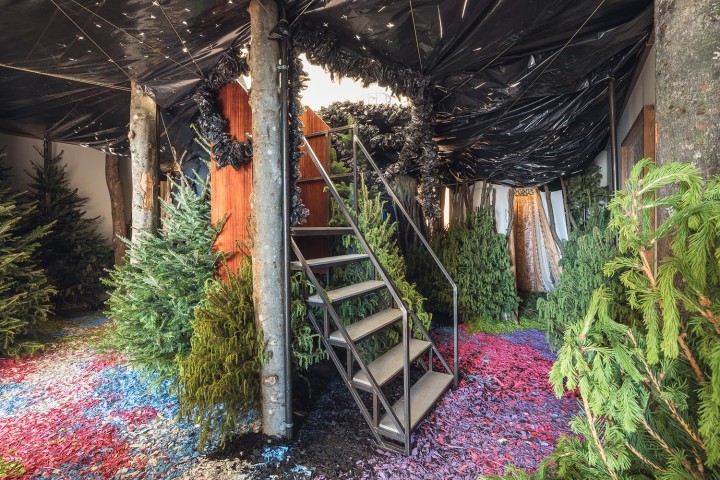 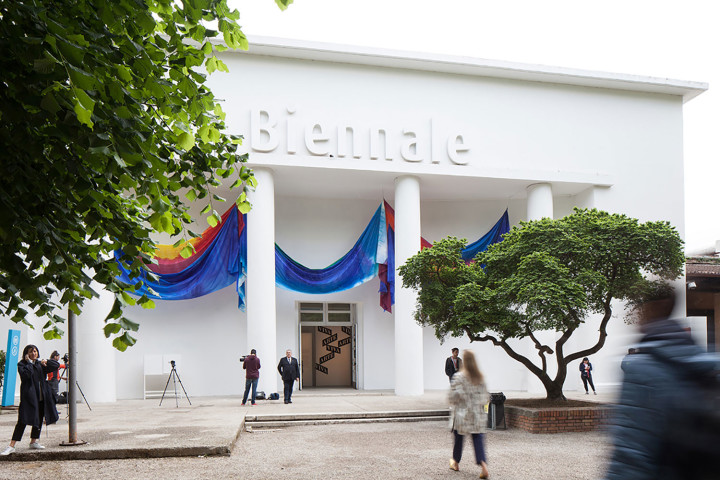 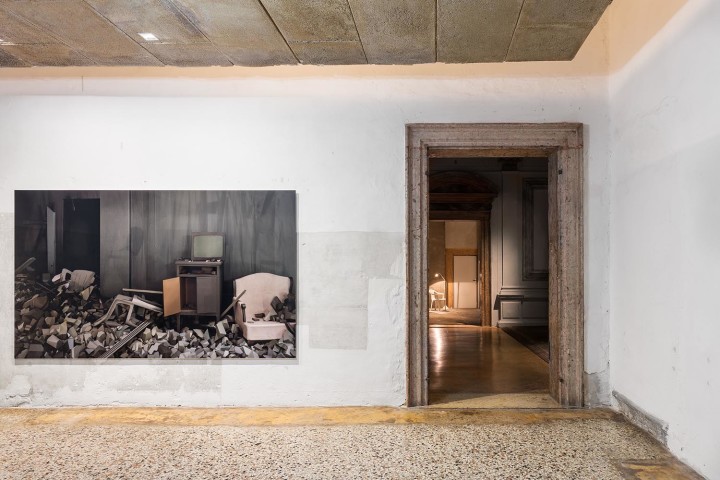 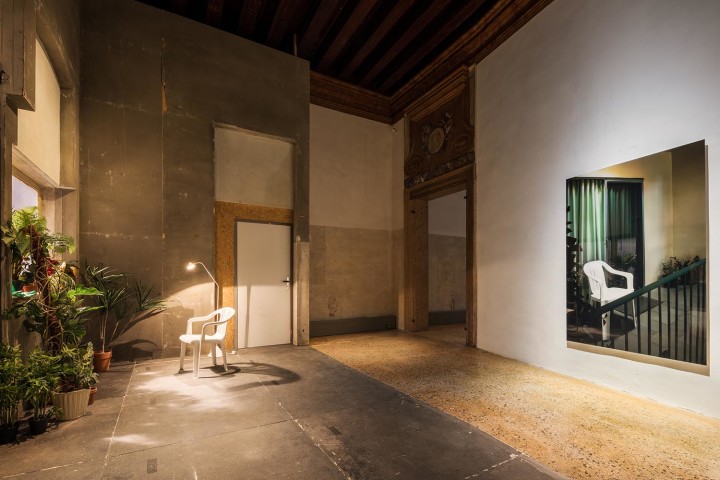 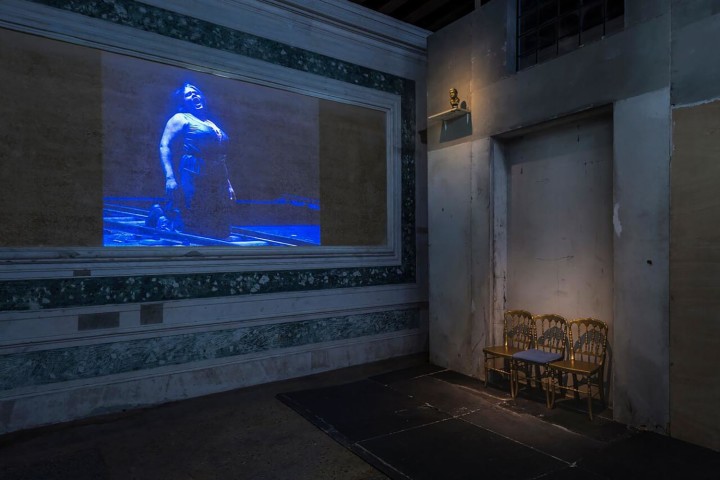 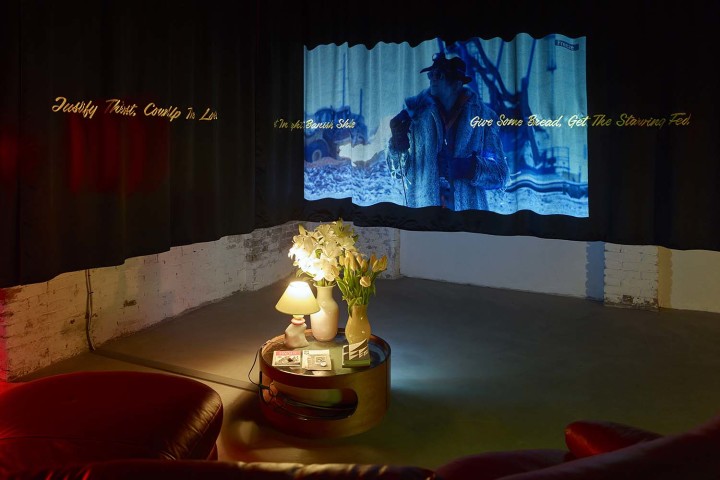 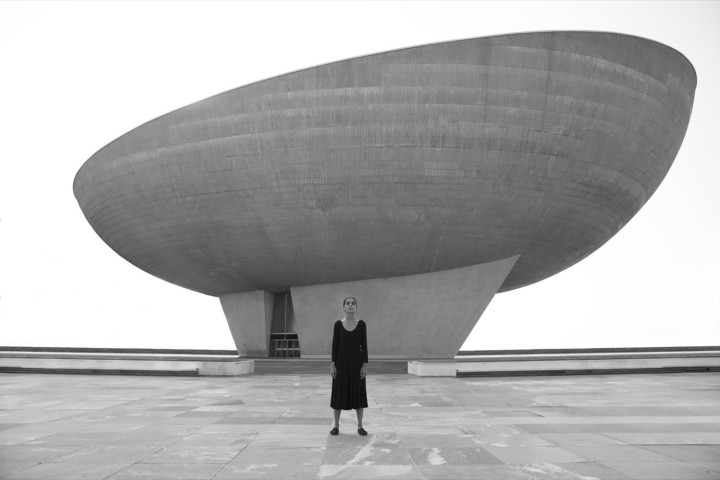 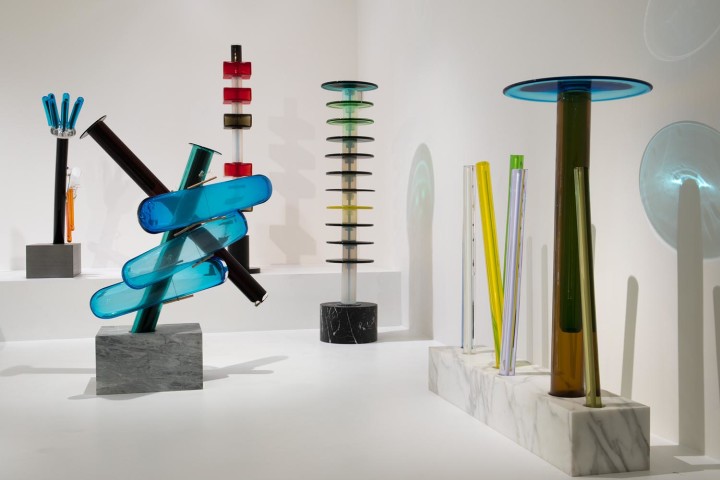 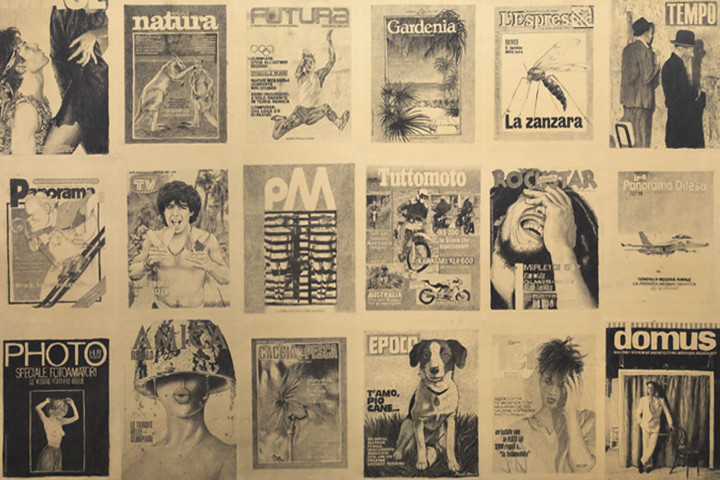 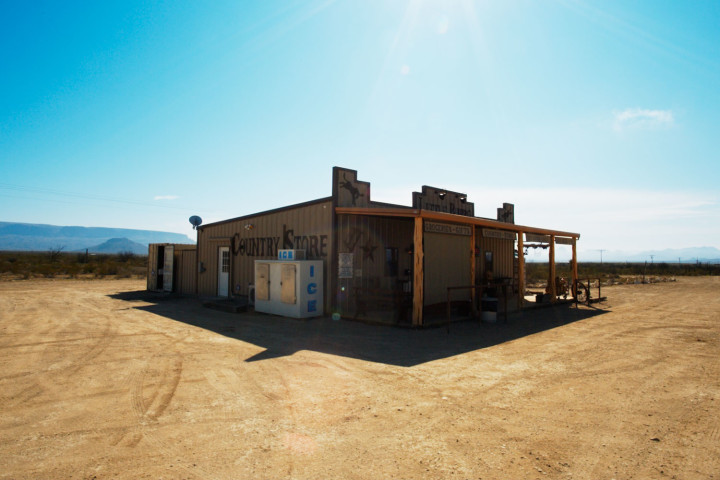 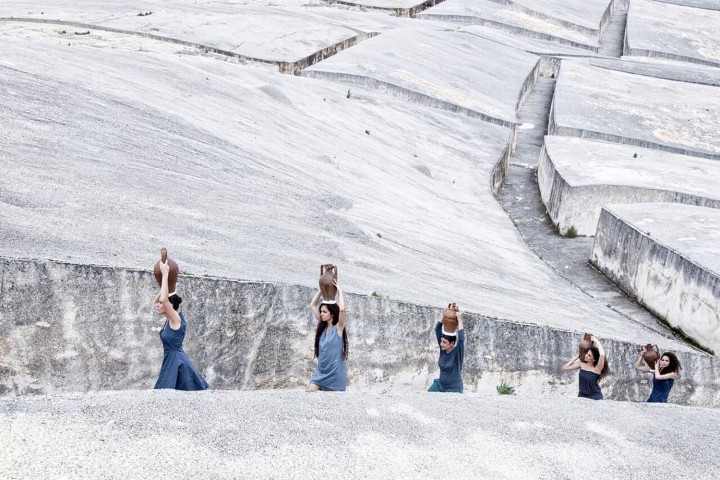 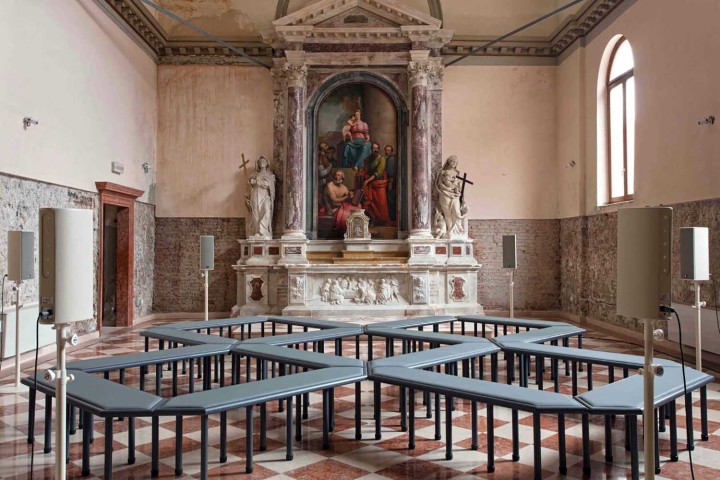 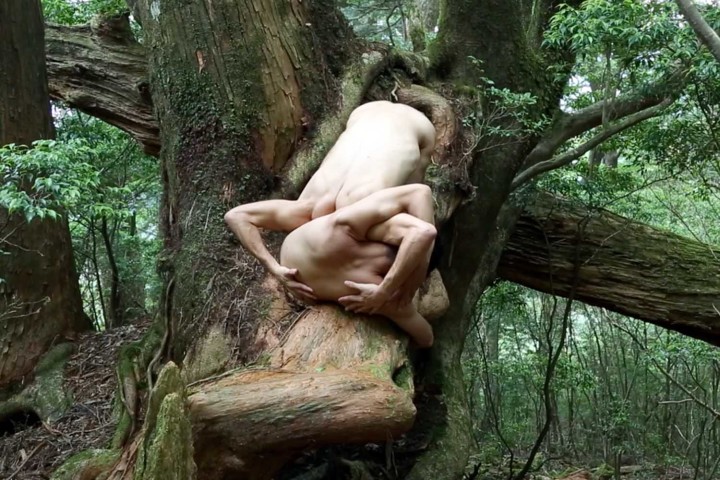 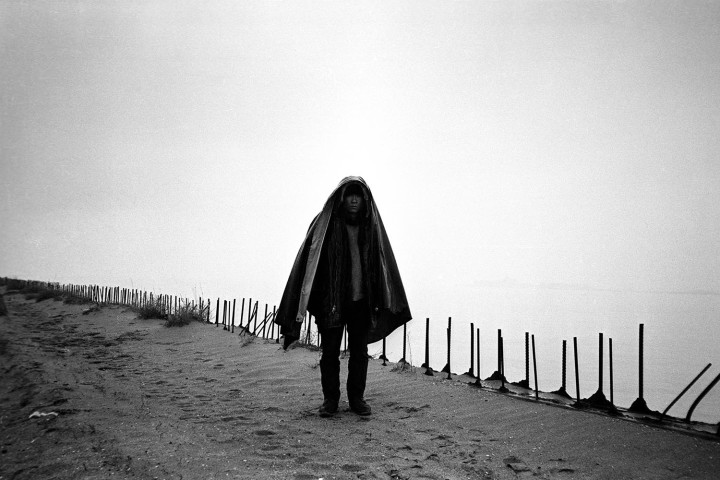 Hanging from the vestibule of the Central Pavilion, and disrupting the white rationality of the entry colonnade, is Sam Gilliam’s Yves Klein Blue (2015). Its soft and colorful draping adorns a cheerfully carefree biennial, devoted to a Eurocentric joie de vivre.

Indeed, according to Christine Macel, art is a space that allows an escape from the present political turmoil, to reflect on the self and restart from the subject (a notion the curator defines as “neo-humanism”). “Viva Arte Viva” declares the defeat of art as an engine of transformation, offering instead a retreat into an autopoietic imaginative universe. To mark the border between interior and exterior and to underline the division between political and artistic realms are Gilliam’s polychrome banners. The flag represents a rejection of the present and a reaction to the past — more precisely, to Okwui Enwezor’s biennale and to Oscar Murillo’s black flags, which in 2015 were located in the same position as Gilliam’s work. But can a signal flag completely exclude today’s injuries, tragedies and emergencies? Is it enough to furl the previous standard and put an end to a discourse regarding, in this case, art as a tool for an ideal, for tangible regeneration?

In Laguna there are several examples of exhibitions able to capture the uninterrupted process of contestation and renegotiation. “Space Force Construction” is presented by V-A-C Foundation — a Moscow-based foundation opened in 2009 by Leonid Mikhelson, dedicated to the promotion and study of Russian art — in their new Venetian space at Palazzo delle Zattere. The exhibition deals elegantly with the relationship between political ideals and artistic utopias, proposing a dialogue between a hundred works of the Bolshevik period and others by contemporary artists including Wolfgang Tillmans, Tania Bruguera, Barbara Kruger, Cao Fei, Christian Nyampeta, and Irina Korina. The setup plays with scenography, reenacting historical installations (El Lissitzky’s Room for Constructive Art, 1926) or works never realized (Gustav Klutsis’s Design for Loudspeaker from 1922, preserved in a series of drawings by the artist) in a masterful balance between reality and fiction.

Another show that exploits the theatrical apparatus is Fondazione Prada’s “The Boat is Leaking. The Captain Lied” at Ca’ Corner della Regina. The exhibition questions the very condition of the image, taken to its limit, to a place where reality and deception blur. Artist Thomas Demand, director Alexander Kluge and set designer Anna Viebrock pool their expertise, crafts and visions into a total work of art: an expanded carillon that drives the viewer into a labyrinthine reflection on our era of post-truth media.

Macel has repeatedly described “Viva Arte Viva” as a hymn to creation. The curator’s balanced, harmonious tune and clean musicality tend not to correspond with today’s distortion and asynchrony — as the collateral events by Samson Young for Hong Kong and James Richards for Wales demonstrate. In his site-specific “Songs for a Disaster Relief” project, Young appropriates a number of hit singles created for charity, redeploying and distorting them to describe the absurdity of a pop culture unable to get to the root of the issues it purports to address. Richards offers an immersive experience: a reflection on an inner landscape accessed by rites of initiation, here via a sampling of sounds for the spaces of the church of Santa Maria Ausiliatrice.

Shirin Neshat’s film Roja (2016) uses an alter ego to conjure surrealistic visions of the fear of the other and the desire to reattach to one’s homeland. This may be the most powerful work in her exhibition at Museo Correr, one of a larger constellation of monographic shows in Venice that includes the Italians Alighiero Boetti, Michelangelo Pistoletto, Ettore Sottsass, Marzia Migliora and Yuri Ancarani, as well as Marina Abramović, Pierre Huyghe and Philip Guston.

The exhibitions of Boetti and Sottsass are distinguished by the elegance of their settings (reflecting the collaboration with Fondazione Cini), while the shows by Migliora and Ancarani at Palazzo Ca’ Rezzonico and Café Florian respectively testify to the vitality of a mid-career Italian generation whose practices and areas of research are being constantly redefined.

The Philip Guston retrospective at Gallerie dell’Accademia frames the artist’s production within the literary and poetic milieu that surrounded him: from Lawrence, Yeats and Eliot to Stevens and Montale.

Palazzo Fortuny’s exhibition “Intuition” shares the Macellian discourse of the artist-shaman for whom creation is an uncontrollable act. The show is ambitious for the sheer number of artists included and the complexity of the installation; it presents works with a primigenial strength, such as Gilles Delmas and Damien Jalet’s video The Ferryman (Le passeur des lieux) (2016). Unfortunately the pieces are not always integrated within the whole, partly due to the building’s storied stratification.

Returning to Gilliam’s banners, their presence had the effect of highlighting the distance between the anesthetizing veneer of the biennale and the genuinely reformational spirit of the external exhibitions. This latter tendency is especially marked in the interventions proposed by countries whose freedoms are restricted, and by communities seeking independence or international recognition. A case in point is Taiwan, whose exhibition “Doing Time” at Palazzo delle Prigioni presents a small sampling of work by Tehching Hsieh, an artist whose envelope-pushing One Year Performances are always framed by a set of strictly self-imposed rules. Likewise, the project for the Native American pavilion, titled “Indian Water,” is conceived by artists Nicholas Galanin and Oscar Tuazon as a platform for cooperation and dialogue. Over the summer, the pavilion is due to host debates on the subjects of environmental catastrophe, seawater decontamination and global pollution — issues whose gravity has been magnified by Trump’s anti-environmental policies.

Taking a final step inside the Iraqi pavilion at Palazzo Cavalli-Franchetti, part of the official circuit of national pavilions, one feels ambivalence regarding history –– reunion and rupture, reverence and iconoclasm. Ancient artifacts, saved from looting at the Iraqi National Museum, and recent works, are displayed in showcases, reiterating both a distance between the work of art and the flow of life and the requirement for protection of the artistic object. At the end of the hall one encounters Untitled, Mosul, Iraq, 31 Oct 2016 (2017) by Francis Alÿs. This video, shot in the city of Mosul, films a hand that soaks a brush in a palette of ocher, earth and beige colors. With quick and determined gestures the artist tries to portray the Kurdish Peshmerga and the tanks that appear in the background. At a certain point the hand grabs a rag, scrapes off the painting and the action starts from the beginning.

It seems that the faceless author attempts to render an image both attuned to the situation and infinitely failing. This is because the world cannot be fixed in one form; but that does not mean, as Alÿs asserts, the artist can stop bearing witness.

(Translated from Italian by Alex Estorick)