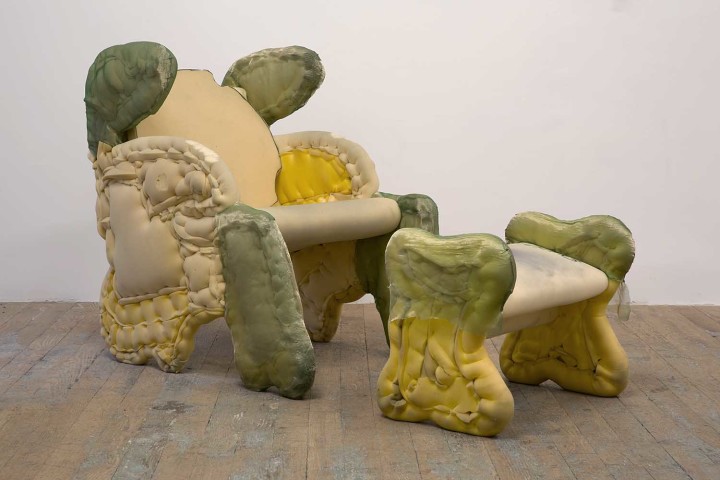 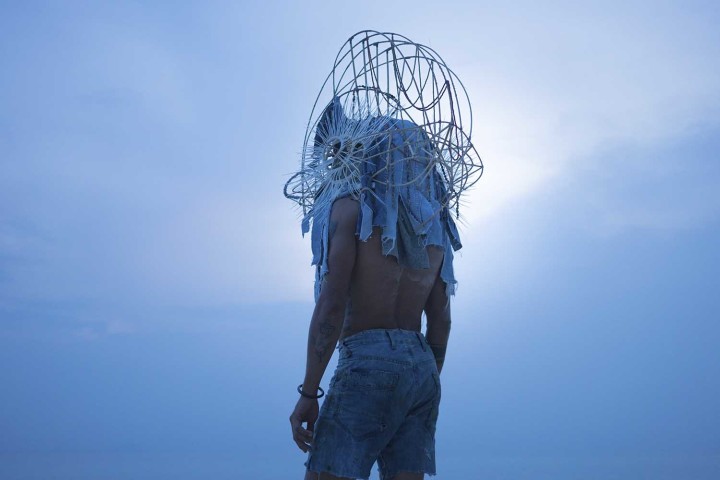 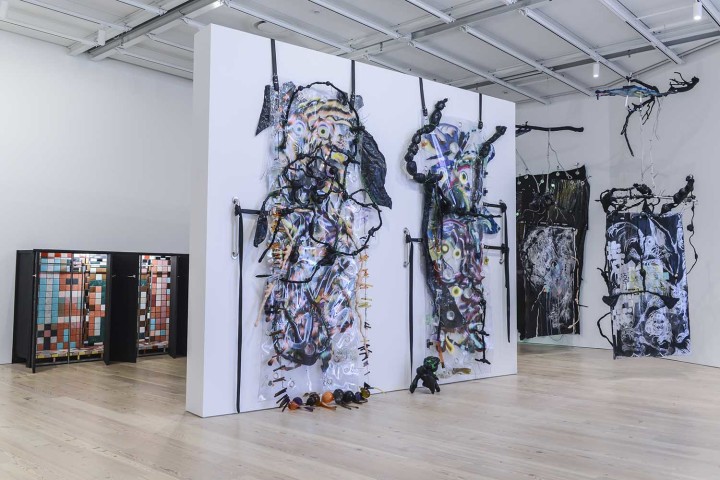 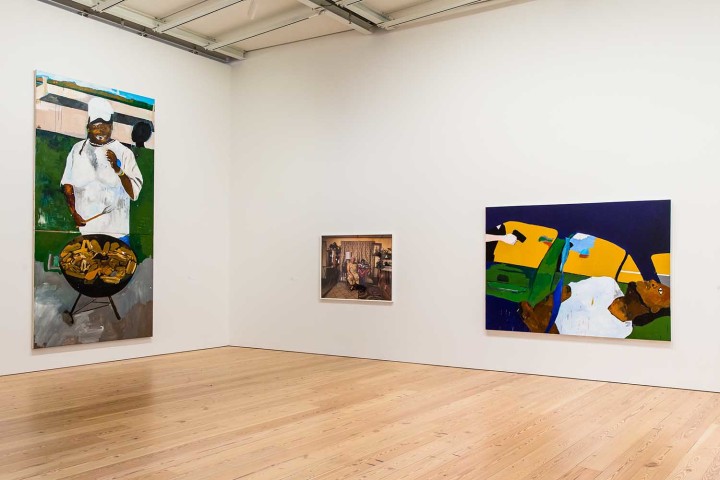 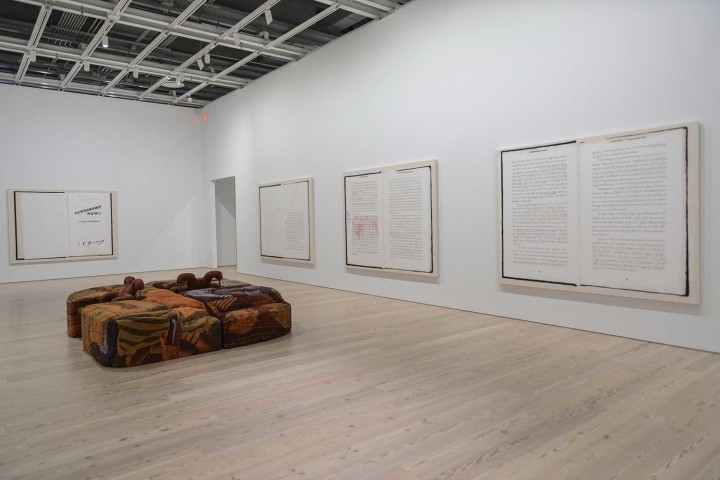 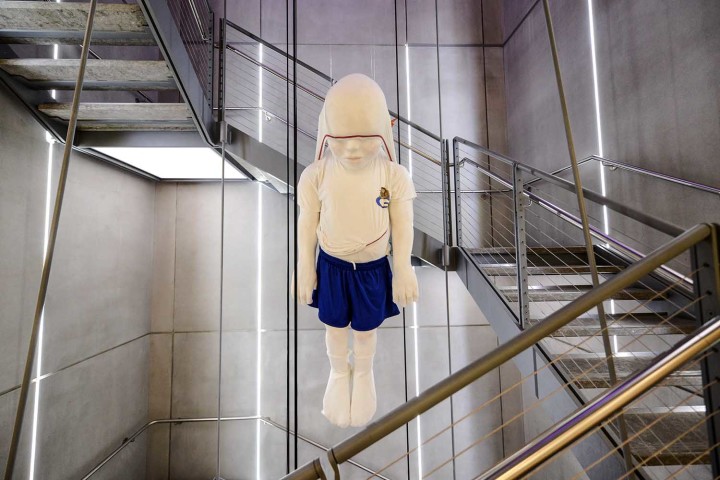 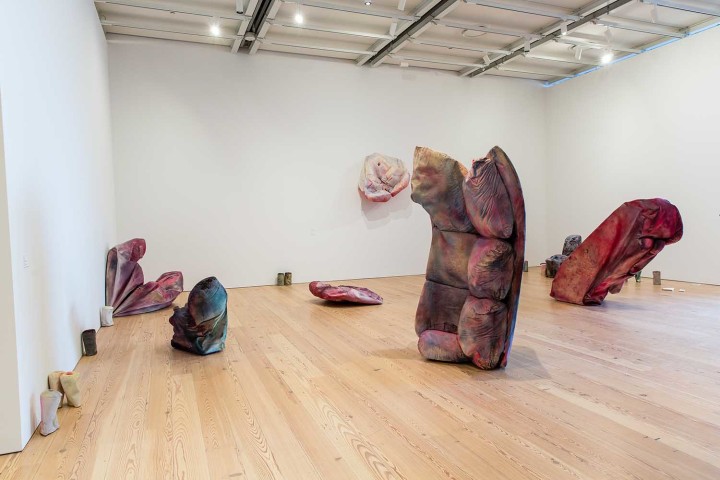 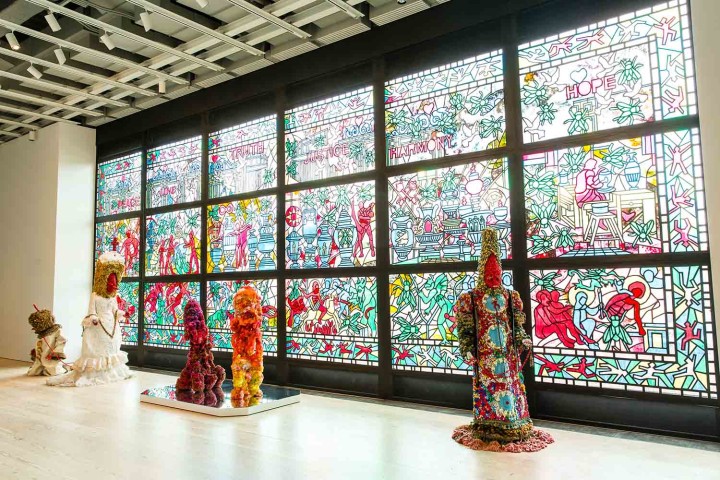 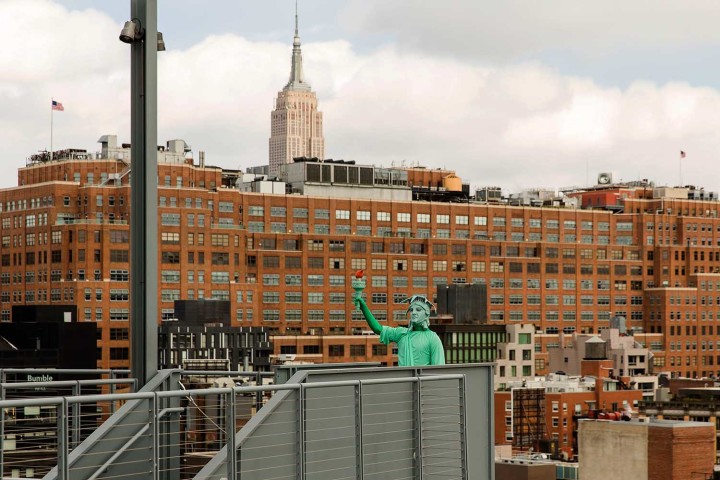 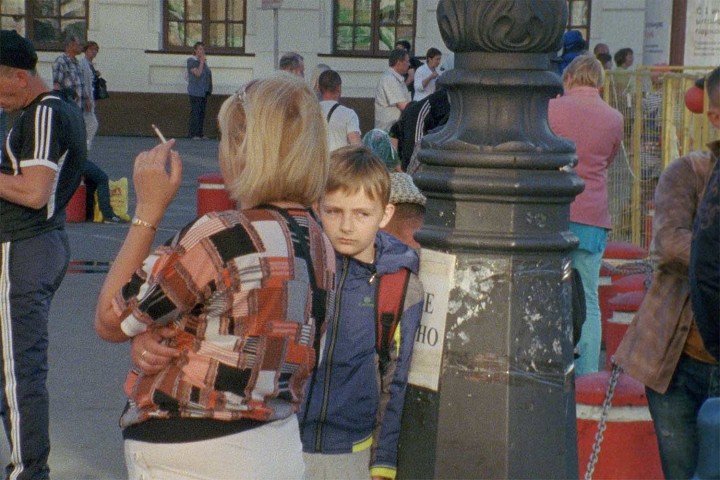 Hanging from the high ceiling of the Whitney’s glassy ground-floor lobby are the embroidered textiles of filmmaker and artist Cauleen Smith. Installed near to the museum’s entrance, they’re among the first works that viewers of this year’s Whitney Biennial are likely to encounter; more are installed in one of the exhibition’s central spaces on the fifth floor.

One side of each of Smith’s brightly colored textiles bears text in a looping cursive script, decadently rendered in velvet, satin, sequins and beads. “Rage blooms within me,” reads one work. “I cannot be fixed,” reads another. On each opposing side are graphic figures and heraldic designs composed of a private iconography of eyeballs, eight balls, hearts, diamonds, teardrops and drops of blood.

Collectively named In the Wake (2017), the textiles share a title with a book published last year by feminist scholar and historian Christina Sharpe, subtitled On Blackness and Being. The book’s central image — that of the wake trailing behind a ship — lends itself to the long contemporary afterlives of transatlantic slavery, equally invoking the wake as a mourning ritual and a coming to consciousness.

The Biennial’s wall text describes Smith’s pieces as “banners to be used in a procession,” an offering informed by “the artist’s sense of disgust and fatigue when confronted with video after video offering evidence of police violence against Black people.” Last September, Smith organized one such “Black Love Procession” in protest of an exhibition at Chicago’s Gallery Guichard, where Ti-Rock Moore, a white New Orleans artist, staged the scene of Michael Brown’s death as an art installation. Photos of this work are especially grotesque, and include a figure in the shape of a man lying prone on the gallery floor.

Smith’s procession gathered a twenty-odd group of people to march on the gallery in the spirit of honoring and caring for black communities. “We just wanted to tell our folk that we loved them,” Smith said in a Hyperallergic article. In a review of In the Wake: On Blackness and Being, artist and writer Hannah Black writes that “mourning can be and has been a politics, but it must avoid becoming only a litany of horrors. Refusing melancholy in favor of care, In the Wake understands mourning as a practice embedded in living, and vice versa.” In the wake of a white artist trafficking in black suffering, Smith’s banners seek redress. One reads, “We were never meant to survive,” while another, chillingly, says, “My pathology is your profit.”

That the exhibition foregrounds a black artist’s lyrical and explicit criticism of the way that images of brutal anti-black violence are exploited by white artists and curators will no doubt come across as a tortured irony to those who have been following media coverage of the Biennial from the past few days. Among the works included is Dana Schutz’s painting Open Casket (2016), based on the brutal 1955 photograph of the corpse of fourteen-year-old Emmett Till in his coffin. I’m mentioning it here only briefly, as other longer and better analyses of the violence in this gesture already exist. Hannah Black addressed a generous and widely circulated open letter to the Whitney, stating that “those non-Black artists who sincerely wish to highlight the shameful nature of white violence should first of all stop treating Black pain as raw material.” Writer and artist Aria Dean published a long, lucid response on Facebook. Artist Parker Bright, wearing a T-shirt with the words “Black Death Spectacle” written on the back, staged a protest in front of the painting on the first day the Biennial was open to the public. I want to echo one of the demands of these artists: to the curators, Christopher Y. Lew and Mia Locks, this painting should be taken down. This is what a token gesture of accountability might look like.

What does it mean for a curatorial politics to be so baggy and so vague that it accommodates, in one gallery, a challenge to the translation of black death into spectacle, and then goes on, in the next gallery, to restage that same spectacle? The curators’ didactic texts make reference to “a turbulent world” and a “time rife with racial tensions, economic inequities, and polarizing politics,” but their disingenuousness shows.

In light of this, a question I keep returning to is that of the frameworks by which the art world and its actors can be held accountable. Does the art industry even have models for accountability that move beyond the discursive and into the actionable?

Two artworks in the exhibition foreground the material infrastructures of the Whitney that make the fact of the museum possible; both of these offer ways of thinking about institutional accountability. Both formally understated works, they risk being overshadowed by louder activity in the gallery space. This is especially the case in Cameron Rowland’s Public Money (2017), which consists of a simple grid of wall-mounted, framed, Xeroxed legal documents, accompanied by an essay written by the artist. The artwork’s listed materials, however, are “institutional investment in Social Impact Bond,” where a Social Impact Bond (SIB) is a contract between the state and private investors that financializes social services.

SIBs are very new, as a financial tool, so little evidence of their effectiveness in public life exists. They are created when a private investor puts money toward a quantifiable “social” objective, such as, for example, recidivism in Ventura County, California, prisons, which is the purported purview of an SIB in which Rowland has had the Whitney invest $25,000. If the investment achieves its stated goals — here, a reduction of the number of inmates who return to prison within a certain time frame after their release — the county government pays back the investors, with interest. If the investment is unsuccessful, the investors assume the losses.

Operating a recidivism project with private funds takes away whatever slim measure of transparency a state organization would normally be required to provide to its publics. Information about how exactly people will be kept out of prison, how the effectiveness of the program is measured, etc., is available only to investors. The Ventura County SIB focuses on providing individuals with a privately trademarked form of cognitive behavioral therapy, emphasizing, as Rowland explains in his contextual essay, “the personal responsibility of prisoners for their arrests, rather than changing policy to reduce arrests, convictions, or sentences.” Rowland’s investment in the SIB gains him access to details about how the process is managed; after the five-year term of his nondisclosure agreement expires, he will make this information public.

Adjacent to the Cauleen Smith banners in the museum’s lobby is Park McArthur’s Another word for memory is life (2017), composed of two aluminum panels painted an officious shit-brown. (Also like Smith’s works, more of McArthur’s panels recur in the museum’s upper galleries.) Their design is familiar: following the standards described in the Manual of United Traffic Control Devices for road signs indicating cultural sites, the panels are constructed from one-eighth-inch-thick aluminum with rounded radius edges and are painted Pantone 469. The space of the sign is blank. Installed directly above the museum’s ticket desk, their lack of information reads like an intentional measure of opacity, something meant to be signaled but ultimately withheld. Rather, the style protocols that divide official culture — such as the Whitney — from unofficial culture are themselves on display. McArthur’s works stress that cultural events like the Whitney Biennial can, like roadside style protocols, intentionally misrepresent the ideological (whose culture?) as the politically neutral. Such groundwork is necessary before discussions about institutional accountability are even possible.