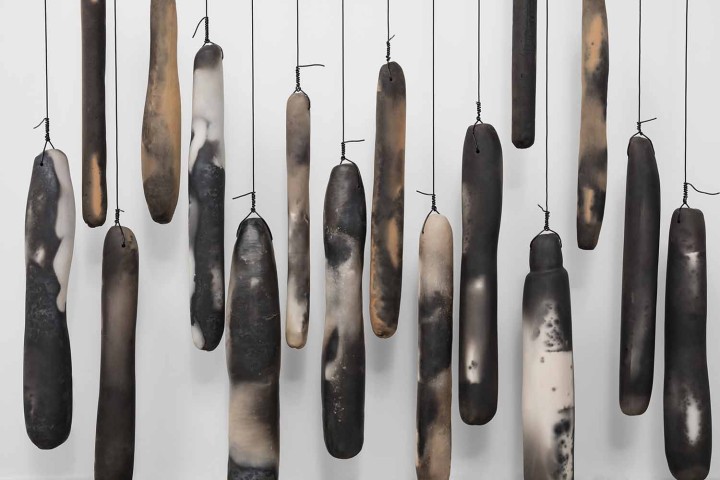 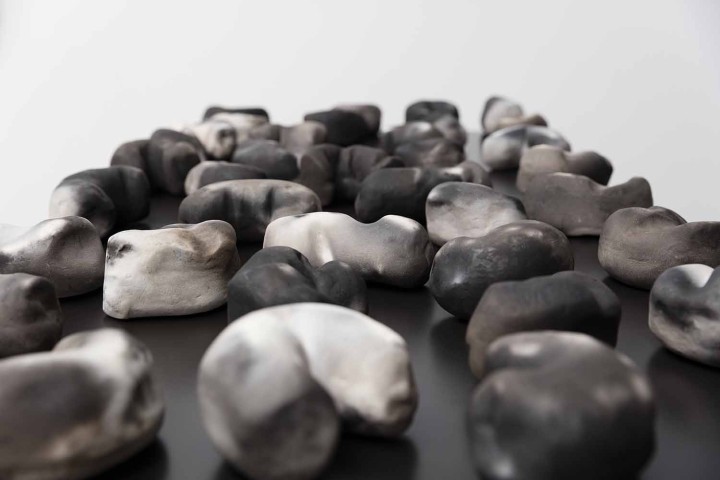 The history of culture runs through the work of Anna Maria Maiolino; her marks are an exploration of the basis of being human. In her first exhibition in Switzerland, the rooms are filled with drawings, sculptures and videos, and yet lightness is the feeling that dominates.

Maiolino is an artist who basks in neutral colors, at times seeming to hide behind their associations with Conceptual art and Minimalism to gain meaning. In two series of works on paper, the sparse use of deep color is remarkable. In the “Aguadas” (Watery, 2016) and “Filogenéticos” (Phylogenetics, 2015–16) series, the acrylics and inks float with their loose handling, appearing to hover between paper and glass. A harsh cadmium is perhaps the most striking I’ve ever seen. Like freshly spilled blood, it gives life force and vitality to an entire room. Its memory lingers throughout the exhibition.

The four drawings from “In-Moto II” (In Motion II, 2014) are rigid compositions formed from hard lines in permanent marker. They look stitched together rather than drawn, and recall aggressive barbed wire or passive embroidery depending on the distance from which they are viewed. This ability to shift one’s way of seeing her work is constant. The series of “Hilomorfos” (Hylomorphs, 2016) are gourd-like bronze masses attached to poles connecting to circular bases. They visually relate to classical busts, and their human height allows their floating visages to be confrontational. Named after the Greek philosophical idea that matter and form create the physical, they appear in the process of becoming.

Seven videos play in the final room, a forty-year survey of Maiolino’s time-based work. The most recent entry, Sotto Voce (2016), is a key to the exhibition. Here white text against a black background scrolls like screen credits, slowly charting a first-person narrative that mixes the universal with the personal and fantastic. With a slow voice-over translation from Portuguese, the sound becomes one inside your head. Here the artist considers her place as a goddess, a woman and an artist. As an explorer of identity in physical and conceptual terms, Maiolino reveals an ability to abstract culture and image toward the prehistoric. It feels very relevant.