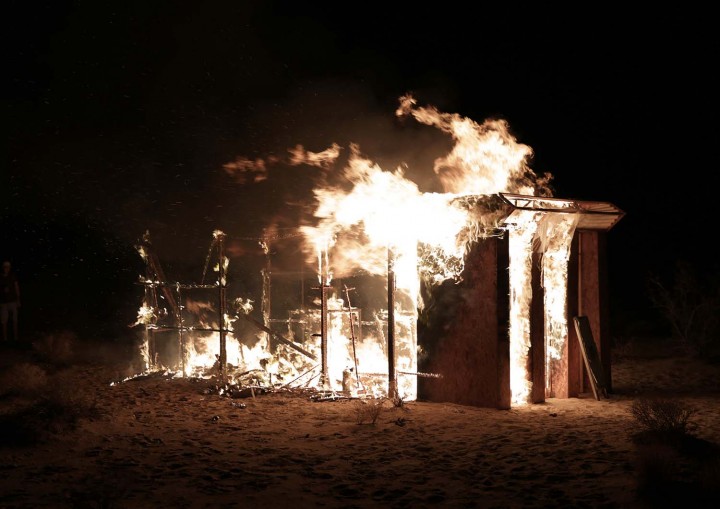 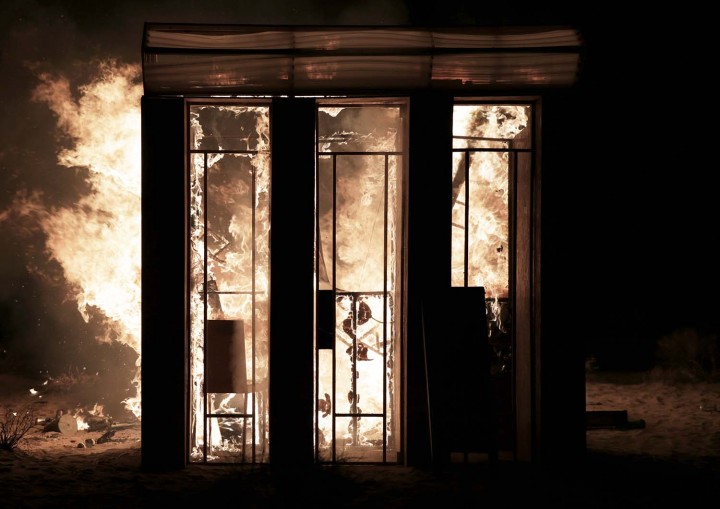 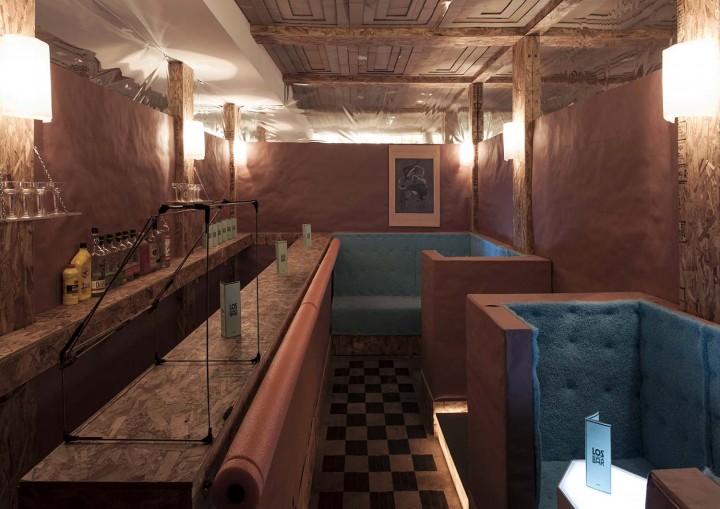 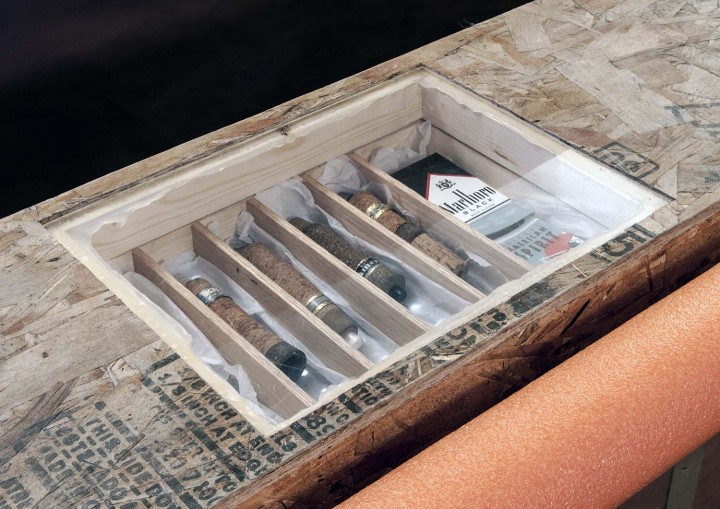 It took about fifteen minutes from the hurling of the first Molotov cocktail for Los Bar
to reduce completely into a crackling field of embers. It was a blunt coda to a project that had provided a steady rhythm through the summer in Los Angeles.

Every Friday since the end of May, growing crowds had been congregating in and around a studio at the Rudolph Schindler-designed Mackey Apartments, transformed by MAK Center residents Christoph Meier, Lukas Stopczynski, Andreas Bauer, and Robert Schwarz (the former an artist, the other three architects) into a 0.65:1 replica of Vienna’s Loos Bar. Their bar was smaller, so they called it Los.

In the early days they slowed the music down according to the same ratio. But more than a kind of proportional fidelity, the playing with scale at Los Bar seemed driven by an appetite for physical awkwardness, a slapstick re-scripting of social interaction and of that between people and a built environment. Loos Bar is already quite small—Los Bar comically so at 2 ½ x 7 meters. You could pack in maybe forty people—and they often did—but even with ten inside there was barely enough room to pass by those lucky enough to have grabbed a spot at the bar, and only the tiniest of asses could comfortably rest on the seats of the banquettes. Weekly performances, on a 90 x 75 cm stage, often overwhelmed the bar with sound, precariously performing the space itself.

And there were plenty of gags built on unwieldiness: they served their signature cocktail, the TGV, a repulsive mix of several liquors, in plastic cups affixed to cumbersome concrete plinths. A “secret” bong built into the bar itself required two people to operate, and even then it wasn’t easy.

So when the four collaborators disassembled the bar and rebuilt it as a freestanding structure in Wonder Valley, where it would be burnt to the ground after one final gathering, it was again a play of scale: a shack engulfed by the empty expanse of the desert. Unless it wasn’t a tiny bar but rather—built of MDF, cardboard and paper—a very large architectural model.

The details—clever, sometimes whimsical—revealed themselves at each turn of the head: the banister at the bar made of a foam swimming pool noodle, the checkerboard floors in duct tape, wall sconces of packing foam and the banquettes upholstered with HVAC filter material. The elegant touches of Adolf Loos reimagined on a Home Depot shopping spree. Every week new elements were added by the creators of Los Bar and increasingly by visitors as well—not only in the performances but also in the material and décor of the bar itself. Matchbooks, ashtrays, texts—as these additions accumulated, Los Bar became increasingly protean, assuming multiple meanings.

The Loos original, officially the Kärntner Bar, is also commonly known as the American Bar. Both names appear above the entrance—the former on a glass prism with crystals in the form of the American flag. The notion of an American bar—as opposed to a café or Weinstube—in fin de siècle Vienna was of a place to meet and drink not segregated by class. If class antagonism has everywhere in the developed world long since taken on a subtler, more American style, the burning of Los Bar in the Mojave suggests another process of Americanization implicit in the project.

Schindler had studied with Loos before moving to Los Angeles, where he introduced a mode of domestic modernism that would develop into a Southern California architectural vernacular. Those buildings, in turn, fell out of favor before—inevitably—returning as a fetish, stoked by the skyrocketing prices of a now resurgent real estate boom. Heads shake at the thought of Schindler, Neutra and Lautner houses demolished during that benighted interregnum before this stuff became fashionable again. There are coffee table books and tours devoted to LA modernism for those not lucky enough to live within such sharp angles and clean lines. This, of course, marks just one of the countless afterlives of modernism—a trivializing aesthetic commodity, a fetish whose flimsiness becomes all too apparent when set aflame.

In one of those calendrical coincidences, the reassembly and burning of Los Bar—culminating on the night of September 11—coincided with the anniversary of the Destruction in Art Symposium. Held in London in 1966, the conference brought together artists involved in Fluxus, Happenings, Vienna Actionism and Concrete Poetry among others who—the vast differences notwithstanding—saw destructivity as intricately connected with creativity. The implications are obvious, and, sure, maybe the incineration of Los Bar marked its consummation. But next Friday will be a little boring.