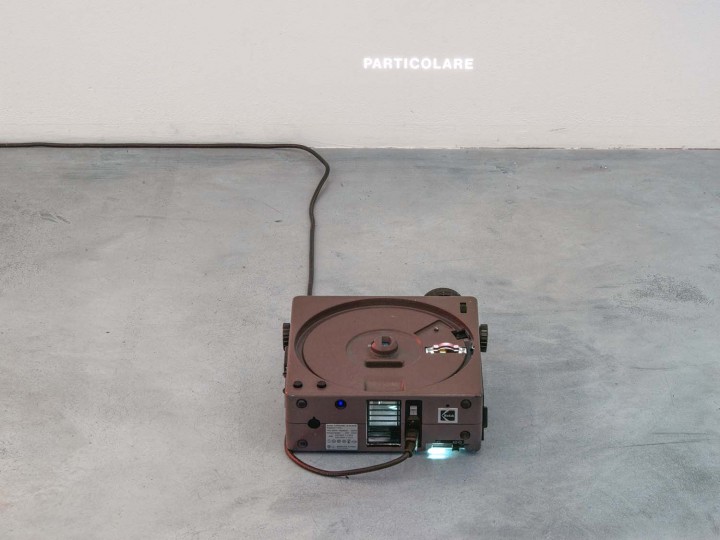 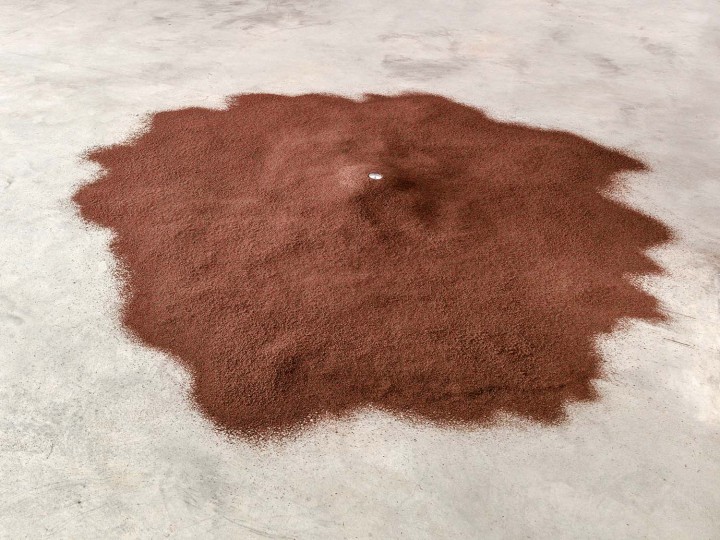 The art of Giovanni Anselmo, now in his eighties, has an air of empirical objectivity that is belied by its persistently directing us beyond its material parameters. Minimal and conceptual idioms prove to be Romantically inclined. “Oltramare” means both “ultramarine,” as in the blue pigment, and “overseas.” Oltramare appare (1978–2015) is a blue rectangle, painted with slabby thrusts of a palette knife onto the wall. The title’s double meaning defines it as an area of raw material as well as an abstraction (a rectangle) and a symbolic window onto an elsewhere. Its materialism is contingent on its illusionism. The palette knife stabs are both the waves on a blue sea and an index of performative process. The blue rectangle even comprehends an allusion to Yves Klein’s International Blue monochromes of a decade earlier.

The word “PARTICOLARE” is projected onto the foot of a wall or across the gallery, materializing on your leg as you pass. It means “part” but seems to contain a sense of the word “particle.” Light, the quantum physicists told us, is both particle and wave, both substance and energy. Anselmo has the word reflect on the medium that makes it visible (VISIBILE is a word he projected in a 1971 work), suggesting that we are looking at a material (present) as well a part of a whole (elsewhere) it can only negatively invoke. This is the defining modesty/extravagance of Anselmo’s art. He requires an evidential basis he can establish in order to taken an imaginative leap into the unknown. Apparently, his fascination with the properties and metaphorical implications of light began with an epiphanic experience in 1965 when he climbed the Stromboli volcano at dawn and found his shadow cast upwards towards infinity. While earth finds its bearing (2002–2015) is a mound of soil with a magnetic needle embedded in its crest, an image of the volcano’s orifice that places it at the center of an anecdote at the same time as pointing away to a remote time and place that leaves the work as a merely symbolic sieving of soil onto the gallery floor.

Born in Cologne in 1936, Joachim Bandau’s early experiences of war-torn Germany undeniably shaped his later fascination with bunkers as…

What is „Hinter Winter“- literally: behind winter? A cold behind? Or spring? The small poster advertising the exhibition shows a…