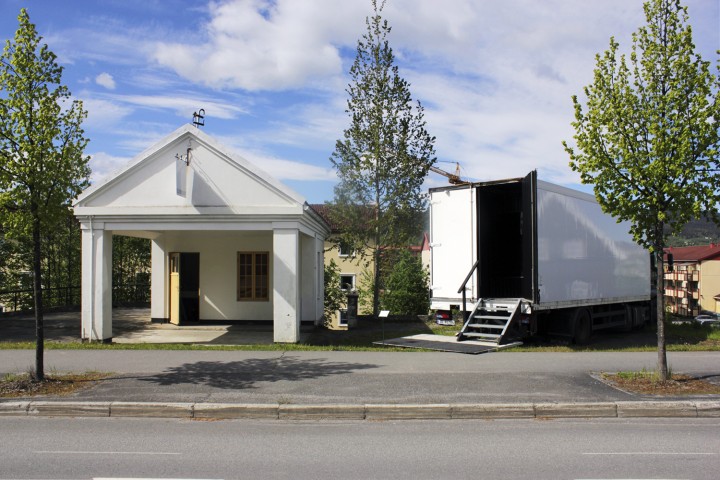 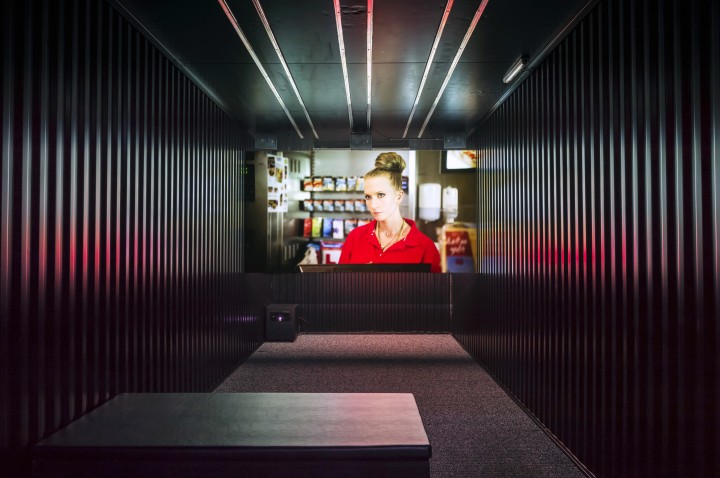 Lillehammer is much smaller than I thought. The fame of the 1994 Winter Olympics and the recent American/Norwegian TV series Lilyhammer eclipses its size.

Elephant Kunsthall, housed in a former filling station, is so tiny it could be a joke. But it sure makes the most of it, in particular in its most recent exhibition.

For this, Kunsthall director Mads Andreassen brought together a very interesting group of artists. Hugging the main exhibition space — so small it feels crowded with three people — is new work by Annamarie Sigmond Gudmundsdottir. Known for elaborate wall drawings of architectural dimensions, the line drawings presented here, executed in acrylic on paper and hung to powerful effect on scarlet walls, could be regarded as deceivingly simple and comparatively small. Still, they nearly fill the entire space with a stark, sculptural presence. They are based on whimsical doodles that the artist transformed into larger drawings, but they retain the fluidity and charismatic absurdity of a first sketch — such as the one in which, inexplicably, two birds face each other, tucked under the blankets of a conjugal bed. Another drawing is shown in the raw basement downstairs, along with two lights placed on the floor, which on opening night illuminated the mesmerizing performance of Nils Bech, rendering his songs of love and longing in a rather bleak light.

Parked outside the filling station and nearly dwarfing it is Knut Åsdam’s mobile video installation Mobile Egress (2013–2015) — basically a black box in a truck. Here it is a temporary contribution to the Kunsthall’s sculpture park, Andreassen’s ongoing project to develop the derelict backyard around the filling station. Putting Mobile Egress here is a stroke of genius: the beautiful video inside the truck focuses on the goings on at a modern filling station, riffing on micro- and macro-economies, from the personal emotions of the employees to Norway’s complex relationship with oil. Only one year after their inauguration, the Kunsthall is up and running, popular with locals. It’s fun. Even the guys discussing their muscle cars in the parking nearby are curious; they’ll stop by soon.

What did I bring back from my visit to this exhibition? Most probably the memory of falling asleep three times,…