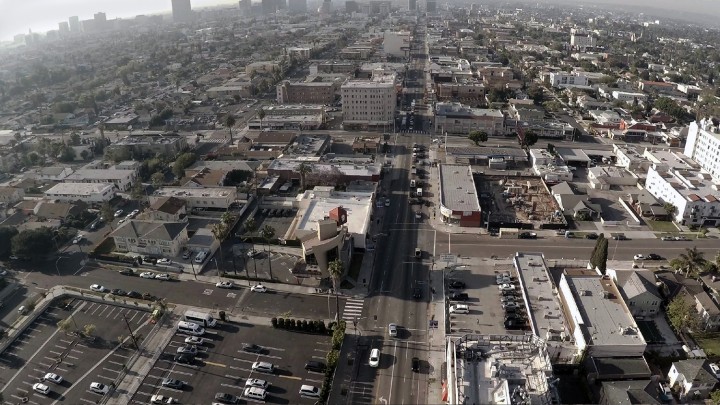 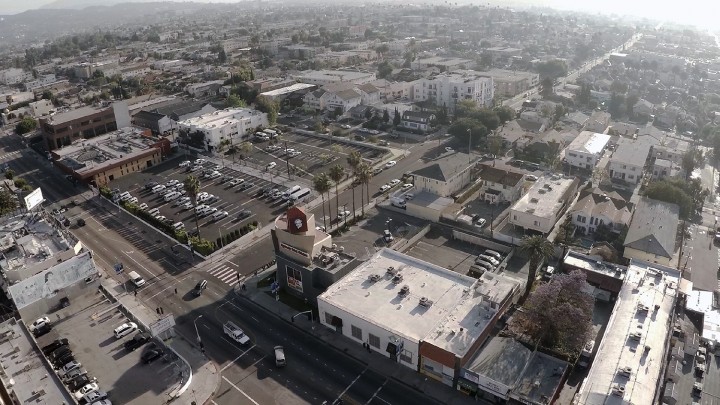 Residents of Los Angeles may be familiar with the peculiar KFC franchise located at the intersection of Western and Oakwood Avenues in densely populated Koreatown. Its deconstructivist design presents an architectural anomaly amidst the cluttered strip malls of East Hollywood. The building serves as the subject of Asha Schecter’s The Bucket, a single-channel video projected on one wall of Metro PCS, a storefront-cum-gallery that, like the architecturally ambitious KFC, manifests a high-low amalgam of commerce and culture.

Recorded with a Phantom 2 drone and a GoPro Hero 4 camera, the work treats an otherwise eccentric specimen of the fast food chain with documentary restraint. The end result may not astound “prosumers” or seasoned hobbyists but it is clear that the artist is not interested in cutting edge videography or technical exhibitionism as much as framing the relationship between that which is being recorded and the mechanism that records. Indeed, the building under surveillance, designed in 1988 by apprentices of Frank Gehry, borrows and updates features of “Googie” style architecture, LA’s coffee shop vernacular of the McLuhan mid-sixties.

In The Bucket, the medium is not only the message but also our protagonist. If drones provide access to the city’s landscape unimpeded by grids or gravity, Schechter’s work seems to frame the less perceptible operations of the image and its shifting modes of transmission and reception by treating these new forms of technological mediation with a Structural-Materialist tint. But how does one locate materiality within the immaterial space of digital video? Schechter finds it through subtle spatio-temporal stutters. While the camera makes its way around the building in steady waves of ascent and descent, at moments the image surface vibrates, almost imperceptibly, with digital disruption. Shadows and light shift illogically, while parked cars and figures appear and disappear with troubling fluidity. In one instance the drone hovers above the second-story patio, not quite capturing its reflection in the window of the empty restaurant, and the viewer is suddenly confronted with the camera as an object rather than a transparent means of vision. The soundtrack—an incessant buzz, machinic and guttural—also evokes an unsettling kind of interiority, a menacing will or intelligence that is not quite the viewer’s, not quite human. Perhaps an insect or bird, maybe even a chicken. The latter, of course, is not meant for flight but feast. Such irony is not lost on Schechter, and these nuances serve as insightful reflections on how we produce and consume our images.