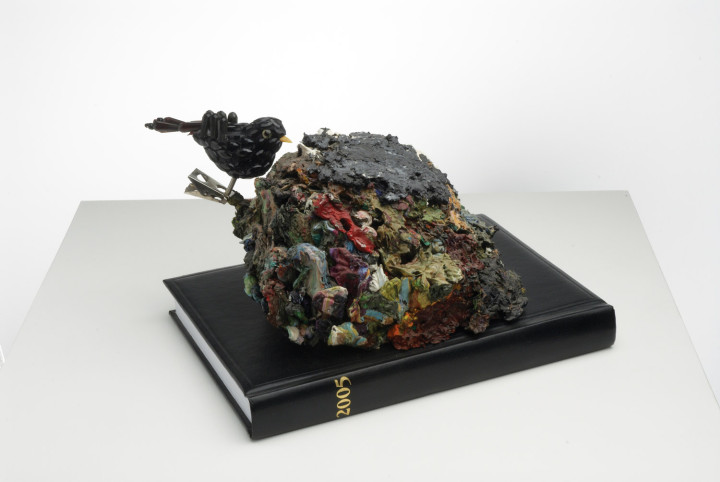 Neville Wakefield: I was intrigued by this idea of what an interview delivers.

Victor Man: The expectations around it…

NW: Exactly. That somehow the expectations that may be unfulfilled in the work can be substituted in the interview.

VM: Yeah. When you do an interview you feel like you’re in a ring of fire. A ring of fire in which you just have to stay as much in the middle in order not to get burned.

NW: What were you saying earlier about Fellini?

VM: It was about the idea of the interview or press conference. He was wondering about press conferences; why not, instead of talking, to just sit there, exchange smiles, and eventually presents too; this way we would all have so much more of a pleasant time together. We should exchange some presents.

NW: I like that idea. I’m intrigued by this notion that you make work that is in some ways intentionally opaque and resistant to a singular reading, and yet you yield to an interview which invariably is looking for some kind of revelation through sound bite.

VM: Yeah, I think that is the idea around a work that is, in a way, truly abstract. You don’t know what you are actually looking at, you don’t know what to do with it, rather than just having to deal with its disorienting subject. You need some time to spend with it or wait to see more work to get a sense of what it might be all about. The idea of the interview is to find what you can’t grasp directly from the work; also an interview for many people is more of an enjoyable reading than an academic text. It’s hoping for some kind of revelation of what the artist is like; he becomes a subject. I don’t know if this kind of confession can be a solution for the world.

NW: It’s a very catholic notion. Maybe I can be your priest.

VM: Yeah, but then you have to promise not to tell anyone about my fears.

NW: [Laughs] What are your fears at the moment?

VM: About telling maybe too much in this interview, a declaration or confession. I’m going to Arezzo tomorrow to see the frescoes of Piero della Francesca, and coincidently this trip is about something there that has to do with confession. Well, a kind of confession. Because there is this horse head in Piero’s fresco and someone has carved upon his forehead a name, Giuseppe Sacchi. I was very intrigued by it. By what this gesture is, what this might try to confess. So I looked into it more and found that there was a painter named Giuseppe Sacchi; it’s crazy to imagine that he inscribed his name over the horse’s forehead. He was the son of a famous baroque painter, Andrea Sacchi. Giuseppe died very young so he never fulfilled his artistic dreams, if there were some. But what’s left is this weird scenario that he might have been the one who made the graffiti over Piero della Francesca’s work, as if on the forehead of a Golem.

NW: Wow. Are you interested in the graffiti itself or more in the way one’s identity is written over another?

VM: I’m interested in finding out more about why someone would write his name over the forehead of a horse; what he was thinking of or trying to achieve by doing that. Imagine there was a painter who actually did this, to a masterpiece. But maybe it’s something more complex, and might have to do with gaining a sort of power from it. Like with a Golem. However, maybe I’m completely wrong and his gesture was quite the opposite — it might have been a kind of reverence.

NW: It’s interesting what is held in a signature, the amount of information. I’m thinking about the way in which artistic identity is condensed. The way that perhaps people understand the work of Victor Man as belonging to, or being representative of, a certain type of painting or a certain type of installation. It’s interesting the extent to which all that information is held in the signature, even when the signature is a style.

VM: What you try to do is to locate what is fiction and what is fact.

NW: Is that a distinction that matters to you?

VM: Well, I think it’s something the work can provoke. I would say it doesn’t matter for me what is fiction and what’s fact, because in the end it’s part of what we are talking about here. If you are lead in a certain way you take something else away with it. In the end it’s not so interesting to have an answer which is interesting to hear. You take something which might be from very near to you, very personal, very private, and you transform it into something else, you transform it into a fiction. You go with it. And it becomes what it becomes. But in the end, who cares?

NW: The audience cares. It’s interesting because we came at this talking about opacity and how your paintings resist meaning, and then I’m asking you to bring meaning to them through this interview and through this process of discovering more about you and more about what you think. Does autobiographical detail matter to you?

VM: I would like to stay in the place of shadow because it doesn’t matter at all, and sometimes it’s funny how certain people can identify with certain aspects of the work and they think I have a very clear connection to what the subject matter of some work is. It happened to me in Miami; there was this guy dressed as a drag queen and he came up to me trying to insinuate that we shared this common fetish. I turned red. It’s like when you go to a movie and you identify with the hero; when you leave you feel you are strong enough to try the same karate tricks you saw earlier. Or when you have a baby and you are confronted with buying a pushchair, you suddenly start noticing all the different pushchairs on the street… what kind of wheels they have, the forms, the sizes… these things you just wouldn’t previously be sensitive to.

NW: It’s the doors of perception. Most of the brain’s activity is excluding visual stimulus, taking it away; to use your example, you don’t see the pushchairs until you need to see them and then you start to identify with them.

VM: And suddenly it becomes a preoccupation, and it can turn into a passion!

NW: I think it’s also about the particular way the empire of signs operates. Looking at your work, what I gain from it are these archetypal images — but they don’t seem attached to the archetypes that I necessarily know.

VM: They are kind of residual things. You are left with them and you just don’t know what to do with them. They gain this quality of the leftover. You try to look back but you don’t really know where it has come from. So you can’t really push it back into it’s own niche.

NW: Right, there’s a discarded quality to them, a twilight quality that suggests to me that they had some use value but now they have some other meaning. And I’m never clear what that meaning is.

VM: Then we ask ourselves the question, when does disorientation become clear here?

NW: How do you find this disorientation? Do you seek it artificially through drugs or naturally through landscape and loss?

VM: No, I’m disorientated day by day. I have to go and do everything on my own… sometimes it’s too disorienting. Everyday I try to set up a practice and establish a frame within which I live, besides the times when I travel. This frame is like a guideline on the road.

NW: Do you paint everyday?

VM: I try. I can’t say that I paint everyday but I’m living with it every day. I’m dealing with other kinds of works that are not directly objects or installations but somehow come together. It’s like living in a village with these things around you, and then sometimes you allow yourself to go on a trip. You experience other things that make you want to return to your daily frame with other ideas. There are artists who are very productive. They continually produce and that formulates the way their art is. There are other kinds of artists who are really living with the work and it takes a long time to get to a form, and it takes a lot of canceling to reach it by permanently canceling things. And sometimes you have to live with these things for a good amount of time in order to be sure they can keep the same energy from the beginning, which we know can easily be lost.

NW: Or maybe fortunately… Is the work then about killing time? And, if so, is that simply another way of preserving it?

VM: You see, the work is more like a mirror; it can only continue as long as you look into it. This is the best thing that “killing time” can offer — its reflection — and you can always turn around.

NW: Is that then the revelation that the interview has been leading to all along?

VM: I would say it’s more of an attempt to fill a gap left open between truth and falsity. A sort of Jabberwocky.

Victor Man was born in 1974 in Cluj, Romania, where he lives and works.

Maurizio Cattelan: So, you’re in Detroit at the moment? Hernan Bas: Yup, the house I bought up here is almost…

Yael Bergstein: Over the last few years your work has transitioned from installations featuring scenes of fixed occurrence to installations…

Nicola Trezzi: Daniel, when I approached you about this feature you replied saying the title was a pertinent issue for…