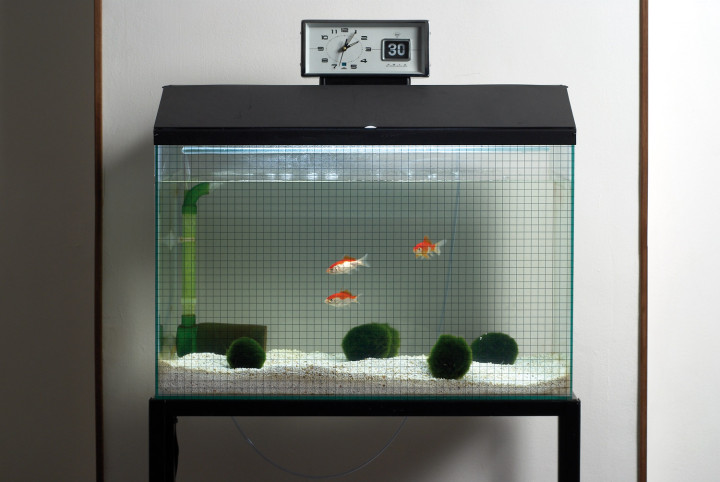 Hour-by-hour another filmstrip skirts across the opaque plastic surface.

Never quite finding the image or images that I really need. An aquarium in the gallery, perhaps another wasteful illumination. Depicting duration and growth. Daily, observing and photographing the growth of fish within rectangular panels of glass; the front panel conveying fictional Georgian wire. No more racing in circles — just pacing within lines of a rectangle.

Why was it that I always used the words fishnet wire in preference to Georgian wire? Either prefix would work, but somehow the connotation of tights, or furthermore legs, felt more suitable, especially when considering the fourteen-hour scratch-frenzy on a cross-continental flight. Perhaps more so because it directly brought my attention to a 5×7 photograph of Miss T on a high-speed bullet train. A much shorter duration, but a fixation only loosened by the knowledge of potentially capturing and transferring an image of desire into a more contained image of the past, depicted by the contours of a concrete slab. Those legs with the black-white-black glossy shoes, reflecting off the metal base of a seat. A white umbrella protruded from her waist, with the handle propped against the back of a fellow passenger’s chair, in the place where my memory reinstalled the entertainment notice of a fourteen-hour flight. With one leg inverted and the other projected, I reached for my camera. The projected leg edged its way towards my sought-after-image, balancing the corners of the frame against my unfolded coffee table… Focused. Composed. About to push further, feeling more agitated as the smell of the carriage began to remind me of the many occupied elevators of my past; elevators all somewhat slightly perfumed. Images of plastic, shoes, canvas, cotton, metal, legs… and the coffee cup beneath my field of vision began to overwhelm my focus — scent, 3 up and 3 down — ground floor — exit — Bing — doors opening — shutters closing — Clank — Exposure, completion.

End of a roll, rewinding. Fast approaching final destination, end of the line. Beginning of a new line.

21:43. Tourist views of Yokohama by night. Reflections of marketing brands from the interior entertainment spaces, creating muddled wordings that endorse blue marking. Bench and passageways at dusk, adjoining the elevators and entrances of a monolithic slab. Concrete slab more than slightly elevated off the tarmac. Illuminations and light fixtures. Safety and longevity. I assume the remaining few images are still stored upright in the blue-white plastic archive box, labeled: Roll #22. Yes. Dual washbasin depicted. Tiles tilted/distorted. Same image aligned differently. Correct exposure levels. Window panels depicted in the top left-hand corner of each frame. Gallery interjection: Dual window panel, painted emerald green with a dash of off-white. Rain formation altered, now upright or downright downpour. Both windows opened outwards. Dual mirrors depicted. Reflection caught without my gaze. Absence of glass’s orientation. Bars painted white installed within the windowpane outlay, one singular panel of glass elevated. Parallel to the ceiling. Filthy water smearing against a stone riverbank. Cockles crushed or fishbones diced; oil skinned or healthily brimmed — I really can’t decipher that image. Boat. Harbor. Pictorial. Pleasing. Memorable on two accounts: that of teenage of loneliness and longing for familial luxuries during the summer of 2001, and that of enjoyment while retrieving an image of that location during the summer of 2008. Despite the image’s inherent sentimentality it will not be selected for further consideration.

14:23. Crashing and relocating… fast-approaching 5 am.

Sleep, within an air-conditioned ruminating room of immediacy. I embraced the prospect of departure. I looked to my right, it must have still been early — I reached for a wine glass placed upon a small stool. A glass, a third full of stagnated water — lifted from the rubber surface and in doing so, a gentle ting awoke the space. Ting — which resonated as a lift-off siren enthused contently as punctuation mark: completion. I leaned forward and peered into the line where the base of the wine glass touched the rubber surface. I wanted a 2.7 second recording of that ting; resultant of several hours placement, one that was broken only moments before. Another day perhaps… another placement and another hold. I clicked the button from hold-on to hold-off. Anticipation. Nose to the glass, ear to the recorder I ceremoniously lifted the glass off the rubber surface and awaited that complementary endnote.

Roll#17: Transformation of an endnote. A shudder or a camera shutter to welcome an arrival. Passing through the gallery doors. The gallery cold — a quick glance at the flick-clock time display; it’s time to finish my packing. I continually double-checked the lay-out and cleanliness of the gallery; racing in circles and up and down, in search of nothing other than an affirmation of my extra-cautionary neurosis. I attempted to leave, but even this procedure of departing was a prolonged one. First, my large bag was placed outside, propping the door open. Then the hand luggage, carefully placed on top. I returned to survey the layout, this time, just an instant glimpse to create an image of completion to comfort and dissuade any potential worries during the journey. With one leg in and the other leaning out, I reached into my bag to locate that singular all-important document: my passport. The trailing leg edged its way to the elevator, the door shut. Locked. The elevator button pressed. Awaiting. The smell of slightly perfumed tires occupied the modestly sized elevator. Scratched silver, worn foam rubbings etched across the notice panel, new information pervading: scent, 3 up and 3 down — ground floor — exit — Bing —  doors opening.

Tris Vonna-Michell was born in Rochford, UK, in 1982. He  lives and works in Southend-on-Sea, UK.