David Robbins: Where did you find this Rat Fink1 model?

Steven Parrino: Up on St. Mark’s Place, at an antique toy store that was only open for two months. They had this one, plus another Rat Fink riding a motorcycle. I wanted to get them both, but at the time I didn’t have very much money. I only had two dollars on me, and the thing cost twenty-five bucks.

DR: So they had to hold it for you! Even better!

SP: There was of course the big question as to whether or not to buy it. Did I want to spend twenty-five dollars on something that could be so stupid? And yet I had this need for it. It was like coming across the Venus of Willendorf in an antique store for five dollars — any archaeologist would have a heart attack. That’s the way I’d equate it, because it had become so precious an icon. There was something in the back of my head that said, “You can’t be serious! It’s too stupid. How much of a sucker do you want to be?”

DR: But the pull of personal history won out.

SP: I ran home, borrowed money from my roommate, ran back, and bought it. I brought it home and opened it up and saw that it was still safely encased in the plastic bag, still stuck on the plastic tree.

DR: Pristine, as it has remained to this day, I see. How long have you owned this thing?

DR: And you still haven’t put it together….

SP: I just can’t. I wanted to build it but I just couldn’t bring myself to do it. It’s still in the embryonic sack.

DR: Oh! The ruby eyes just fell out of the embryonic sack! There’s a leak.

DR: Here they are. I see on the box there’s a picture of Ed “Big Daddy” Roth, wearing his hillbilly dunce cap and standing by a washtub. Big Daddy’s wearing two different shoes…

DR: Like Rat Fink, those stickers were all over the place in the mid-’60s… Why is Big Daddy dressed as he is?

SP: Big Daddy was the beach guru. He had a very elegant little goatee. He was the guru of the redneck beach scene. He did the paintings of Rat Fink and other custom monsters on surfboards and motorcycles.

DR: The language on the model box is terrific. “A full six-inch figure of Ed Roth’s famous Rat Fink.” Famous among American teenage boys, that is. A giant rat with bulging eyes is their hero! “It goes great with model car displays and other monsters.” What a strange macho trip: full force dragster macho with this Rat Fink chaser! Why was Rat Fink so cool?

SP: Because it was nasty. Rat Finks existed to disgust, as dragsters did. Burn rubber! Look at the picture of Rat Fink: he’s got a lot of flies flying around him, he must smell bad. To my mind, that’s what he is: a bad smell. I was really into Rat Fink culture when I was a kid. You’d sit in class, bored out of your skull, and draw dragsters. Right before the Troll Doll came in everybody collected the Rat Finks.

SP: Right. It only started two years before that. It started as airbrushed illustrations on the sides of vans.

DR: “Revell Custom Monsters” the manufacturer says on the box. Why were monsters so important to these people?

SP: They are for us too. We still go to see horror films in order to get scared to death. The cult of the monsters continues. It’s a way for people to approach their fears without getting hurt. They see themselves in the monsters. The vampire, for example, a creature like a leech, represents the way we live off each other. People go to look at themselves, ultimately.

Rat Fink was always there in my childhood, among the things that I grew up with. My mother always yelled at me because I was always drawings skulls and crossbones. She wanted to know why I didn’t draw happy puppy dogs. When Led Zeppelin came along and brought in witchcraft imagery, I thought that was great. In the early ’70s there were a bunch of movies that were really violent. Bells would go off in the theater to warn you when a really sick part was coming. Or they’d pass out barf bags.

DR: Yes, I remember: Mark of the Devil, a really disgusting mid-’70s film about torturing witches or some such nonsense.

SP: I have a drawing about it. I used the ad of the girl getting her tongue ripped out. I want to reuse what I grew up with. That’s what culture spit at me and I have to deal with that and clarify why these things existed. Why did I grab onto them? Why did punk culture happen right after that glut of horror movies and snuff films that came out? Sid Vicious was the personification in ’76 of those films. Disgust at the farce. We had to learn not to care so much because earnestness was crushing the life out of us.

DR: So where does Rat Fink fit in all this?

SP: He’s the reminder of the whole problem. It’s like having a videotape of Mark of the Devil. I need the original impetus that started my whole way of working, in order to keep it going, and if I can find those objects that started it then it’s almost guaranteed!

DR: But why such a fascination with this grimness?

SP: Part of it goes back to rock and roll. That rebel thing, the underworld, the underground, dragsters. An underworld that also included vampirism, cannibalism, zombies and all that. Led Zep was a witch cult with witch symbols… a few months ago that kid on meth who wound up gouging his friend’s eyes out… angel dust and AC/DC… This is something that’s definitely out there, at least where I grew up on Long Island, which is not very different from any other American suburb. The little girl across the street had a subscription to Vampirella magazine.

SP: I still have my Dark Shadows plastic fangs. I keep ’em with my rosary. Going to see these movies, buying these records — it’s a conscious form of rebellion. And then I started playing rock ’n’ roll, so it really got out of hand. I started evolving a look in high school. When punk hit, that was it, praise the Lord. Modernism spins in its grave.

DR: Did you cut all you hair off?

SP: I was more healthy than that. Plus Sid took care of self-mutilation for you. I tried to be as gross as possible, but quietly. At the time, I always wanted to be considered as the quiet kid in the corner who could have killed his parents. It was all pose, the thing to do when you’re eighteen. I love my parents. They’re wonderful people. I’m proud of the fact that I don’t have any problems with my parents.

DR: Well, I wish you’d put this Rat Fink model together. You’ve got to consummate the purchase! What color would you paint it if you were going to put it together?

SP: I’d just leave it white, like the Venus. It’s the same shape, almost, that pear-shape of the Venus of Willendorf. Perhaps I’d chrome it… Anyway, I don’t want to unleash it just yet. It looks so good on its plastic tree.

DR: Two years is hardly rushing into it…

SP: Every time I walk into my studio I build the Rat Fink. Since the death of painting everyone has been fucking the corpse. When I work I’m like Dr. Frankenstein, reconstructing the corpse or pulling many dead ideas into one whole. This is a scientific reconstruction but full of horrible doubt that what I do will get out of control. I mean, what happens if I get my hands on a bad brain?

This conversation took place in New York in 1984.

David Robbins is an artist and art historian based in Milwaukee, USA. His most recent book is The Velvet Grind: Selected essays, interviews, satires (1983-2005), Zurich, 2006.

1. Rat Fink — the most popular and enduring of several imaginary hot-rod characters created by Ed “Big Daddy” Roth, an originating artist of the early ’60s Southern California car, surf and skateboard aesthetic — is a pot-bellied, depraved-looking mouse with bulging, bloodshot eyes, an oversized mouth with yellowed, narrow teeth, and a T-shirt with “R.F.” on it. 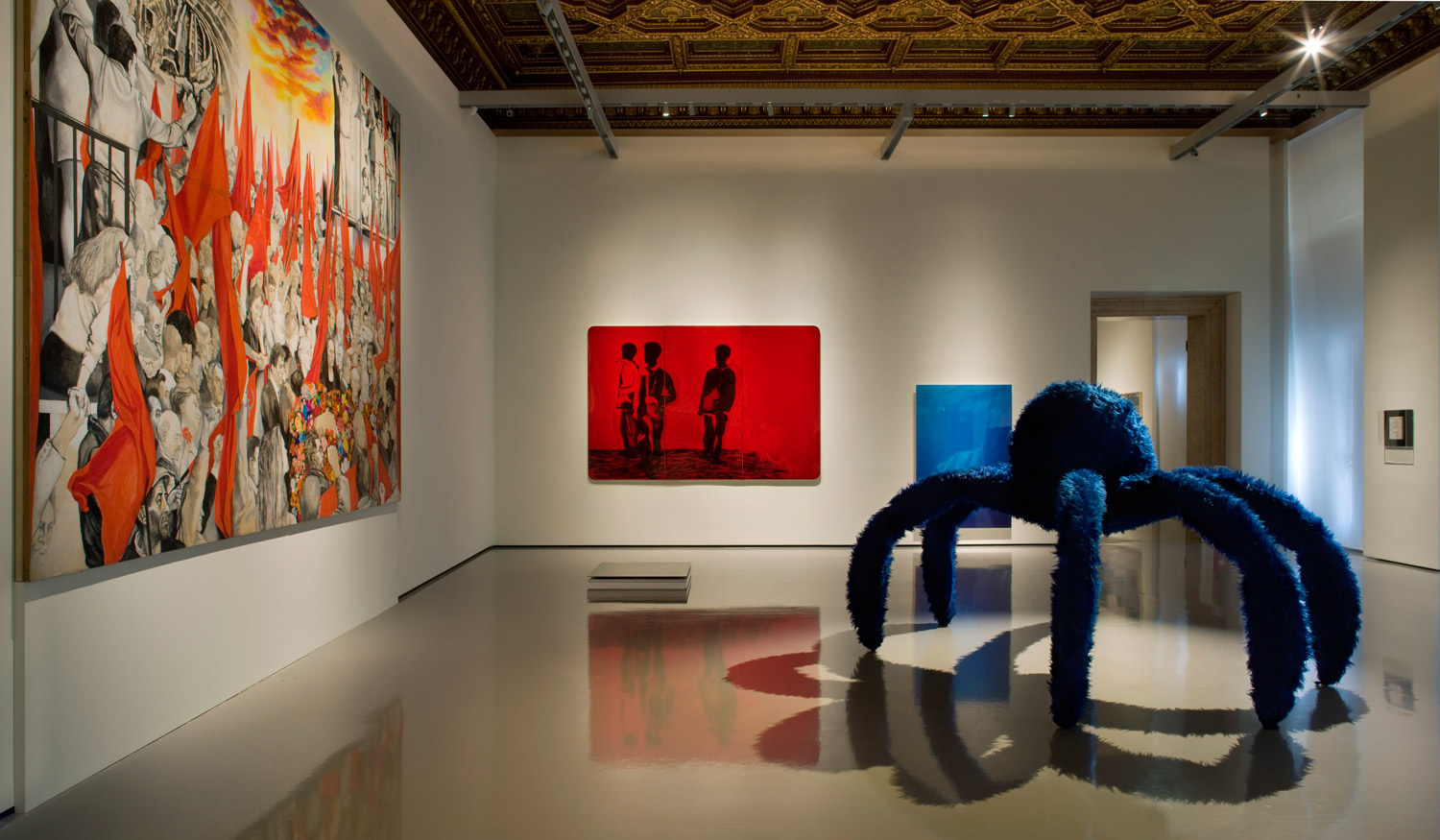