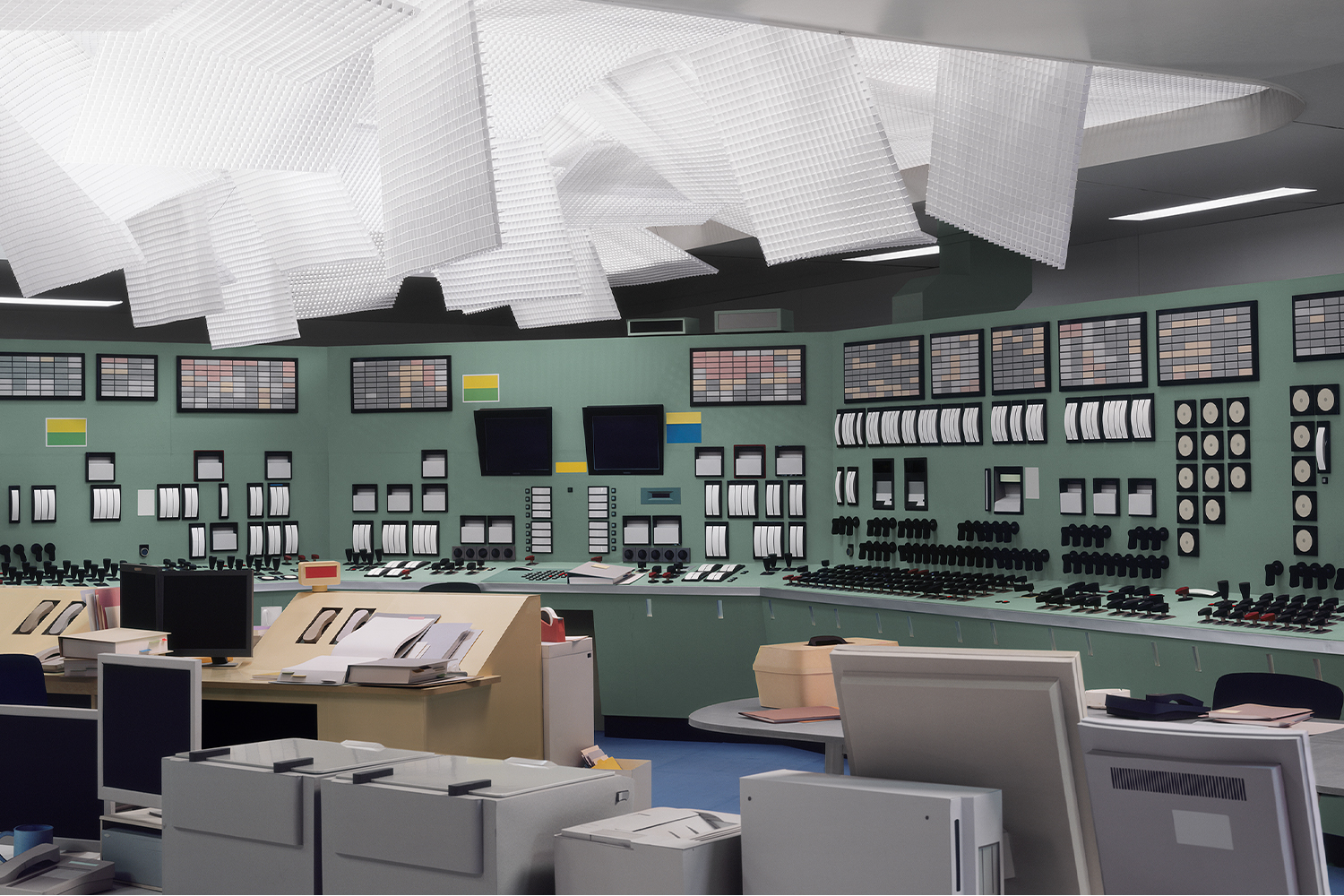 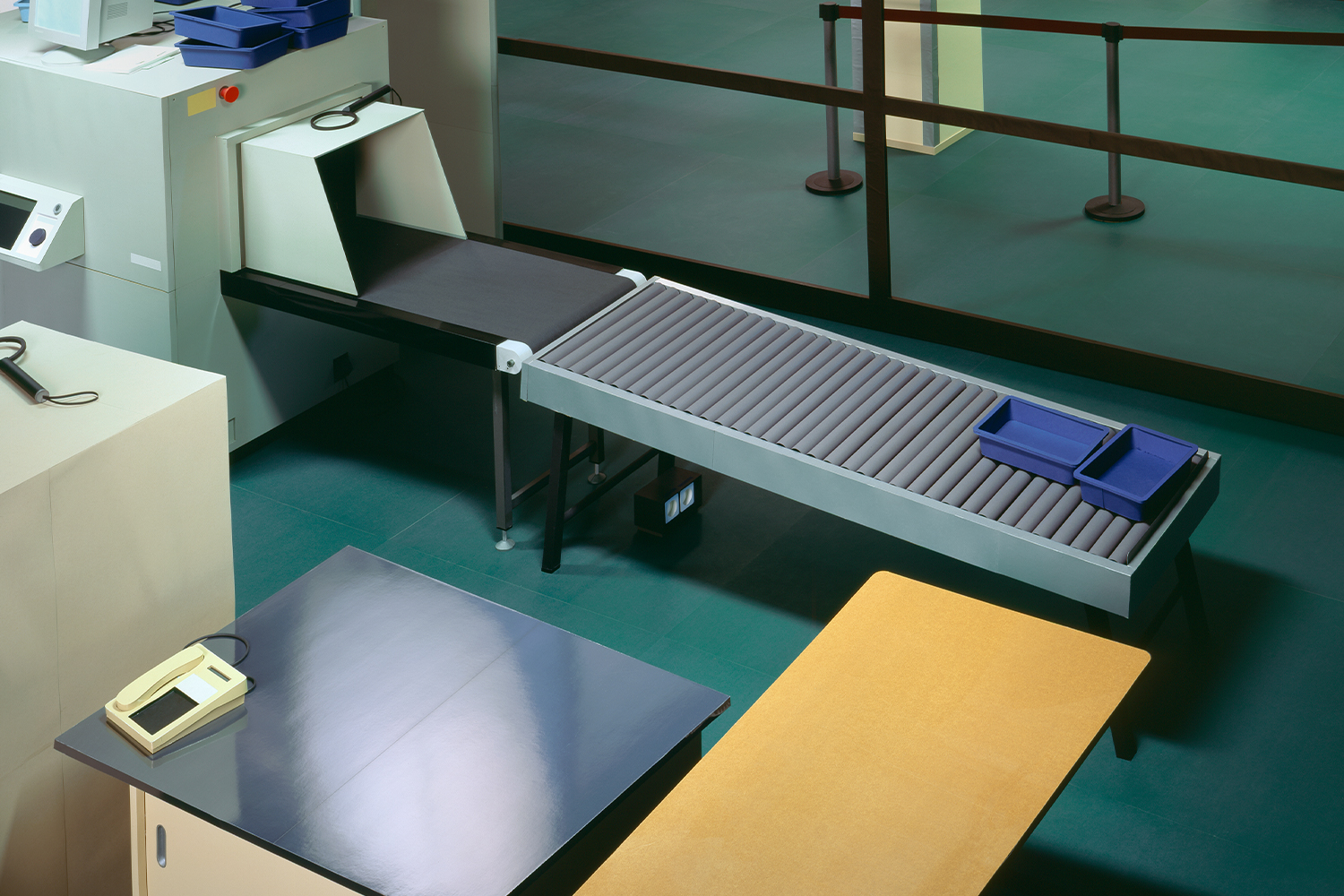 “Hello everyone,” says Katya Inozemtseva, chief curator at Garage. “Very nice to at least see you digitally.” She keeps one hand in her pocket as she blinks and then half-winces over the words see you digitally. The camera is rolling but her palpable preference for a live audience (a “real” audience) is tangible, and renders her at once convincingly real and strangely artificial.

It’s a fitting reception to this new retrospective from Demand, whose oeuvre has long picked at the media- saturated seams of life to focus on the tension between so-called truth and so-called artifice and the disjunctions found therein. His process is as follows: an image is found — often a heavily circulated image or loaded with some other sort of gravitas — and reproduced fastidiously — in paper — before this model is captured (often at immersive scale) and destroyed so that only the image of a construction remains.

As a process, this is not so unlike memory. Or filmmaking. Propaganda. Social media. Thinking. And aren’t those all the same thing now? And then there are the economic models, architectural, sociological, and medical models, and the simulations we produce and discard for entertainment or to map the galaxy. The human brain is in constant reconstructive dialogue with its surroundings. This is our eidos. Even in the very oldest cultures one finds rosters of replica objects for burial or ritual destruction to release the spirit or aid it on its way.

So, never mind whether sculptor, filmmaker, or photographer; if Demand must be marked for anything it must be for his singular obsession with this procedural formula behind everything we do: construct models of reality, extract information, and then dump both models and originals so that only the image of the image might live on. It’s written into his character. And ours too. 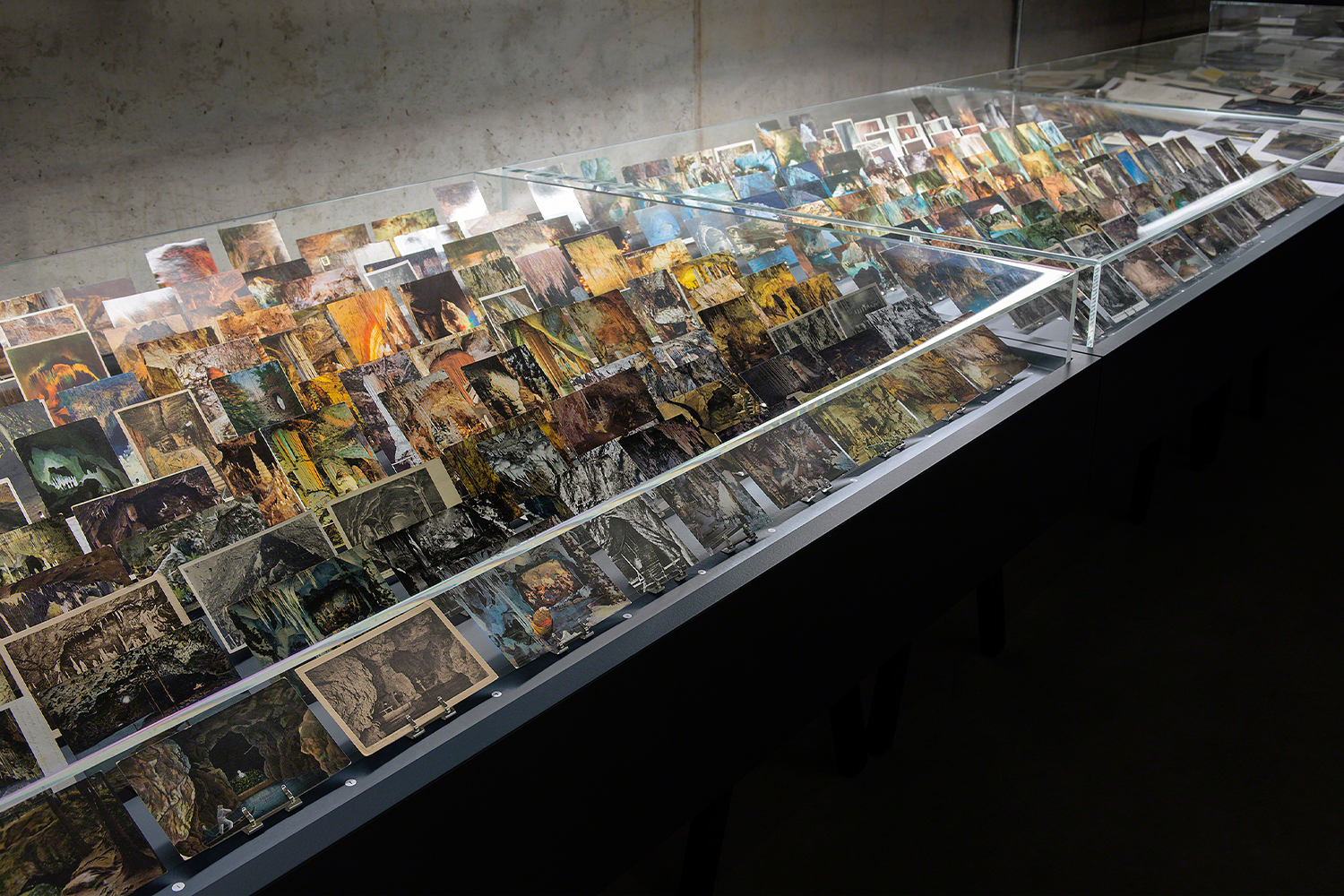 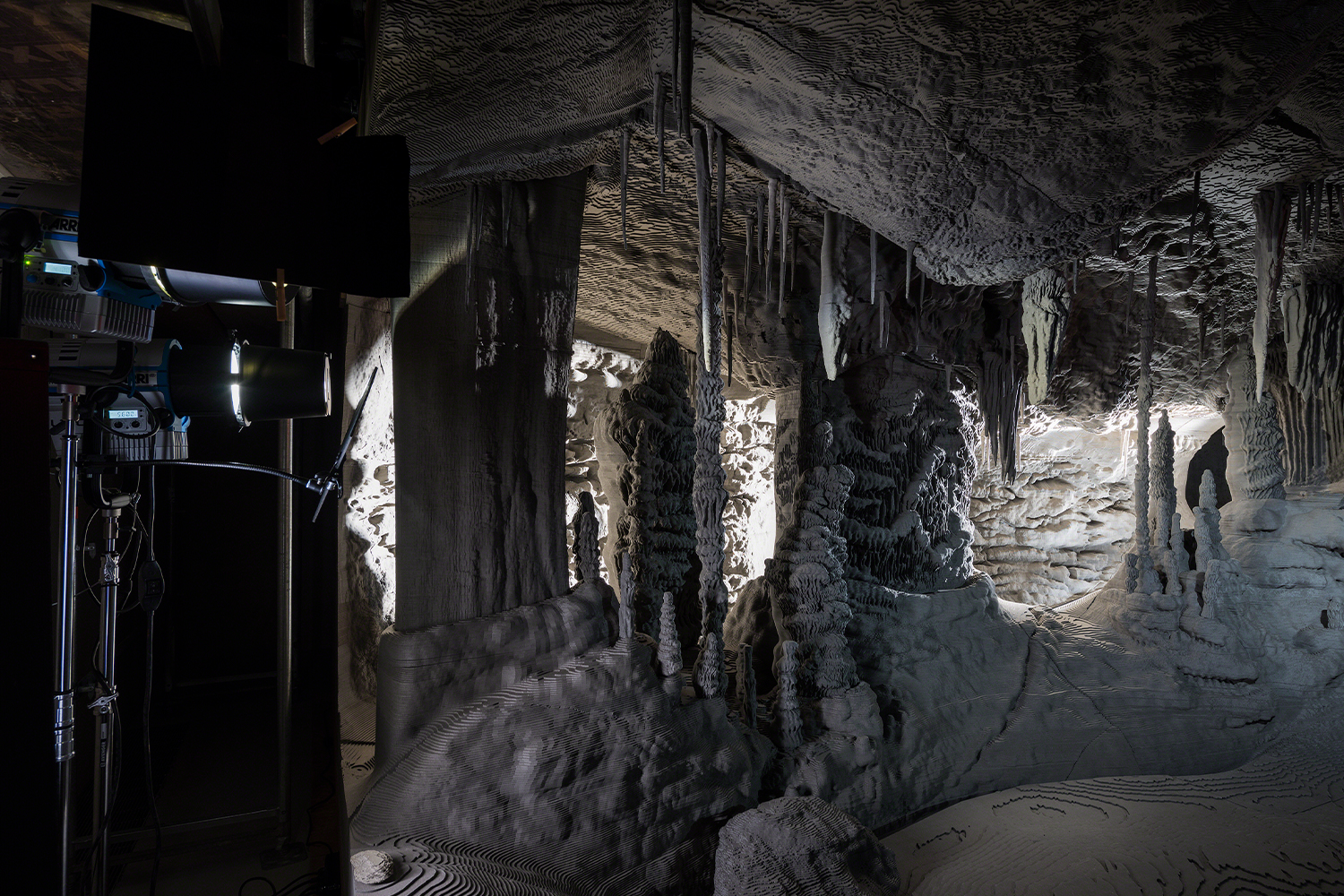 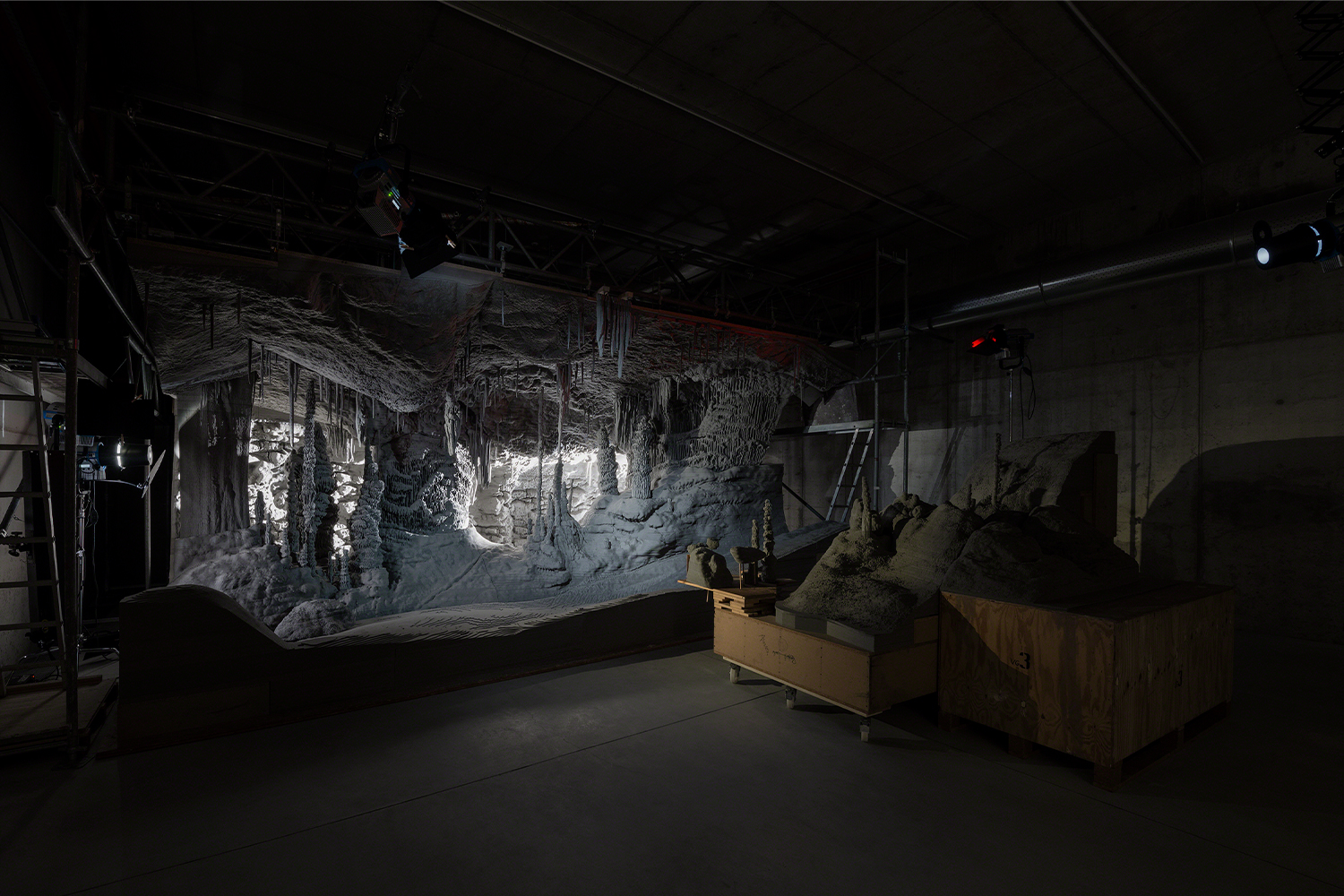 “We look through models onto the world and have to realize that these are constructions,” Demand has told interviewers many times over. Throughout the course of a career spanning more than three decades, the artist has rarely shown his own models, preferring to hint at their materiality in his photographs instead: small wrinkles or gaps left visible, the odd smudge or pencil mark. The exemplar exception is his transportive 2006 work Processo Grottesco, permanently held in the basement of Milan’s Fondazione Prada after Demand was convinced to keep and exhibit the model and supporting materials by the institution upon commissioning Grotto (2006) for another site in Venice.

Here, the photograph is displayed first, followed by archival postcard prints and analysis of the original grotto in Mallorca — arranged in analogue but not unlike an online image search — and finally the 1:1 fabricated cave, made from cardboard spat from the jaws of a 3-D printing machine and painstakingly moved — all thirty hyperreal tons of it — from Demand’s Berlin studio to be installed with stage lighting and rigging beneath the Fondazione’s main screening room. All caves are sacred, but this one is special, not least for being snatched from death by Miuccia Prada.

Like a mild psychedelic, Processo Grottesco summons fairytales, Plato, wombs, tombs, and descents into underworlds. As a site of absurdity, myth, and eternity, the collected items here offer an (un)naturally born refuge that the artist likens to a mausoleum. Entombing a studio setup beneath a cinema is suggestive too, but like all adepts, Demand refuses to delve too deep into the mysteries this axis mundi holds, though he will gesture to Kurt Schwitters and Gustave Courbet (whose painted grottos are as generative as his feted L’Origine du monde of 1866) and exhibits delight at finding the same enthusiastic guard there each time he visits Milan. “She’s still there, I mean she sits in the basement all day but she really loves her job.” He visited recently to check up on the work, since it was shut for the pandemic along with most other versions of reality.

“Every good rule needs an exception,” he says, “and that is my exception, in a sense.” 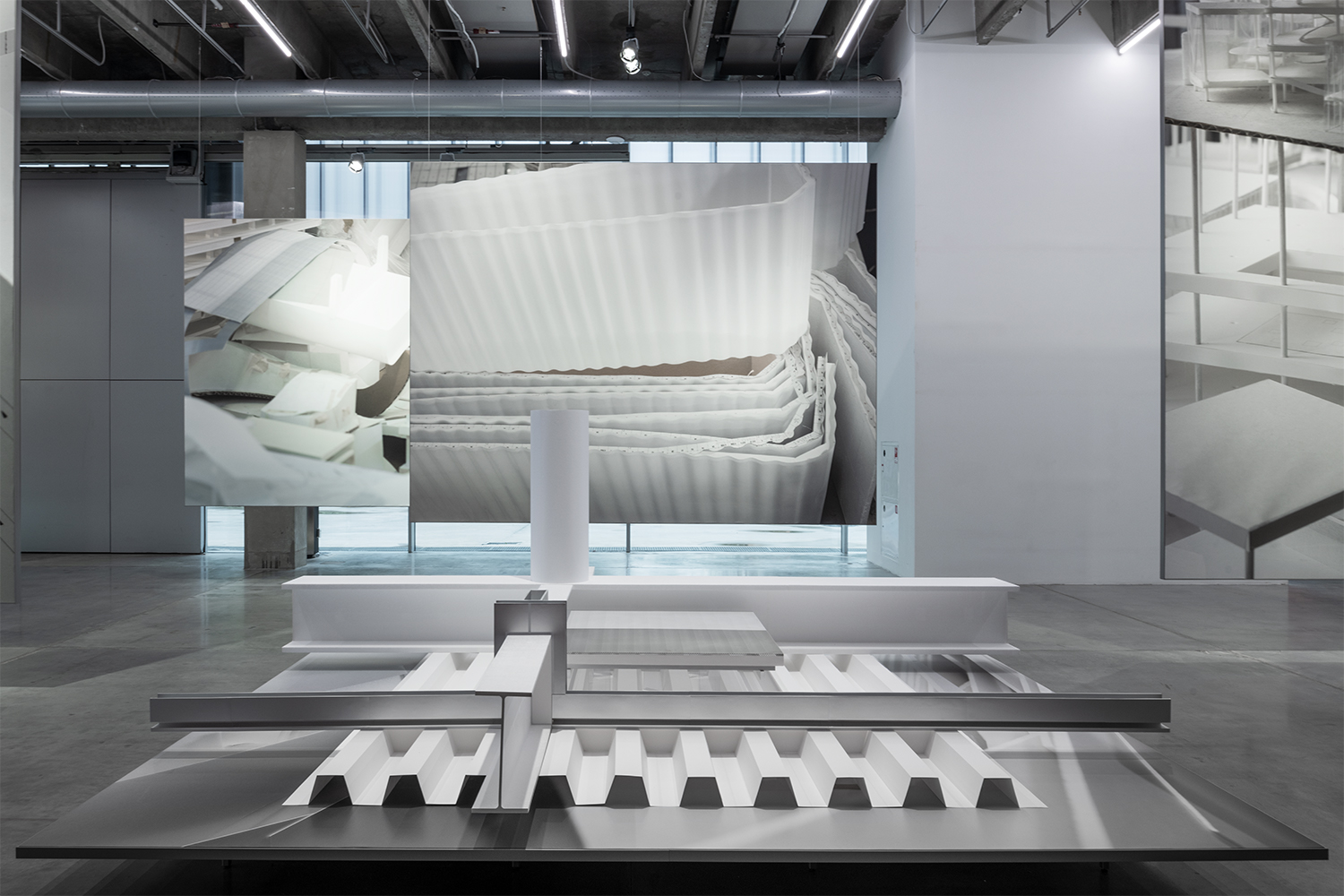 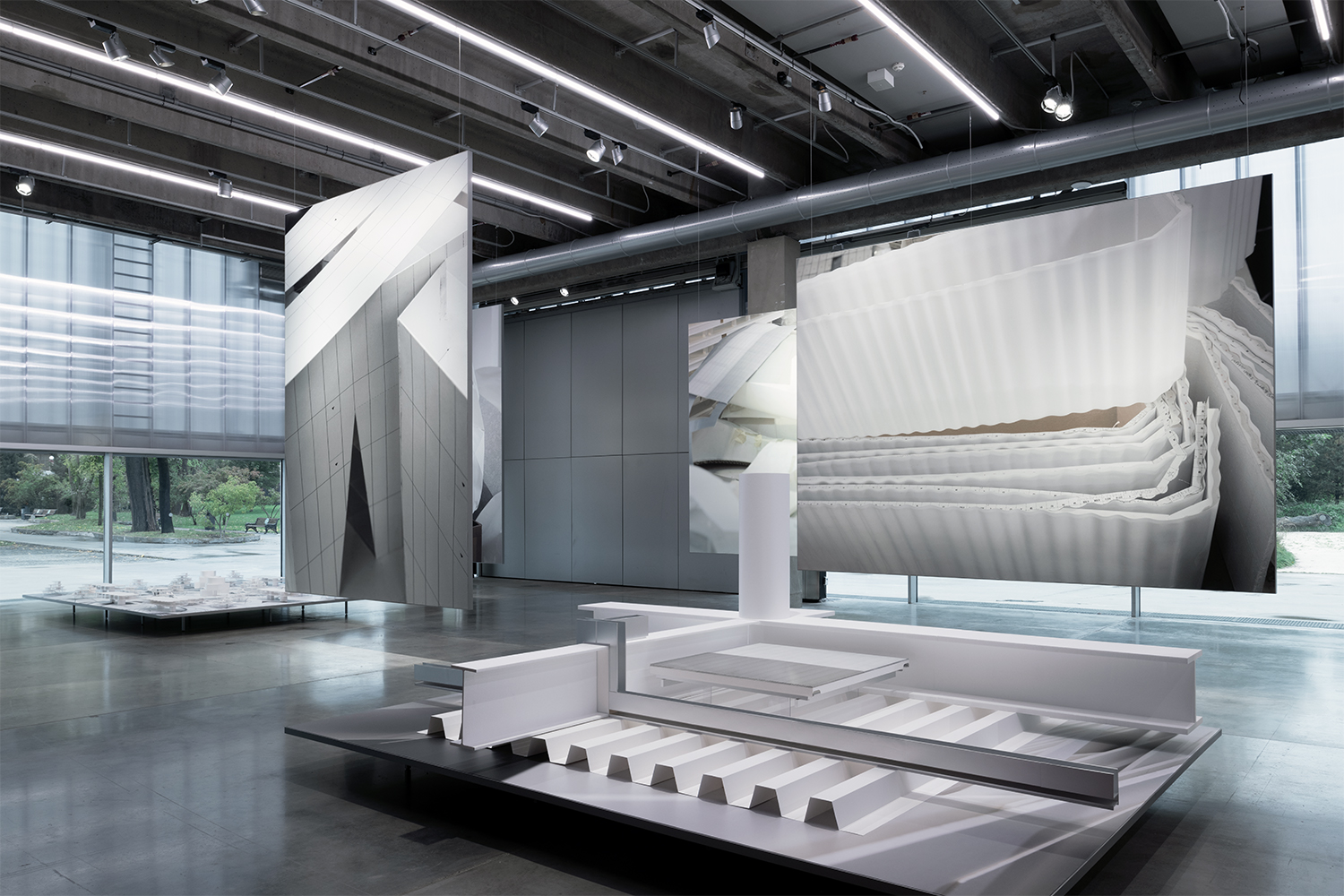 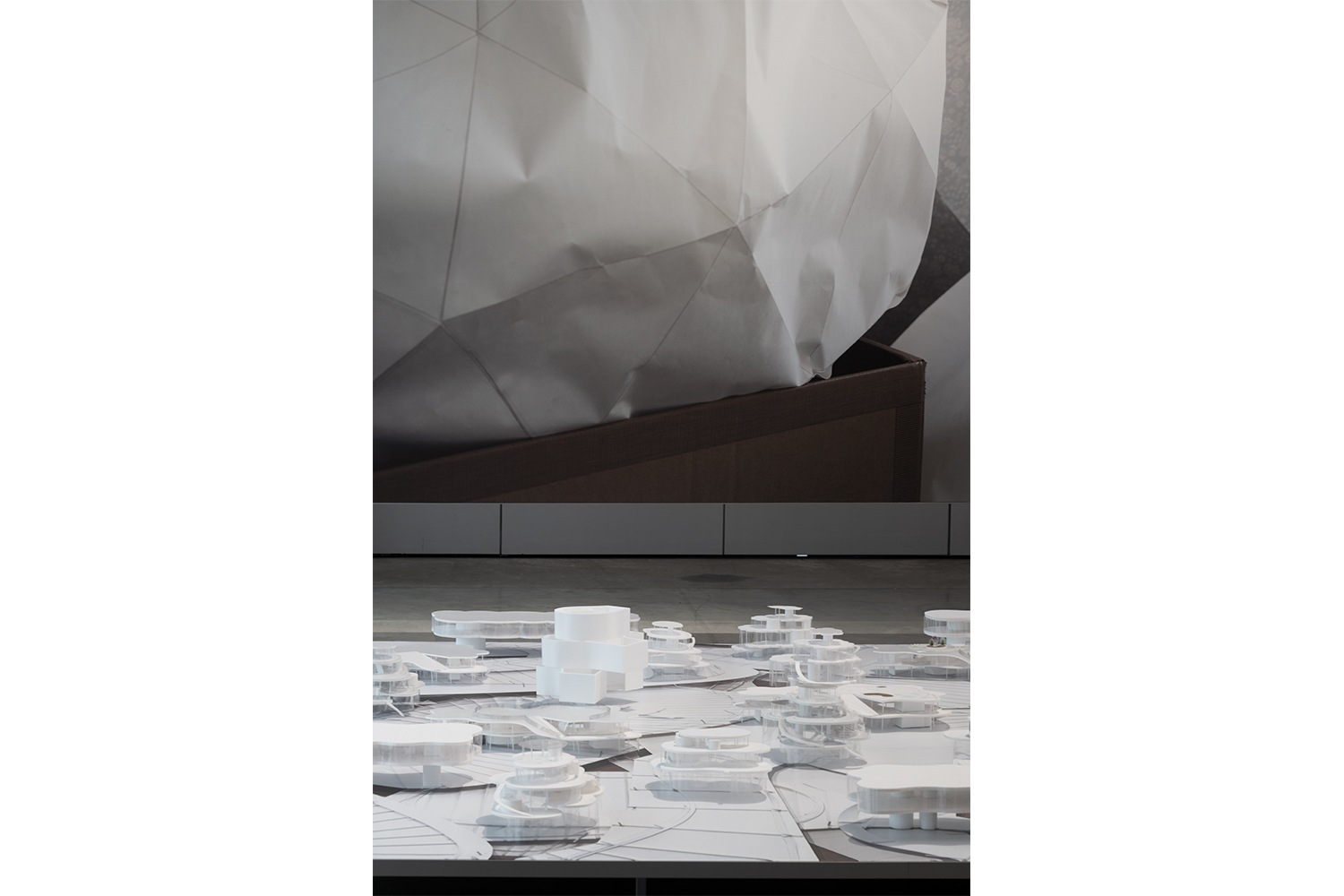 Back in Moscow, Garage Museum displays an entirely contemporary kind of cave, in a series of new works made especially for the exhibition. Refuge (2021) is described by Demand as “about a place the world hasn’t seen but knows about.” This place is the windowless room inside the shuttered Sheremetyevo hotel into which Edward Snowden vanished from the world for five weeks in 2016 after revealing the harrowing extent of multilateral government surveillance worldwide through a network of agencies including the NSA and Five Eyes. The work, Demand says, is about Edward Snowden the narrative rather than the man, and a cultural event that is interesting for being such a rare instance of news not led by imagery.

“There was no face, no personal performance. He gave all the laptops to someone else. The images are no longer a documentary document anymore. It’s more like a fictional story about somebody disappearing.”

In conversation (on Zoom at least) Demand is a generous and unassuming storyteller, pulling through ideas and experiences at a great, enthusiastic clip. He describes the “two-textured wallpaper” of the sparse, windowless room, the blue haze of the TV, the circular light like a lonely electric moon, and the ceiling “completely bombarded with little infrastructural things like sprinklers, loudspeaker, the light, air circulation — every one of them possibly a device to control a hidden camera, you know?” I do. Most of us didn’t endure the pandemic in a windowless room but likely spent a beat or two of it as the star of a story about isolation and the associated drift through waves of paranoia, malaise, and boredom with little but blue-tinted light for company. Wondering if the world is watching, wondering what else the rest of the world is going through — yes, we’ve all known this. In these circumstances one’s immediate landscape tends to take on vast narrative possibilities.

“It’s like a theater play, in the end,” says Demand mysteriously.

There are theorists — Richard Schechner and Erving Goffman, for example — who contend that everything is performance, from greetings, emotional displays, and professional roles to sport, religious ceremonies, and rites. Not to say that these interactions are inauthentic, but rather choreographed within a set of agreed-upon relationships and social boundaries in order to regulate economic, political, and religious relations between groups. This is especially true of today’s digital realms, where different models of self and identity are picked up and apart and disbanded constantly across gaming, social media (see TikTok’s “main character” meme for a playful recent example), politics, and consumer choices in a chaotic networked performance watched in concert by an audience who never sleeps. Being watched changes our actions because it changes our connection to our emotions: this is the first principle of any actor of the state or the stage. Given the context of history (both in the century anticipating Snowden and the revelations that followed him) it’s easy to see something much darker upon the lonely blue stage of Refuge.

Other works in “Mirror Without Memory” range from early student pieces (Five Globes, 1991) to more recent projects and collaborations with architects and others, notably with the filmmaker Alexander Kluge. For the piece with Kluge he built “these kind of Sputniks hanging from the ceiling” within which two or three viewers can watch three films made by Kluge from work by Demand — Ruins (2017), Five Globes (1991), and Repository (2018), the latter of which was, in turn, produced from material provided by Kluge — in safe, socially distanced, and hyper-mediated fashion: “You slip underneath on your own, with two or three other people at the same time,” Demand says.

Cinema is an important lens for the artist. He highlights the energy of the Lumière brothers and others during the medium’s first ten to fifteen years, “when it wasn’t clear yet whether it was a folly for a fun park, or theater, or a documentary device,” in contrast to the more recent dawn of the superhero movie multiverse and gargantuan blockbusters like Twister, Titanic, and The Terminal, “where the setting is basically the narrative,” drawing an obvious parallel to his own work. In these films, “you just build the world and then you look for the script,” he says. “I don’t go out with a camera. I bring the world into my studio.”

The reality slippage found in Rainer Werner Fassbinder’s seminal 1973 science-fiction title Welt am Draht (World on a Wire) also springs to mind, given its similar focus on simulation and the inhabitants of artificial worlds — and the fates of some nine thousand “identity units” living as human beings built for “market research purposes” under the gaze of their creators. “Look,” one of these creators says to another, “you are nothing more than the image others have made of you.” Model citizens.

Asked if he can relate to the filmmaker’s ideas, Demand says he grew up on Fassbinder, that his work “was an integral part of his cultural upbringing” but that any influence wouldn’t make sense until later, from around age twenty-five or so when Demand was already established as an artist in his own right. The pair belong to that staunch and interesting tradition of metaphysical inquiry found in Germany from the likes of Nietzsche, Schopenhauer, Heidegger and other identity units with noble market research purposes.

Quiet on the Set

There is a line in an old Jeffrey Eugenides short story (which happens to have been commissioned for the artist’s 2005 MoMA show), which still rings through Thomas Demand’s photographs like a stage door buzzer:

You’re there and you’re not there. And isn’t that where we all are?

Action! Where does “being there and not there” take place today? Inside or out of the mind which is inside or out of the computer? Where’s that headed? What’s the subplot? Is total immersion into simulacrum inevitable whether we like the idea or not? And aren’t each of us — with our fraying social pageantry and tattered words — already far less real than we pretend to be?

Companies like Meta (née Facebook) certainly hope we will spend more time in the virtual worlds they build for us out of the maps they make of our psychodata in an effort to “evolve connection.” Governments continue to watch us. Everyone wants to see into our windowless room. What choice is there but to disappear or pick a role? Demand’s constructed worlds remain empty of any figurative human subject and feel ever more poignant. Perhaps we’re in pieces on the cutting room floor.

“By the end of this decade, or even by the middle of the decade,” Mark Zuckerberg said recently, squinting through the tiny rectangle in his mind, “I would guess that we’re going to reach a point where our VR (virtual reality) devices will start to be clearly better for almost every use case than our laptops and computers are.”

If this comes to pass and we really do all pile into immersive headsets, we may just witness the greatest vanishing act in the history of drama. Cut there please.

Thomas Demand’s solo exhibition “Mirror without Memory” is on view at Garage Museum of Contemporary Art, Moscow, through January 30, 2022. His solo show “Mundo de Papel” at Centro Botin, Santander, is on view through March 6, 2022.

Ella Plevin is a writer based in London and Cambridge. 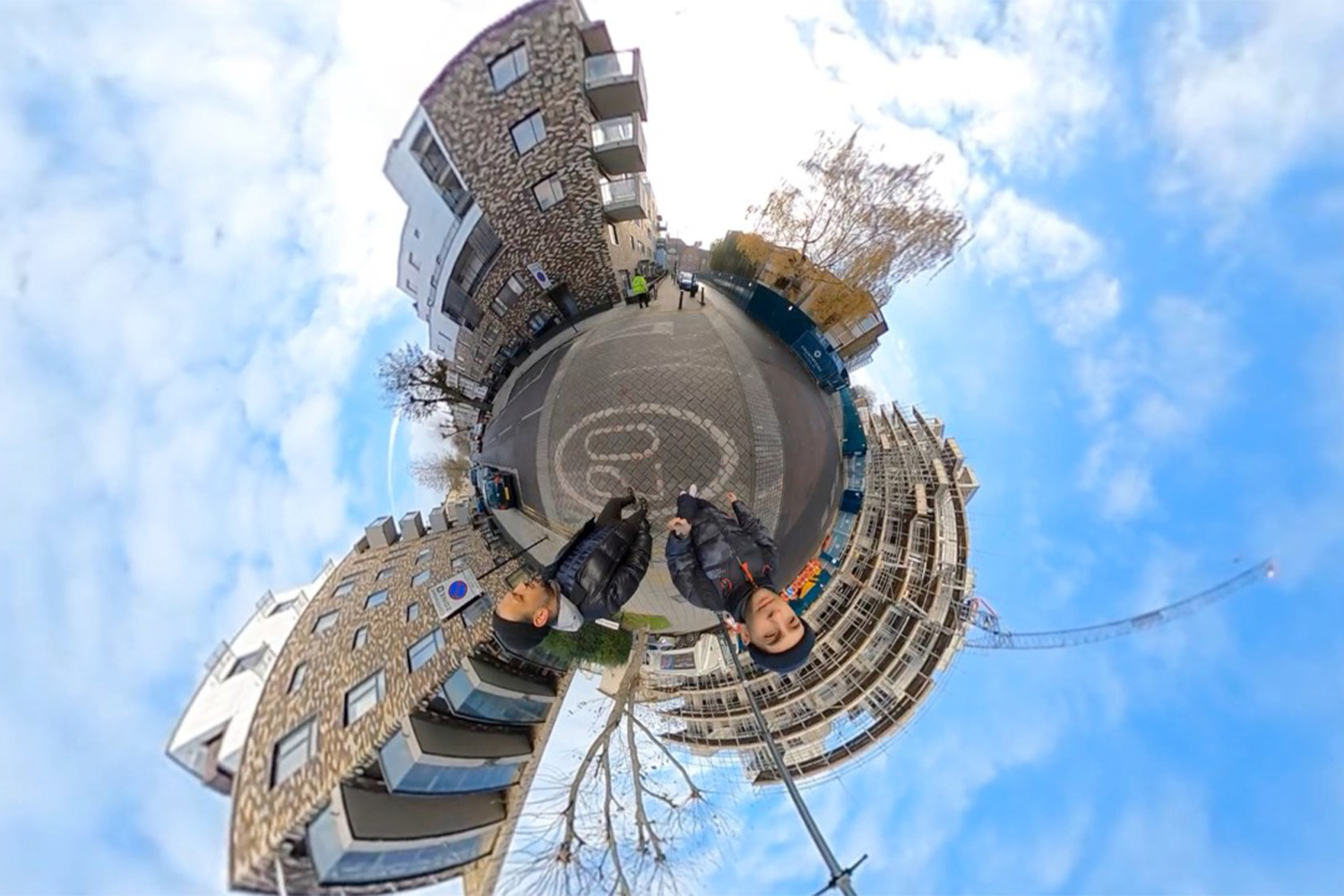 “Wearing your heart on your sleeve shows courage” – or so goes my psychotherapist’s favourite dictum. And though bravery is… 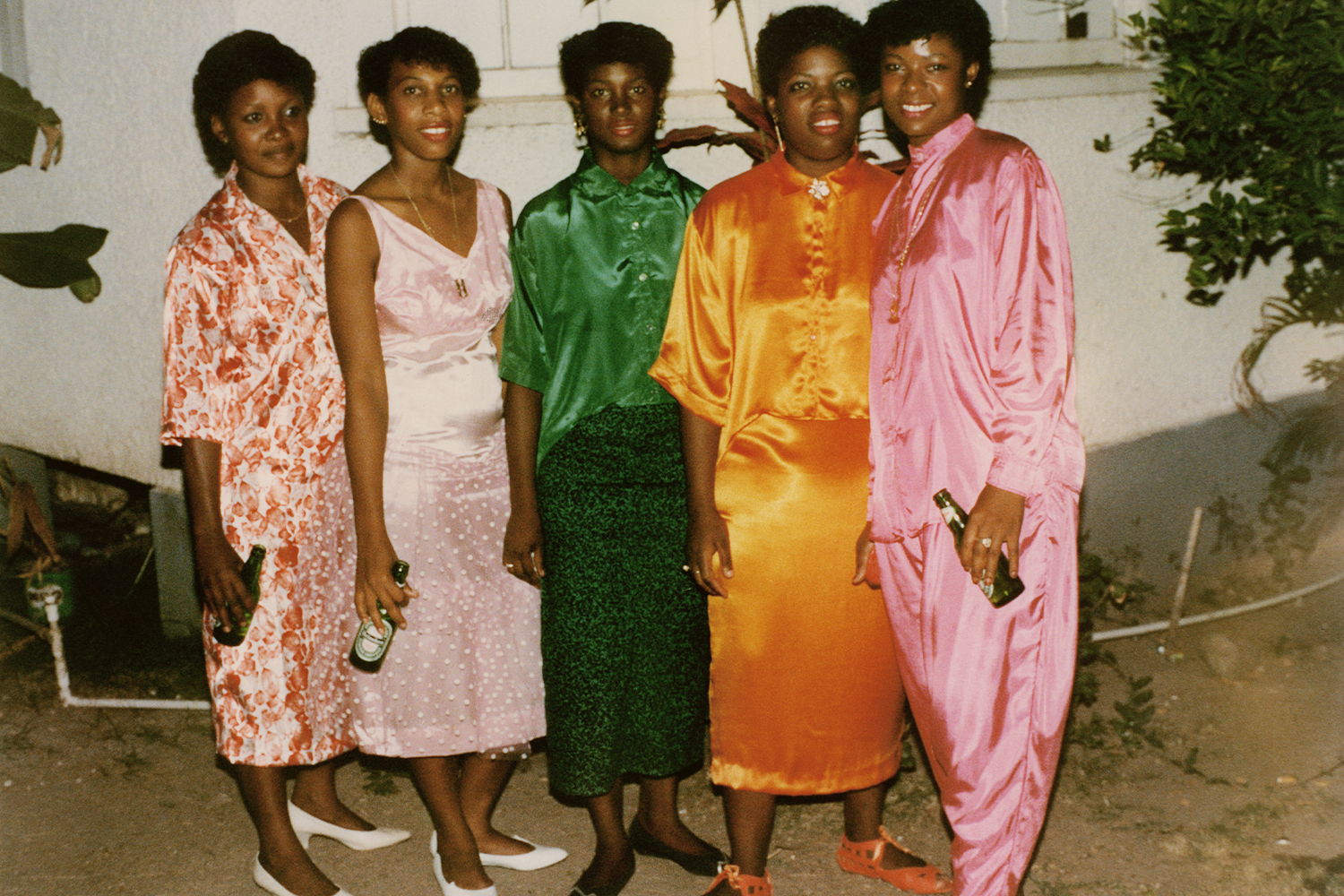 It’s hard to circumscribe a figure like Akeem Smith: fashion designer, stylist, visual artist. From an early age he absorbed… 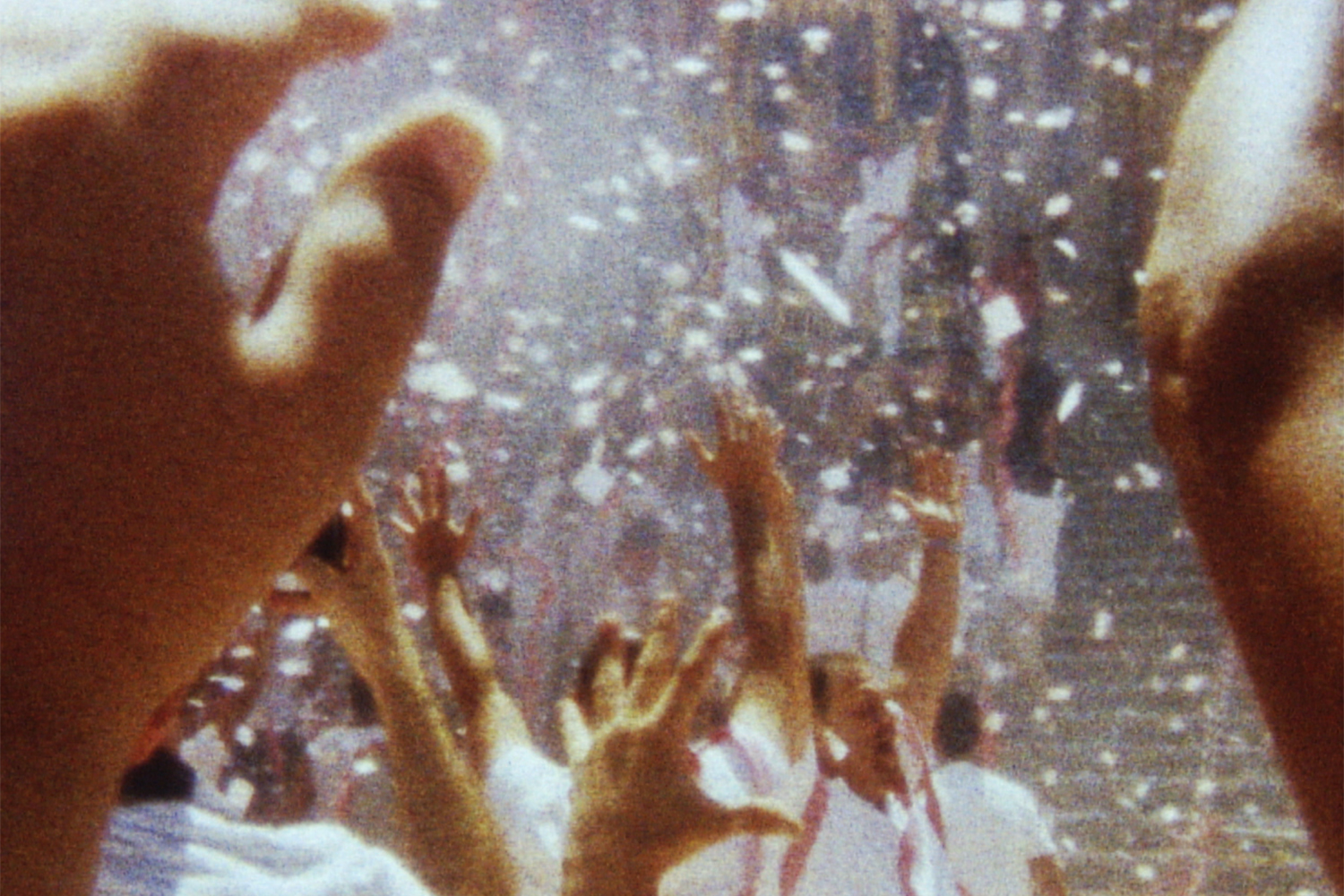 Something that interests me lately is poverty. Poverty not only as a notion, but as an experience. It seems to… 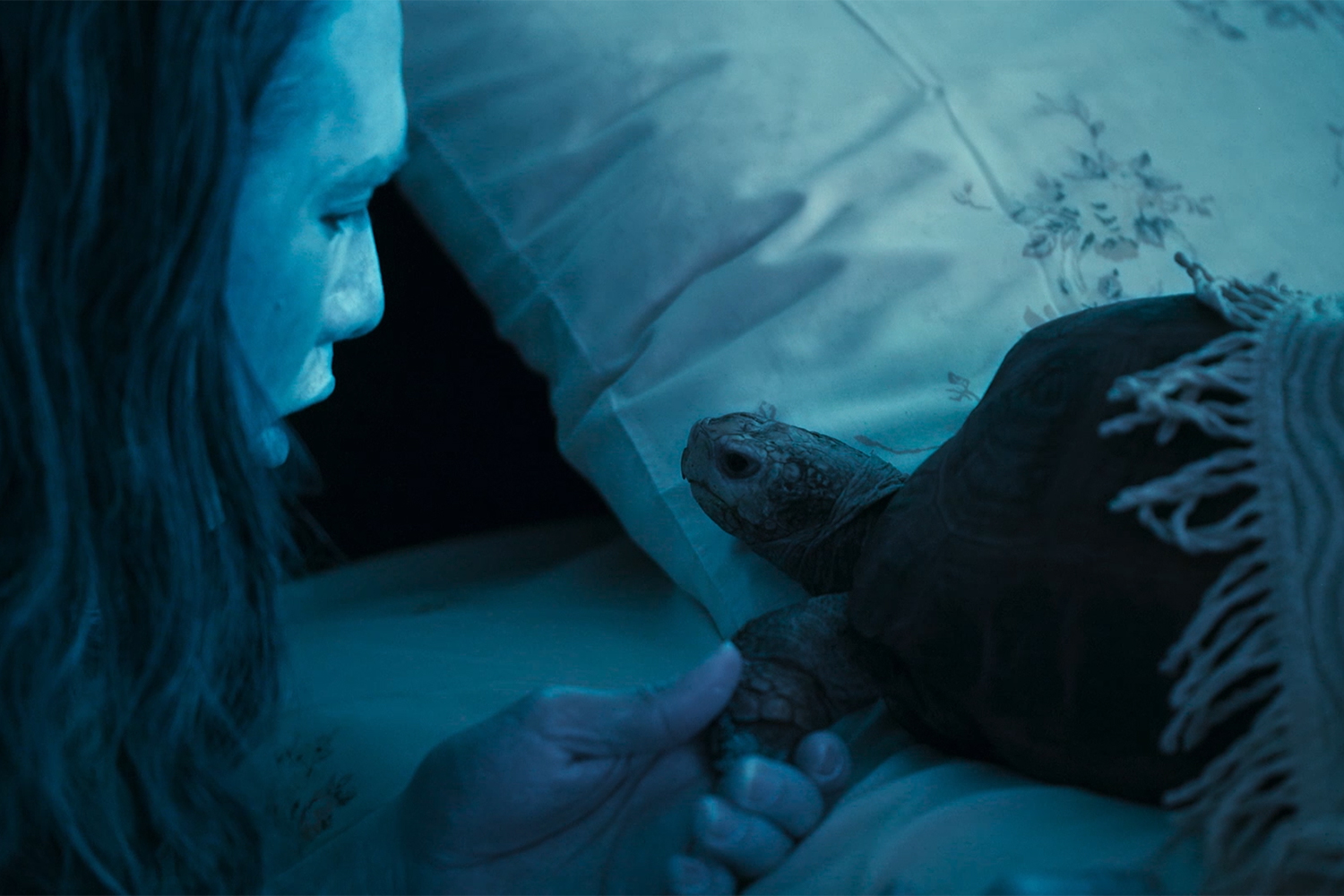 “Follow my voice,” urges the shaman in the beginning of Korakrit Arunanondchai’s video Songs for dying, 2021 (co-commissioned by the…