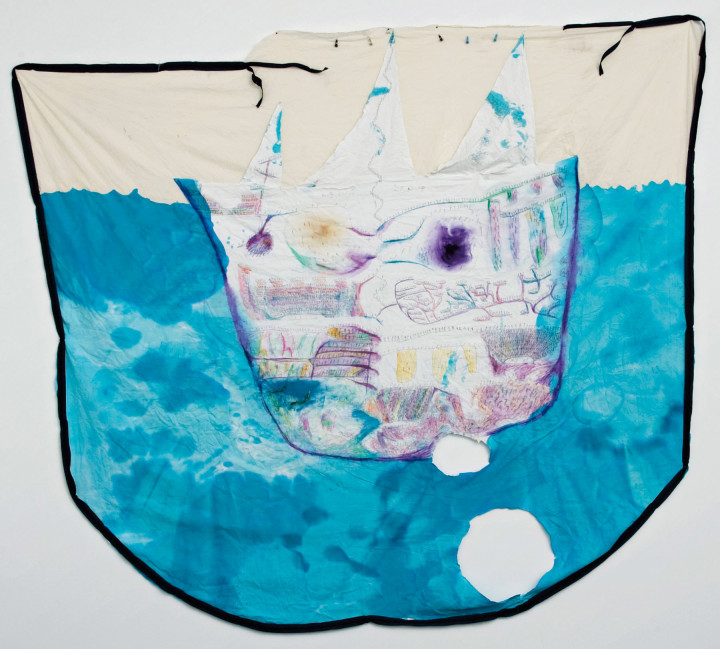 Annette Amberg: Three things come to mind when I think of your work in relation to your youth in a suburb of Basel: the Goetheanum by Rudolf Steiner in Dornach, a Kurt Schwitters exhibition at Kunsthalle Basel in 1971, and the textile factories that were booming in the mid-19th century in Alsace.

Reto Pulfer: Rudolf Steiner and the sort didn’t affect my family, although I found it fascinating to see a community of people following certain ideas in architecture, morality, food and art throughout their whole life. I am fond of Schwitters, as he too worked crossover in many disciplines.

AA: Could you tell me more about the way you use textile and color in your work?

RP: Quite a number of the textiles have been used in either my home or someone else’s.  I then color these second-hand textiles. For a while, all I would do were turquoise works that would mainly recreate personal experiences of being in nature or underwater. I do not look at the whole composition but only work on the details with a set of colors I decide upon in advance. I sometimes think of it as being like certain experimental films, where the subject and place are more important than the camera. The choice of textiles is also a practical one: a stretched canvas is mostly rectangular and cannot be folded.

AA: I often wonder, which comes first: the textiles, the sculptures or the titles?

RP: I am a gardener of an imaginary garden. It is not so much about real places. Each nail and pencil and piece of wood has its own quality.

AA: The environments you create have a very specific order. Where does your interest in (language) games come from?

RP: Before I make new works I invent stories — so-called mnemonics — that inspire me. Many works are in themselves structured like games: they can be installed in different ways, and the language is there to define the rules.

AA: There is a constant transformation within the specific and very subjective system you set up in your work, ranging from language, to object, to music, and back. To draw an analogy with the realm of the cinema, it’s like an 8 mm film being transferred to VHS, to DVD, to Blu-ray, and finally to YouTube. It’s interesting to see how everything comes together in your performances.

RP: Yes, that’s true. A performance can really add the tip to the pyramid, while color, material, language, sound and imagination are its stones. There are also things I can’t control: context and the audience (part of the same pyramid.) What I am most concerned with is how the work appears and forms in your mind in the first second you look at it — as if you had entered a room and not even looked consciously at the art. It’s that subliminal quality I seek; it’s the music in the elevator that makes you shop.

Annette Amberg is an artist and assistant curator at Kunsthalle Basel.

Reto Pulfer was born in 1981 in Bern (CH). He lives and works in London and Arlesheim (CH).