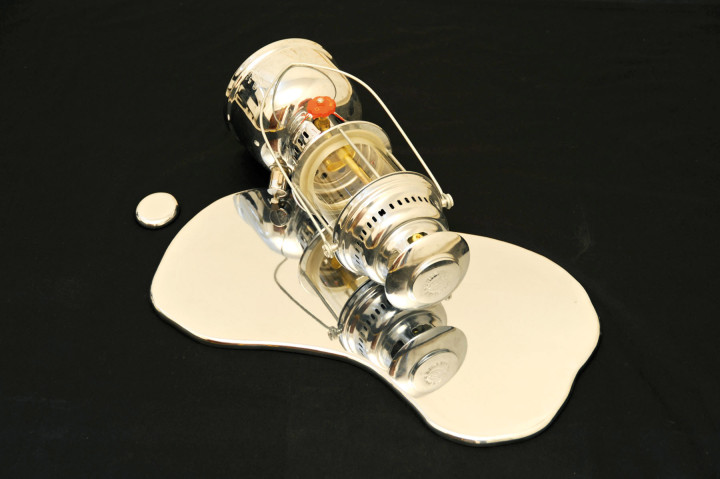 Merrily Kerr: What brings you to New York?

Los Carpinteros: We’re designing the set for a ballet performance by Morphoses/The Wheeldon Company.  Using windsocks filled by fans, we’ll play with the drama of Rachmaninoff’s “Suite for Two Pianos.” We’re combining the technical and emotional, a bit like at the airport, when windsocks are the last thing you see before you leave the earth.

MK: How has the difficulty of traveling to the U.S. affected your work here?

LC: After 9/11, the interest in Cuban art calmed down because visas were impossible to get. So while our work kept developing in Europe, South America and Asia, we had to arrange our last exhibition at Sean Kelly Gallery by email. When we do an exhibition, we like to touch everything, and this was too cold.

MK: If less of your work is handmade, will your name become meaningless?

LC: By now, Los Carpinteros is like a family name, so it won’t grow old. Originally it didn’t just refer to woodworking; we were acting as outsiders to the art scene, which made a lot of sense in the ’90s when censorship was an issue. We’ve actually been given a new label in a book project with Thyssen-Bornemisza coming out in May: Post-Industrial Craftsmen, which describes how we use industrial and prefabricated sources and craft them to our inventions.

MK: What do you still make by hand?

LC: The exploding rooms, for example, are still a labor of craft. Our work has always been about constructing, but for these we deconstruct a fragment of architecture making it both alive and static. When we showed a version of the piece in Prague in 2005, we didn’t want it to carry political overtones of the fallen Berlin Wall, so we decided to include furniture, making it unclear whether a storm or bullet had struck.

MK: Do you suppress politics in your work?

LC: We did our most politicized work in Havana when we exhibited a functioning lighthouse lying on its side in a dark gallery. We expected this symbol of fallen power to be censored, and were surprised when it wasn’t. Making political work can be addictive. They say that creation is an allergic reaction to reality. When you have a political situation you have a lot of opportunities to make political work, but we don’t abuse it.

MK: Do you consider how people from different cultures will interpret your work?

LC: It’s always a surprise. We try to choose the most polysemic, works. A piece might be understood completely differently in Cuba, South America, Asia.

MK: How does this apply to the humor in your work?

LC: It’s one of the most difficult things you can imagine to make a joke, especially because we don’t use human figures. Creating humor with cinder blocks, for example, is a challenge. We had an idea for a series of one-roomed hotels, which turned into a drawing illustrating an actual proposal in Athens to construct brick caravans to house gypsy families. The idea is heretical, but our work doesn’t judge.

Merrily Kerr is an art critic and the founder of New York Art Tours, an agency based in New York.